"You're Getting Killed Here"

Mubarak asks World leaders to save him & his family 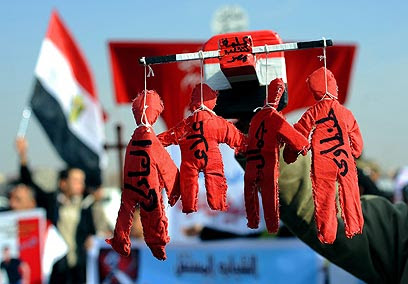 Israel Matzav
Verbatim Post
Egyptian daily Ruz al-Yusuf reported on Saturday that former Egyptian President Hosni Mubarak has asked nine World leaders to intervene to allow his family to leave Egypt and to save his life.

In the letters, which were most likely addressed to the United States, France, Britain, Germany, Saudi Arabia, Kuwait, Bahrain and Lebanon, the ailing Mubarak pleaded with the leaders to mount pressure on Egyptian authorities to allow his two sons, Gamal and Alaa – who are also facing trial – and his wife to leave the country without being sent to jail.

Mubarak also reportedly plead with American officials to dissuade Egyptian authorities from sentencing him to death, claiming that the current rulers of Egypt and his historic rivals – the Muslim Brotherhood – will not allow the court to acquit him.

Well, I hope he's not expecting Obama to save him.
Posted by Brock Townsend at Saturday, January 28, 2012 No comments:

I want this guy on my side

The American Tradition Institute (ATI) is going after 12,000 emails sent or received by Michael E. Mann while he was on the staff of the publicly-funded university. Mr. Mann is famous for coming up with one of the “tricks” used to “hide the decline” in global temperatures. On Wednesday, ATI released a small selection of emails it hopes will convince a Prince William County judge that full disclosure of the rest is in the public interest.

In March 2003, for example, a trusted colleague of Mr. Mann’s emailed to find out how the UVA professor arrived at his conclusions. Mr. Mann admitted he was missing crucial data and “can’t seem to dig them up.” Though he was working on this project on the taxpayers’ dime, he provided the information for the researcher’s personal use only. “So please don’t pass this along to others without checking w/ me first,” Mr. Mann wrote. “This is the sort of ‘dirty laundry’ one doesn’t want to fall into the hands of those who might potentially try to distort things.”

David Schnare, a scientist and lawyer who runs ATI’s Environmental Law Center, said he was shocked that anyone claiming to be a scientist wouldn’t keep a detailed log of his research activities. “In science, there is no dirty laundry,” Mr. Schnare told The Washington Times. “Science progresses by proving to yourself that you were wrong, that your hypothesis was in error. Every time you’re wrong, it means you can cut off some area of research and start on a better one.”

Picking The Measure That Supports The Myth

I cannot help but notice that the progressives and their media lackeys are inconsistent in the way they choose to express things.

For instance, a year or so ago, they were wailing about the “obscene profits” made by energy companies, in particular Exxon-Mobil. They consistently made their “case” by stating the profit in question in total dollars. Measured this way, the total (in the billions) was indeed impressive. However, when that same profit is restated as a percentage of return on equity, it turns out that the energy companies are really not all that profitable. The “obscene” profits turn out to reflect the size of the companies, in other words, the amount of dollars they are putting at risk in the conduct of their business. No bank or pharmaceutical company (for instance) could exist on the profit margins produced by the energy companies.

Now, the issue of the day is “tax fairness”. So, are the progressives consistent by measuring “fairness” by stating the issue in total dollars? No. Instead they use the nominal marginal tax rate, stated as a percentage. Stated such, we find that Mitt Robamany paid just less than 15% last year while “hard working people” might have paid as much as 35%. Clearly unfair – right? However, if we study the same issue using total dollar amounts, we find that Robamany paid over $3 million in income taxes while about 47% of workers paid $0. Clearly, Robamany (and other wealthy people) are each carrying the tax load for hundreds of people. But the progressives find nothing at all unfair about this because we all know that the wealthy need to be punished for their success.

Indeed, the basic mantra of the progressive movement is Reward Failure, Punish Success. How then can anyone be surprised that we are evolving into a nation of failures who are reduced to dependence on government?

PS: Please do not interpret anything said here as support for Robamany. What I support is truth.

Interested in turning an old tobacco barn into a "man cave"? You can learn how this spring at Edgecombe Community College.

In response to local demand, the college has developed several new courses in the historic preservation trades program, including "Preservation of Farm Structures" on March 17-18 and March 24-25.

Kevin Wilson, owner of Timberfab in Tarboro, will teach methods of preserving historic dependency buildings, like tobacco barns and other barns. Benjamin Curran, historic preservation instructor at ECC, is co-teaching the class. Students will visit several nearby structures and work on various ways of stabilizing the buildings.

"Preservation of Farm Structures" is among 13 weekend historic preservation trades courses that will be offered on the Tarboro campus this spring.

In addition to a certificate that can be obtained through six weekend classes, a one-year diploma and a two-year degree also are available. Several of the weekend classes provide credit toward the diploma or degree in historic preservation.

Edgecombe is one of only five community colleges in the nation that offers a program in historic preservation and the only one in North Carolina.

Hands-on training is what sets Edgecombe's program apart, says Monika Fleming, program chair. "There are a couple of public universities that offer a bachelor's or master's degree, but they don't do the hands-on trades training that we do."

Curran also will instruct a new class in "Millwork," which will teach students how to make and repair molding, frames, and mantels for historic homes. The class will be limited to eight students; dates are to be determined.

Another new class is "Chair Caning," which will be taught over six evenings beginning in late February.

MORE
Posted by Brock Townsend at Saturday, January 28, 2012 No comments:

Ten Best Jobs for People with 2-Year Degrees for 2011

View the ten best jobs with 2-year degrees for 2011 in the medical, business and educational fields. Discover the industries and US cities with high demand for these jobs. Be aware of stiff competition, because employers nowadays are looking closely into human skills as well as the technical skills.

We have listed the best jobs with 2-year degrees for 2011 based on their industries' strong showings. Health and medical care jobs, accounting and computer technology occupations, and the educational sector emerged as those least affected by unemployment in the trend of job loss statistics for 2010.

Find out if any of these well-paying jobs suit you or match your interests in life, and then take up a two-year college course. It could be an associate's program for an undergraduate bachelor’s degree or technical course work headed to some engineering or science degree.

However, be sure to check out the educational institution's full accreditation from the Accrediting Council for Independent Colleges and Schools (ACICS), in case you will be taking your 2-year study at independent colleges or schools. Do this by locating the school’s accreditation status in the ACICS Member Directory. This particular step is important in order to get credits for the college subjects that you intend to study.

Have a headstart early-on by knowing the nature of the job in order to get a clear picture of what it requires. Today's hiring trend is not just a matter of filling a vacant post. Employers hire those who have a definite goal and purpose because the aspirant has the potential to provide meaningful work that would lay the foundation for a long-term plan. In addition, it is important that the aspirant's interests are aligned with the company's core values and visions.The ability to work with a team and to provide excellent customer or patient service are traits regarded as valuable by most hiring companies.

Read on for more information about the 10 best jobs for 2-year degree courses as of 2011.

For the first time, the Justice Department has made public a series of sensitive messages that passed to the highest levels of the agency within hours of an ambush that killed a U.S. border patrol agent…The email messages show the former top federal prosecutor in Arizona, Dennis Burke, notifying an aide to Holder via email on Dec. 15, 2010 that agent Brian Terry had been wounded and died. "Tragic," responds the aide, Monty Wilkinson. "I've alerted the AG, the acting Deputy Attorney General..."

This correspondent was on the phone with Mike Vanderboegh of Sipsey Street Irregulars a few hours ago ths evening, shortly before the NPR release. From Vanderboegh’s assessment:

A wide range of scientists and engineers from institutions around the world have signed an opinion piece published in the Wall Street Journal with a message for elected officials and candidates with regard to global warming.

Here‘s the gist of the 16 scientists’ message addressing the growing political sentiment that something must be done for the environment before it’s too late:

There is no compelling scientific argument for drastic action to “decarbonize” the world’s economy.

So why are many scientists and those in public office pushing an alarmist message that the world is already behind on curbing the effects of man-made global warming? (Related: See The Blaze coverage of the United Nation’s climate conferences) The scientists write that there are many reasons but suggest we first look at “cui bono?”, which means “as a benefit to whom”. Translated into today’s language, the scientists write to “follow the money”. The scientists expound on this idea:

Turn this ship around

You are invited to...
An Old-Fashioned
War Between the States
Christmas Ball

Free Photography Sitting
A free photography sitting will be available for all our attendees.
To see photos from past Olde South Balls, click HERE.

Roundabout via Cousin Colby
Posted by Brock Townsend at Saturday, January 28, 2012 No comments: