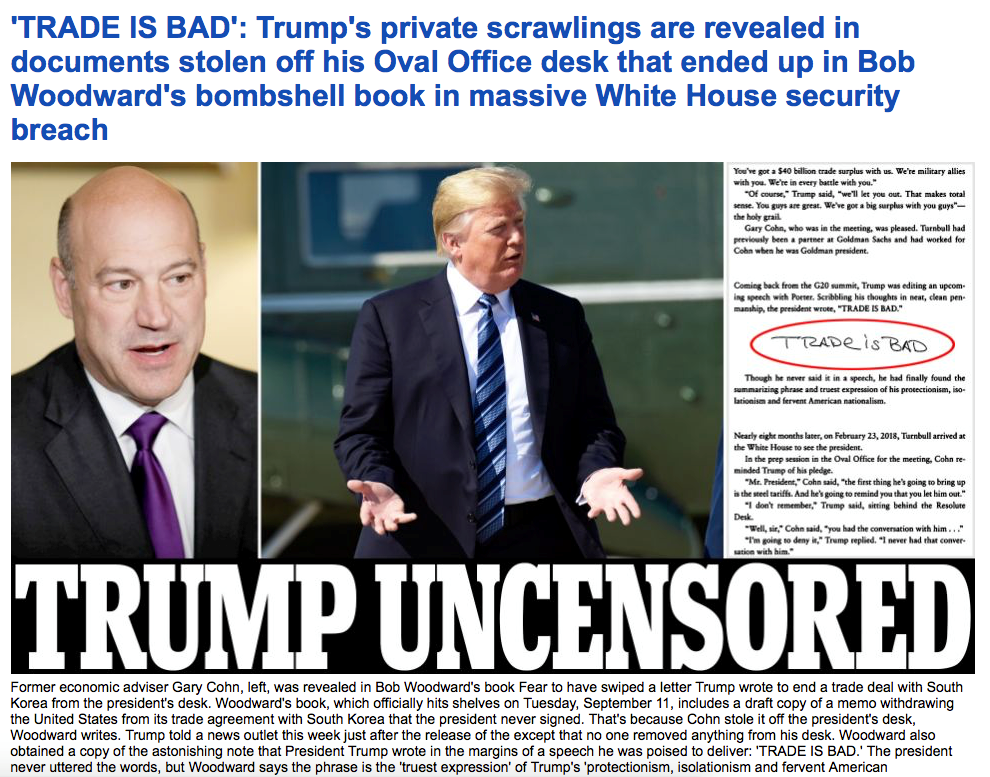 Former economic advisor Gary Cohn swipes notes that President Trump made from his desk and gives them to reporter Bob Woodward of Watergate fame that Woodward then uses to promote his new book entitled FEAR.

Former Director of Communications Omarosa Manigault Newman is said to have audio taped every conversation she had in the White House and without substantiation claims The Donald used the “N” word and has more video tapes and emails too.  She is on a nationwide tour to tout her new book with the news press giving a “spy” the limelight to kick off her new career.  Some would call this a security breach worthy of incarceration.   The Trump Administration is smart enough not press charges against Omarosa and make her infamous.

Two new pictures of General Loan after being wounded

Colonel Loan was later saved by an American MP after being wounded on a Saigon bridge.

"Probably the worst robbery attempt of all time"

Via  Paul Jackson "This guy has democrat written all over him." Turner said they’re willing to reach an out-of-court settlement with Sons of Confederate Veterans if it doesn’t involve putting the statues back up.


Sources tell WMC Action News 5 that the Sons of Confederate Veterans and members of the Forest family want the City of Memphis and Greenspace to pay them millions of dollars to relocate the graves of General Nathan Bedford Forrest and his wife, Mary Ann.

For more than a century the bodies of Forrest and his wife have been buried in the park off Union Avenue.


His statue atop the memorial was removed in December 2017. 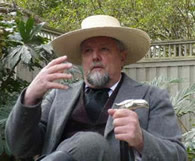 The Republican’s Avenue to Power

“It Was Lincoln Who Made War”

Another Northern General’s View of the Negro

I made a snowman. 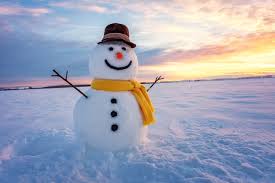 From Butch a roommate at military school. He came home with me for a leave

8:20 - The gay couple living nearby threw a hissy fit and moaned it could
have been two snow men instead.

8:22 - The transgender man..woman...person asked why I didn't just make one
snow person with detachable parts.

8:25 - The vegans at the end of the lane complained about the carrot nose,
as veggies are food and not to decorate snow figures with.

8:28 - I am being called a racist because the snow couple is white.

8:31 - The Muslim gent across the road demands the snow woman wear a burqa.

8:40 - The Police arrive saying someone has been offended.

8:42 - The feminist neighbor complained again that the broomstick of the
snow woman needs to be removed because it depicted women in a domestic
role.

8:43 - The council equality officer arrived and threatened me with eviction.

8:45 - TV news crew from the ABC shows up. I am asked if I know the
difference between snowmen and snow-women? I reply, "Snowballs" and am now called a sexist.

9:00 - I'm on the News as a suspected terrorist, racist, homophobic,
sensibility offender, bent on stirring up trouble during difficult
weather.

9:10 - I am asked if I have any accomplices. My children are taken by social
services.

9:29 - Far left protesters offended by everything are marching down the
street demanding for me to be beheaded.

Moral: There is no moral to this story. It's just a view of the world in
which we live today, and it is only getting worse.
Posted by Brock Townsend at Saturday, September 08, 2018 8 comments:


The Rasmussen Reports daily Presidential Tracking Poll for Friday shows that 48% of Likely U.S. Voters approve of President Trump’s job performance. Fifty-two percent (52%) disapprove.
The latest figures include 32% who Strongly Approve of the president is performing and 43% who Strongly Disapprove. This gives him a Presidential Approval Index rating of -11. (see trends).
Posted by Brock Townsend at Saturday, September 08, 2018 No comments: 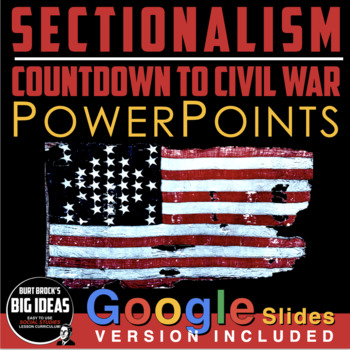 America is at a tipping point – if we allow the FEELINGS of the left to supersede the rule of law the country will tilt further toward anarchy and there will be civil war. Accepting the FACTS of election outcomes is a far better choice. It’s time to go old school – there are winners and there are losers. Get used to it!

On January 26, 2018, Daniel Greenfield gave a brilliant speech in South Carolina in which he argued that politics make civil wars – not guns. “Guns are how a civil war ends. Politics is how it begins.”

What does that mean?

“Two or more sides disagree on who runs the country. And they can’t settle the question through elections because they don’t even agree that elections are how you decide who’s in charge. That’s the basic issue here. Who decides who runs the country? When you hate each other but accept the election results, you have a country. When you stop accepting election results, you have a countdown to a civil war.”
This is no small thing.

Kris Paronto @KrisParonto
Benghazi is a conspiracy @BarackObama ?! How bout we do this,let’s put your cowardly ass on the top of a roof with 6 of your buddies & shoot rpg’s &Ak47’s at you while terrorists lob 81mm mortars killing 2 of your buddies all while waiting for US support that you never sent.

Three comments in reply to "On Second Amendment, Kavanaugh says he must side w...":

On Second Amendment, Kavanaugh says he must side w...

Neither Kavanaugh's personal belief nor the majority of SCOTUS opinion matter....all that matters is the Constitution written in black and white before them.
-- Phillip

Yes, Phillip!
The beginning, subordinate clause of the 2nd Amendment sentence mentions "militia" which references the enumerated power in Article I, Section 8.15-16. There it is stated re: the militia that the U.S. Government only may "govern such part of them (the militia) as may be EMPLOYED in its service". And according to the 10th Amendment, the U.S. Government may do NOTHING without delegated power. Therefore, it has NO lawful power for any gun laws re: the People.

If one READS the Preamble to the Bill of Rights, they were ADDED to "prevent usurpations and abuses" , that is, the Federal Government going beyond its delegated powers. The "shall not be infringed" main clause reiterates that the Federal Government may do NOTHING re: "the right of the People to keep and bear (carry) arms!
--Ron W

Judge Kavanaugh cited quite a few quotes from the Federalist Papers, which was good. I would've liked to have heard this one cited and applied to gun law legislation since it is pursuant or precisely congruent to "the equal protection of the laws" clause in tbe14th Amendment:
" Congress can make no law which will not have its full operation on themselves and their
friends, as well as on the great mass of the society."
-- James Madison, The Federalist Papers, No. 57.

I doubt if Sen. Feinstein would vote for her own anti gun bills if they included all government officials and agents. She and others want to take from us what they have and keep for themselves--and the by force. It's what criminals do.
--Ron W
Posted by Brock Townsend at Saturday, September 08, 2018 5 comments: 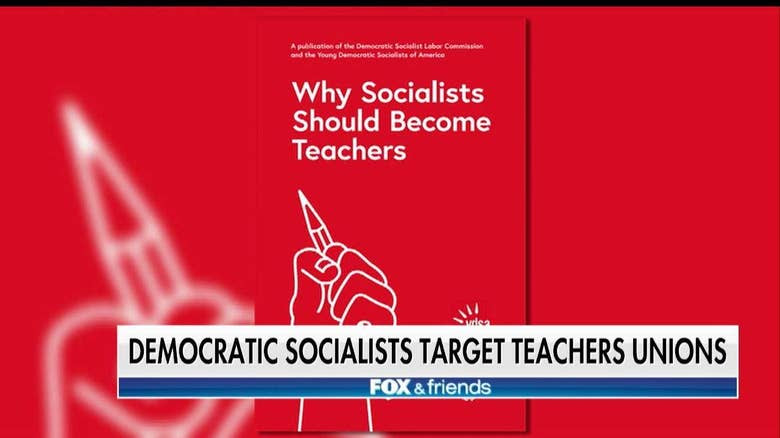