We Are All Deplorables Now: Trump is president because he gets it.

This was a neo-Bolshevik show trial where the defendant was presumed guilty and due process meant digging up dirt from his school days to smear and break him.


Four days after he described Christine Blasey Ford, the accuser of Judge Brett Kavanaugh, as a “very credible witness,” President Donald Trump could no longer contain his feelings or constrain his instincts.

With the fate of his Supreme Court nominee in the balance, Trump let his “Make America Great Again” rally attendees in Mississippi know what he really thought of Ford’s testimony. 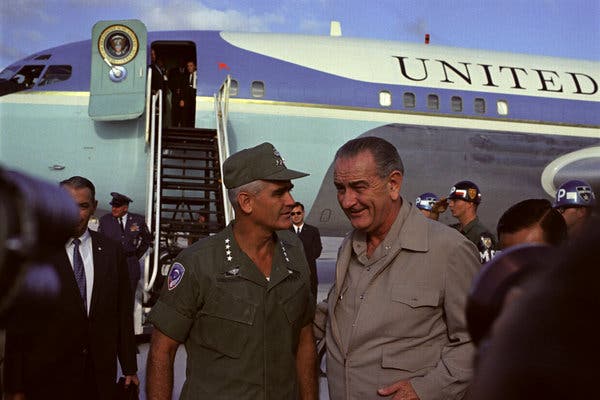 In one of the darkest moments of the Vietnam War, the top American military commander in Saigon activated a plan in 1968 to move nuclear weapons to South Vietnam until he was overruled by President Lyndon B. Johnson, according to recently declassified documents cited in a new history of wartime presidential decisions.


The documents reveal a long-secret set of preparations by the commander, Gen. William C. Westmoreland, to have nuclear weapons at hand should American forces find themselves on the brink of defeat at Khe Sanh, one of the fiercest battles of the war.

With the approval of the American commander in the Pacific, General Westmoreland had put together a secret operation, code-named Fracture Jaw, that included moving nuclear weapons into South Vietnam so that they could be used on short notice against North Vietnamese troops.

Pictures of the Forest Hill High School halftime band performance during their game against Brookhaven High School are going viral on social media.


Many are saying the performance depicted students dressed as doctors and nurses holding SWAT team members at gunpoint.

Two Brookhaven police officers were killed in the line of duty responding to a shots fired call last week.

It should come as no surprise that Edwin M. Stanton sought to manipulate the civilian court trial of John Surratt Jr. I suppose he felt that being Secretary of War gave him certain “prerogatives” not usually available to mere mortals.

South Vietnamese soldiers stand near bodies of a South Vietnamese commander of a training camp and command center and members of his family after the camp was retaken from the Viet Cong. The commander, a colonel, was decapitated and his wife and six children were machine gunned.

February 6, 1968. Mourners line the grave site of South Vietnamese Col. Nguyen Tuan, his wife and five children in Saigon. Tuan was beheaded by the Viet Cong when he refused to support them in their attack on Saigon. His wife and children were killed in a bomb shelter that was fired and grenaded.
Posted by Brock Townsend at Saturday, October 06, 2018 No comments: