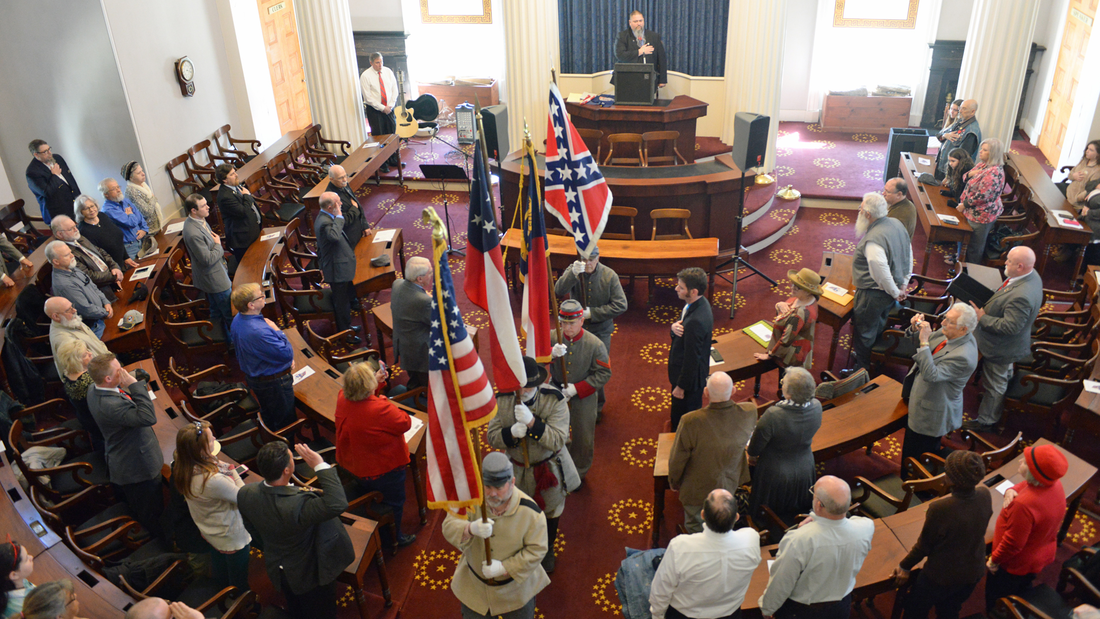 For thirty-one years the North Carolina Division of the Sons of Confederate Veterans has sponsored annually Confederate Flag Day, an event commemorating our state’s rich history and Southern heritage, held in the House of Representatives chamber of the historic 1840 Tar Heel State Capitol. First proclaimed by former Governor James G. Martin in 1988, the day has served as an occasion to host a number of major guest speakers: including former Chief Justice of the North Carolina Supreme Court Beverly Lake Jr., distinguished historians Clyde Wilson and Lee Congdon, and internationally-known authors such as Don Livingston and Paul Gottfried.

For all those years, the event has been peaceful and gone off without problems. Indeed, the Sons of Confederate Veterans has been a major contributor to the programs of the State Capitol, providing funding for restoration and preservation projects, and supplying volunteers for Capitol activities.

This year was different.

Dated 1971 with an Unusual Helmet (Identified as an American)

The recent fiasco surrounding the building of Amazon’s partial HQ2 in New York is the latest development in the war against free enterprise. Because of opposition from anti-business politicians, notably Rep. Alexandria Ocasio-Cortez, Amazon decided to pull the plug on investing billions of dollars into the campus that was planned for construction in Queens.

The loss of the venture—which would have created 25,000 new jobs paying an average salary of $150,000 per year—marks a significant loss for the area economy and is a window into the future if the Left’s newly intensified anti-business canon is left unshackled.

Unfortunately, such ideals have already been put to paper.

In 1928, an unusually far-sighted southerner named Broadus Mitchell pondered the implications of the South’s impending modernization, wondering “whether these great industrial developments [to come] will banish the personality of the South … or whether the old spirit will actuate the new performance.”

“Will industrialism produce the same effects here as elsewhere,” he mused, “or will it submit to be modified by a persistent Southern temperament?” A half century later, the South has certainly seen its share of industrialization, urbanization, and all the other -actions that sociologists call development and most of us would optimistically call progress, but the answers to Mitchell’s questions are still not clear.