If you listen to the modern historical profession, Southern secession in 1861 represented “treason.”

David Blight, Professor History at Yale University, has made this belief the part of the core of his attack on Confederate symbols. If we should not take them down because they represent “white supremacy,” then they should be removed because Southerners were “traitors.”

Traitors to whom or what?

Certainly this was an open question in 1860 and 1861. Secession–political, economic, social–had been advanced by various groups since the founding. The very act of independence in 1776 was an act of secession. Secession had been an American principle and an American tale for generations.


More @ The Abbeville Institute
Posted by Brock Townsend at Thursday, November 16, 2017 No comments: Links to this post

The Mine Laid at Washington

Lincoln chose to ignore the advice of the most prescient Cabinet members who could foresee where his aggressive and warlike actions would take him. The inexperienced new president had seen the result of Buchanan’s provocative Star of the West expedition to Sumter in early January 1861, but still rushed headlong into a collision and bloody war which followed. It should also be noted that Southern Unionists who opposed secession were looking to Lincoln for a peaceful settlement of the crisis, and pleaded with him to evacuate Sumter and let time cool the debate.
Bernhard Thuersam, www.Circa1865.com   The Great American Political Divide

The Mine Laid at Washington

On the 15th of March, 1861, President Lincoln submitted the following request in writing to each member of his Cabinet:

“My Dear Sir, Assuming it to be possible to now provision Fort Sumter, under all the circumstances is it wise to attempt it? Please give your opinion in writing on this question.”

Secretary Cameron wrote that he would advise such an attempt if he “did not believe the attempt to carry it into effect would initiate a bloody and protracted conflict.”

“By sending or attempting to send provisions into Fort Sumter, will not war be precipitated? It may well be impossible to escape it under any course of policy that may be pursued, but I am not prepared to advise a course that would provoke hostilities . . . I do not, therefore, under all the circumstances, think it wise to provision Fort Sumter.”

“The commencement of civil war would be a calamity greatly to be deplored and should be avoided if the just authority of the Government may be maintained without it. If such a conflict should become inevitable, it is much better that it should commence by the resistance of the authorities or people of South Carolina to the legal action of the Government in enforcing the laws of the United States . . . in my opinion it would not be wise, under all the circumstances, to attempt to provision Fort Sumter.”

“I am unwilling, under all circumstances . . . to do any act which may have the semblance before the world of beginning a civil war, the terrible consequences of which would, I think, find no parallel in modern times . . . upon the whole I do not think it wise now to provision Fort Sumter.”

Postmaster-General Blair and Secretary Chase united in the opinion that it would be wise to make the effort to provision Fort Sumter.

[Secretary Salmon P. Chase] then proceeded to declare that, if such a step would produce civil war, he could not advise in its favor, but that, in his opinion, such a result was highly improbable, especially if accompanied by a proclamation from the President, reiterating the sentiments of his inaugural address. “I, therefore,” concluded Secretary Chase, “return an affirmative answer to the question submitted to me.”

It will be seen . . . that five of the seven members of the Cabinet concurred in the opinion that no attempt should be made to provision or reinforce Fort Sumter, and that such an attempt would in all probability precipitate civil war.

As Mr. Seward expressed it, “We will have inaugurated a civil war by our own act without an adequate object”; or, in the language of Secretary Welles, “By sending or attempting to send provisions into Fort Sumter, will not war be precipitated?” . . . I am not prepared to advise a course that would provoke hostilities.”

If such were the opinions of leading members of President Lincoln’s Cabinet, expressed in confidential communications to their chief, as to the character of the proposed action, can it be deemed unreasonable that the people of Virginia held similar views?

Fourteen days later, the President made a verbal request to his Cabinet for an additional expression of their views on the same subject. Seward and Smith adhered to their former opinions. Chase and Blair were joined by Welles. Bates was noncommittal, and no reply was made by Cameron, so far as records show.

In the light of the facts and arguments presented by the members of the President’s Cabinet, men, not a few, will conclude that, if the explosion occurred at Fort Sumter, the mine was laid at Washington.”

Sarah Palin on sexual harassment: 'People know I'm probably packing' so they 'don't mess with me' 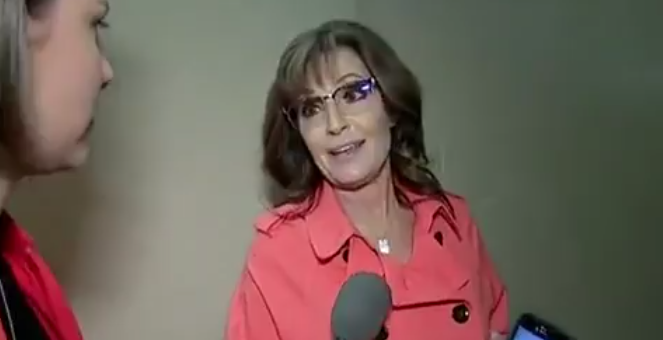 Sarah Palin (R) on Thursday condemned sexual harassment in the workplace, adding that she has not personally experienced it because people know she carries a weapon.

An MSNBC reporter stopped the former Alaska governor and Republican vice presidential candidate in the Capitol, where she was meeting with Sen. Rand Paul (R-Ky).

More @ The Hill
Posted by Brock Townsend at Thursday, November 16, 2017 4 comments: Links to this post 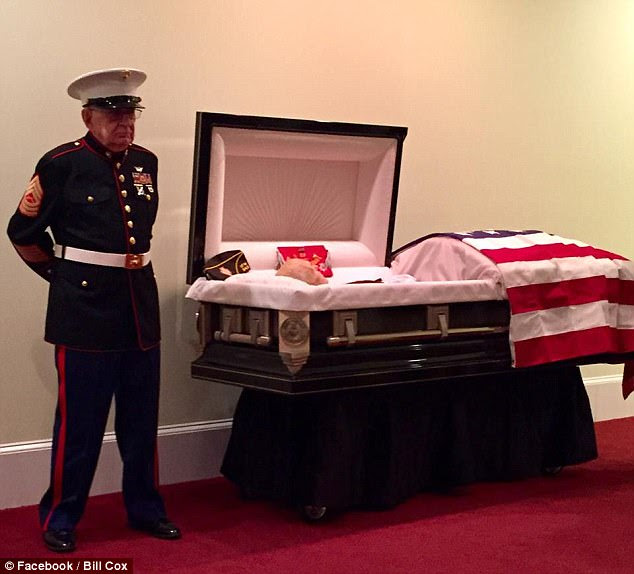 An 83-year-old retired Marine kept a promise he made to a fellow officer while they were hunkered down in a bunker during the Vietnam War.

Retired Marine Master Sgt. William H. Cox and Retired Marine First Sgt. James 'Hollie' Hollingsworth were shielding themselves from rockets and mortars in 1968 as they were fighting in the Marble Mountains during the war on New Year's Eve. (Tet '68)

The two men, who were strangers to each other, had decided if they made it out of the bunker and survived the war, they would contact each other every New Year's Eve.

For the next five decades they kept that promise - every New Year's Eve they would catch up. 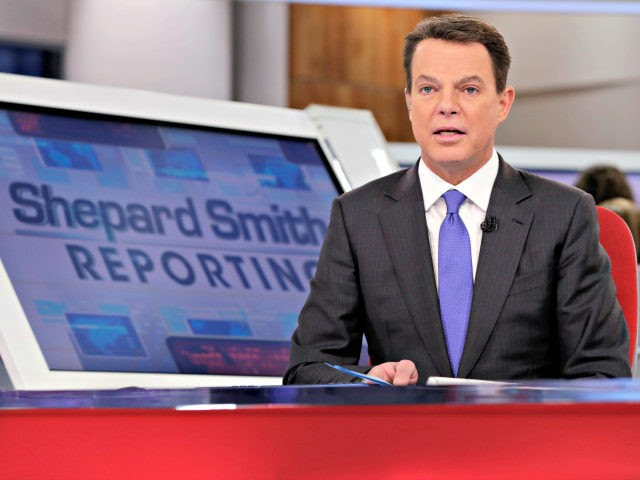 In the wake of Fox News anchor Shepard Smith’s six-minute fallacy-filled Uranium One “fact check” rant on Tuesday, social media is brimming with enraged Fox viewers calling for the network to dump the longtime host and “send him to CNN.”

Several left-wing and establishment media outlets reported some of the more searing social media screeds from fans of Fox, many of whom wished the cabler would part ways with its liberal broadcaster.

Breitbart News has debunked the myths peddled in Smith’s monologue. Below is a roundup of some of the best headlines and social media posts from angry and disappointed Fox fans.

From left-wing Salon, which called Smith’s Uranium One segment “awe-inspiring”:


More @ Breitbart
Posted by Brock Townsend at Thursday, November 16, 2017 No comments: Links to this post

More than difficult to believe.

The poll, conducted from Monday to Wednesday and released Thursday, shows Obama with a 52 percent favorability rating in the state, compared to Trump’s 49 percent.

More @ The Hill
Posted by Brock Townsend at Thursday, November 16, 2017 No comments: Links to this post

Cruz vs Feinstein over banning "assault" weapons in the USA

Posted by Brock Townsend at Thursday, November 16, 2017 8 comments: Links to this post

When hunting was the major source of food, hunters often used stalking horses as a means of sneaking up on their prey. They would synchronize their steps on the side of the horse away from their prey until they were close enough for a good shot. A stalking horse had a double benefit if the prey was an armed person. If the stalkers were discovered, it would be the horse that took the first shot. That’s what blacks are to liberals and progressives in their efforts to transform America — stalking horses. Let’s look at it.


More @ LRC
Posted by Brock Townsend at Thursday, November 16, 2017 No comments: Links to this post The bribery trial of Sen. Robert Menendez (D-N.J.) ended in a mistrial Thursday after jurors said they were hopelessly deadlocked on corruption charges against the lawmaker and a wealthy Florida eye doctor.

“We cannot reach a unanimous decision,’’ the jury said in a note just before lunch on Thursday. “Nor are we willing to move away from our strong convictions.”

A mistrial is a major victory for a senator who had to fight 18 counts of alleged corruption, and a setback for the Justice Department, whose efforts to combat public corruption have been curtailed by a recent Supreme Court decision.

Feminist lawyer Gloria Allred refused to deny that her client’s “Roy Moore” signature in her high school yearbook is NOT a fabrication. CNN’s Wolf Blitzer grilled Allred on the matter Wednesday.

“Well, all I’m saying is, we will permit an independent examiner of the writing…We will allow all of this to be asked and answered at the hearing,” Allred said.

“But that’s not a flat denial, Gloria,” Blitzer said.

“We will not be distracted.”

Blitzer asked why Allred needed a Senate hearing and would not just permit an independent handwriting expert to take a look.

“Well, uh, all I can say is we want it done in a professional setting to the extent possible, that’s the only setting in which people can testify under oath,” Allred said.

After flying in the B-2 bomber, Air Force Col. Leland Bohannon knows a thing or two about stealth.

And the attack against his faith isn’t it. In fact, the military seems to be going out of its way to punish the Christian dad of five, despite a distinguished career defending the same freedom the Air Force is intent on taking from him.

Like a lot of service members, Bohannon was relieved when President Donald Trump signed the executive order protecting religious freedom. But that same May, he found out the hard way that not everyone in the military had gotten the memo. Instead of encouraging faith, Air Force officials were continuing the Obama policy of punishing it.

The controversy started when someone approached Bohannon about signing a “certificate of spouse appreciation” for an airman in a same-sex marriage. A devoted Christian, Bohannon couldn’t, in good conscience, celebrate a relationship that violated biblical truth. After talking with the command chaplain and a staff judge advocate, he asked for a religious accommodation.


More @ The Daily Signal
Posted by Brock Townsend at Thursday, November 16, 2017 No comments: Links to this post