The Lincoln Legacy: A Long View

This image is actually a mix of two legitimate pictures of Lincoln’s second inauguration.  I made it in Photoshop to place John Wilkes Booth in his correct place in the crowd, using the best image of him available. Booth at Lincoln’s Second Inauguration

With the time and manner of his death Abraham Lincoln, as leader of a Puritan people who had just won a great victory over “the forces of evil,” was placed beyond the reach of ordinary historical inquiry and assessment. Through Booth’s bullet he became the one who had “died to make men free,” who had perished that his country’s “new birth” might occur: a “second founder” who, in Ford’s theater, had been transformed into an American version of the “dying god.” Our common life, according to this construction, owes its continuation to the shedding of the sacred blood. Now after over a century of devotion to the myth of the “political messiah,” it is still impossible for most Americans to see through and beyond the magical events of April 1865. However, Lincoln’s daily purchase upon the ongoing business of the nation requires that we devise a way of setting aside the martyrdom to look behind it at Lincoln’s place in the total context of American history and discover in him a major source of our present confusion, our distance from the republicanism of the Fathers, the models of political conduct which we profess most to admire. The examination of Lincoln’s career as divided into Whig, artificial Puritan, and serious Cromwellian phases should facilitate that recovery. And provide a proper word to break the silence that will not let us know and judge.


More @ The Abbeville Institute
Posted by Brock Townsend at Monday, February 13, 2017 No comments: Beyond the New England slave trade which populated the American South with millions of enslaved Africans, there were many Yankees who moved South before 1861 to engage in agriculture and the holding of slaves.  And they had a Southern counterpart who learned the Yankee’s  close-fisted ways.

During the War and after Northern bayonets had conquered Southern regions, many industrious and profit-minded Yankees came South to try their hand at revolutionizing Southern agriculture and labor with experiments at Hilton Head and Louisiana.


More @ The Abbeville Institute
Posted by Brock Townsend at Monday, February 13, 2017 No comments: We the small nations and aspiring small nations of the world find it increasingly difficult to escape the clutches of the largest, wealthiest, most powerful, most materialistic, most environmentally irresponsible, most racist, most militaristic, most violent empire in history which does little to support the vast majority of its citizens other than the superrich. Through corporate, state, and military might, political elites manipulate our lives. We have become mere pawns of a global system of dominance and deceit called technofascism in which transnational megacompanies and megastates control us through money, markets, technology, and media, sapping our political will, civil liberties, collective memory, traditional cultures, sustainability, and political independence, and as victims of affluenza, technomania, cybermania, megalomania, globalization, and imperialism, we hereby issue and proclaim this.

He also welcomed Europeans who are fed up with their liberal governments to move to Hungary.

“Of course we can give shelter to the real refugees: Germans, Dutch, French, Italians, scared politicians and journalists,” Orban said in his address. “Christians who had to flee their own country, those people who want to find here the Europe that they lost at their home.”


With the future of President Trump's order withholding federal funds to "sanctuary cities" unclear, states are stepping up to take punitive action against cities that are making themselves havens for illegal immigrants.

Already, some state funds have been withheld for recalcitrnt municipalities, and more pressure is coming fast.

Republican Gov. Greg Abbott, of Texas, says he will pursue legislation to let the state remove officials from office if they refuse to end their sanctuary policies. Abbott is feuding with the sheriff in Travis County, home to the proudly left-liberal state capitol city of Austin, that defies the conservative state. Abbott withheld grant money from the Travis County Sheriff's office over its sanctuary policy. Lacking funds, the office cut 18 jobs. 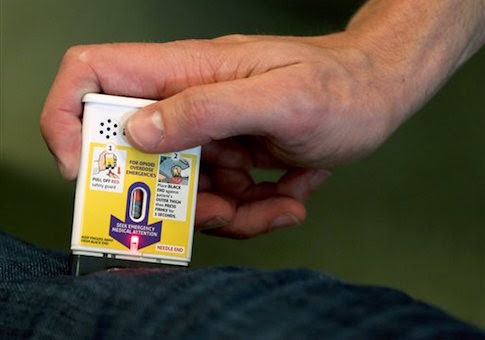 The head of a pharmaceutical company, who partnered with the Clinton Foundation, has increased the price of an auto-injector used to treat opioid overdoses by 680 percent over the course of three years.

Spencer Williamson, the president and chief executive officer of the Richmond, Virginia-based Kaleo Pharmaceuticals, is under fire after the price of a two-pack of Evzio, a device that treats life-threatening opioid overdoses, skyrocketed from $690 in 2014 to $4,500 today.

On Sunday night Joy Villa stunned the world when she showed up to the Grammy’s wearing a Make America Great Again dress.

The Gateway Pundit was contacted by Andre Soriano, the man who designed the dress, for an exclusive interview.

Andre Soriano immigrated from the Philippines to the United States when he was only 16 years old to pursue a better life and to pursue his dreams of working in the fashion industry. Andre now owns his own highly successful business named Andre Soriano based out of California.

People Call For Joy Villa To Be KILLED After She Wears Make America Great Again Dress To Grammys
Posted by Brock Townsend at Monday, February 13, 2017 2 comments:

P.V. Journalist: “Okay, how long do I have to stay in New Hampshire to vote today?”

N.H. Poll worker: “Do you have an intention of living here indefinitely?”

N.H. Election worker: “If you want to vote today, you might want to tell them that you’re staying with a friend and you’re here indefinitely which sounds like it’s true.”


More with video  @ The Gateway Pundit
Posted by Brock Townsend at Monday, February 13, 2017 No comments:

Webb: Democratic Party has moved 'very far to the left' & DC Insiders Are Working To “Personally Discredit” Trump And His Staff


Former Sen. Jim Webb (D-Va.) on Sunday said the Democratic Party has moved "very far to the left" over the past five or six years.

In an interview on NBC's "Meet The Press," Webb said the Democrats are looking at 2018 and they "don't have a message."

"When you can't have a Jefferson-Jackson dinner, which was a primary celebratory event of the Democratic Party for years, because Jefferson and Jackson were slaveholders," Webb, a candidate in the 2016 Democratic primary race, said.

"They were also great Americans in their day. Something different has happened to the Democratic Party."

"And they've lost the key part of their base," he said.


More with video @ The Hill

DC Insiders Are Working To “Personally Discredit” Trump And His Staff
Posted by Brock Townsend at Monday, February 13, 2017 No comments: