Al Green: Most important to me were Elvis Presley and Wilson Pickett

"I just loved Elvis Presley. Whatever he got, I went out and bought."

More @ WIKI
Posted by Brock Townsend at Tuesday, April 05, 2016 No comments: Links to this post 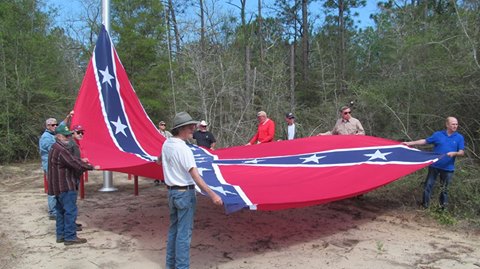 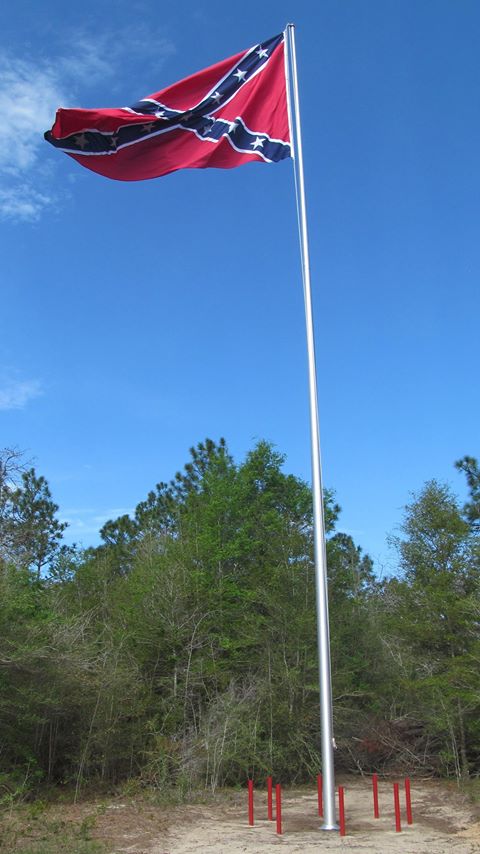 "For every flag removed, a thousand more will rise to take its place..."
#DixieRising

Congratulations to our friends in the Stephen R. Mallory SCV Camp #1315, Pensacola, FL, who raised a 15 FT X 25 FT Confederate Battle Flag on a 71' pole on the North side of I-10 near mile marker 36 over the weekend!

More @ The Virginia Flaggers
Posted by Brock Townsend at Tuesday, April 05, 2016 4 comments: Links to this post 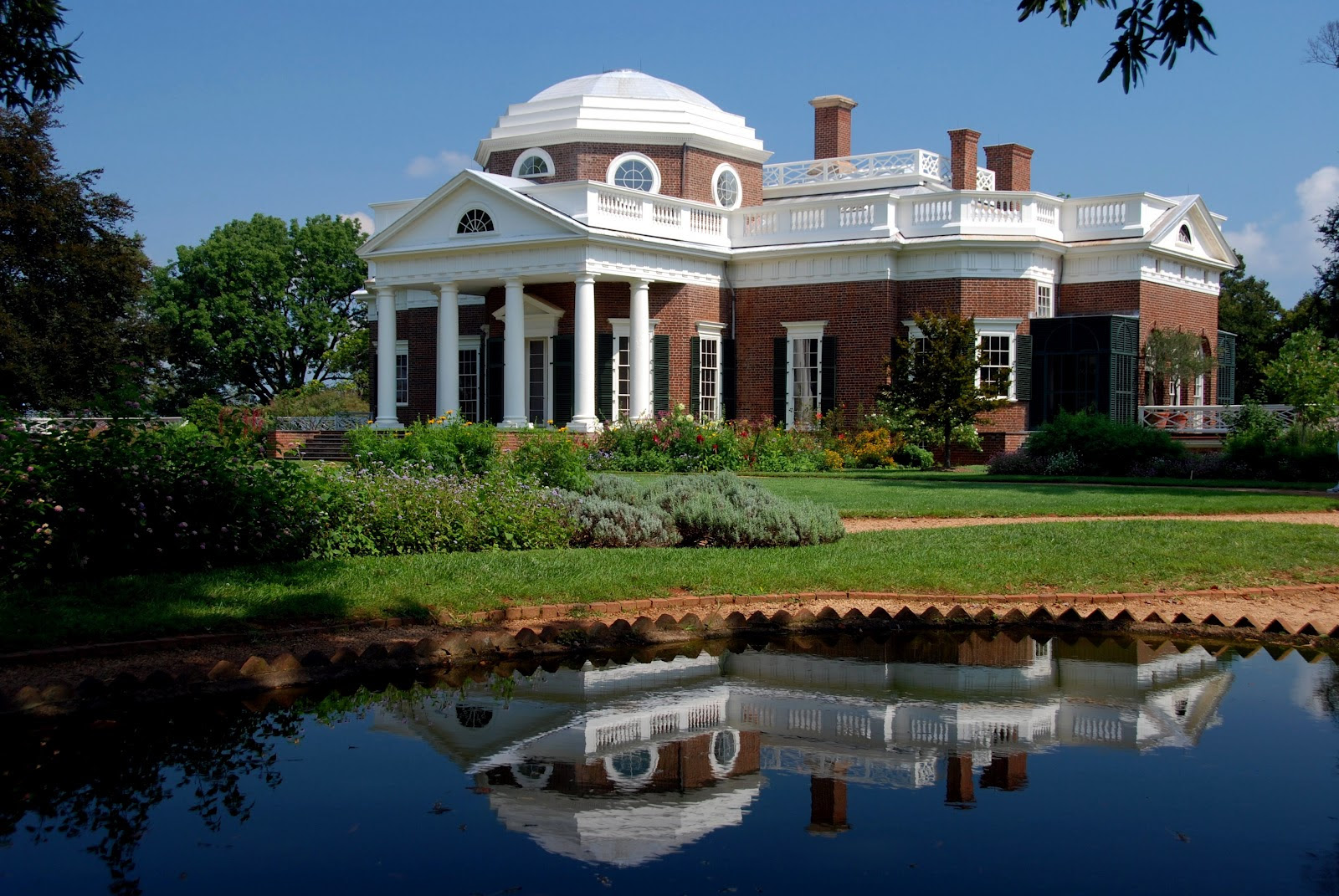 Jefferson wrote in 1792: “As the doctrine is that a public debt is a public blessing, so they think a perpetual one is a perpetual blessing, and therefore wish to make it so large that we can never pay it off.” Prior to 1861 it as common for American presidents to view that indebting future administrations was both immoral and unconscionable.
Bernhard Thuersam, www.Circa1865.com   The Great American Political Divide

“On September 6, 1789, Jefferson admonished James Madison from Paris that the country should get straight, “at the threshold of our new government,” how we are to keep the debt from destroying the democracy. Jefferson’s premise, which he believed to be “self-evident,” is that one generation cannot – either morally or in fact – bind another.

It follows that “No generation can contract debts greater than may be paid during the course of its own existence.” The “earth belongs in usufruct [trust] to the living . . . [T]he dead have neither powers nor rights over it.” If one generation can charge another for its debts, “then the earth would belong to the dead and not to the living generation.”

Jefferson continued: “The conclusion then, is, that neither the representatives of a nation, nor the whole nation itself assembled, can validly engage debts beyond what they can pay in their own time.”

Madison wrote back that he generally agreed but thought debt was justifiable if it built a project that benefited the future taxpayer – a useful bridge, for example. Jefferson answered that the power to borrow was too dangerous to allow exceptions – any exception would expand or destroy the prohibition.

Madison’s argument seemed plausible, but Jefferson’s camel’s-nose-under-the-tent concern was right. No government will stay within Madison’s exception. World War II, the last time this country could make any kind of legitimate case for a benefit to future generations, was in fact financed 47 percent by pay as you go taxes, which provided $137 billion out of a total cost of $304 billion.

Jefferson could not get his 1798  amendment adopted, but the country got more chances to adopt Jeffersonian principles in 1994, 1995, and 1996 when Sen. Sam Nunn (D., GA) proposed a Balanced Budget Amendment. At the time, the national debt was large (about four trillion dollars) but could have been dealt with. It was not yet a perpetual debt.

Senator Nunn called his legislation the “Jefferson Amendment.” It required that Congress balance expenses with revenues [and] the public constantly supported Nunn’s amendment by 75-percent margins. But he was defeated by the Clinton Cabinet, which argued that the economy would crash if the federal government couldn’t borrow.

A New York senator said the amendment’s passage could “lead to the devastation of the banking industry.” With the defeat of the Nunn Amendment, the boat sailed for the Republic.”

Posted by Brock Townsend at Tuesday, April 05, 2016 4 comments: Links to this post 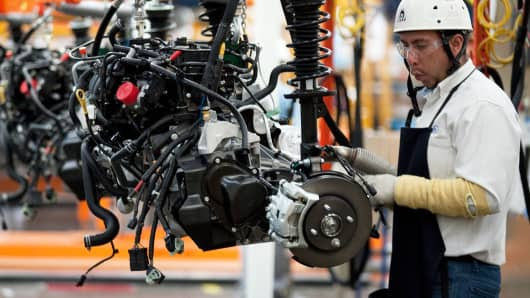 In a move that is sure to draw ire on the presidential campaign trail, Ford on Tuesday announced that it will be adding a new assembly plant in Mexico.


The Detroit automaker said it will invest $1.6 billion into the facility and create 2,800 jobs by 2020, with construction expected to begin this summer.

Ford's expansion in Mexico has been expected for months, causing Republican presidential nominee Donald Trump to repeatedly hammer the automaker.


"This transaction is an absolute disgrace. Our dishonest politicians and the special interests that control them are laughing in the face of all American citizens," said Trump in a statement released after Ford's announcement on Tuesday.

More @ CNBC
Posted by Brock Townsend at Tuesday, April 05, 2016 No comments: Links to this post

In the videos — obtained by InfoWars — protesters stated that the “red, white and blue — this shit is the new swastika.”

The protesters — who claimed to support the Black Lives Matter movement despite not being officially affiliated with the organization — were drawing attention to the 2012 death of West Allis teenager Corey Stingley.

Posted by Brock Townsend at Tuesday, April 05, 2016 2 comments: Links to this post

Confederados 2008
Posted by Brock Townsend at Tuesday, April 05, 2016 No comments: Links to this post

Priebus: 'The party is choosing a nominee' 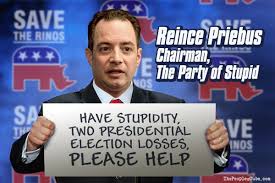 "By the way, this is a nomination for the Republican Party," Priebus told 620 WTMJ in Wisconsin. "If you don't like the party, then sit down. The party is choosing a nominee."

Priebus said he does not think Trump will run as a third-party candidate, and added that he expects all remaining Republican candidates to support the party's nominee.

Tom Watson of Georgia was old enough in 1863 to see Yankee prisoners on trains, and his father and two uncles served in defense of the American Confederacy. He remembered his grandfather’s plantation as belonging to another world, “a complete social and industrial organization, almost wholly sufficient unto itself,” and the old agrarian traditions of his childhood held sway for all his days.  He attacked those wanting to increase military appropriations for being “Afraid of your own proletariat. You are afraid of the dissatisfied workman, thrown of work by these soulless, these heartless, these insatiable trusts and combinations of capital . . .” Watson was elected senator from Georgia in September 1920, and fought tirelessly against Woodrow Wilson’s League of Nations.
Bernhard Thuersam, www.Circa1865.com   The Great American Political Divide

“The first subject on which the new Senator delivered himself at any length was the proposed treaty with Columbia, intended to conciliate that country for the Panama affair by the payment of $25,000,000. Republican senators, rallying to the defense of [Theodore] Roosevelt, had opposed the treaty as proposed by the Wilson administration.

Now that Roosevelt was dead . . . even [Henry Cabot] Lodge had reversed himself to support the treaty . . . [and] let the cat out of the bag by his statement: “We must not only enlarge our trade, but we must enlarge our source of supply of oil wherever it is possible to do so, and we cannot do it if we take the position that it is a sin for Americans to make money and that those who are engages in foreign investment and foreign commerce are to be punished instead of sustained.”

“Mr. President, are we the agents of Standard Oil Company – that and nothing more?” asked Watson. “When did that infant, protected in all its roots and branches, need our assistance in securing access to foreign oil fields?” He intimated that all the fine talk about Pan-American brotherhood turned his stomach. “Let us confess what we are doing – that we are here to buy property for the Standard Oil Company.”

If the country was in such need of oil, why did we cut ourselves off from the richest oil fields in the world – those of Soviet Russia.? “Because we did not like their form of government.” Did the senators like the form of government in Columbia any better? “What is it, by the way? “Despotism tempered by assassination.”

[Senators] who professed to be horrified at Red atrocities met with his ridicule. “Where is the consistency,” he asked, “of staying in a state of war, or at least non-intercourse, with a great nation which has always been our friend and at the same time handing out food to them as objects of charity? First we destroy their commerce and then try to replace it by gifts, by doles of food.” We had no more right to dictate Russia’s form of government than we had to dictate Germany’s.

He quoted a speech of [Daniel] Webster’s advocating recognition of Greece. “Let us not affect too much saintliness,” he admonished. “Are our skirts entirely clear of wrong in Hawaii, the Philippines, and in Santo Domingo?”

In a different connection, but in the same trend, he said: “We are hereditary revolutionists. We are so from instinct, history and tradition. We are so by sentiment.” Whence, then, all this outcry against revolutionists.”

[On questions of foreign policy Watson opposed] anything that remotely smacked of the [Woodrow Wilson’s] League of Nations, which, he said, was as much like the Holy Alliance of the nineteenth century “as two black cats are like one another.”

His most conspicuous fight was waged against the ratification of the Four-Power Treaty upon insular affairs in the Pacific. He denounced it as in reality an alliance with the dominant imperialist powers, designed to promote imperialism, and to draw the United States into the web of foreign rivalries, if not into the League itself.”

Posted by Brock Townsend at Tuesday, April 05, 2016 2 comments: Links to this post

Mark Dice at it again. :) Jesus Was Shot by Lee Harvey Oswald in the 1300's - Easter Sunday FAILS

Either the Oceanside or San Diego pier.
Posted by Brock Townsend at Tuesday, April 05, 2016 No comments: Links to this post 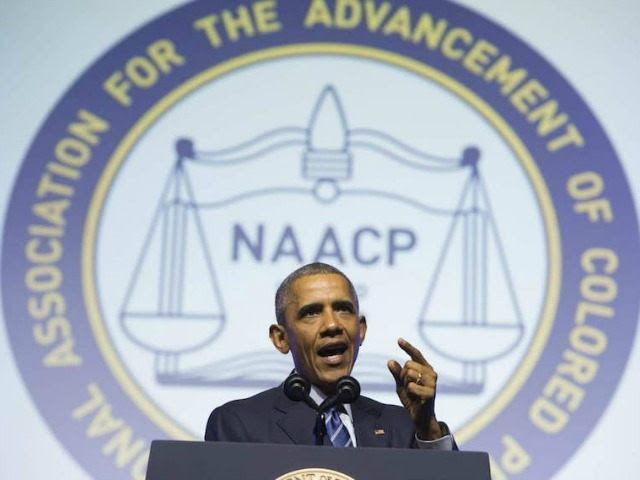 The National Association for the Advancement of Colored People (NAACP) says it’s part of a coalition of leftwing groups planning a second wave of protests and mass civil disobedience scheduled to disrupt Washington, DC later this month.

Many of the participating groups are backed by billionaire George Soros.

As Wisconsinites head for the polls, our Beltway elites are almost giddy. For they foresee a Badger State bashing for Donald Trump, breaking his momentum toward the Republican nomination.

Should the Donald fall short of the delegates needed to win on the first ballot, 1,237, there is growing certitude that he will be stopped. First by Ted Cruz; then, perhaps, by someone acceptable to the establishment, which always likes to have two of its own in the race.

But this city of self-delusion should realize there is no going back for America. For, whatever his stumbles of the last two weeks, Trump has helped to unleash the mightiest force of the 21st century: nationalism.

Transnationalism and globalism are moribund.

First among the issues on which Trump has triumphed -- "We will build the wall -- and Mexico will pay for it!" -- is border security.

Pages and pages of phone records.

We are deciding how to present this evidence.

Please pass this on to Ted Cruz and his supporters.


More @ The Gateway Pundit
Posted by Brock Townsend at Tuesday, April 05, 2016 2 comments: Links to this post

North Carolina’s House Bill 2 has been the subject of controversy all over the nation – so much so that five federal agencies are considering withholding funds from the state in response to the bill, which blocks anti-LGBT discrimination lawsuits.
House Bill 2 blocks local governments from creating their own rules regarding gender and sexual discrimination, as well as employment, wages, and public accommodations. Critics say the law targets the LGBT community, while supporters claim that HB2 protects religious freedom by not requiring people to serve same-sex couples if it goes against their faith. HB2 also requires that individuals use public bathrooms and locker rooms that correspond with their biological gender, rather than the gender with which they may identify.