Obama's response in Kobani is show only insuring ISIS triumphs 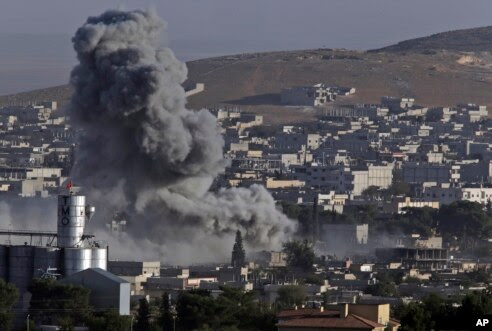 It's pure BS that air power can't stop them as it certainly did in the Spring 1972 North Vietnamese invasion across the DMZ and the Kurds are certainly fighting as well, if not better than the SVN.

Fighting raged on Friday in the Syrian Kurdish city of Kobani near the Turkish border, with Syrian Kurdish leaders saying key government buildings have fallen to Islamic State forces.

Kurdish fighters are trying to halt a three-week offensive by the Islamic State on the strategic border city, as militants aim to take complete control of the area.

The U.N. envoy to Syria, Staffan de Mistura, said Friday that thousands of people most likely will be massacred if Kobani falls to Islamic State fighters. He said there are 700 elderly civilians trapped in the city, as well as about 12,000 people who have left the city center but can not get to the border with Turkey.

The U.S. military continued carrying out air strikes on Islamic State targets in Kobani on Friday, firing at sites much closer to the center of the city, especially in areas close to the Turkish border. The attacks targeted Islamist training sites, tanks and vehicles. 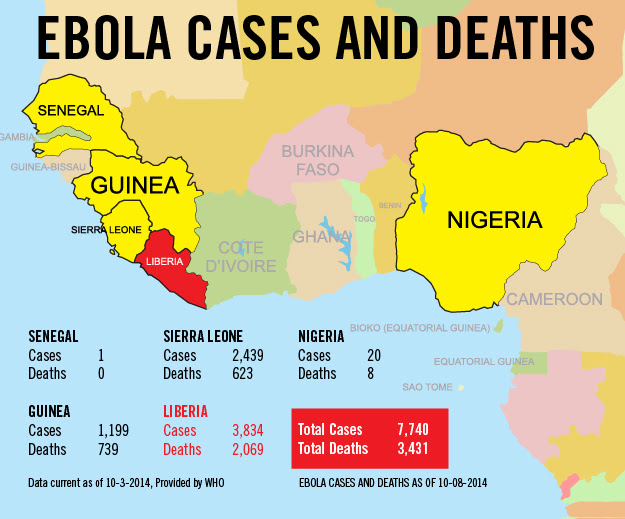 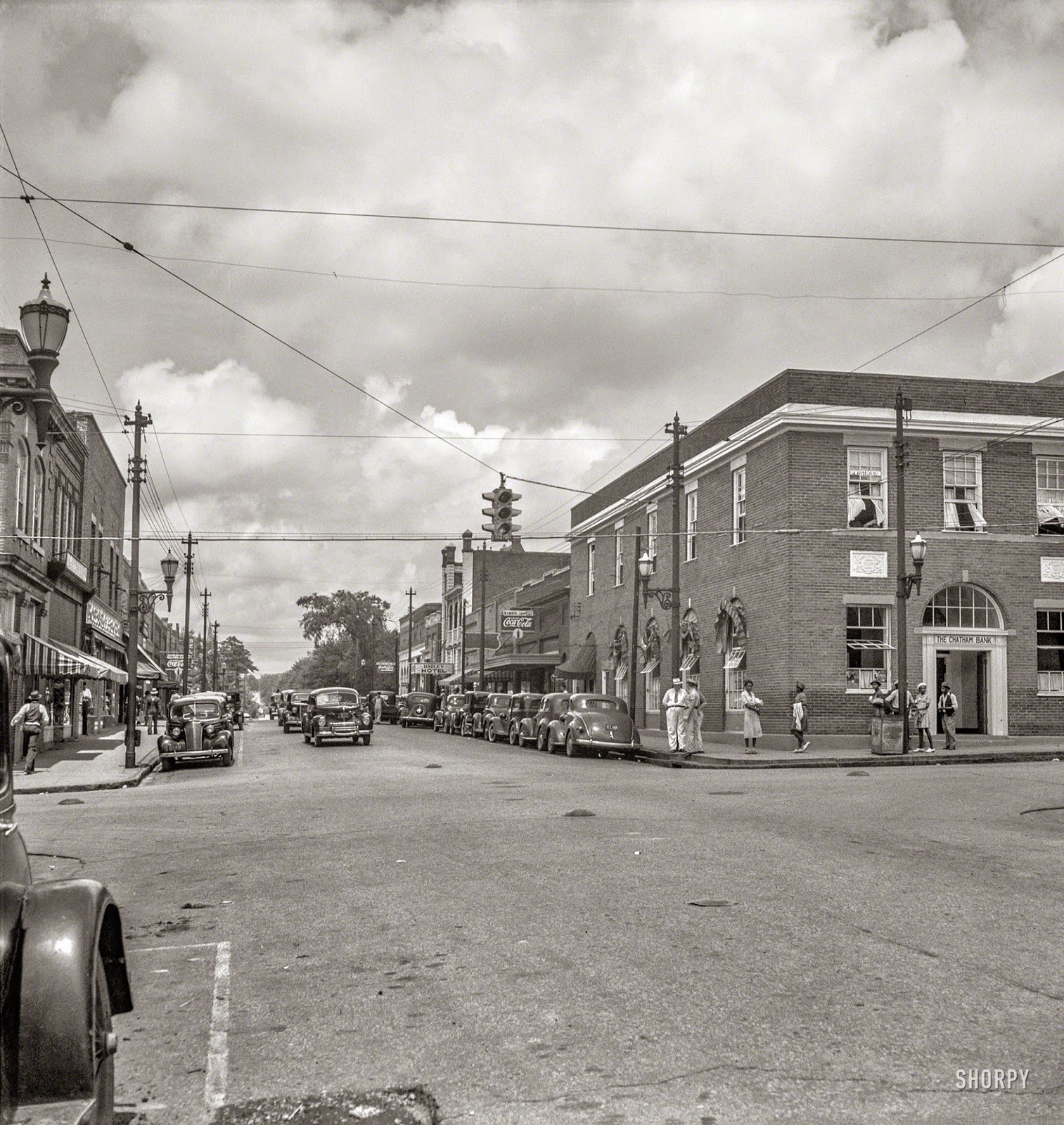 Posted by Brock Townsend at Friday, October 10, 2014 No comments:

Border Patrol Agent Slams Feds: “We All Know Who We’ve Captured… You Can’t Keep This Kind Of Information A Secret” 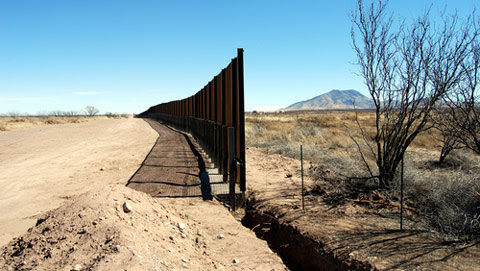 Representative Duncan Hunter (R-CA) recently claimed that a high-level Department of Homeland Security official informed him of the capture of at least ten Islamic State terrorists on the Texas-Mexico border. A DHS spokesperson speaking with the New Republic unequivocally denied the Congressman’s claims:


“The suggestion that individuals who have ties to ISIL have been apprehended at the Southwest border is categorically false, and not supported by any credible intelligence or the facts on the ground,” said DHS spokesperson Marsha Catron.

“DHS continues to have no credible intelligence to suggest terrorist organizations are actively plotting to cross the southwest border.”

"I guess it was the goat's night off."

NC: Airline snubs Army Ranger for not being '1st class'

U.S. Airways officials are under fire for an incident on a Thursday flight from Portland, Oregon, to Charlotte, North Carolina, in which a flight attendant apparently refused to allow an Army Ranger with a chest full of medals to hang up his jacket, because he wasn’t a first-class passenger.

According to WSOC-TV in Charlotte, passengers reported 1st Sgt. Albert Marle asked the flight attendant for permission to hang up his uniform jacket to keep it from getting wrinkled.

She refused his request, because “the service is available only to first-class passengers,” the report said.

Others on the flight claimed the flight attendant yelled at passengers who tried to ask other attendants to intervene.

Killed nine babies, but we got stuck with her.

Jane Fonda has revealed more details of her mother's troubled life, saying she discovered her mother had been sexually abused from a young age and had nine abortions before giving birth to the actress.

It is like old times. Kurdish protestors clashing with Turkish riot police in towns across southeastern Turkey and ultranationalists taking to the streets, too, flashing the symbol of the Grey Wolves, a violent far-right group that was responsible for more than 700 murders in the vicious political violence that engulfed the country in the 1970s.

But the events provoking this madness are absolutely current. Just across the border in Syria, the city of Kobani, once home to more than 50,000 people – most of them Kurds – is about to fall to the forces of the so-called Islamic State, better known as ISIS or ISIL. Kurdish militias – men and women – have held off the savage jihadists for weeks now despite being outnumbered and outgunned. In the last few days U.S. airstrikes have slowed the ISIS advances, but not enough. ISIS has taken more than half the town, including major government buildings.

All the while the Turkish government, with its tanks, its air force, and its 300,000 soldiers on active duty has done nothing but watch from a mile or two away across the border. Nothing but watch, that is, and prevent Kurdish reinforcements from crossing the frontier to help defend Kobani.

Marine Corps Air Station New River on Wednesday held a full-scale pandemic outbreak drill where health officials and Marines responded to a smallpox outbreak that “occurred” aboard the installation.

According to Lt. Joseph Kotora, the public health emergency officer for Naval Hospital Camp Lejeune, the Exercise Vigilant Response drill was the first of its kind at a military installation in North Carolina.

NATO member Turkey is providing direct intelligence and logistical support to the ISIS terrorist organization, according to a senior Egyptian security official speaking to WND.

The official said Egypt has information Turkish intelligence is passing to ISIS satellite imagery and other data, with particular emphasis on exposing to ISIS jihadists the positions of Kurdish fighters and the storage locations of their weapons and munitions.

The official confirmed reports that Turkey released ISIS terrorists from jail in a sweeping deal with the jihadist organization that saw the release of 49 hostages from the Turkish embassy in Mosul who were being held by ISIS.

Dr. Robinson runs against commie DeFazio for the third time


“Ridicule is man’s most potent weapon. It is almost impossible to counterattack ridicule.”
Well, not quite “impossible.” In fact, let’s give it a nice, big counterattack.

The “Ridicule” directive, of course, is the oft-cited “Fifth Rule” from “Rules for Radicals,” the left’s notorious playbook penned by Chicago Marxist Saul Alinsky, who originated “community organizing” and served as a major role model for Barack Obama.

In the run-up to the all-important Nov. 4 election, voters are being treated to an extreme example of sustained left-wing ridicule of a very good man, scientist and congressional candidate, Art Robinson.

Alinsky’s dictum – that when all else fails, when you cannot credibly challenge your opponent on any other level, defame, mock and ridicule him – is taking center stage in Robinson’s challenge to the co-founder of the radical Congressional Progressive Caucus, the powerful 14-term Rep. Peter DeFazio.

NC State Fair: "It's sad that you gun nuts can't be without them for a few hours." 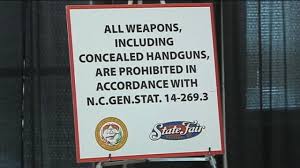 "If this passes there are a lot of people I know that will never go to the fair again. It's sad that you gun nuts can't be without them for a few hours."