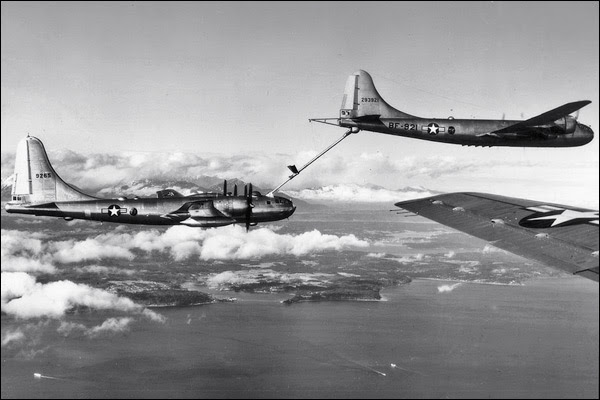 The photo shows the "boom" method, appropriate for quickly transferring large quantities of fuel. The "drogue" method is more versatile and widely used. Both have their place.

An aside. No info with this photo. The extra-tall tail suggests it's not a stock B-29 being refueled. Any experts out there?
The first aerial refueling supported an endurance flight record of 37 hours 15 minutes in June, 1923. Sixteen successful refills were made.

The quote for this week comes from Michael Vlahos at American Conservative:

Today’s Blue elite represents the greatest concentration of wealth and power in the United States. Moreover, such wealth is scattered across a mosaic of pristine, manicured, gated communities physically and socially divorced from the realities of normal American life—glittering bubbles of sovereign privilege. This is the very oligarchy Founders like John Adams so feared.

Charles Smith at Of Two Minds has a pretty good overview of the coming unpleasantness. A couple of excerpts:

Beneath the superficial red-blue divide they are hawking, a broad-based political rebellion against the Oligarchy and their Ruling Class nomenklatura is gathering momentum.


Much of the wealth is controlled by corporate-state cartels operating rentier skims: prices rise while quality and quantity of goods and services remains the same or decline. This is more akin to extortion than a free-market competitive market.

Like most of Mr. Smith's screeds it reads like union boilerplate from the 1930s, but he describes the approaching calamity with clarity.

CNN, PJ Media - Who is profiteering off the grandstanding of Acosta and others? Why after all these years are these press conferences the same pointless activity? Look no further than the White House Correspondents' Association. They determine who gets to sit in that room and where. Naturally, when the White House usurped their prerogatives and banned Acosta, they were irate, as any trade union would be. Only it's not the working class they are helping, it's those big media conglomerates. What the WHCA is doing is of no value to the American public at large. Consciously or not, they are working to preserve a defunct system that preserves the spoon-feeding of information and opinion to the largely unwitting masses.
Posted by Brock Townsend at Tuesday, November 20, 2018 4 comments: Links to this post

As the nation mourns the latest tragedy in “gun free zone” Chicago, a recent report compiled by Jacob Paulsen at ConcealedCarry.com shows that armed citizens facing possible mass shooters are able to stop the potential massacre 94% of the time. Paulsen’s study is inspired by John Lott’s consistent analysis of crime and gun laws.
While sourcing data from the FBI and giving a prefrace, Paulsen reports on ConcealedCarry.com:


More @ The Gateway Pundit
Posted by Brock Townsend at Tuesday, November 20, 2018 No comments: Links to this post

Posted by Brock Townsend at Tuesday, November 20, 2018 8 comments: Links to this post

Here we arrive at George Luther Stearns, another of John Brown’s Secret Six supporters. Mr. Stearns was an industrialist and a merchant. As such, he was pretty well fixed financially. However, it had not always been so. Stearns’ early life had not been easy and he had been in a position where he had to work to support his family, starting at age 15.

Stearns was involved very early on with the Emigrant Aid Society, helping to get anti-slavery settlers into Kansas. Wikipedia noted that “Stearns was one of the Secret Six who aided Brown in Kansas, and financially supported him until Brown’s execution after the ill-fated raid on Harpers Ferry.
Stearns physically owned the pikes and 200 Sharps rifles brought to Harpers Ferry by Brown and his followers. Following Brown’s arrest, Stearns briefly fled to Canada but returned to Medford (Mass.) after Brown’s death…” How Jakob Emig Fought the Yankees 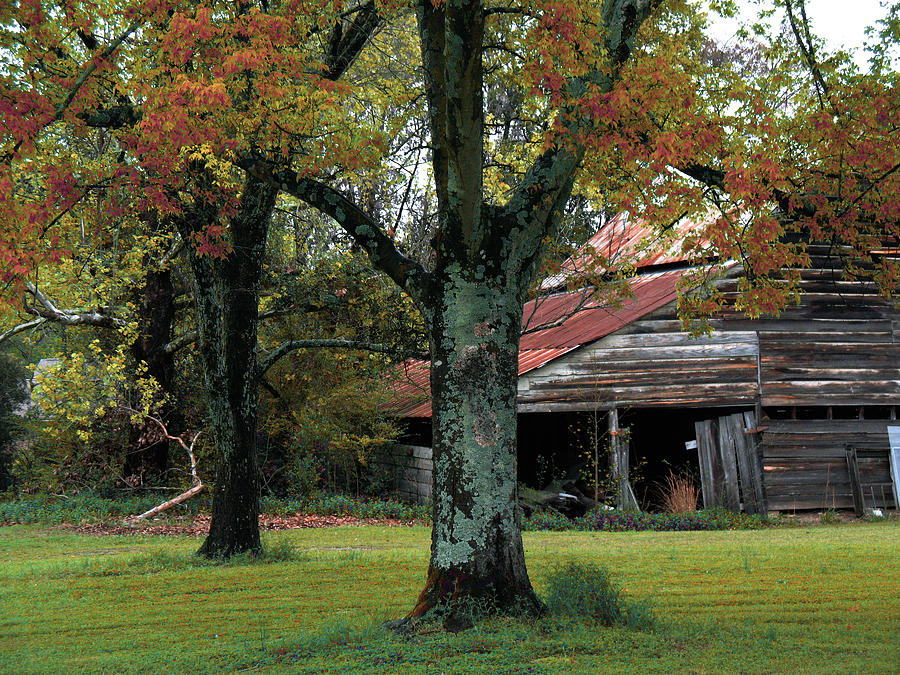 From the front porch, Jakob Emig could look across fields where his winter wheat greened nicely. An old man now, with sons gone off to war, he lived mainly in a woman’s world of married daughters and daughters-in-law on farms scattered nearby. He himself lived alone, widowed now for two years, hard work during war-time finally having taken its toll on his wife’s constitution already weakened by a series of illnesses. She’d borne him seven living children, and he was remembering her now on the front gallery as Old Shack lay at his feet, nose outstretched on paws and wrinkling eyes upward to his master. There would be no hunting today, though the hound eagerly waited for any sign of preparation.

South Africa: Seizure of White Property to Get Official Go-Ahead

What is happening in South Africa serves as an instructive lesson for whites in America and Europe: this anti-white hatred and subjugation is the future which awaits them if the mass Third World invasion of those regions is not halted and reversed.

The South African Parliament’s Constitutional Review Committee this week voted to proceed with a change to that country’s constitution which will remove all potential legal obstacles to the seizure of white property—on the basis that whites “stole” the land—even though well over 80 percent of the disputed land was unoccupied by blacks at the time of white colonization.


More @The New Observer
Posted by Brock Townsend at Tuesday, November 20, 2018 No comments: Links to this post 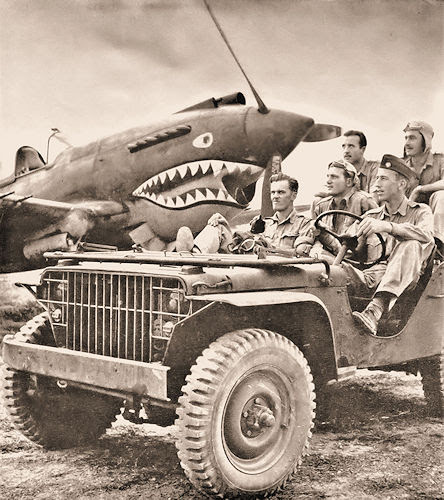 One shining hope has emerged from three catastrophic months of war. That is the American Volunteer Group of fighter pilots, the so-called "Flying Tigers" of Burma and southeast China who paint the jaws of a shark on their Curtiss P40's. Outnumbered often ten to one, they have so far shot down about 300 Jap planes, killed perhaps 800 Jap airmen. They have violently wrenched from the Jap Air Force control of the skies over Burma and southeast China. They have conclusively proved what was once only a Yankee belief: that one American flier is equal to two or three daps. "Give me," said U.S. Lieutenant General Brett in Australia last week, "100 fighters to 200 Japs and I'll lick them every time. And I am not disparaging the Japs. They are good fighters." On the following pages LIFE presents the first full-length portrait of the Flying Tigers in action, taken by LIFE Photographer George Rodger before Jap ground forces seized the A.V.G. base al Rangoon.

Posted by Brock Townsend at Tuesday, November 20, 2018 2 comments: Links to this post

This White House statement is best read in the tone of voice of a parent who's not angry at you, she's just ... disappointed
More @ NewsWars
Posted by Brock Townsend at Tuesday, November 20, 2018 No comments: Links to this post

Just north of the U.S.-Mexico border, ‘Little Dog,’ ‘Weasel’ and other militia members keep an eye out for migrants

Robert Crooks is up before sunrise on a hill he calls “Patriot Point,” walkie-talkie in hand and loaded semiautomatic handgun holstered on his right hip.

To protect himself, he wears a vest padded with National Geographic magazines — including one celebrating great white sharks.

Directly in front of him is a border wall made of steel landing mats left over from the Vietnam War. Just a few hundred feet from the Mexican border, Crooks scans the landscape for any sign of an immigrant trying to cross into the United States.

A Las Vegas resident, Crooks heads the Mountain Minutemen. Along with other militia members in Texas, his group has been gearing up as thousands of migrants from Central America steadily make their way to the U.S. border to ask for asylum.

Hundreds of people fleeing violence from Central America were hit with punches, stones, and coffee. Migrants who have journeyed from Central America to this border city seeking refuge from violence back home have encountered unexpected violence and harassment here. More than 3,000 migrants have arrived in Tijuana since Wednesday—a rate of arrival that city officials say is without precedent in the history of the city known as the “City of Migrants.” The migrants formed part of the Central American caravan seeking political asylum in the U.S.

The caravan’s highly publicized arrival has generated a nationalist backlash from a segment of residents here that views the migrants as a threat to public safety, and as unwanted competition for jobs and public services.


More @ The Daily Beast
Posted by Brock Townsend at Tuesday, November 20, 2018 4 comments: Links to this post


Dov Fischer at the American Spectator makes an interesting case for what looks like fraud in the Democrats' unexpected sweep of all Orange County congressional sweeps.

So here is what happened.  All these Republicans Congressional candidates in Orange County and in other parts of the People's Democratic Republic of California (PDRC) came out of election night as winners.  Two-term representative Mimi Walters in the 45th Congressional District. Young Kim, an appealing newcomer to Congress of Korean-American heritage.  Others.  And then, each day, as more and more provisional and other ballots kept emerging in the California count, the Republican leads dwindled.  But you had your eyes on the red card – the red states of Florida and Georgia.

Posted by Brock Townsend at Tuesday, November 20, 2018 3 comments: Links to this post

Several European countries have already announced they will not sign on to the United Nations Global Compact for Safe, Orderly and Regular Migration.
They fear the agreement will take away their sovereign right to control their own borders.


Poland, Estonia, Czech Republic, Austria, Hungary, Croatian and Bulgaria will not agree to the globalist insanity.

Posted by Brock Townsend at Tuesday, November 20, 2018 2 comments: Links to this post

Globalist Merkel Ally to UK: ‘Take Your Bad Brexit Deal or Leave It — Negotiations Are Over’

A senior German MP and longtime ally of Chancellor Angela Merkel has insisted there is “no question” that the “bad” Brexit deal offered by Brussels could be renegotiated.

Chairman of the Bundestag’s foreign affairs committee, Norbert Röttgen, stated that the German government “do[es] not see any space for further negotiation or renegotiation” regarding Prime Minister Theresa May’s super-soft Brexit agreement, which has been panned by Eurosceptics.

“We are convinced that the deal has now been struck. I personally consider this to be the best of all the bad deals one could negotiate. Now it is for both sides to decide whether to take it or leave it. The negotiations are over,” The Times reported the Christian Democratic Union (CDU) figure saying.

“Both sides have gone to the limits of what is possible for them,” stated Röttgen, who served as Mrs Merkel’s longtime environment minister before taking on his current role.


More @ Breitbart
Posted by Brock Townsend at Tuesday, November 20, 2018 No comments: Links to this post