According to ABC, all applications to the FISA Court were signed off on by the Attorney General and therefore if any applications were processed in the past year, they were signed off on by Loretta Lynch.  This means that Lynch signed off on any requests for wire tapping President Donald Trump during the Presidential race.   This is disheartening knowing that she released a video over the weekend calling for the need for more marching, blood and death on the streets.  This also means that she chose not to investigate the Clinton Foundation for illegal activities but rather signed an application to wire tap President Trump.

Finally, another very disturbing fact about the wire tapping request of President Trump is that the FISA Court turned down President Obama’s Administration’s first request to wire tap President Trump that was evidently signed off on by Attorney General Lynch.  With only two applications denied out of 10,700 from 2009 through 2015, the fact that the Obama Administration’s application was denied by the FISA Court is very disturbing.  The odds of this happening were 0.02%.

The Obama Presidency is now arguably the most corrupt in US history.

Russia is a Diversion 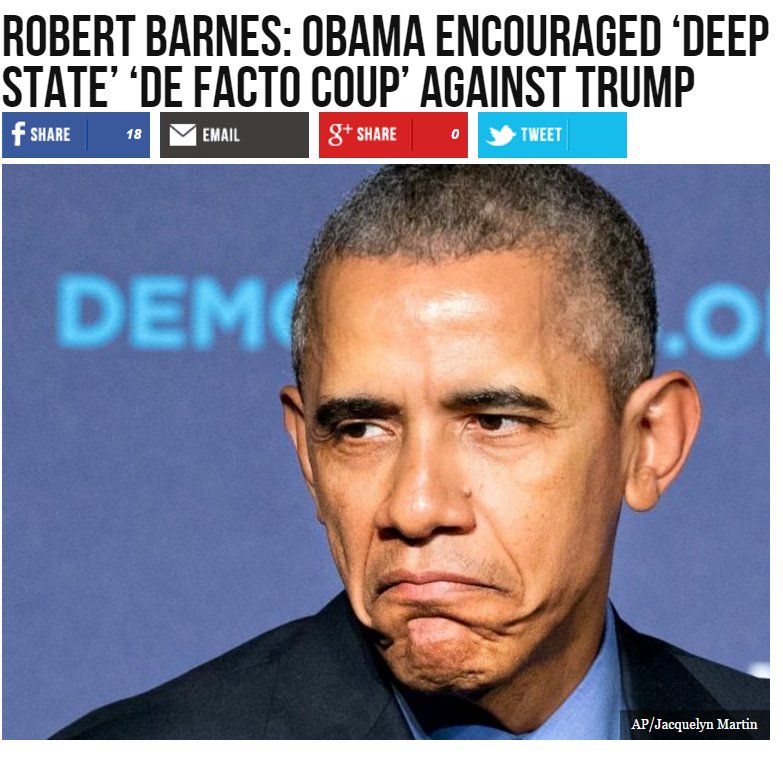 I wrote these words just a couple of days ago.  I have been thinking much about this.  I have decided I was wrong.  Way wrong.

Trump = Russia; Russia = Trump.  Trump and Putin are members of a two-person mutual admiration society.  Who talked to a Russian before January 20?  Flynn?  Out. Sessions?

On the way.  Kushner?  He will be required to divorce Trump’s daughter…I guess.

The neocons want war; they want to ensure the trillion dollars or more per year keep flowing.  They need to keep Russia as the enemy.  Everyone is piling on – republicans and democrats.

Has Trump committed to shrinking the military?  Not at all.  Reduce military spending? Nope.  Stop fighting wars?  No way – Iran, China, North Korea, and ISIS all loom large on his radar; enough work to keep a thousand generals and a few dozen major merchants-of-death busy for a long time.

So what is the worry?  Who needs Russia as an enemy?  So Trump doesn’t go after Russia – he wants to go after somebody – a lot of somebodies.  This is worth at least a trillion dollars per year.

Herridge said this was a top level Deep State leak. Only a select few had access to this information.

Catherine Herridge: The claim that they (Obama administration) never interfered with with a federal investigation, I would argue is patently false because throughout the Clinton email campaign what we saw from Mr. Obama were multiple public statements where he seemed to put his hand on the scale of justice…


More @ The Gateway Pundit
Posted by Brock Townsend at Tuesday, March 07, 2017 No comments:

A three-judge panel of the 5th U.S. Circuit Court of Appeals unanimously cleared the way Monday evening for the monuments to be removed, issuing an opinion that criticized groups seeking to keep the statues in place for arguments that “wholly lack legal viability or support.”

With what is likely the last legal hurdle the city faces removed, the statues are expected to come down quickly. Tyronne Walker, a spokesman for Mayor Mitch Landrieu, said the city will start seeking bids Tuesday to remove the statues, and a contract will be awarded 25 days later.

The mainstream media's open hostility to President Trump may be starting to backfire, according to the latest IBD/TIPP poll.

The poll found that 55% of the public says they've grown "weary from the media's persistently negative coverage of President Trump." A roughly equal share (54%) also believe that the news media "has assumed the role of the opposition party, constantly opposing the president and his policies at every turn."

President Trump pointed to a $20 billion expansion plan by Exxon Mobil Corp. Monday as an example of “the spirit of optimism sweeping the country.”

“This is exactly the kind of investment, economic development and job creation that will help put Americans back to work,” Mr. Trump said in a statement. “Many of the products that will be manufactured here in the United States by American workers will be exported to other countries, improving our balance of trade.”

Exxon Mobil CEO Darren Woods said Monday at an oil and gas conference in Houston that the company will spend $20 billion by 2020 on its “Growing the Gulf” initiative. The investment in 11 major chemical, refining, lubricant and liquefied natural gas projects along the Texas and Louisiana coasts could create 35,000 construction jobs, and 12,000 full-time jobs, Mr. Woods said.


More @ The Washington Times
Posted by Brock Townsend at Tuesday, March 07, 2017 No comments:


When it comes to intelligent conservative thought, it doesn’t get much better than Ben Shapiro.

If you’re a liberal, it’s best just to stay away from him especially on Twitter.

Obama and his acolytes have been pretending that they are offended at the idea that the former president would ever do something inappropriate to bring down Trump.

We are still getting to the bottom of the wiretapping controversy but it is looking more and more like the Obama machine was doing some really shady things behind the scenes.

Housing and Urban Development Secretary Ben Carson doubled-down Monday on his description of slaves as immigrants, arguing that the label fits anyone who comes into a country from the outside - even "involuntary immigrants."

Speaking to department employees in his first full day on the job, Carson stoked controversy when he said America is “a land of dreams and opportunities,” even for “immigrants who came here in the bottom of slave ships” and “worked even longer, even harder for less.”


More with video @ The Hill
Posted by Brock Townsend at Tuesday, March 07, 2017 No comments: