As I Mentioned Previously, I Knew I Shouldn't Travel on April 30th :)

So, I arrive at the airport and the lock on the gun case comes open, so they won't accept it.  Fortunately one of the cops checked it out moved the lever over and convinced the doubtful clerk it was good to go though I thought that if it moved by itself before, it might again.  In Phoenix two attendants came to ask for the keys as it had come open again and told me I could file a claim for damage. :) At any rate, they re-locked it, taped it up and brought the keys on board.  Very pleasant.  Unfortunately I also took a hard fall on one of the moving walkways and may have broken a rib, but not sure yet.  broke three ribs. :( Next, the fight to Charlotte was delayed so my fight to New Bern was canceled, but I was able to take a flight to Wilmington in a short time though they said they wouldn't pay for my transportation home.  Going to pick up my gun case as it didn't appear in the baggage area, they said it was still in Charlotte but the number was registered to someone else! Don't know how they managed that.  So rented a car to go home which a friend returned today and now have to go to New Bern to pick up my car that was left there and  hopefully my gun case. :)
Posted by Brock Townsend at Sunday, May 01, 2016 2 comments: 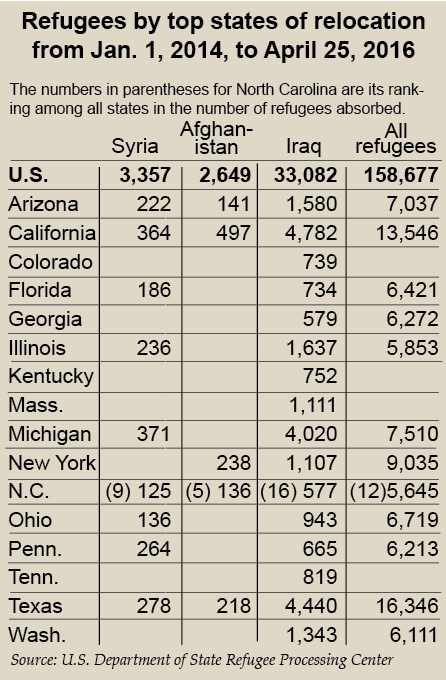 The federal government relocated more Syrian refugees to North Carolina in the last six months than it did the previous 22 months, even as Gov. Pat McCrory and U.S. Rep. Richard Hudson, R-8th District, continue to warn that the screening process for admission to the United States remains broken, posing potential danger to the state.  “We’re not given any forewarning of when they’re coming, where they’re going to, or who they are,” McCrory told Carolina Journal. That raises concerns, he said, because the refugees could be coming from countries embroiled in civil wars or they may be linked to Islamic terrorism.

Changing The Tune Before The Changing Of The Guard. 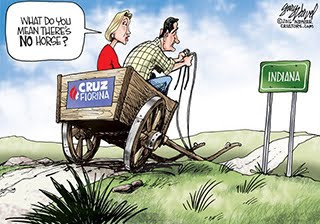 Even before Donald Trump marched to an over whelming victory in his native New York and swept through the rest of the Northeast by phenomenal margins, the meme coming from the Cruz campaign and the legless "stop Trump" operations was that the Indiana primary would be "pivotal" and would at last change the momentum of this primary season.

Well the Indiana primary is but two days away and now we are hearing that it is California that will be "pivotal". Seriously? Either these camps think we have short memories or little comprehension of the English language.

I get it, Indiana is a tough state when it comes to political polling. The divide between upstate and downstate are marked. Trump is up, Cruz is down, Cruz is up Trump is down. If I had the copywriter on the phrases I could have made a small fortune. If the is one thing however that has been consistent it has been the failure of the "experts" of the pundit class to predict what Donald Trump will do and how the public will rally around him.

Via Frank "Best Quote: "For all his faults as a candidate, Trump is forcing a sea change in the American political discourse. His campaign for the presidency has certainly shifted the terms of the debate over foreign policy, not only in the GOP but generally. Senator Rand Paul’s candidacy was dogged by questions about his lack of “orthodoxy” on foreign policy issues. That orthodoxy has now been smashed to smithereens, and future Rand Pauls will face no such suspicious inquiries. Candidates will no longer be required to sing, in unison, “the false song of globalism” – and we have Donald Trump to thank for that."

The reaction to GOP frontrunner Donald Trump’s much-awaited foreign policy speech from the Washington elites was all-too-predictable: they sneered and snickered that he had mispronounced “Tanzania.” The more substantive criticisms weren’t much better: perpetual warmonger Lindsey Graham, whose presidential bid garnered zero percent in the polls, tweeted “Trump’s FP speech not conservative. It’s isolationism surrounded by disconnected thought, demonstrates lack of understanding threats we face.” For Graham, anything less than starting World War III is “isolationism” – a view that gives us some insight into why his presidential campaign was the biggest flop since the “new” Coke. This is the party line of neoconservatives who have long dominated Republican foreign policy orthodoxy, to the GOP’s detriment. Neocon character assassin Jamie Kirchick, writing in the European edition of Politico, put a new gloss on it by claiming to detect a Vast Kremlin Conspiracy as the animating spirit behind the Trump campaign.

Kentucky Confederate monument to be removed after 120 years

Via comment by  Cav Med on "The Return: Chapter 2 (The Cutting Edge) | Ford GT...":"Kentucky Confederate monument to be removed after 120 years.the base of the monument as communist shitbag, "Mayor" Greg Fischer,makes the ambush announcement.
Take note that the "Mayor" states that the new location has not been determined and that it will be placed in storage for a period of indefinite detention."

A Confederate monument will be removed from a spot near the University of Louisville campus where it has stood since 1895.

The stone monument honoring Kentuckians who died for the Confederacy in the Civil War will be moved to another location, University President James Ramsey and Louisville Mayor Greg Fischer said during a surprise announcement Friday. The monument is capped with a statue of a Confederate soldier.