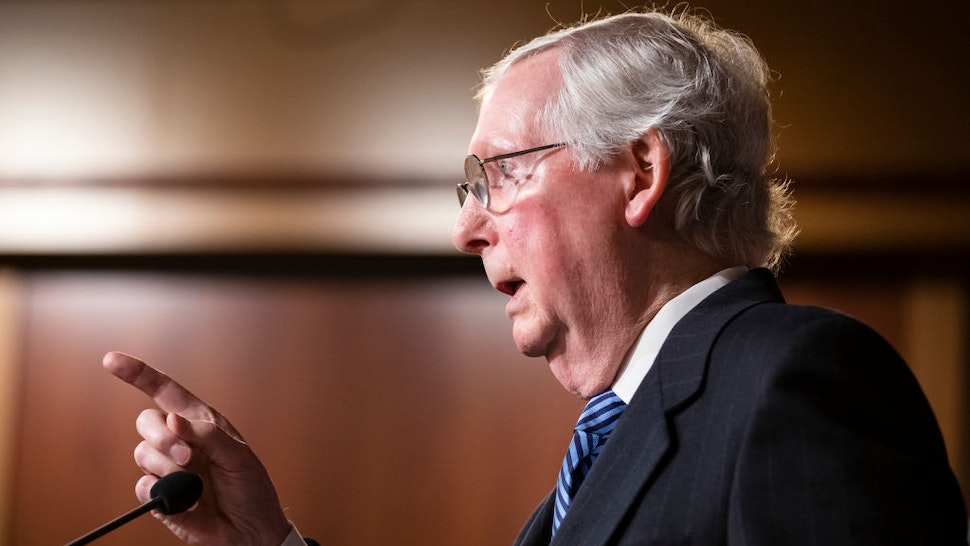 Senate Majority Leader Mitch McConnell is readying the Senate to vote on two powerful pro-life bills: South Carolina Sen. Lindsey Graham’s Pain-Capable Unborn Child Protection Act, which would ban abortions after 20 weeks of pregnancy unless it resulted from rape, incest, or the mother’s life were endangered, and Nebraska Sen. Ben Sasse’s Born-Alive Abortion Survivors Protection Act, which “in the case of an abortion or attempted abortion that results in a child born alive,” would ensure that a health care provider present must act to preserve the life of the child.

Rep. Devin Nunes (R-CA) has been the recipient of outrageous attacks from Democrats and their supporters since early 2017. This was richly detailed in Lee Smith’s 2019 book, The Plot Against the President: The True Story of How Congressman Devin Nunes Uncovered the Biggest Political Scandal in U.S. History. Nunes’s 2018 memorandum, Foreign Intelligence Surveillance Act Abuses at the Department of Justice and the Federal Bureau of Investigation (full text here), was panned by Democrats and Democrat operatives in the media while Adam Schiff’s “counter-memo” (full text here), which defended the FBI’s FISA warrants and other activities associated with surveilling the Trump campaign, was lauded and praised to high heaven. Except that the Horowitz report, Review of Four FISA Applications and Other Aspects of the FBI’s Crossfire Hurricane Investigation (full text here) completely confirmed Nunes’s memo while at the same time totally debunking Schiff’s memo.

Comment on the reason why DOJ Dropped Investigation Against Andrew McCabe 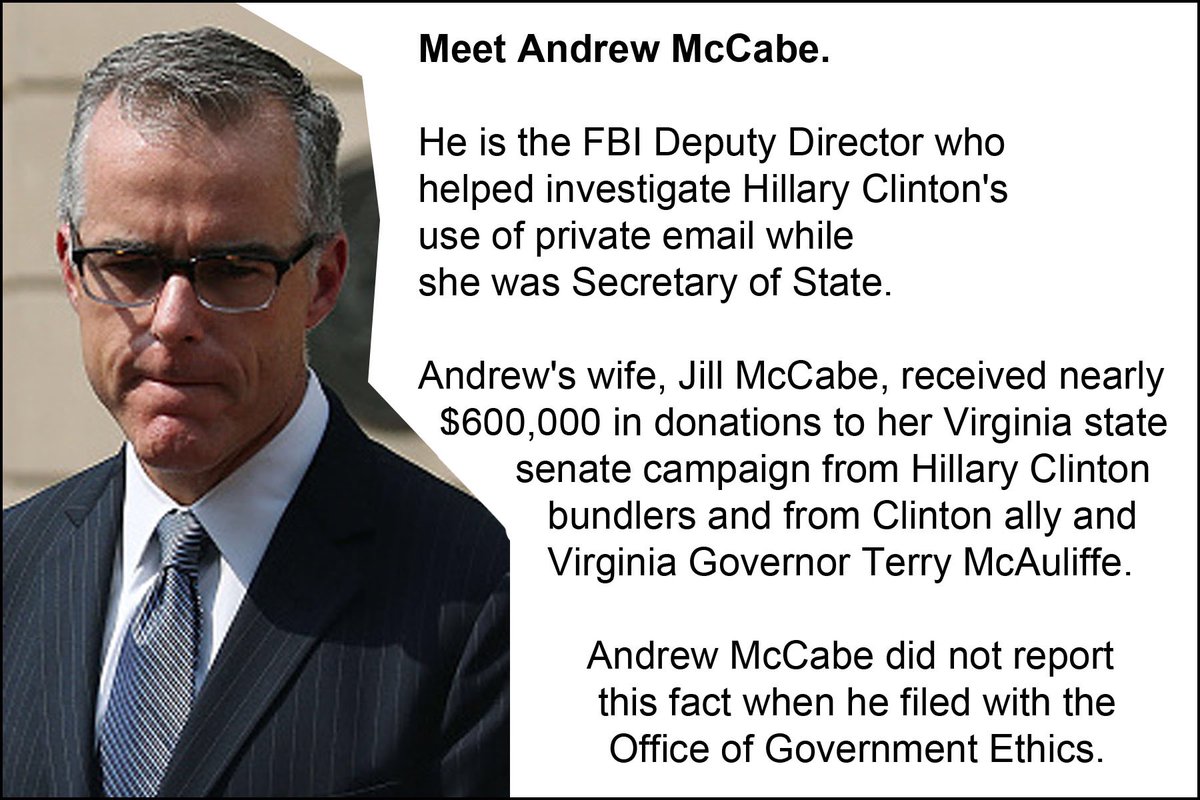 Local radio station here in dc explained it this way. The jury pool here in dc is totally corrupt. They voted 96% democrat in the last election. They absolutely hate republicans and conservatives. In any trial where politics is an issue, a republican will get the book thrown at him and a democrat will walk. In dc, Andrew mcCabe could literally shoot an republican on the front steps of the capital and walk away. This is what "above the law" really looks like. And prosecutors don't take cases to trial when they know with certainty they will lose, no matter what the evidence is.

Former FBI deputy director Andrew McCabe admitted to lying to Congress and will face NO charges at all.

Is this the "swamp" thing they keep talking about?

Sara Carter: If Durham Probe Fails, Nothing Will Stop 'Attempted Coups' in the Future

Investigative reporter Sara Carter, whose stories have exposed some of the early efforts to undermine Donald Trump, said that unless the investigation of prosecutor John Durham into the origins of the Russian investigation brings indictments, it will open the door to "future coups." Carter appeared with Sean Hannity to discuss some of Attorney General William Barr's new rules regarding government surveillance of political campaigns.

The New York Times is at it again.

They seem to always be there, ready to spin a story to minimize the damage to Democrats.

This time, they seem to be wanting to cast aspersions and seeds of doubt about U.S. Attorney John Durham and something interesting he’s reportedly found.

Check out the first paragraph of their story:

From the New York Times:

Speaker of the House Nancy Pelosi’s disgust and frustration reached a fever pitch and the entire country watched her meltdown. Pelosi’s raged couldn’t be contained as she tore up her copy of Trump’s State of the Union address. Tearing Trump’s powerful speech showed how everything Pelosi and her crew of malcontents have done to destroy Trump has failed.

Many claim Pelosi’s emotional collapse was staged. I disagree. When you are a public figure, you always want to be seen as being in control. Losing it and having it captured on camera or audio makes you look unhinged, unstable. It is not a good look for someone of her stature. Pelosi knows that and usually presents well in front of a camera. She typically speaks calmly and holds back from getting ruffled. But that moment at the SOTU in the Speaker’s chair, she lost it. After approximately 90 minutes of listening to the President rub her nose in his list of successes—taking a victory lap while spiking the football—she couldn’t contain herself. It was too much.

Dan Bongino: Was AG Barr Set Up by Stone Prosecutors to Give Appearance He Had Intervened for Trump?


The excessive, abusive and I believe, retaliatory, sentencing recommendation for political operative and former Trump campaign advisor Roger Stone has sucked up a lot of airwaves this week. If anyone is unfamiliar with the sequence of events, here is a brief summary:

On Monday, it was reported that federal prosecutors had recommended a sentence of seven to nine years behind bars for Trump associate Roger Stone following his conviction on making false statements and witness tampering charges. Many of us were shocked and saw this as unreasonable, abusive and a continuation of the injustice we’d grown used to during the Mueller investigation. 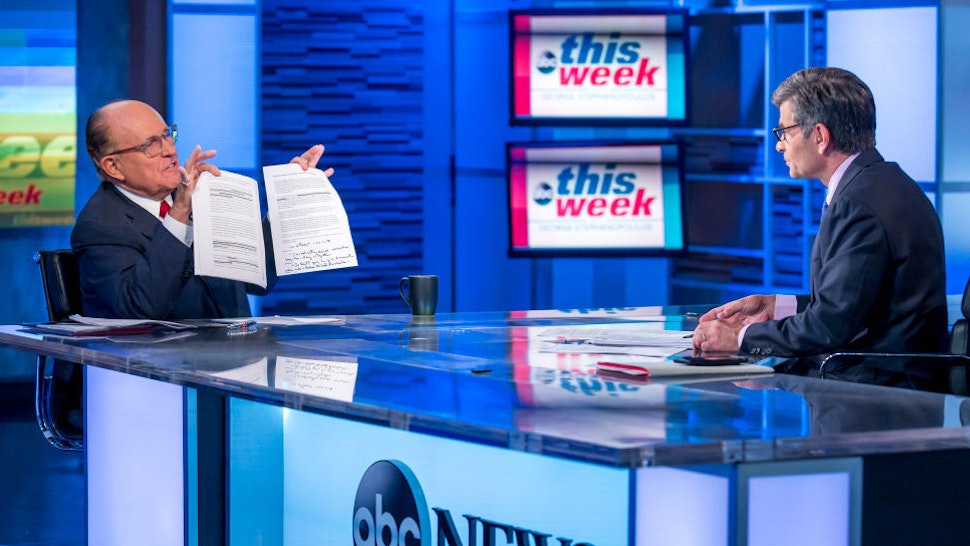 “Here’s my choice: I deal with the [Former FBI Director James] Comeys of the world, or I deal with Rudy,” he said, citing his “very bad taste” for the intelligence community, with which Trump has been in a longtime public feud over how they’ve handled his 2016 campaign and the early stages of his presidency.


In an interview Thursday, President Trump, who has been enjoying a victory lap after being acquitted on both articles of impeachment by the Senate last week, openly acknowledged that he sent Rudy Giuliani to Ukraine to pursue corruption investigations and explained his rationale for choosing to use his personal lawyer rather than intelligence officials.


More @ The Daily Wire
Posted by Brock Townsend at Friday, February 14, 2020 No comments: