Those of us who obsessively observe the media never thought we would see a day like yesterday, a day when someone finally got the better of Fox News and Roger Ailes. The infallible network proved itself fallible with two of the biggest strategic errors in the history of its existence. First, The Mighty Fox fired off a snarky but strategically stupid press release that played directly into Donald Trump’s hands. Then, an obviously rattled Megyn Kelly seeking solace from Trump’s withering spotlight, sought that solace in no less than anti-American filmmaker Michael Moore.

To understand just how big of a blunder this is, we have to step back a few months. 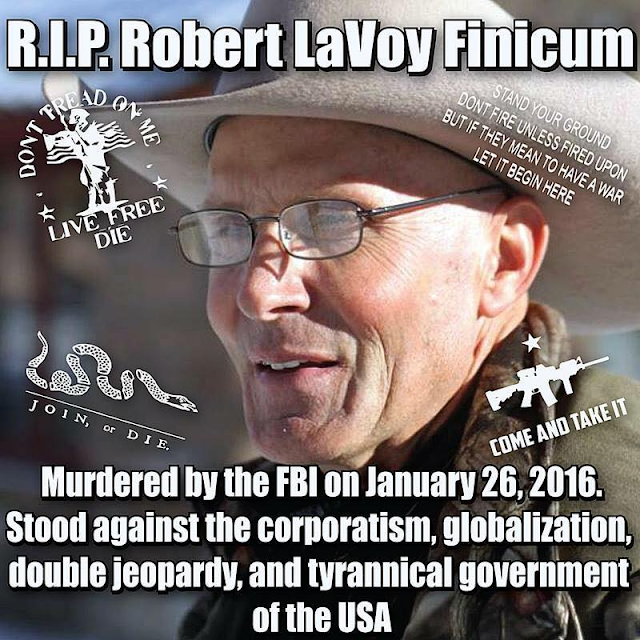 Via comment by Anonymous on “I want the world to know how my father was murder...

Preston James comment. The reporter mentioned in the article is Santilli. Came from VT written by the POS,Gordon Duff who is aiding abetting the FBI.

The Select Few that really run things (the folks that really run the KM hierarchy) need to provoke a total civil war between their DHS, local militarized, dumbed-down mind-kontrolled police versus the patriots, Constitutionalists and everyone who is anti-NWO. This whole event in Oregon is a provocation set up to help produce this total and new American Civil War. The local cops are stupid, the FBI HRT are mind-kontrolled murderers that have a proven track record of murdering innocent women and children in cold blood (Waco and Ruby Ridge). Anyone who has met an HRT sniper knows they are mind-kontrolled and constantly brag, “we are honed to kill”). It was an HRT sniper in a black helicopter that shot two BATF agents through the head which exited the jaws bone on all.

These murders were blamed on the Davidians just like the fed murdered at Ruby Ridge who was back shot by an HRT sniper). What these soulless scum don’t realize that when the select Few are done using them as Cutout they will be quickly disposed of. It’s too soon to know what really happened but normally the FBI needs to murder at least one to get the full machinery of the US Dept of Just-us moving they way they want, so it wouldn’t surprise me if they murdered someone in cold blood. sad that the protesters were themselves conned, misled and provoked. And yes, one of the media guys (arrested too as cover) is a definite FBI undercover who was previously entrapped for mortgage fraud.
Posted by Brock Townsend at Wednesday, January 27, 2016 No comments: 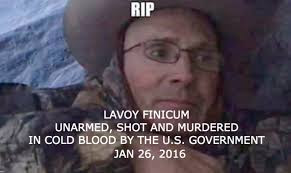 “LaVoy Finicum was murdered. Cold-blooded murder. They shot him with his hands up.”

“I want the world to know how my father was murdered today.

Via comment by Sioux on 1 killed as Ammon Bundy, 4 others arrested in Oreg..." Daughter of Finicum says that her father had his hands up when the FBI ambushed them - that there were snipers in the trees. Ammon's body guard disputes what the daughter says. He stated that Finicum charged the FBI men... with his hands up, I wonder? Sickening and wrong, but not surprising." 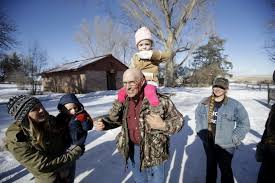 "His hands were in the air and he was shot in the face by the American authorities. Ammon Bundy reported there are 6 witnesses to this evil.”
Posted by Thara Tenney on Tuesday, January 26, 2016

Her testimony was echoed by another eyewitness, Victoria Sharp, who was in the car with Finicum when the group were pulled over by cops and federal agents. Sharp claims that Finicum put his hands out of the car window and asked the police to allow the women to leave the car.

“They shot at him, but they missed him,” said Sharp, adding that the group then attempted to drive away in the car but were shot at again by police.

“When we crashed and stopped for a second, he got out of the car, he had his hands in the air, he’s like ‘just shoot me then’….and they did, they shot him dead,” said Sharp.

“He was just walking, with his hands in the air, I swear to God, and they shot him dead and after he was down on the ground, shot him three more times,” said Sharp, adding that the vehicle was again “bombarded with bullets” as well as tear gas rounds.

Sharp says that the group tried to “find something white” so they could display it as a sign of surrender. She challenges news reports that only six shots were fired, asserting, “they shot at least 120 shots altogether.”

Sharp also claims that none of the individuals in the car pulled out a gun at any point and that the incident was an “ambush” with “FBI snipers in the trees” surrounding the vehicle.


This is another protestor who got suicided by the gooberment. Sounds familiar to me...There is a long list of such folks who defied the big boys. Some are dead, some are in prison..it is obvious that the cost is very high if you make a stand for justice in crazy-controlled land. Such men and women of the world are our beacons of bravery.
Nancy

The murdered man in Oregon is Lavoy Finicum from Arizona. Last week the dictatorship seized his four foster children from his home in retaltiation for his support of the Malheur occupation. The following comes off VNN, which is admittedly not the most solid source in the world, but it seems to have come from another internet source.

"Nevada Assemblywoman Michele Fiore said that Ammon Bundy called his wife, Lisa Bundy, from the back of a police car on Tuesday night.

"Fiore, a vocal supporter of the Bundy family, said that Ammon Bundy told his wife that Finicum was cooperating with police and had put his hands up.

Then, Fiore said, Bundy told his wife that he watched police shoot Finicum three times. She said that Ammon Bundy also said Finicum was on the ground when he was shot."

This sounds like an extrajudicial execution under the National Defense Authorization Act of 2011, and as such it is perfectly "legal" in Obama's America.
Posted by Brock Townsend at Wednesday, January 27, 2016 3 comments: