Is It Time for Financial Tough Love in Your Family?

These parents have gone overboard to the point of idiocy. Should be a parody.

I want to address a common issue these days for "empty nester" parents. How much and in what forms do you financially help your adult children? Over the last two years, this has been our experience.

First, let me tell you about us. My husband is in his late sixties, and retired from law enforcement and is living on a pension. He was diagnosed with throat cancer last year and with God’s grace and first class medical treatment, he is doing all right. I have a good job in a medium size city. I am in my mid-fifties. We live in a modest home on a suburban acre. We have been married 24 years in a second marriage and our (FIVE) children are from our first marriages.

Here are the kids (most are in their mid-thirties):

Posted by Brock Townsend at Friday, March 16, 2012 2 comments: Links to this post

Before his death, Osama bin Laden boldly commanded his network to organize special cells in Afghanistan and Pakistan to attack the aircraft of President Obama and Gen. David H. Petraeus.

“The reason for concentrating on them,” the al-Qaeda leader explained to his top lieutenant, “is that Obama is the head of infidelity and killing him automatically will make [Vice President] Biden take over the presidency. . . . Biden is totally unprepared for that post, which will lead the U.S. into a crisis. As for Petraeus, he is the man of the hour . . . and killing him would alter the war’s path” in Afghanistan.

The Day It Became the Longest War

The irony is that it began to end only when President Richard Nixon, after some backstage maneuvering on the international scene, did precisely what the Joint Chiefs of Staff had recommended to President Johnson in 1965. Why had Johnson not only dismissed their recommendations, but also ridiculed them? It must have been that Johnson had lacked something. Maybe it was foresight or boldness.

Maybe it was the sophistication and understanding it took to deal with complex international issues. Or, since he was clearly a bully, maybe what he lacked was courage. We will never know. But had General Wheeler and the others received a fair hearing, and had their recommendations received serious study, the United States may well have saved the lives of most of its more than 55,000 sons who died in a war that its major architect, Robert Strange McNamara, now considers to have been a tragic mistake.

More @ HNN
Posted by Brock Townsend at Friday, March 16, 2012 No comments: Links to this post 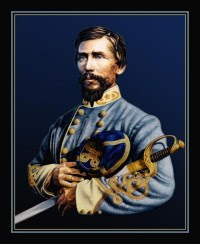 Do you remember the 1961 weekly television series, entitled “The Americans?” This wonderful-educational show centered around two brothers who fought on opposite sides of the War Between the States—Confederate Corporal Jeff Canfield played by Richard Davalos and Union Corporal Ben Canfield played by Darryl Hickman. Their Father, Pa Canfield, was played by the late great John McIntire. The wonderful theme music was produced by Hugo Friedhofer and original music by Bernard Hermann. Why don’t they make shows like this anymore?

When I was growing up near Atlanta, Georgia, young people could recite the words to the United States Constitution and knew the history of those who gave us our freedom. Politicians in their speeches proudly quoted from American Patriots like; George Washington, Thomas Jefferson and Robert E. Lee.

Who was Patrick R. Cleburne?

Patrick Ronayne Cleburne was born on March 17, 1828, in Ovens, County Cork, Ireland. He was an Anglo-Irish soldier who served in the 41st Regiment of Foot of the British Army. He is, however, best known for his service to the Confederates States of America during the War Between the States.

He was only eighteen months old when his Mother died, and a young fifteen when his Father passed away. He tried to follow in his Father’s footsteps, Dr. Joseph Cleburne, in the field of medicine but failed his entrance exam to Trinity College of Medicine in 1848. He immigrated to America three years later with two brothers and a sister and made his home in Helena, Arkansas.

In 1860 Cleburne became a naturalized citizen, lawyer and was popular with the residents.

He sided with the Confederacy at the outbreak of the War Between the States and progressed from the rank of private of the local militia to major general.

Cleburne, like many Southerners, did not support the institution of slavery but chose to serve his adopted country out of love for the Southern folks and their quest for independence. In 1864, he advocated the emancipation of Black men to serve in the Confederate Armed Forces. In early 1865, his dream became a reality but it was then too late—the war was lost.

Cleburne participated in the Battles of Shiloh, Richmond, Perryville, Stones River, Chickamauga, Missionary Ridge, Ringgold Gap and Franklin. He was killed at the Battle of Franklin, Tennessee, on November 30, 1864.

Due to his brilliant strategy on the battlefield Gen. Patrick R. Cleburne was nicknamed “Stonewall Jackson of the West.”

Cleburne said before his death at the Battle of Franklin:

“If this cause, that is dear to my heart, is doomed to fail, I pray heaven may let me fall with it, my face is toward the enemy and my arm battling for that which I know is right.”

He was engaged to Susan Tarleton of Mobile, Alabama.

On March 17, 1979, Saint Patrick’s Day, and Cleburne’s birthday, I organized the Gen. Patrick R. Cleburne Camp 1361 of the Sons of Confederate Veterans in Jonesboro, Georgia. The Confederate Cemetery in Jonesboro is also named Pat Cleburne Cemetery.

An excellent book “A Meteor Shining Brightly” Essays on Maj. Gen. Patrick R. Cleburne”—edited by Mauriel Phillips Joslyn, is a good source of information about Cleburne.

The War Between the States Sesquicentennial, 150th Anniversary, runs 2011 through 2015. The Georgia Division Sons of Confederate Veterans joins the nation in remembering this historic time in our nation’s history. See more information at: http://www.150wbts.org/

While most Americans have some knowledge of the GOP Primary, few have any idea of the Sesquicentennial (the 150th Anniversary of the Civil War) and the events occurring in the Southern movement. And yet, what is occurring is like mirror reflections of one another.

Let's start with what most people know about, the GOP primary. Mitt Romney is the sweetheart of the northeast Republicans. He is super rich, someone keenly involved in the international economy. He is a social liberal, the father of Romney Care, the proto type of Obama Care. He is not Christian, or atleast his faith, Mormonism, is not Christian and this suits the northeast elite who revile the Christian faith. God has no place at the governing table. Heavily Catholic in the northeast, it is also heavily liberal. Abortion starts and ends there, along with feminism.

There is a strong Jewish constituency in the northeast, and though divided on many issues, many Jews see America as an extension of Israel. Not the other way around... American foreign policy revolves around Israel. We are in two wars, and threatening a third for Israel's security not our own.

Former Governor of a blue, dark blue state, Mitt Romney is keenly aware of all the above.

But Romney can't win a majority of Republican votes anywhere.

President Obama’s 2013 budget would add $3.5 trillion to annual deficits through 2022, according to a new estimate from the Congressional Budget Office (CBO).

It also would raise the deficit next year by $365 billion, according to the nonpartisan office.

The CBO estimate is in sharp contrast to White House claims last month that the Obama budget would reduce deficits by $3.2 trillion over the next decade.

The Obama 2012 campaign has released a short film called “The Road We’ve Traveled,” detailing the challenges faced by President Barack Obama’s administration from day one through the start of the campaign.

But it’s not all roses for team Obama: part of the film contains a gross inaccuracy. Specifically, it claims that General Motors (GM) has fully repaid its federal bailout loan. It has not — meaning the documentary contains a $25 billion error.

Here is a price list for some popular weapons in Mogadishu’s arms market:

Should the Confederate flag fly outside of the new Museum of the Confederacy-Appomattox when it opens later this month?

March 17, 2012 9am – 5pm 21st Annual Emerald Isle St. Patrick’s Festival presented by Transportation Impact on Saturday, March 17th from 9am-5pm at the Emerald Plantation shopping center. Admission and parking are free for the festival. This year’s festival will feature over 75 arts and crafts vendors, food vendors, clowns and static displays along with amusement rides, a climbing wall, face painters, and many other fun, family-oriented activities. As always, the festival will feature delicious foods such as corned beef and cabbage, shrimp burgers, hamburgers and hot dogs, Mediterranean cuisine, BBQ, funnel cakes, fried peanuts, cotton candy and much, much more. Festival goers can also enjoy a beer garden. The Little Ms. & Mr. Leprechaun Contest will take place on the main stage at 11am. The contest is for boys and girls ages 2-3 and 4-5 with each participant being judged on the originality and creativity of their costume and overall stage presentation. Contest organizers require pre-registration by 12pm on Friday, March 16th and ask that participants be under the main stage’s tent by 10:30am on the day of the event. Please contact 252.354.6350 to register. View Full Details Here!