Move over, George Washington. Nice try, FDR. You did your best, Abraham Lincoln, but there’s a new candidate making his way to the top of the Greatest Presidents of All Time heap. In a recent interview with The Guardian, David Lynch suggests Donald Trump might “go down as one of the greatest presidents in history.” Not because of any legislative, humanitarian or geopolitical action on his part, of course, but because Trump successfully “disrupted” the system in a revelatory way.

“He could go down as one of the greatest presidents in history because he has disrupted the thing so much. No one is able to counter this guy in an intelligent way,” explained the Twin Peaks creator.

Rep. Steve King: “America is heading in the direction of another Harpers Ferry. After that comes Ft. Sumter.” 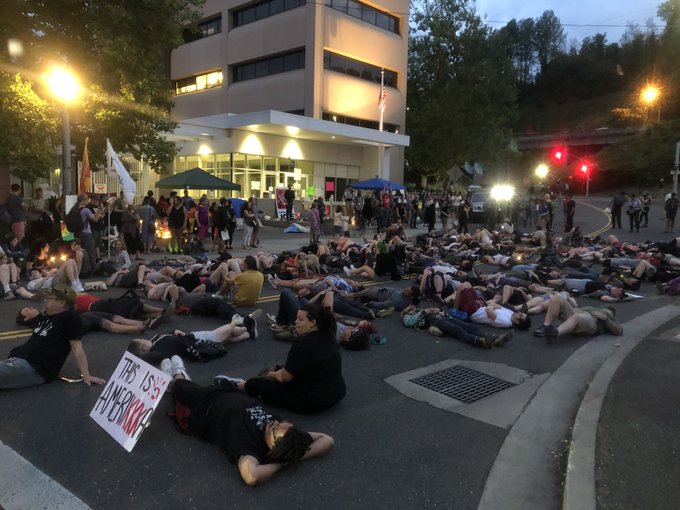 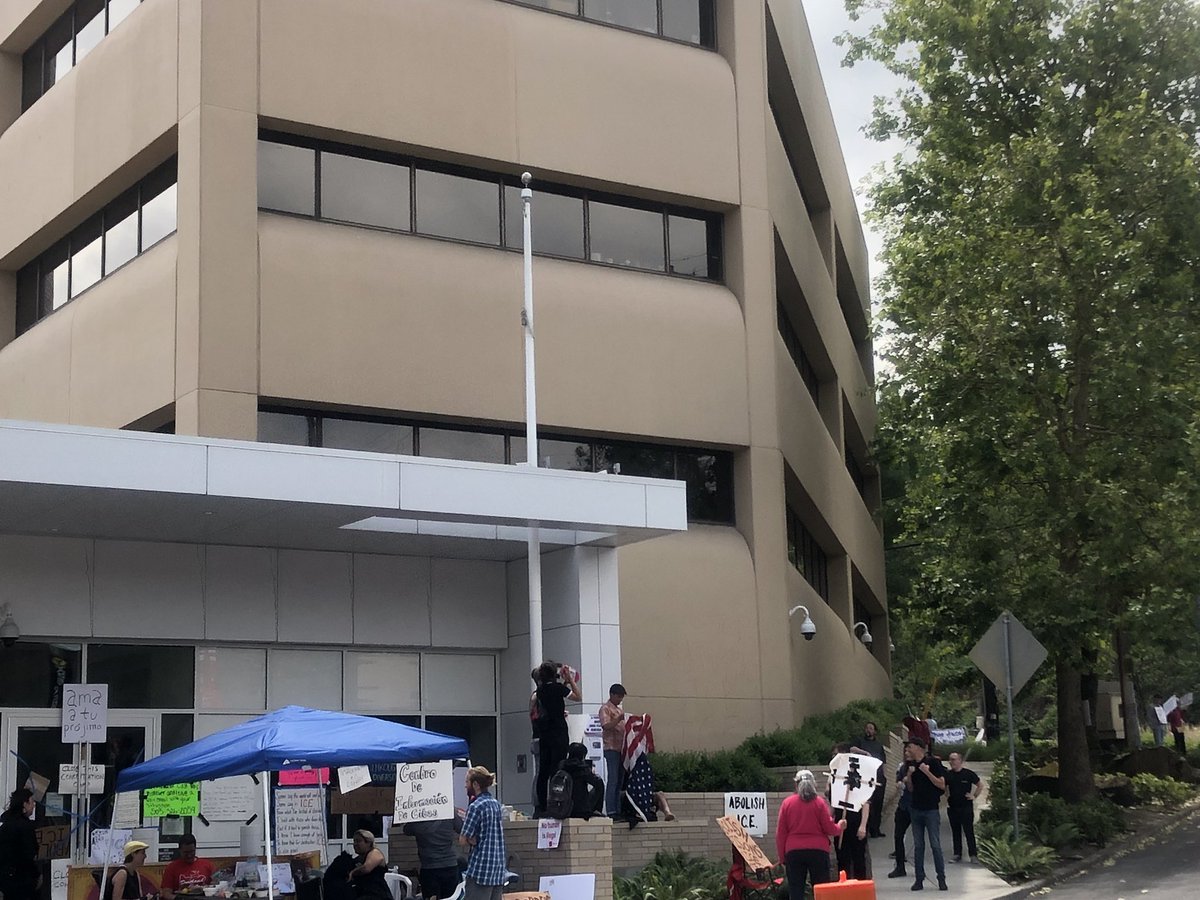 Rep. Steve King posted a warning on Twitter Sunday evening that the U.S. is heading toward a second civil war, comparing the present day actions of the anti-Trump resistance to the run-up to the Civil War.
King, an eight-term Congressman from Iowa, keyed off a PJ Media article about leftist protesters shutting down a Portland, Oregon ICE office and taking down the U.S. flag, replacing with an “Refugees Welcome” flag. After retiring from the Army after 22 years of honorable service, I taught high school JROTC for seven years in a large, award-winning, program. When the principal of the school tried to illegally fire me, we sued in Federal District Court and won on a requested settlement by the school district.

The issue: a parent-school issue...not my job as the Chair of the JROTC Department. I asked if my son could wear his Dixie Outfitter t-shirt and the principal decided I should be fired. After winning, I found that I was in a hostile work environment and applied to teach graduate studies at the US Army Command and General Staff College, Fort Leavenworth, Kansas. I had taught there before.

In 2004 I returned to the faculty and garnered excellent annual ratings for thirteen years. However, a fellow faculty member and my new supervisor at the campus I transferred to in 2011 decided that my pro-Southern sympathies were not politically correct. They filed a formal complaint against me and threatened punishment. Despite just receiving another excellent annual report in 2017, I was told I was being terminated. No reason was given but it is obviously that the issue that garnered a formal counseling and threat of punishment previously, was being made good-on.

I lost my job due to the complaints of a couple of carpetbaggers who do not understand Southern culture and automatically assume anyone who is proud of their Southern heritage is a “racist”. In fact, a teaching colleague, Joe Judge, accused me twice of being a member of the KKK for this very reason. He had no evidence or proof of racism, only the fact that I am proud of my Southern ancestors.

'OBAMA KEPT THEM IN CAGES, WRAPPED THEM IN FOIL' 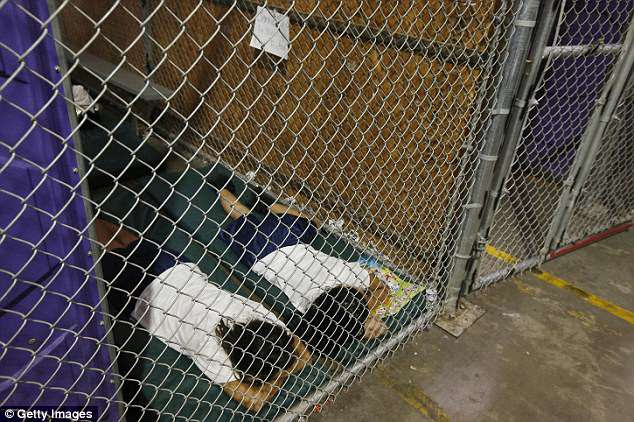 Chiseled Sentinels of the Confederacy

“Whom shall we consecrate and set apart as one of our sacred men? Sacred, that all men may see him, be reminded of him, and, by new example added to the old perpetual precept, be taught what is real worth in man. Whom do you wish to resemble? Whom do you set on a high column, that all men looking at it, may be continually apprised of the duty you expect from them?” Charles Francis Adams, 1907.

The following is excerpted from Hodding Carter’s essay “Statues in the Squares” from Robert West Howard’s “This is the South,” published in 1959.
Bernhard Thuersam, www.Circa1865.org  The Great American Political Divide

Chiseled Sentinels of the Confederacy

“[The] statues in the [town] squares [across the South] are more than symbols of gallantry in defeat, or the defeat of gallantry. They are also reminders of, and, in an unstated way, a kind of recompense for the inexcusable aftermath of military subjugation; for they supplanted the plunderers of Reconstruction, whose memory still brought in my boyhood ready curses from the aging veterans of whom we were so proud and not a little afraid.

And it was these old men and their ancient womenfolk, unreconstructed and unforgiving, who passed on to sons and grandsons the truth and legends of wrongs which, in the commission and the remembering, make up the saddest of our nation’s multiple legacies.

And statues are reminders, lastly, of the true nature of the Southern past and of the South’s folk heritage; for beneath the romantic overlay so greatly inspired by a Scots novelist’s tales of knightly derring-do was a frontier land, the stamping ground of Davy Crockett and Mike Fink, of Andy Jackson and Sam Houston, of Nolichucky Jack Sevier and Oglethorpe’s paupers and the unsubdued sons of clansmen who fought at Culloden.

The warriors in marble bespeak that frontier whose hallmarks are the ready rifle and the white-hot temper, the violent workings of a code of honor, a mistrust of the intruder, and the feudal unity of a people whose fields were bounded all around by wilderness.

Because this is so, because the chiseled sentinels of the Confederacy evoke the frontier as surely as they recall a war and a defeat and a needless, consequential humiliation, I would choose first as their companion figures the likenesses of men whose abilities the frontiersmen respect above all others, or whom they would identify with themselves.

It is understandable, since the vanquished always remember the longest, that the South should have so lavishly memorialized her Confederate dead. They died in a war that their survivors lost. Above their graves a nation in being was pounded to nothingness. Understandable, and sad.

For before and after them were other Southerners who fought in other wars. While some of these have been remembered, few of them have been honored enough. Where are the statues to Jeff Davis’ Mississippians and those other soldiers of the Deep South who principally fought the Mexican War?

Lastly, I would erect somewhere in the South, preferably deep in the lower Mississippi Valley, another statue, as anonymous and as representative as the graven Confederates of the courthouse squares, but, unlike these, neither armed, or uniformed.

The figure would be clad in the work clothes of a farmer or the rough garb of a riverman or the unstylish everyday suit of a small-town citizen. His face would reflect the toil, the frustrations, and the sufferings of a people who have passed through a succession of ordeals such as no other Americans region has known: the ordeals of flood and of decimation by malaria and yellow fever; the ordeals of military defeat and of political grinding-down and agricultural ruin and long poverty.

The eyes of this unknown and unsoldierly warrior would be fixed upon the far horizon of the frontiersman; and in the set of his shoulders a sensitive observer would perceive the glory of an indestructible people whose struggle for their rightful place in the sun is all but ended.”
Posted by Brock Townsend at Sunday, June 24, 2018 No comments:

Study: Prescription and over-the-counter drugs good to use after 15 years from expiration date. With a splitting headache, you reach into your medicine cabinet for some aspirin only to find the stamped expiration date on the medicine bottle is more than a year out of date. So, does medicine expire? Do you take it or don't you? If you decide to take the aspirin, will it be a fatal mistake or will you simply continue to suffer from the headache?

This is a dilemma many people face in some way or another. A column published in Psychopharmacology Today offers some advice.

It turns out that the expiration date on a drug does stand for something, but probably not what you think it does. Since a law was passed in 1979, drug manufacturers are required to stamp an expiration date on their products. This is the date at which the manufacturer can still guarantee the full potency and safety of the drug.

The world is looking to Ameriaca for leadership again

The DOJ’s IG report released by Inspector General Horowitz contains an entire Appendix (No. 2) that was totally redacted from the report. It was labeled “Law Enforcement Sensitive”. It’s now being reported that the Appendix contains damaging information on the Obama Administration’s former AG Loretta Lynch.

Although it was not reported, IG Horowitz’s report on “A Review of Various Actions by the Federal Bureau of Investigation and Department of Justice in Advance of the 2016 Election” contained two Appendices and the second Appendix was totally redacted and left out of the report.


More @ The Gateway Pundit
Posted by Brock Townsend at Sunday, June 24, 2018 No comments:

U.S.’s immigration policy is “very unfair to all of those people who have gone through the system legally" President Trump on Sunday called for immigrants who illegally enter the U.S. to be sent “back from where they came” without going through the judicial process in deportation cases.
“When somebody comes in, we must immediately, with no Judges or Court Cases, bring them back from where they came. Our system is a mockery to good immigration policy and Law and Order,” Trump tweeted.

He added that the U.S.’s immigration policy is “very unfair to all of those people who have gone through the system legally and are waiting on line for years” and “must be based on merit.”

"Do ABC lawyers get combat pay?" 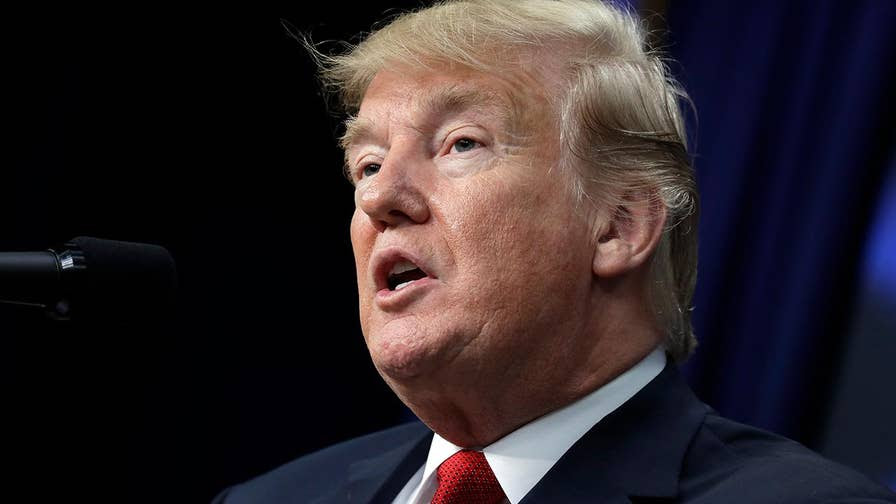 Media criticism of President Trump’s immigration policy reached a fever pitch this past week, as the president was demonized and called every name in the book, while some members of his administration and family were threatened and harassed.

In theory, it was all part of the immigration fight. In practice, it was one more opportunity for Trump-haters to launch extreme attacks against the president and those close to him. 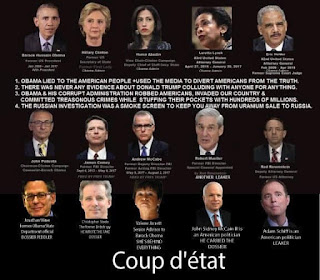 Immigration and the Democrats 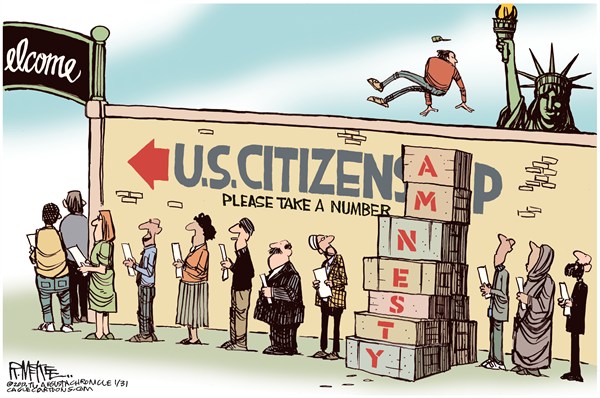 Although a number of national polls show majorities in support of granting legal status to illegal aliens, immigration is really an issue for a zealous minority of voters.  A New York Times analysis of the issue found that "among those who say immigration is their top issue, opponents outnumber supporters by nearly two to one."

Whether it's gun control or open borders, Democrats are a potential constituency not to be ignored by conservatives – both issues marshal opponents more than they motivate supporters.

Walter Shaub, the former ethics director under Barack Obama, comically accused White House press secretary Sarah Sanders of violating ethics laws when she revealed she had been kicked out of a restaurant because she works for the president of the United States.

Shaub sanctimoniously tried to score virtual-signaling points by tweeting: “Sarah, I know you don’t care even a tiny little bit about the ethics rules, but using your official account for this is a clear violation of 5 CFR 2635.702(a)