Hellstorm: The Rape of Germany (Preview

I posted this in 2014 but see the video has been erased. 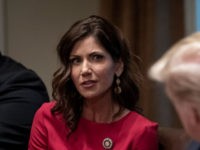 Governor Kristi Noem (R-SD) noted Sunday on ABC’s “This Week” that during the 2000 election, former Vice President Al Gore was given 37 days to run the process of legal challenges to the election.
Therefore, she said we should “afford the 70.6 million Americans that voted for President Trump the same consideration.”

BREAKING NEWS IN GEORGIA - 132,000 Ballots in Fulton County, Georgia Have Been Identified Which Are Likely Ineligible Kyle Becker and People’s Pundit on Twitter announced moments ago that 132,000 ballots in Fulton Country Georgia are likely ineligible.

32,000 “Change of Address” RED FLAGS in Fulton County, GA. These votes are “highly likely ineligible to vote and have moved,” per source.

Biden leads Georgia by 10K votes as of last update.

"They are stealing your country . . . can you live with that?" 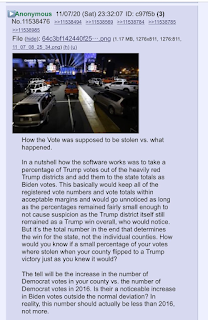 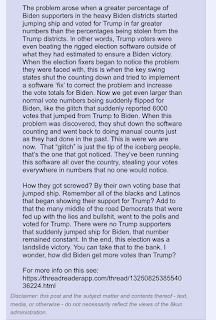 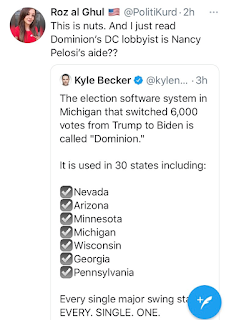 8 Same software used in Democrat primaries against Sanders.
9 in a Video interview with Mara Bartiromo, Fox Biz Network  she mentioned Hammer and Scorecard "Livefeed" software developed by CIA. Vote switches on computer in the blink of an eye.

LINK
Posted by Brock Townsend at Sunday, November 08, 2020 No comments:

Gingrich: Democrats "Stole What They Had To Steal" & Graham to donate $500K to Trump's legal defense fund & If Trump concedes election, Republicans will 'never' elect another president

Gingrich: 2020 Is A Corrupt, Stolen Election, Democrats "Stole What They Had To Steal"

Why Trump Should Keep up the Fight by Nigel Farage

My awareness of the damage that postal voting has done in Britain tells me that Donald Trump is right to fight on in the U.S., though he does need to find sufficient evidence.

I spent the last eight days of the presidential campaign traveling to many states and following the Trump train. From the freezing cold of Michigan to the raw northernly winds of Arizona, what I witnessed was truly astonishing. Trump was in the political form of his life, addressing huge crowds and speaking at up to five rallies per day. His stamina and force of personality are extraordinary. With his party trailing the Democrats in all of the contests, he quickly started to gain momentum after the second debate, in which he performed well.

It is almost exactly 20 years since Tony Blair introduced postal voting on demand in Britain. As with so many things involving Blair, it has been disastrous. In the early years, no proof of identity was even required to vote in this way. This ridiculous system has contaminated British politics.

While many court cases concerning postal vote fraud have finished with prison sentences being handed down, the widespread scale of abuse is truly incredible. A 2016 government report into the practice found that it is open to "fraud, undue influence, theft and tampering." To this I would add that that Left is much better than the Right when it comes to cheating.

'Awakened a sleeping giant': Parler jumps to most popular app as conservatives rally support to leave Twitter and Facebook

Social media platform Parler jumped to the top downloaded app this weekend, as conservatives rally support to leave Facebook and Twitter over censorship.

“The media and the anti-Trump lunatics have awakened a sleeping giant. We gave a collective middle finger to the tech tyrants as Parler remains the NUMBER ONE most downloaded app in the world. Thank you!” conservative commentator Dan Bongino said Sunday morning.

North Carolina and the Fate of the American Republic

Despite what some of the reprehensible media are telling you, the 2020 Election is not over. There has been so much obvious vote fraud and unlawful counting procedure on the Democratic side that counting the vote correctly is now subject to careful review and remedial direction at the hands of the United States Supreme Court. If you are celebrating a Biden victory, you are foolishly celebrating a national disaster of unprecedented evil too soon.

The North Carolina State Board of Elections (NCSBE) had issued a controversial policy change on September 22, which did not require a witness signature for absentee ballots and also extended the allowable receipt of absentee ballots to November 12. However, it is the North Carolina General Assembly alone and not the NCSBE, the NC Attorney General, or the Governor that has the authority to make changes in voting rules. The NCSBE had acted without NC General Assembly authority and dangerously close to the November 3 Election to make such changes. Fortunately, on September 30, U S. District Court Judge William Osteen, Jr harshly rebuked the NCSBE’s brand new policy for handling absentee ballots and ordered its implementation to cease.

“This Felt Like a Drug Deal!” – Asian-American Ballot Observer in Detroit Describes Mysterious Van Dropping Off 61 Boxes of Ballots at 4 AM (VIDEO) FYI – There is much more information to come out of Michigan.

Greg Kelly from NewsMax: “Everything You’re Seeing Tonight is an Illusion – Even the Term “President-Elect” Is an Illusion” (Video)

Greg Kelly had this to say about his former employer, “FOX News has lost all legitimacy. FOX News was founded as an alternative to the mainstream media… Now it appears FOX News is more concerned what The New York Times writes about them than what the audience thinks about them.”

Kelly then added, “Everything you’re seeing tonight is an illusion. There is no president-elect. Even the term “president-elect” is a media fabrication. We don’t have a president-elect until the electors come and they nominate a president-elect and that happens sometime next month. This is still in dispute… Constitutionally though nothing significant has happened.”

My phone and email have been non-stop since Tuesday. But the conversations started to take a different

turn after the Enemy Media came out yesterday and anointed Biden the President. It seems people are already trying to figure out how to survive the next four years and VOTE HARDER in 2024.

Look, I actually believe Trump won in a landslide the night of the election. Let not your eyes be deceived. Trump was gathering tens of thousands of people to his rallies, while Biden could barely scrounge up ten to sit in their cars. There was absolutely no enthusiasm for Sleepy Joe and Legs in the Air Harris. None! Do you really think they received more votes than Obama in his landslide victory? There’s a reason the Democrats were not worried and hiding Biden in his basement. They knew the fix was in. The final stage of their coup was about to take place.

For those of you that might have tuned in and did not see Fox News’ “Justice” with Judge Jeanine Pirro on Saturday night, sources told Newsmax the show was suspended over a spat on the network’s coverage of President Donald Trump.

Sources close to the network tell Newsmax, because she made a very staunch defense of President Trump and wanted to expose the vote fraud that took place in the election, Fox News decided not to air her show. It had extended coverage of Democrat Joe Biden’s acceptance speech of a contested election.