Behind enemy lines: Secrets of US Special Forces who were stationed in Berlin to bring down the Soviet Union from within are finally revealed


The secret exploits of the men stationed in Berlin to sabotage the Soviet Union from within had the Cold War turned hot have been revealed for the first time.

Incredible images show the men from the clandestine Special Forces Berlin unit, which the USA only revealed existed in 2014, on training exercises and meeting up in casual wear.

Other shots show the graffiti-clad Berlin Wall with Soviet soldiers patrolling along the top, tunnels and sewers the Special forces used and various identity cards the undercover soldiers used.

Oil exploration that started in 2008 has paid off for Spanish oil company Repsol and its U.S. partner, Armstrong Energy. Roughly 1.2 billion barrels of light crude are available in Alaska’s North Slope and ready to come up in 2021.

“The successive [exploration] campaigns in the area have added significant new potential to what was previously viewed as a mature basin,” the company said in a statement posted to its website on Friday. “Additionally Alaska has significant infrastructure which allows new resources to be developed more efficiently. […] Preliminary development concepts for Pikka anticipate first production there from 2021, with a potential rate approaching 120,000 barrels of oil per day.”

In January Starbucks Corp. CEO Howard Schultz announced that the company would hire 10,000 refugees over the next five years after President Trump announced his temporary ban on refugees from terror states.

The Starbucks stock crashed after the announcement.

And customer sentiment has not yet recovered since the political stunt by CEO Howard Schultz.

In 2009, then-Secretary of State Hillary Clinton met with Russian Foreign Minister Sergei Lavrov and presented him with a gift: a plastic reset button with the Russian word peregruzka emblazoned on its face. Unfortunately, the word did not actually mean “reset” in Russian; instead, it translated as “overcharged.” That faux pas came to define U.S.-Russian relations during Barack Obama’s presidency.

From that point forward, Obama and Clinton not only failed to improve relations with our long-time adversary, they further eroded trust and cooperation between the countries. At one point, a petulant Obama even called off a scheduled meeting with Russian President Vladimir Putin.

It’s one thing for Democrats to make a mess of America’s relations when they hold the reins of power, but now they’re hell-bent on making sure President Donald Trump can’t begin to repair the tattered relationship with Moscow. As if the silly reset stunt and eight years of Obama’s global apology tour weren’t harmful enough.


More @ The Patriot Post
Posted by Brock Townsend at Saturday, March 11, 2017 No comments:

Tea Party groups can now fully assess the degree to which they were targeted, despite IRS claims to the contrary.

It is astonishing how much is being revealed about the “Deep State” since Donald Trump was inaugurated less than two months ago.

This week, Wikileaks published almost 9,000 documents from the CIA about the agency’s own malware used to hack into anyone’s electronics make it look like the cyber-attack came from Russia.

Now, after years of struggling for real justice from the Obama Administration that falsely claimed Tea Party groups were never targeted, citizen activists now have access to nearly 7,000 documents related to the illegal man-handling of their tax status applications by the Internal Revenue Service.


This week’s edition of the Appalachian Messenger has articles by:

Robert Gore
The Ruler of the World

T. L. Davis
Sometimes, You Have To Fight

How Trump and Bannon Could Restructure US Politics Overnight


We live in a world where we can get nearly everything instantly.

Simply and rightly, we have come to expect our decisions to yield instant results from the systems that serve us.

Well, that's true for every system except our political system.

We're only allowed to interact with our political system, in a meaningful way, only once every two years and only then by filling out a multiple choice quiz in an election booth.

That's akin to an Internet that only available for a couple of hours every two years at 1,200 baud.

Recently unsealed records reveal a much more extensive secret relationship than previously known between the FBI and Best Buy's Geek Squad, including evidence the agency trained company technicians on law-enforcement operational tactics, shared lists of targeted citizens and, to covertly increase surveillance of the public, encouraged searches of computers even when unrelated to a customer's request for repairs.

Via comment by EIEIO on College Campus Disgrace: Time for taxpayers to sto.

In case anyone had any doubt - yes, the insane members of the "elite" do eat human body parts, and yes, they have tried to mainstream cannibalism and make it normal. They encourage the masses to participate in cannibalism by promoting things like eating placentas. Here we see that placenta is on their menu. To see their whole sick website, click on this link:


House Republicans are gearing up for a vote next week on legislation that would make it easier to fire, demote and strip bonus awards from corrupt or negligent officials at the Department of Veterans Affairs.

The vote will come nearly three years after Congress acted to punish VA workers involved in healthcare scandal. In 2014, it was revealed that VA workers around the country were systematically cooking the books to make it look like veterans didn't have to wait very long for a medical appointment.

But three years later, the 2014 bill is a proven failure when it comes to disciplining VA employees, Just a handful were ever fired, and many were allowed to retire with full benefits, a performance record that has drawn complaints from Congress for the last two years.

The liberal media is cheering the assault of Lucian Wintrich — a gay conservative whose Jewish grandfather fled the Nazi regime in World War II.

Then Decker started reportedly “screaming” and pointing that Lucian is a “Nazi” and The Gateway Pundit is a “white supremacist” website!

And this guy works for FOX RADIO! 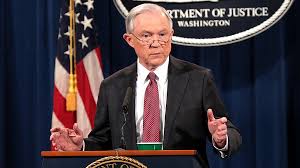 Sessions asked for the federal prosecutors to resign "in order to ensure a uniform transition," DOJ spokeswoman Sarah Isgur Flores said in a statement. A key environmental justice leader at the Environmental Protection Agency has resigned, saying that a recent budget proposal to defund such work would harm the people who most rely on the EPA.