"We are living through an iconoclastic terror in which irreversible and unforgivable damage will be done to our cultural heritage."

It is an atrocity and a tragedy not unlike the Spanish Red Terror – when Communist revolutionaries desecrated Catholic churches and massacred Catholic clergy, even going so far as to exhume and execute in effigy the corpses of monks and nuns. For what is a monument but a symbolic grave – a grave for the memory, if not the body, of a person, or a people? Yet we, the Southern people, do not live in bronze or stone. As horrible as it is to lose our monuments, that is not to lose everything. We must become ‘living monuments’ of our people. The virtues that we admire in our heroes and that we once memorialised in these beautiful works of art? Now, more than ever, we must embody those virtues ourselves and make our lives beautiful. Our ancestors’ graves may be desecrated, but even if their memories are exhumed and executed in effigy, they themselves cannot be killed – and it is not because they are already dead. It is because they live in us.

HOW DEMOCRATS PLAN TO STEAL THE 2020 ELECTION

Biden isn’t alone among Democrats and their media allies suddenly warning with great excitement that Republicans are going to lie, cheat, steal and collude with foreign powers to win in November. They’re all saying it.

"How Trump Will Try to Steal the Election” headlines a Washington Monthly story, saying “If voter suppression and foreign influence don’t work, he’ll contest the results." The Atlantic’s “How Donald Trump Could Steal the Election” contends “The president can’t simply cancel the fall balloting, but his state-level allies could still deliver him a second term.” Then there’s the Guardian, with "'It's all rigged':

Trump foreshadows how he could undermine presidential election," and Salon, with “Here's how Trump will steal the 2020 election,” alleging “the Republican Party has refined its strategy of voter suppression, voter intimidation and vote theft in elections across the country.” But the grand prize goes to the Daily Beast for this headline: "This Is How Republicans Steal an Election, and Maybe Kill Some Dems in the Process." 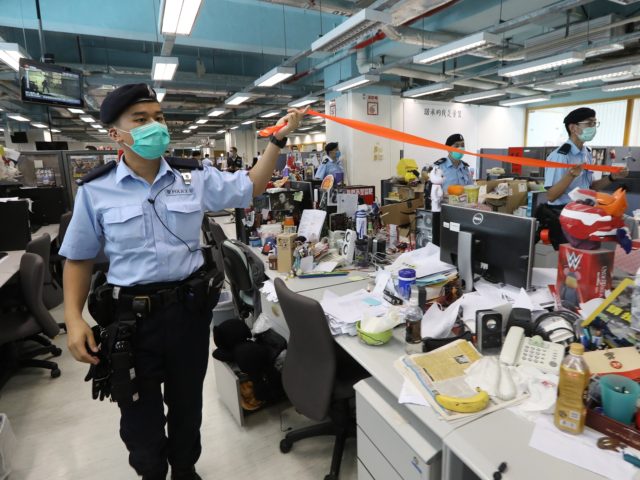 Nearly 200 police officers swarmed the offices of Apple Daily, one of Hong Kong’s most-read anti-communist newspapers, on Monday, arresting owner Jimmy Lai, two of his sons, and several other staffers.

Lai, arrested twice already in 2020 for his opposition to Chinese communism, will now reportedly face charges under the “national security” law passed illegally through Beijing’s parliament in May. The law commands a minimum of ten years in prison for anyone found guilty of “terrorism,” “secessionist” crimes, enabling “foreign interference,” or “subverting” state power. As Lai is currently 72 years old, he faces spending the majority of the rest of his life behind bars.

On Saturday, August 1, several TV media stations reported that there was a peaceful Black Lives Matter (BLM) rally in Greenville, South Carolina, to protest a monument honoring Confederate soldiers.  Actually, there were five people arrested at this rally, where the counter-protest conservatives outnumbered BLM at least five to one. One local Greenville paper estimated there were about 30 BLM protesters and 150 counter-protesters, but an eye-witness on the counter-protest side, who was there all day, gave a more precise, detailed, and interesting estimate of the crowd of well over 300 counter-protesters, not counting nearly 200 passing automobiles visibly and audibly siding with the pro-Confederates.

Following a scare at the White House where the Secret Service had to evacuate the briefing room as President Donald Trump spoke to reporters, the president asserted that the Barack Obama administration may be guilty of treason.

When asked by the One America News White House correspondent Chanel Rion about the possibility of Susan Rice being chosen as a running mate by former Vice President Joe Biden, President Trump did not hold back.


More @ The Gateway Pundit
Posted by Brock Townsend at Monday, August 10, 2020 No comments:


We’ve all seen that Antifa/BLM has blinded the border patrol agents sent to protect federal property in Portland.  Andy Ngo has been directly attacked with a green laser, and he points out that the threat is expanding (via WiscoDave).


After #antifa were dispersed by police following the attack on the East Precinct, they tried to blind a woman at her home with lasers and attacked her.

President Trump’s recent actions indicate the time may be very close where the Deep State and the Obama gang might finally have to face the music.

On Friday we reported that President Trump spoke to workers at a Whirlpool factory in Clyde, Ohio, to tout his efforts to restore America’s manufacturing base.  During the speech Trump also spoke about his work to reform prescription drug pricing by the pharmaceutical industry.


While speaking about reducing drug prices by cutting out the middlemen, Trump dropped this line saying,  “So, I have a lot of enemies out there.  This might be the last time you’ll see me for awhile.”