Protesters at Dartmouth University disrupted students studying in the library, reportedly directing profanity towards white students and physically pushing others.

In a critical editorial, the conservative Dartmouth Review listed some of the epithets hurled by the protesters: “Fuck you, you filthy white fucks!” “Fuck you and your comfort!” “Fuck you, you racist shits!”

In addition, the Review reports that some of protesters became physically violent: “Men and women alike were pushed and shoved by the group. ‘If we can’t have it, shut it down!’ they cried. Another woman was pinned to a wall by protesters who unleashed their insults, shouting ‘filthy white bitch!’
in her face.”

Jewish protests have forced Czech magazine Týden to hastily withdraw an article which indicated that around 60 percent of respondents would vote for Adolf Hitler if he returned today and promised to rid Europe of the current wave of invaders disguised as “asylum seekers.”

Jindal signs an EO directing state agencies to "utilize all lawful means to prevent the resettlement of Syrian refugees."

Via comment by Sioux on The cattleized West, and the first line of defense...

State governments often play a small role in helping to resettle refugees. But despite protests from more than a dozen Republican governors who want to close their states to Syrian refugees, those governors probably have little power to stop them from coming, legal scholars say.

"The one thing I feel very comfortable saying is there is absolutely no constitutional power for a state to exclude anyone from its territories," said Stephen Legomsky, a Washington University of St. Louis law professor and former chief counsel of U.S. Citizenship and Immigration Services in the Obama administration.

A growing number of Republican governors have protested the resettlement of Syrian refugees since the terrorist attacks in Paris last Friday. At least one of the Paris attackers was carrying a Syrian passport — but French officials said Saturday that the passport was a fake.

Still, the Paris attacks have reopened the debate over the Obama administration's decision in September to accept 10,000 Syrian refugees over the next year.

The Republican governors have taken a range of approaches to the issue, but none has explained how they would legally keep Syrian refugees out. Whether states have to actively cooperate those those resettlements is another question, and that's where many of the governors are trying to exert leverage.

The cattleized West, and the first line of defense

1. The bovine-French, panic at mass mourning movement and show of sanctimony
(The most important thing you can do when people you don’t know are murdered by muslims in an act designed to promote the primacy of islam, is show your moral superiority to people who would like to take meaningful action by demonstrating grief.

Not for the dead, but for the temporary damage to the illusion of multicultural socialist utopia. The French have shown they are bronze medal winners after the Soviet Union and the Communist Chinese in that. Just imagine if the whole population of France had not been utterly emasculated by socialism. This attack could have been stopped by a couple of armed men who actually believed in defending themselves. Instead, all they have is what we see today. People tripping over themselves in self sacrifice, trying to tell the people who  want them dead or enslaved how there will be no ‘backlash’ instead of at the very very least, going en masse to the mosques and screaming: “stop the hate”.

Instead, they will save that slogan for Marine Le Pen. The one politician who dares suggest that defending ones rights, liberties and even your lives. And thanks to a world governed by socialist identity politics, it will only be even slightly tolerated coming from a woman. Cause if a man dared say these things he would have to live under 24 hour multiple guards and move locations every night, and that would be from the socialists every bit as much as from the muslims)

After his twenty-thousand men were soundly whipped by eight-thousand Southern men under General A.P. Hill in mid-1864, at least one enemy general realized that only merciless attrition, starvation and destruction could force the Americans he fought to lower their arms.
Bernhard Thuersam, www.Circa1865.com   The Great American Political Divide

“So much has been said about the morale of the Army of Northern Virginia after the Battle of Gettysburg . . . and to say nothing about the splendid fighting of [General] A.P. Hill’s men and the cavalry at Ream’s Station in August 1864, and the almost daily fights that [Gen.] W.H.F. Lee’s cavalry had along the Boydton Plank Road and the Weldon Railroad at Ream’s Station, we swept Hancock’s celebrated 2nd Corps away from our front like the whirlwind.

Nothing stopped us and our force was far inferior [in number] to theirs . . . General A.P. Hill sent . . . for a mounted man who was familiar with the country, and he [Lt. Aldrich] was sent.

When he reported to General Hill, the General said: “Lieutenant, how many men have you with the cavalry?”

Lieutenant Aldrich told him that he had about two thousand and then asked: “General Hill, how many men have you?”

The response was: “About eight thousand, I think.”

Then the General said: “How many men do you think are in front of us Lieutenant?”

To which the Lieutenant replied: “All of Hancock’s troops, I should say about twenty thousand men.”

Lieutenant Aldrich then insinuated that the General was attempting a big job with the force he had.

General Hill then said: “Lieutenant, if we can’t whip them with this proportion we’d better stop the war right now.”

History shows well how he figured. General Hancock, when he returned from the hospital testified to the completeness of [his] defeat and told his Corps that the Confederate army could not be beaten, but must be worn out.” 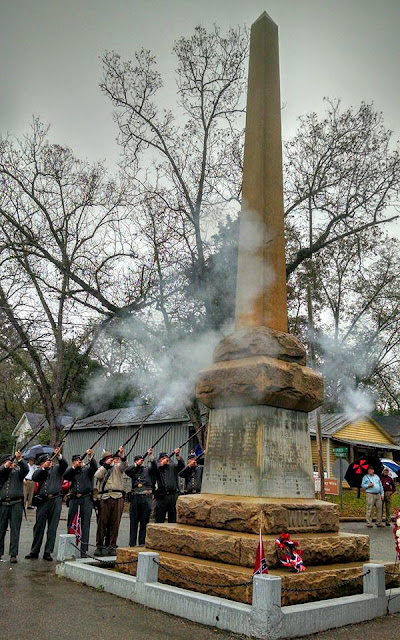 On November 1st, I had the privilege of attending the annual Capt. Henry Wirz Memorial Service in Andersonville, GA. This year marked the 150th Anniversary of the unconstitutional Military Tribunal, farce trial, and hanging of Capt. Henry Wirz based on perjury and lies. Americus Sumter County Georgia SCV Camp 78 has held an annual memorial service for Capt. Wirz each year beginning in 1974.

The new Cobra is similar to its predecessors in that it is a factory-built race car that is legal for NHRA Stock and Stuper Stock drag racing, as well as several classes in the IHRA, National Muscle Car Association, and National Mustang Racers Association.  It is also similar in that it is limited to 50 units, making the 2016 edition among the most collectible Mustangs ever.