Posted by Brock Townsend at Friday, March 24, 2017 2 comments: Links to this post


Last night we highlighted a Fox News story which suggested that Devin Nunes expected the NSA to deliver a "smoking gun" which would prove that the Obama administration spied on the Trump transition team, and possibly the president-elect himself, as early as today.

Moments ago, Nunes fanned that speculation by holding an impromptu press conference announcing that he'll call both FBI Director Comey and NSA Director Rogers before a closed session of the House Intelligence Committee to discuss topics which "they couldn't answer in a public setting."


More with videos @ Zero Hedge
Posted by Brock Townsend at Friday, March 24, 2017 No comments: Links to this post


This week’s edition of the Appalachian Messenger has articles by:

Francis W. Porretto
The “Are You Paranoid Enough?” Edition

Kit Perez
Wikileaks Just Proved Us Right, But What Now?

"Direct Primary Care” - As the healthcare battle continues, doctors are taking matters into their own hands

Via comment Badger on Trump Ultimatum: Vote on Health Care Friday or Oba...

The GOP’s battle with the Obamacare repeal act has been an up and down struggle between not just Democrats, but itself.

However, many doctors have taken to operating outside of the bounds of control from both the government, and insurance companies. It’s called “direct primary care,” and it allows doctors to establish clinics that run solely on the loyalty of their patients.

The way these clinics work is that a doctor – or group of doctors – will create a clinic that focuses on primary care, and charges its customers a monthly fee that covers all of the basic medical necessities.

This allows doctors to charge far less for not just tests and checkups, but medications as well. The best part? No insurance is required. A $50 monthly fee is all it takes.

“Where did Comey get the idea to investigate the Trump campaign?” —George Neumayr, American Spectator

In testimony best described as a series of obfuscations, FBI Director James Comey never directly answered that essential question. But he confirmed to the House Select Intelligence Committee that his agency has been investigating Russian interference in the election since last July, including “the nature of any links between individuals associated with the Trump campaign and the Russian government, and whether there was any coordination between the campaign and Russia’s efforts,” Wired reported.

What kind of interference? “Testifying before the House Intelligence Committee Monday morning, NSA Director Admiral Michael Rogers and FBI Director James Comey stated unequivocally that there was no evidence the Russians manipulated election machines to rig the vote,” stated the Conservative Review.

Yet if the vote itself wasn’t rigged, then what — exactly — does such “coordination” consist of? If it amounts to some sort of quid pro quo, why didn’t former President Obama’s open-mic promise to former Russian President Dmitri Medvedev he would “have more flexibility” following his re-election merit similar inquiries?

Secretary of State Rex Tillerson ordered U.S. embassies around the world to screen social media of any visa applicant to the U.S. who has ever spent time in territory controlled by the Islamic State, Reuters reports.

Social media is rarely screened by U.S. consular officials when considering visas, and could lengthen the processing time in Middle Eastern embassies. Tillerson’s social media guidance was accompanied by another to order to form working groups to “develop a list of criteria identifying sets of post applicant populations warranting increased scrutiny.”


More @ The Daily Caller
Posted by Brock Townsend at Friday, March 24, 2017 No comments: Links to this post

Spicer: More Evidence Of CNN Collusion With Hillary Than Trump With Kremlin

Posted by Brock Townsend at Friday, March 24, 2017 No comments: Links to this post 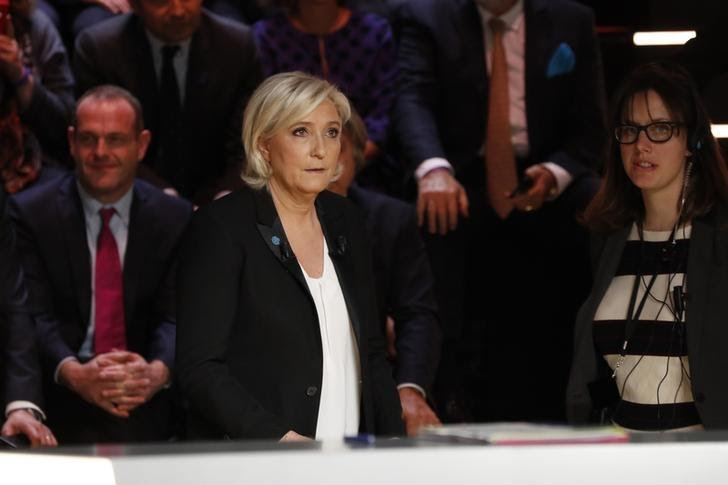 Far-right leader Marine Le Pen on Thursday said the lone-wolf attack outside parliament in London underscored the need for tighter border controls, as France shuddered at an incident that reopened wounds inflicted by similar assaults at home.

Security is a major campaign issue ahead of next month's close-fought presidential election, in which Le Pen is seen reaching the second round on a nationalist, anti-immigration platform.

Wednesday's attack has dominated French news coverage and served as a poignant reminder of militant attacks on French soil that have killed more 230 people since the start of 2015.

"The problem we have nowadays is this form of low-cost terrorism," the National Front leader told BFM TV and RMC radio, adding "we must control our borders".

Posted by Brock Townsend at Friday, March 24, 2017 No comments: Links to this post

Posted by Brock Townsend at Friday, March 24, 2017 4 comments: Links to this post


Republican congressional investigators expect a potential “smoking gun” establishing that the Obama administration spied on the Trump transition team, and possibly the president-elect himself, will be produced to the House Intelligence Committee this week, a source told Fox News.

Classified intelligence showing incidental collection of Trump team communications, purportedly seen by committee Chairman Devin Nunes, R-Calif., and described by him in vague terms at a bombshell Wednesday afternoon news conference, came from multiple sources, Capitol Hill sources told Fox News. The intelligence corroborated information about surveillance of the Trump team that was known to Nunes, sources said, even before President Trump accused his predecessor of having wiretappedhim in a series of now-infamous tweets posted on March 4.

The intelligence is said to leave no doubt the Obama administration, in its closing days, was using the cover of legitimate surveillance on foreign targets to spy on President-elect Trump, according to sources.

Nunes: 'I had a duty and obligation' to tell Trump

House Intelligence Chairman Devin Nunes on Thursday defended his telling President Trump about new surveillance findings of Trump campaign members. He said he was only acting on an "obligation" to the commander in chief.

"I would be concerned if I was the president and that's why I wanted him to know and I felt like I had a duty and obligation to tell him because as you know, he's taking a lot of heat in the news media and I think to some degree there are some things he should look at to see whether in fact, he thinks the collection was proper or not," Nunes told Fox News host Sean Hannity in a pre-taped interview set to air late Thursday.

Posted by Brock Townsend at Friday, March 24, 2017 2 comments: Links to this post

Trump should go blameless under this scenario while those opposed & Obamacare will not.

Office of Management and Budget director Mick Mulvaney made clear Thursday evening that President Donald Trump is done negotiating on the hotly-debated health care bill and wants a vote on Friday.

And, if the president doesn't get a vote to repeal and replace Obamacare, he will move on to other priorities, Mulvaney said according to a source in the room during the tense talks with GOP members. A senior administration source confirms to NBC News the "very definitive, very clarifying" message from the president and the administration's intention to move on — should the health care bill fail to move forward — to other matters such as tax reform, trade and border security.

The same day House Intelligence Committee chairman Devin Nunes gave a press conference disclosing that President Trump had been under "incidental surveillance," Attorney and FreedomWatch Chairman, Larry Klayman, sent a letter to the House Committee on Intelligence imploring them to pursue the claims and evidence presented under oath at a Washington DC FBI Field Office by his client - CIA / NSA Whistleblower Dennis Montgomery - who Klayman claims "holds the keys to disproving the false claims...   ...that there is no evidence that the president and his men were wiretapped"

When Montgomery attempted to deliver this information through the appropriate channels two years ago, the former CIA and NSA contractor wasn't given the time of day:


[W]hen Montgomery came forward as a whistleblower to congressional intelligence committees and various other congressmen and senators, including Senator Charles Grassley, Chairman of the Senate Judiciary Committee, who, like Comey, once had a reputation for integrity, he was “blown off;” no one wanted to even hear what he had to say.


As a result, Montgomery went to attorney and FreedomWatch founder Larry Klayman - who then approached the FBI:


Under grants of immunity, which I obtained through Assistant U.S. Attorney Deborah Curtis, Montgomery produced the hard drives and later was interviewed under oath in a secure room at the FBI Field Office in the District of Columbia. There he laid out how persons like then-businessman Donald Trump were illegally spied upon by Clapper, Brennan, and the spy agencies of the Obama administration.

Montgomery left the NSA and CIA with 47 hard drives and over 600 million pages of information, much of which is classified, and sought to come forward legally as a whistleblower to appropriate government entities, including congressional intelligence committees, to expose that the spy agencies were engaged for years in systematic illegal surveillance on prominent Americans, including the chief justice of the Supreme Court, other justices, 156 judges, prominent businessmen such as Donald Trump, and even yours truly. Working side by side with Obama's former Director of National Intelligence (DIA), James Clapper, and Obama's former Director of the CIA, John Brennan, Montgomery witnessed “up close and personal” this “Orwellian Big Brother” intrusion on privacy, likely for potential coercion, blackmail or other nefarious purposes.

He even claimed that these spy agencies had manipulated voting in Florida during the 2008 presidential election, which illegal tampering resulted in helping Obama to win the White House.


More @ Zero Hedge
Posted by Brock Townsend at Friday, March 24, 2017 No comments: Links to this post

Another Fed Court Rules that Exercising 2A Could Diminish Other Rights

A panel of the Eleventh Circuit Court of Appeals ruled last Thursday that a police officer will not face civil penalties for shooting and killing an innocent man because he was holding a handgun when the officer knocked on his door.

In other words, possessing a handgun in your own home could subject you to police actions that would not otherwise be permissible under the Fourth Amendment.


More @ Guns America
Posted by Brock Townsend at Friday, March 24, 2017 No comments: Links to this post

The Rock Island Auction Company, or RIA, is showcasing two amazing one-of-a-kind revolvers, a Smith & Wesson Model 19-2 and a Colt Python commissioned by none other than music legend Elvis Presley.

And while factory models of these guns still stand out today, these two are truly unique. Both have an amazing 95 percent custom engraving by Friedrick Wilhelm Heym Co. of Germany, consigned by the King himself.

“It is with this immense significance that Rock Island Auction Company is proud to present Elvis’ revolvers and other significant pieces of memorabilia,” states the announcement. The handguns will be showcased in their May 2017 Premiere Firearms Auction.


More @ Guns America
Posted by Brock Townsend at Friday, March 24, 2017 No comments: Links to this post