Muslim Sees Young Girl, And In Cold Blood Fires A Bullet Into Her Heart


A young ten year old Christian girl named Jessi just got out of Vacation Bible School in Egypt when a Muslim approached her and, without any affection or compassion, shot her in the heart and killed her. It was absolutely blood chilling when her parents received the news.
Her mother, Zakrya, recounted the devastating experience:


My friend was screaming on the phone, ‘Jessi has been shot! Jessi has been shot’! …The day was Aug. 6, around 7:15 in the evening. Jessi had just walked out of church having finished nine days of a 10-day Vacation Bible School. She had walked down this very street, came to this spot that I’m standing at and then one single shot to the heart ended her life.

About five years ago now there was a big flap over Abu Ghraib, an Iraqi prison where American soldiers practiced various forms of torture, both emotional and physical, on various Iraqi prisoners. It was all a part of George Bush’s “experiment” in “democracy” in Iraq. Some people were shocked when they read about this. They wondered how Americans could do such things—after all, aren’t we the moral leadership of the world? Sorry to say we are not. With what we have elected to the presidency for the last four or five terms, how can we claim any kind of moral leadership anywhere? You’d be surprised, but I have had Christians to defend torturing terrorists to me. They seem to feel that because they are terrorists, or have been accused of being terrorists, that to torture them is okay.

My response to this is that, as Christians, if we engage in this sort of thing then we are no better than they are. I have a hard time believing that the Lord Jesus would endorse torture.

But is the concept of torture, secret police and military prisons something new in our day and age in America? Again, sorry to say it isn’t. Americans have been partaking of torture and the secret police syndrome, in one form or another at least since the advent of the Lincoln administration. Mr. Lincoln and his associated seem to have had a paranoid fear of disloyalty to the federal government (most dictators have this) to the point where thousands upon thousands of Northern civilians were arrested and hauled off to prisons on the basis of nothing more than vague suspicion or some grumpy neighbor’s hearsay accusation.

Legend of the Yankee Trader

Born of poor Dutch immigrants, Cornelius Vanderbilt rose from an untutored Staten Island ferry boy who could not spell correctly into a modern captain of industry – he had known no other school than that of the dock and “Possessed of a sharp wharf-rat’s tongue and a rough wit . . . [and] Wherever his keen eye detected a line that was making a large profit . . . he swooped down and drove it to the wall . . . Then when the opposition was driven out, he would raise his rates without pity, to the lasting misery of his clients.”  The war-party of Lincoln in 1861 hastened a massive transfer of power to these captains of industry and large-scale capitalism.
Bernhard Thuersam, Chairman
North Carolina War Between the States Sesquicentennial Commission
"Unsurpassed Valor, Courage and Devotion to Liberty"
www.ncwbts150.com
"The Official Website of the North Carolina WBTS Sesquicentennial"

Legend of the Yankee Trader

“In the 1850’s [one of the kings of the marketplace] was Daniel Drew, sometimes an associate, sometimes rival of [Cornelius] Vanderbilt . . . Timid and mistrustful, he always believed the worst of men and their business ventures. He said: “Never tell nobody what yer goin’ to do, till ye do it.” [As] Henry Clews relates, “no hardships or privations could deter him from the pursuit of money.”

[Drew] . . . became a character of renown, possessing a fortune of many millions, a model for a rising generation. His sayings were repeated everywhere and his more famous tricks were rehearsed by younger disciples.  According to Clews he cared not a fig what people thought of him, or what newspapers said.  “He holds the honest people of the world to be a pack of fools . . . .when he has been unusually lucky in his trade of fleecing other men, he settles accounts with his conscience by subscribing toward a new chapel or attending a prayer meeting.”

For Drew was devoutly religious . . . Had he not given the immense sum of $250,000 to found a Methodist theological seminary in New Jersey? But in truth, it turned out in the end that he had given only his note, which after many years, in the shifting fortunes of new times, was never to be honored . . .
The legend of the Yankee Trader . . . formed a significant part of the composite national portrait, in which the mellow features of [Benjamin] Franklin are prominent . . . He was Uncle Jonathan, or Jonathan Slick or Sam Slick, as Miss Constance Rourke describes him in her recent inquiries into American folklore.  He was long and lean and weather-beaten; never passive, he was “noticeably out in the world; it was a prime part of his character to be “a-doin.”

He pulled strings, he made shrewd and caustic comments; he ridiculed old values; “the persistent contrast with the British showed part of his intention.” And to the British especially he always appeared homely and “rapacious,” but never slow-witted. If you met him in a tavern and he drew you into trade, he soon quietly stripped you of everything you had.

In the South, superstitious colored folks and even white folks, according to tradition, locked their doors piously at the approach of the long, flapping peddler’s figure.

This ingenious Yankee, quick to adapt himself everywhere, easily extricating himself from situations, and by religion and training profoundly rational, his passions under control, his reason dominated by his natural inclinations, “plain and pawky,” overassertive, self-assured, moving everywhere, had left his mark upon the society and leavened it. But in the give and take of the frontier he was at home naturally; he easily bested all others.”

Have You Seen the New Time Magazine Cover?

are taking to Twitter to explain their frustration with the new Common Core standards, posting screenshots of incomprehensible Core-aligned worksheets and tests.
The unintentionally hilarious images were collected by Twitchy.


More @ The Daily Caller
Posted by Brock Townsend at Sunday, November 24, 2013 No comments: 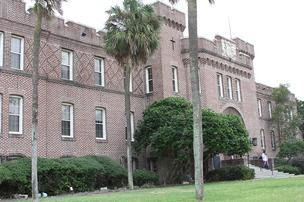 coalition of four Jacksonville art-based nonprofits want to turn The Armory Building at the northeast corner of State and Market Streets into a central arts hub for the city.

But they're not the only ones with plans for the building. The Sons of the Confederate Veterans, Kirby-Smith Camp 1209 — an organization of direct descendants of Confederate soldiers — wants to lease the empty historic building from the city for meetings, events and history exhibits.

City Council member Kimberly Daniels has introduced a bill to approve a license agreement between the Sons of the Confederate Veterans and the city. She plans to discuss it with Council President Bill Gulliford at 2:30 p.m. Tuesday.


It is resonating with people because it appears as an unexpected friendship and act of kindness towards a student who was eating alone.

But that's not exactly what happened.

It turns out that graduate student tight end Asa Watson has been friends with Will Spence, the student in a wheelchair, for quite some time. In reality, it is just a normal lunch for Watson and Spence, and freshman center Cole Blankenship.

In fact, the three said they were unaware anyone took their photo while they were eating, and they're still unsure of who it was.