Good day to everyone!

Via  The Feral Irishman

Good day to everyone! 😍😍

Posted by Brock Townsend at Wednesday, July 31, 2019 No comments:


Chinese government calls protests ‘creation of the U.S.’
Pompeo urged China to ‘do the right thing’ in handling unrest

The White House is monitoring what a senior administration official called a congregation of Chinese forces on Hong Kong’s border.

Weeks of unrest in the Chinese territory have begun to overwhelm Hong Kong’s police, who have found themselves in violent clashes with protesters. China warned Monday that the civil disorder had gone “far beyond” peaceful protest after police deployed tear gas over the weekend.

The nature of the Chinese buildup wasn’t clear; the official said that units of the Chinese military or armed police had gathered at the border with Hong Kong. The official briefed reporters on a range of issues on condition he not be identified.

Comment on, 91% of Democrats Expect Civil War if Trump is Reelected 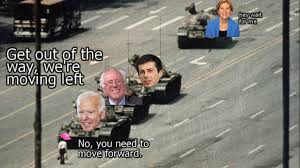 91% of Democrats Expect Civil War if Trump is Reelected

As much as it pains me to agree with the Party of Evil and their supporters, I take it as a foregone conclusion there WILL BE a Civil War in the near future. We are already in a cold cultural Civil War, it is only a question of when it goes hot. It will be ugly and gruesome. Think Rwanda times Bosnia on steroids. We are no longer a united nation with a common identity. We are now a gaggle of special interest groups each at opposition with every one else in what seen as a zero sum game. Identity politics and the cult of victimhood coupled with a sense of entitlement have destroyed any sense of a national identity.

What the Party of Evil and their supporters refuse to understand is that once the dogs of war are off the leash, it will spin out of control. Antifa and the Muslims live in their fantasy world of un-restrained violence against "fascists" and non-Muslims without consequences. Those who do not share their world view are making the stupid and fatal mistake in underestimating the Lefts and Muslims heart felt desire to commit genocide if given the opportunity to do so. Any sane person with an understanding of history will see why gun confiscation is a core plank for all the wannabes campaigning for POTUS. Yes they really do want us "Deplorables" dead. They will NEVER forgive us thwarting their efforts to rig the election of 2016 in the anointing of Hillary the Evil as the first woman (if I can call her that, but she sure as s--t is no lady). Democrats want and lust after a civil war. This will NOT end well. Winter is coming

91% of Democrats Expect Civil War if Trump is Reelected

Via John "This is precisely why The Founders gave us the 2nd Amendment; to be used at a time just like this; a time of great danger from enemies of our Republic, both foreign and domestic."