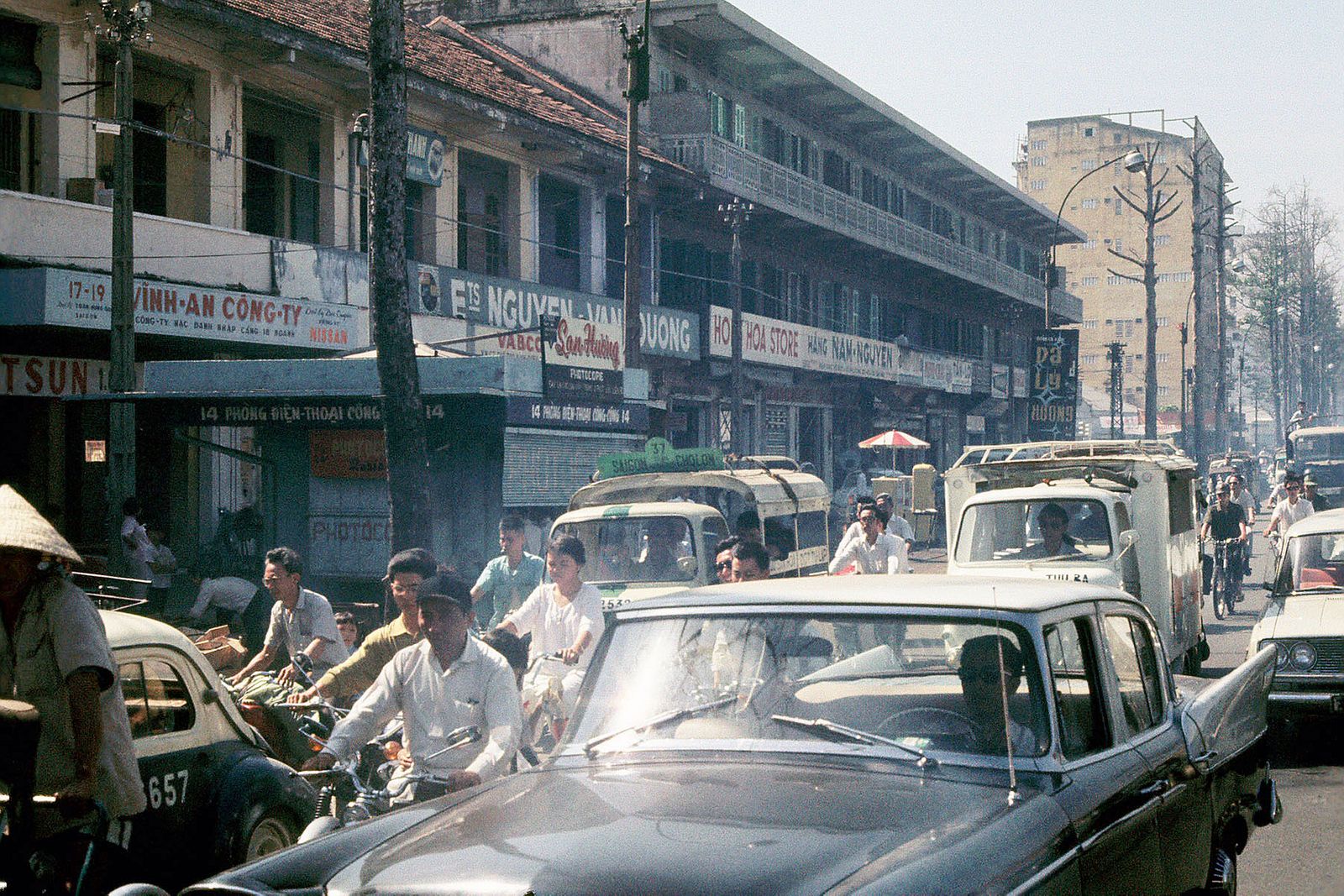 Free of international-style skyscrapers, Saigon’s urban quarters used to be all red roofs and modernist tube houses in the late 1960s.

In these few film photos, US Army veteran D. Hoag recorded a cool and chaotic Saigon when traffic jams were a city staple and residents rode around the city in áo dài and sunglasses. Hoag stayed on Tran Hung Dao Street, just a few blocks from Ben Thanh Market, and some shots piece together a panoramic look of the diminutive Saigon skyline.

I used one the last time I was there and took a picture I believe.

Sidewalk barbershops are a symbol of old Saigon. In the face of globalization and its demands for westernization, the sight of a simple chair placed beneath an awning where one can get an affordable trim just a few meters from a busy street is gradually vanishing.

As people seek modernity and newness, old traditions are being devalued and lost. Nothing exemplifies this trend more than the disappearance of barbers practicing their trade among a valued group that resembles friends as much as customers.


More with pictures @ Saigoneer
Posted by Brock Townsend at Thursday, August 01, 2019 No comments:

The United States is Not a Nation

Representing the academy were F.H. Buckley, Charles Kesler, Amy Wax, and Patrick Deneen. Other conservative writers and thinkers participated in panels. The two figures most associated with national conservatism — Yoram Hazony and R.R. Reno — spoke during the opening plenary.

What is this national conservatism all about?

Most readers will recall that I took note in the last article of a magazine published by a man named Ben Green, who published a periodical called “The People’s Weekly.

Historian Otto Eisenschiml noted that a copy of this publication, noting Edwin Stanton as among the proxy assassins of Lincoln, was found in a hollow space behind a mirror in an old building in Baltimore in 1948. In this particular issue, Green promised more juicy details in the next issue. And this is where it gets interesting.

For the first 42 years of his life, David Yamane never touched a gun. But the Wake Forest University professor is now among North Carolina’s concealed-carry permit holders, whose numbers have more than tripled since he first nervously pulled a trigger in 2010.

Yamane doesn’t just shoot guns — he studies them, too. As a sociology professor at Wake Forest, he researches gun culture and policy in today’s America.

ICE: Iraqi Refugee Used Wife, Children as Shields When Agents Showed Up To Arrest Him

The left frequently insists that refugees who make their way into the United States are good people who just need a chance at a better life. While that’s undoubtedly the case in some instances, a certain percentage of migrants will never become upstanding citizens — and one Iraqi refugee definitely seems to have fallen into that category.

Ali Al-Sadoon is a 34-year-old migrant from the Middle East. Like so many, he had a chance to make something of himself but instead became caught up in crime. According to The Detroit News, Al-Sadoon was arrested for breaking and entering in 2013, an offense that led to the Department of Homeland Security to seek to deport him.