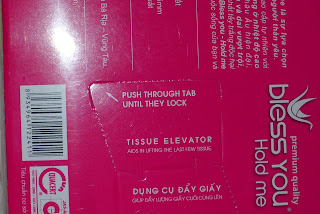 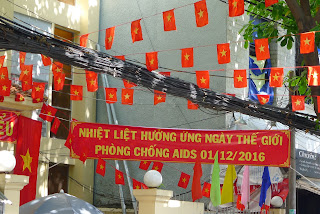 Before the Vietnamese referred to AIDS as SIDA, but evidently have changed their tune.  Seemed to be a one day work shop which upon completion students received a diploma to do what with I wouldn't know. 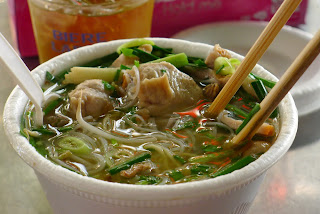 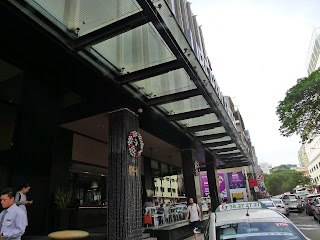 A/C being pumped towards the sidewalk.  I give up..... 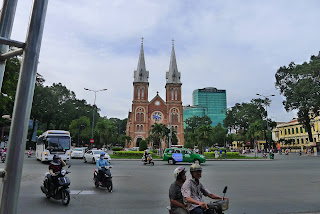 The area around the church used to be John F. Kennedy Square until the Communists took over. 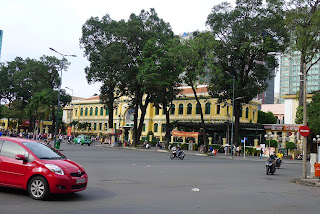 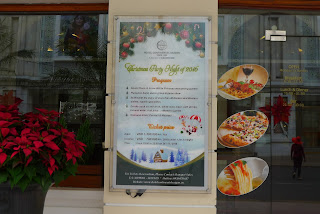 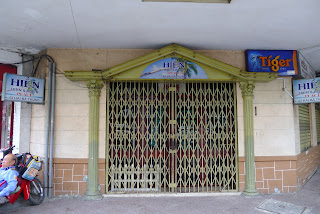 This was refreshing as the American and his Vietnamese wife opened it around 1992/3 and it is still in existence.  A typical 'Saigon Tea' bar. 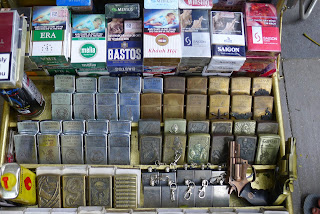 Some of these could be authentic. 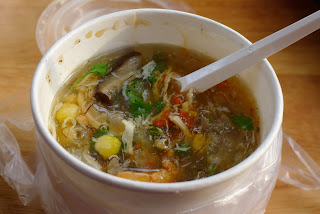 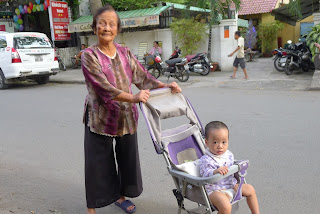 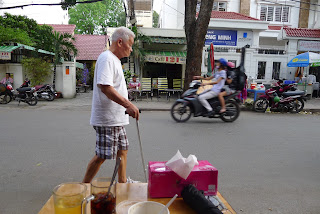 This gentlemen takes his daily exercise around four.  Reminds me of the Frenchman who did the same though within the compound of the house next to mine at 141 Tran Quy Cap,Saigon. 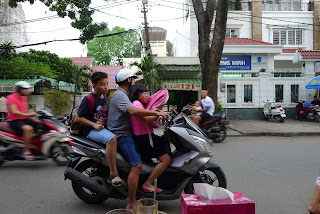 I've seen a family of seven on one before.  He's picking up his children after English lessons and/or babysitting. 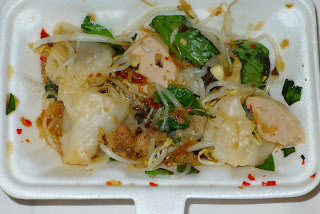 Bánh Cuốn or what's left of it.
Posted by Brock Townsend at Sunday, December 18, 2016 6 comments:

Striving to Maintain the Union

The departure of Southern States from the Union came as no surprise to many, and those like Alexander H. Stephens of Georgia forecast disunion to President James Buchanan if he would not end his warfare with Stephen Douglas. Noting the refusal of Republicans to compromise and not wanting to return to Congress to witness the death of the Union, Stephens returned Georgia to await the unfolding events.
Bernhard Thuersam, www.Circa1865.com   The Great American Political Divide

Striving to Maintain the Union

“The [Cincinnati] speech was intended as a solemn warning not only to his constituents and people of the South, but the whole country, that in his opinion the peace and prosperity of the country depended upon a strict and inflexible adherence to the principles of the adjustment measures of 1850 upon the subject of slavery, as carried out and expressed in the Democratic Baltimore platform of 1852, with the additional plank inserted in the Cincinnati Convention of 1856.

It was well known then that Mr. Stephens had serious apprehensions that those principles would be departed from in the next Democratic Convention to be held in Charleston the following year. It was also known that he did not finally determine to withdraw from Congress until after a personal interview with Mr. [James] Buchanan, in which he had urged the President to cease his warfare against Mr. [Stephen] Douglas, and the support of the paper known as his organ in Washington in insisting upon the insertion of a new plank in the next Convention, asserting it to be the duty of Congress to pass acts to protect slavery in the Territories, and not to leave that subject, as the Cincinnati platform had done, with the people of the Territories.

Mr. Stephens most urgently urged the President that if he continued to pursue the line of policy he was then following there would be a burst-up at Charleston, and with that burst-up of the Union – temporary or permanent – “as certainly as he would break his neck if he sprang from that window” [of the reception-room at the White house, in which they were conversing] “or as the sun would set that night.”

Mr. Buchanan seemed surprised at this opinion, but was unshaken in his determination to adhere to the policy he was then following. Mr. Stephens, in taking leave, told the President that his object in seeking the interview was to know if his purpose was as stated, and if that was so, his own intention was, not to be allowed to return to the next Congress.

He had spent sixteen years of life in striving to maintain the Union upon the principles of the Constitution; this he thought could be done for many years to come upon the principles set forth in the Cincinnati platform. The Government administered on these principles he thought the best in the world; but if it was departed from, he saw nothing but ruin ahead. He did not wish to be in at the death; but if disunion should come in consequence of this departure, he should go with the people of his own State.

Another fact connected with the retirement of Mr. Stephens from Congress may be noted here. When leaving Washington, with a number of other Southern members, on the beautiful morning of the 5th of March, 1859, he stood at the stern of the boat for some minutes, gazing back at the Capitol, when someone jocularly said, “I suppose you are thinking of coming back to those halls as a Senator.” (It was known that he had announced his intention not to return as a Representative.)

Mr. Stephens replied, with some emotion, “No; I never expect to see Washington again, unless I am brought here as a prisoner of war.” This was literally fulfilled in the latter part of October 1865, when he passed through Washington on his way to his home as a paroled prisoner from Fort Warren.” 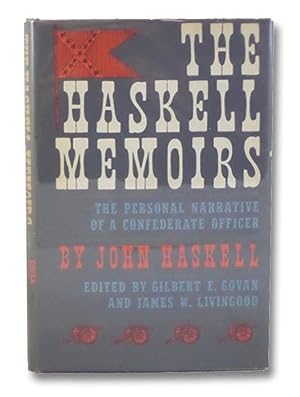 Viscount Garnet Wolseley wrote in his “English View of the American Civil War” that when he was with Lee’s army at Winchester, Virginia in the autumn of 1862 that “the soldiers in every camp laughingly spoke of General John] Pope as “Stonewall Jackson’s Commissary,” so entirely had Jackson in the “Pope Campaign” depended upon capturing from that General everything he required for his men” (page 139)
Bernhard Thuersam, www.Circa1865.com

“The battle of Gettysburg will, no doubt, rank as the turning point of the war though perhaps it may better be called the breaking point of the South’s resources. For months our men had been on rations such as no troops ever campaigned on and did a tithe of the work ours were called on to do.

Corn meal and damaged bacon were the staples, often so damaged that to live on them inured disease. Medicines, chloroform especially, had got so scarce that small operations as painful as great ones were done without it. Much of that which was used was of such bad quality that it was used as only a choice of evils.

Delicacies for the sick were unheard of. They lived on damaged bacon or lean beef or went hungry. Clothes and shoes were scant and insufficient, except for those which were taken from our friends, the enemy. Overcoats would have been almost unknown but for them, though for that matter we would have fared badly for everything but for their contributions.

Certainly half our muskets and two-thirds our artillery were forced contributions from them, while [General N. P.] Banks, who commanded United States troops in the [Shenandoah] Valley in 1862, was better known as and better deserved the title of [Stonewall] Jackson’s commissary than as commander of his troops.

The state of affairs would appear to give compelling reasons for the much-criticized advance into Pennsylvania. With our railroad lines worn out, our ports blockaded, and the field of operations stripped by both armies, and burned and desolated by the enemy, who at last openly declared that their policy would be, as Sheridan later boasted, to leave the country so that a crow flying over it would have to carry his rations, the capture of arms, clothing, medicine, and even food, which earlier had added to our comfort, now came to be a necessity.

It looked easier to go to the enemy’s homes to get it, and to leave our poor people a chance to rest and to gather together the fragments left them.” 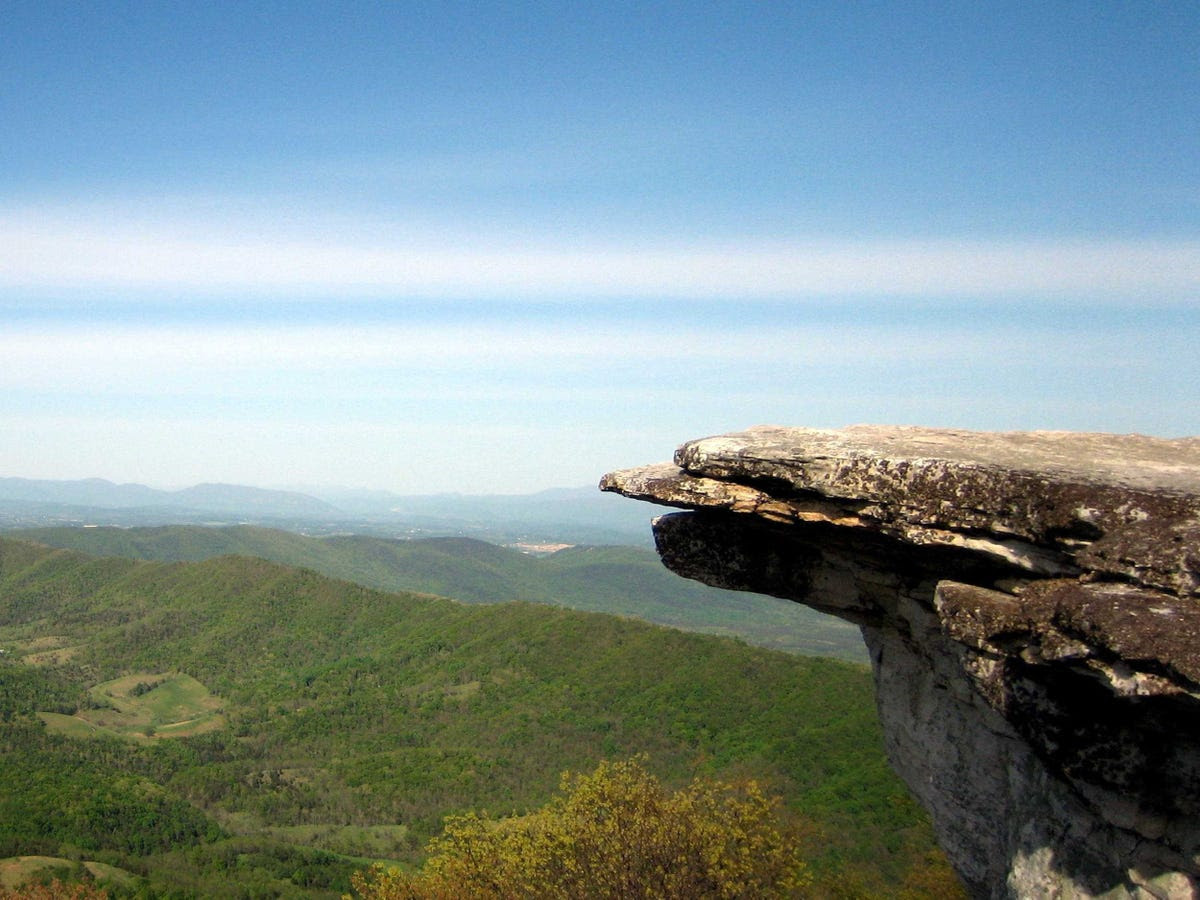 Philip Freneau
Rules for Changing a Limited Republican Government into an Unlimited Hereditary One. 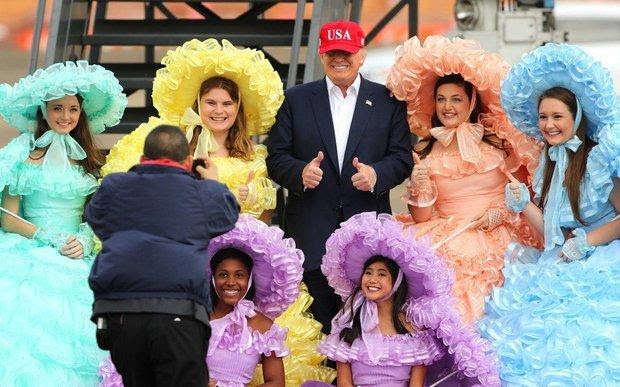 Mobile's unofficial ambassadors, the Azalea Trail Maids, welcomed President-Elect Donald Trump when his plane landed at the Brookley Aeroplex on Saturday afternoon on the final stop of his "thank you tour" at Ladd-Peebles Stadium in Mobile.

When AP national political reporter Jonathan Lemire tweeted a photo of "the president-elect's welcoming committee," hundreds of responses ranged from "disgusting" to "beautiful."

1. We are pleased to announce a new venue, the National Press Club! We'd like to thank the Press Club for accommodating our group of citizen Trump supporters, who come from all backgrounds, ethnicities, and walks of life. They realize we simply want to celebrate the Inauguration. They have been wonderful to work with so far.

2. This event will now be OPEN BAR. As part of our deal with the Press Club, we decided it would be easier for everyone involved to move to an open bar instead of dealing with drink tickets and a cash bar. So, OPEN BAR!

3. The Press Club offers a larger space which means we can release MORE TICKETS. We will release 250 additional tickets for sale at $99 each on Monday at noon ET. Grab them while you can, they will go fast!


More @ The Deplora Ball
Posted by Brock Townsend at Sunday, December 18, 2016 No comments:

DNC : Its`s the Russians Fault for Exposing Our Corruption

A former police officer fired for flying the Confederate flag at her suburban Atlanta home has filed a federal lawsuit saying her termination violates her constitutional right to free speech.


Silvia Cotriss had worked for the Roswell Police Department for about 20 years and was a sergeant when she was fired in July. The lawsuit was filed Wednesday against the city of Roswell, the police chief and the city administrator.

"This sort of high handed politically correct firing by the City of Roswell sets a horrible precedent and endangers the employment and constitutional rights of government employers across the State of Georgia," David Ates, an attorney for Cotriss, said in an emailed statement. 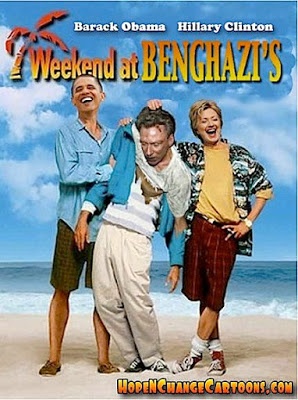 Kim Jong-un of North Korea was listed above Obama at number 43.

More @ The Gateway Pundit
Posted by Brock Townsend at Sunday, December 18, 2016 No comments: