VIOLENT POLITICS: AN EXCERPT, WITH COMMENTARY

The following excerpt is from a 2007 book titled “Violent Politics: A History of Insurgency, Terrorism, And Guerrilla Warfare From the American Revolution to Iraq” by William R. Polk, published by HarperCollins.
I've included the excerpt because, as I read it, it occurred to me how amazingly relevant his conclusions are to the current topic of discussion, specifically, the first phases of the organization of a resistance movement. I highly recommend the book so far (I'm not done with it yet). I find it useful to refer readers to other source besides myself, who are able to verify (and sometimes disprove) my conceptual framework I present. Please note that my comments are highlighted, and italicized in bold font. Any highlighted and underlined original text emphasized is my doing.
“Each of the with which I deal—and others that are too numerous to be fully recounted here—begins with almost ludicrously tiny groups of disaffected people who sally forth against vastly superior armies and police forces. The odds appear impossible—even absurd. Consider the record:

Training Session Six: Failure-to-Stop Drills and Weapon Transitions
Whether the enemy is equipped with ballistic protection in the form of body armor, is jacked up on some form of chemical stimulant, or just happens to be tougher than the fighter's ammunition is deadly, there are numerous reasons that even a properly delivered round of high-velocity ammunition may not put him down. For this reason, it is imperative that the shooter develop a consistent, trained plan for continuing to engage the enemy until the enemy is no longer a threat.
Traditionally, the method technique taught for this was the “Mozambique” drill (Named by LTC Cooper, for a former student who used it during the unpleasantness in that country a couple decades ago. For you young guys, go Google it. --J.M.). The idea behind the Mozambique drill is that, if two to the chest did not kill the bad guy, more may not work either, so shut him down in a hurry with a shot to the head. Unfortunately, even a person who just took two in the chest may still be moving his head erratically enough to prevent a solid hit to the brain box (While I do advocate practicing and mastering head shots with the pistol at near-contact ranges inside of 15 feet or so, to counter the body armor threat, I have my doubts as to its realistic application any further away than that. --J.M.).

Walter McKenzie Clark was born at Prospect Hill, the family home of his mother Anna Maria Thorne Clark, on 19 August 1846. Walter grew up at his father’s nearby Ventosa Plantation, and at age eight attended school at Vine Hill Academy near Clarksville. In the fall of 1859 Walter was placed under the tutelage of Professor Graves at the Belmont Select School in Granville County; the following September his father enrolled Walter as a cadet in Tew’s Military Academy at Hillsboro, a school modeled after the South Carolina Military Academy Colonel Charles C. Tew had earlier graduated from in 1846.

After the withdrawal of North Carolina from the United States in May, 1861, Governor John W. Ellis requested that Colonel Tew assign one of his cadets to act as drill master for the first contingent of raw troops then assembling – Colonel Tew and his staff designated young Walter Clark for the undertaking.

Upon the organization of the 22nd North Carolina Regiment, “Little Clark” was elected lieutenant and drillmaster and marched with his men to Virginia. In November 1861 he was back in Raleigh as drillmaster of the 35th North Carolina at Camp Mangum, then in the spring of 1862 returned to his studies at Tew’s Military Academy.

In the summer of 1862 the 35th North Carolina reorganized with Matt Ransom elected colonel, and sixteen year-old Walter Clark elected first lieutenant. After a march to Richmond and then Harper’s Ferry with Stonewall Jackson, the 35th Regiment was involved in the desperate fighting at Sharpsburg in September where the Southern forces were outnumbered 90,000 to 35,000. Clark’s unit fought at Fredericksburg where he suffered a hand wound, and with the 35th Regiment greatly reduced due to dead and wounded, Clark withdrew his men to Kenansville, North Carolina to recruit and refit in February of 1863.

In the spring of 1863 he entered the University of North Carolina, graduating with first honors of his class on 2 June 1864. Then assigned to the Fifth Battalion Junior Reserves, he was elected major; on 4 July a unit reorganization appointed Walter lieutenant-colonel under Colonel Charles W. Broadfoot. At seventeen, he was no doubt the youngest of that rank in either army, but another reorganization returned him to the rank of major.

Clark’s Junior Reserves were utilized for the protection of North Carolina’s agricultural interior and railroad which supplied Lee’s army, and fought off raids of the enemy originating in occupied New Bern. Clark found himself in command of the center skirmish line of General Robert F. Hoke’s North Carolinians near Bentonville on 20 March 1865 -- a total of fifteen thousand against the enemy’s seventy thousand men. The enemy made several assaults on the small Southern force, and were beaten back each time with heavy loss. During the battle Major Clark repeatedly mounted the breastworks and cheered his gallant men on until his entire left flank had been turned by sheer weight of numbers, and General Hoke commanded his retreat from danger.

After the capitulation of General Joe Johnston in April 1865, Major Clark and faithful slave companion Neverson rode the 150 miles to Ventosa, passing through Hillsboro and the military academy he had attended four years before – Colonel Tew had been killed at Sharpsburg while leading the 2nd North Carolina Regiment. When he reached home, he found nothing – marauding Northern forces had burned Ventosa to the ground, the once-great cultivated fields of cotton and corn were now a wilderness of weeds. The slaves were wandering aimlessly through the neighborhood, and raiding enemy soldiers had stolen all the livestock. All the happy memories of Walter’s childhood here lay waste in ashes before his eyes.

Practicing law after the war, Governor Alfred M. Scales appointed Clark a judge of the Superior Court in April 1885; in 1889 Governor Daniel G. Fowle appoint him to the State Supreme Court. He was elected to the Supreme Court in 1890 and 1894, and was elected Chief Justice in 1902. “On Saturday afternoon, May 18, 1924, Clark finished writing the last opinions

of the Court which had been assigned him, and filed them neatly in his desk. Sunday morning he dressed as usual for church, but as the bells were ringing for the service a weariness

came over him and he lay down on his couch. The next morning about two o’clock a message was flashed to the press of the nation that Walter Clark Chief Justice of the Supreme Court of North Carolina, was dead.” 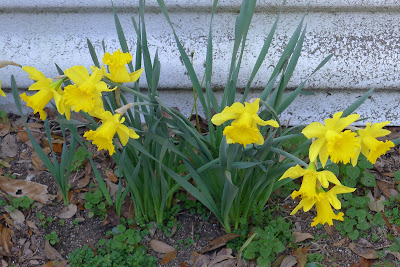 We had a large, circular driveway in Marshall, Virginia which was encompassed by Daffodils in the springtime. A beautiful sight to behold.

I WANDER'D lonely as a cloud

That floats on high o'er vales and hills,

When all at once I saw a crowd,

A host, of golden daffodils;

Beside the lake, beneath the trees,

Fluttering and dancing in the breeze.

Continuous as the stars that shine

And twinkle on the Milky Way,

They stretch'd in never-ending line

Along the margin of a bay:

Ten thousand saw I at a glance,

Tossing their heads in sprightly dance.

The waves beside them danced; but they

Out-did the sparkling waves in glee:

A poet could not but be gay,

In such a jocund company:

I gazed -- and gazed -- but little thought

What wealth the show to me had brought:

For oft, when on my couch I lie

In vacant or in pensive mood,

They flash upon that inward eye

Which is the bliss of solitude;

And then my heart with pleasure fills,

And dances with the daffodils.