More @ the hilariously named Department of Justice! :) [Should be in MAD magazine]
Posted by Brock Townsend at Friday, October 16, 2015 No comments:

A Virginia man says he would rather go to jail than give up his specialty Confederate flag, according to news reports.

"I have a great-great-great grandfather who fought and died with the 5th Georgia Infantry. And his four brothers all died with him in the name of that flag," Kevin Collier told WVEC. "I will go to jail before I change those tags."

Virginia is requiring owners of Confederate-flag plates to obtain new ones without that symbol, The Christian Science Monitor reported.

The DMV sent 1,600 new plates to those with the Confederate plates, but only 187 have returned the old plates, WAVY TV reports. Some who didn't want the new ones sent them back, writing "no thank you," the department said. Gee, just working out swell...........:)

Just two weeks after it announced a plan to globalize local police departments through the “Strong Cities Network,” the Obama administration has added a new tool in its fight against “violent extremism.”

A new position within the Justice Department – yet to be filled – will focus on investigating lone-wolf domestic terrorists or “extremists.”

The person who heads this new effort will target extremists who plan mass shootings, hold racist, bigoted or anti-government views or see themselves as “sovereign citizens.”

The new position at the Justice Department, dubbed the “domestic terrorism counsel,” will serve as the main point of contact for U.S. attorney offices nationwide and will identify trends across cases, help shape strategy and “analyze legal gaps that need to be closed,” said Assistant Attorney General John Carlin.

It is not clear what Carlin meant by that statement. 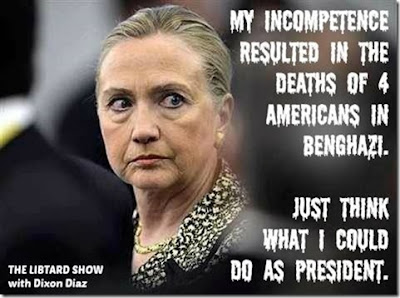 Hillary in 2008 - I disagree with Sen. Obama’s assertion that people in our country cling to guns and have certain attitudes about trade and immigration simply out of frustration. You know, my dad took me out behind the cottage that my grandfather built on a little lake called Lake Winola outside of Scranton and taught me how to shoot when I was a little girl. Some people now continue to teach their children and their grandchildren. It’s part of culture. It’s part of a way of life. People enjoy hunting and shooting because it’s an important part of who they are. Not because they are bitter.

On Monday, the Pentagon proudly announced that it had “successfully” delivered 50 tons (yes, tons) of ammo to rebels fighting the Assad regime in Syria.

Before going any further, it’s important to note that the move to publicly deliver ammunition to the groups fighting the Russians set off alarm bells even among the most mainstream of media with CNN running the following headline as though the notion that the conflict is just another proxy war were somehow “news”: “Syria's 'proxy war' rages in towns near Aleppo, Syria.”

So “all” it took was for Russia to invade and for the US to brag about handing “tons” of ammo to the very groups Moscow is fighting for the clueless public to come to the shocking realization that Washington is effectively at war with Moscow in Syria.

Obviously that’s not news, as it’s been clear to anyone who knows anything about geopolitics for years, but what is news is the extent to which the ammo paradrops mark a new low point for Washington in terms of countering Assad. As we put it on Monday:


The family of an unarmed teenager shot dead by a sheriff's deputy during a Michigan traffic stop in February has filed a federal wrongful death lawsuit alleging that the officer's "entire course of action was illegal."

The lawsuit, filed Wednesday against Eaton County Sheriff's Sgt. Jonathan Frost and the county, says the officer was driving a new patrol car on Feb. 28 that had "improperly bright or misaimed headlights, even on low beams." Deven Guilford, 17, who had been driving to his girlfriend's house after playing basketball at his church, was one of three drivers to flash their brights at the officer to get him to dim his lights, the suit says. Frost stopped all three drivers.

Five minutes after Guilford was pulled over, the lawsuit says, the teen lay dead in the snow on the side of the road, struck by seven bullets. The county prosecutor said the teen fought with the deputy and was killed in "justifiable self-defense."

German Chancellor Angela Merkel is coming under severe pressure over her 'open door' policy on refugees and migrants as her Interior Minister Thomas de Maiziere joined calls for a cap on the number coming into the country.

Merkel has been criticized in Germany and outside for encouraging the mass migration which has led to millions moving within Europe and the closure of borders, challenging one of the fundamental principles of the European Union — the freedom of movement.


‘Mein Kampf’ to Be Sold in Germany