The Obama administration continue their dirty political tricks and we are more than happy to expose them. Today, DC Police were ordered to remove tourists and Vietnam War veterans who were visiting the Vietnam Veterans Memorial Wall on Friday.

After one group of veterans went around the barricade, "the park ranger told them the wall was closed, "NBC's Mark Seagraves reported. "Later another group of vets showed up and moved the barricades. At that point, the memorial filled with vets and tourists. That's when police came and moved everyone out."

The Vietnam Veterans Memorial Wall is a black granite outdoor wall on which the names of the 58,272 service members who died or were unaccounted for during the Vietnam war are inscribed.

It takes more manpower and costs the government more money to close down an outdoor wall than to let people walk past it and pay their respects.

5 NYPD Cops Were Involved with Bikers Who Attacked SUV

A bizarre story just took a turn for the worse. Earlier in the week Freedom Outpost reported on a group of angry bikers who taunted and attacked a family in a SUV in New York. Dr. Eowyn also detailed the horror of Alexian Lien and his family as a large group of black bikers harassed and attacked them. Here is a snippet:

Priests face arrest for celebrating Mass in defiance of shutdown

World War II Veterans denied access to their memorial is appalling. But, Catholic priests denied the opportunity to celebrate Mass, even as volunteers, leaves me speechless. Read below from the general counsel of the Archdiocese for Military Services as he explains priests that defy the governments orders may even face arrest.


"If the government shutdown continues through the weekend, there will be no Catholic priest to celebrate Mass this Sunday in the chapels at some U.S. military installations where non-active-duty priests serve as government contractors."

"Military personnel enjoy, like all Americans, the First Amendment guarantee of the 'Free Exercise' of their particular religious faith. But because military personnel are considered a 'captive audience,' the laws of our country require the government to provide access to that faith. This is why we have military chaplaincy. This all becomes very clear when on thinks of a military family stationed in Bahrain or Japan. They cannot walk down the street to the local synagogue, church, mosque, etc."

Putting America at Risk: Border Patrol Told to ‘Stand Down’ Amidst Government Shutdown

Our radical president, Barack Obama, has been at-odds with the American people since he arrived in the Oval Office. Though he has promised to work for the American people, Obama has continually worked against us. He left Americans to die in Benghazi. His IRS has been systematically targeting political dissenters in a campaign of harassment. He has helped to push catastrophic healthcare reforms that will cripple our economy, devastate healthcare options for millions of Americans and force millions to violate their principles- both religious and political.

A suburban New York newspaper has sued Putnam County to compel it to release its pistol permit records.
The Journal News says it sued Thursday after the county denied two Freedom of Information requests and a subsequent appeal.

Here’s a quick way to catch up on the week’s news, through some of our favorite photos.

The newspaper first requested information from Westchester, Rockland and Putnam counties following the Newtown, Conn., shooting massacre. It made another request after the state passed a gun control law allowing permit holders to apply to keep their names and addresses private.

Million Vet March on the Memorials 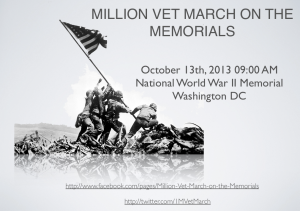