Mr. Dirck’s comparative analysis of Abraham Lincoln and Jefferson Davis promises much.  Friendly reviewers have found his work “intellectual history at its most stimulating,” or “psychologically sophisticated.”  Alas, I confess that I do not see it.  To be fair to Mr. Dirck, he is constrained by the usual orthodoxies and dogmas which currently reign in the academy.  Moreover, Mr. Dirck does attempt a fair analysis of both men, and he does give us useful parts of both Davis and Lincoln, moreso Davis, but we do not quite get the whole man in either case.  In Lincoln’s case, Mr. Dirck’s analysis leaves out the essence of the man’s self-conception.

Much of Mr. Dirck’s narrative plunges into the depths of psycho history.  Psychology is a slippery enough endeavor when one has the patient live and in person, and on the couch.  When the subjects are dead and the source record is incomplete, then one treads where angels fear to go.  For example, let us examine Mr. Dirck’s case for the presence of surrogate fathers in the life of both Mr. Davis and Mr. Lincoln.  Joseph Davis, the elder brother of Jefferson Davis, does present a plausible figure for surrogate father.  He takes an active interest in Jefferson Davis’s education, his professional career as a soldier, and later as a planter and politician, and in the formation of  Jefferson Davis’s character and intellect.  The case for Henry Clay and George Washington representing surrogate fathers for Lincoln is a bridge too far.  Granted, the idea fits neatly with Mr. Dirck’s Lincoln as the abstract and detached logician.  Nevertheless, describing Mr. Lincoln’s reaction to Stephen Douglas’s charge that Lincoln had betrayed the principles of Henry Clay as that of an indignant “natural descendant.” is a stretch.

Could not a more simple explanation be that Lincoln was merely stung by Mr. Douglas’s veiled charge of hypocrisy for Lincoln’s rejection of the Compromise of 1850?  A compromise that was, as Mr. Douglas pointed out, designed by one Henry Clay.  As they say in psychology, sometimes a cigar is just a cigar. 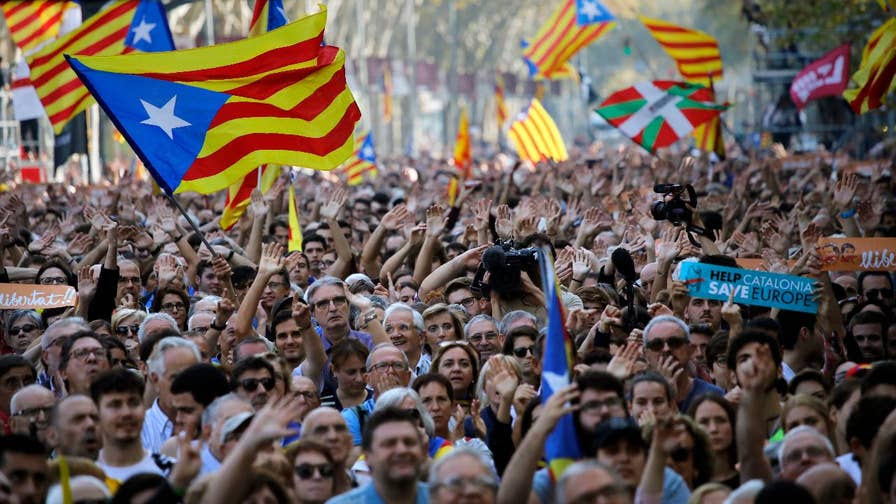 Catalonia’s ousted president has traveled to Brussels and been offered asylum, Spanish authorities said Monday soon after indicating that prosecutors were filing charges against him and other regional leaders related to their declaration of independence last week.

Spanish prosecutors in Madrid said they were asking judges for rebellion, sedition and embezzlement charges against Catalan leader Carles Puigdemont and others who were dismissed by Spain’s central government.

Puigdemont and a majority of Catalonia’s parliament declared independence Friday, but the Spanish government then fired them under a special constitutional provision and called new regional elections Dec. 21.

The attorney general, José Manuel Maza, did not order their immediate arrest, saying he wanted to urgently prosecute the 20 politicians and ordering them to appear in court in Madrid in coming days.

Some Goodies from Ol' Remus 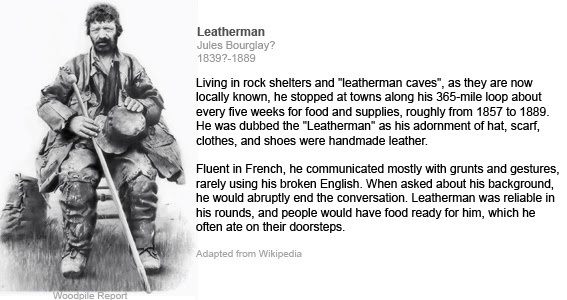 Time has already run out on conservatives. They had 37 years, the Presidency, the House, the Senate, nine Supreme Court nominations, and two economic booms with which to fight the cultural war. And they did absolutely nothing... The Alt-Right acts. The Alt-Right fights. The Alt-Right does not surrender. Because of that, the Alt-Right will be the only Right that survives to defeat the Left.

James Rawles at Survival Blog has a warning for preppers:

The P/E ratio of the Dow Jones stocks now stands above 31 to 1. There have only been two times since the early 1880s that U.S. stocks have been so grossly overbought: Just before 1929 stock market crash and just before the 2000 “dot.com” bubble implosion. Consider this an earnest stock market crash warning. 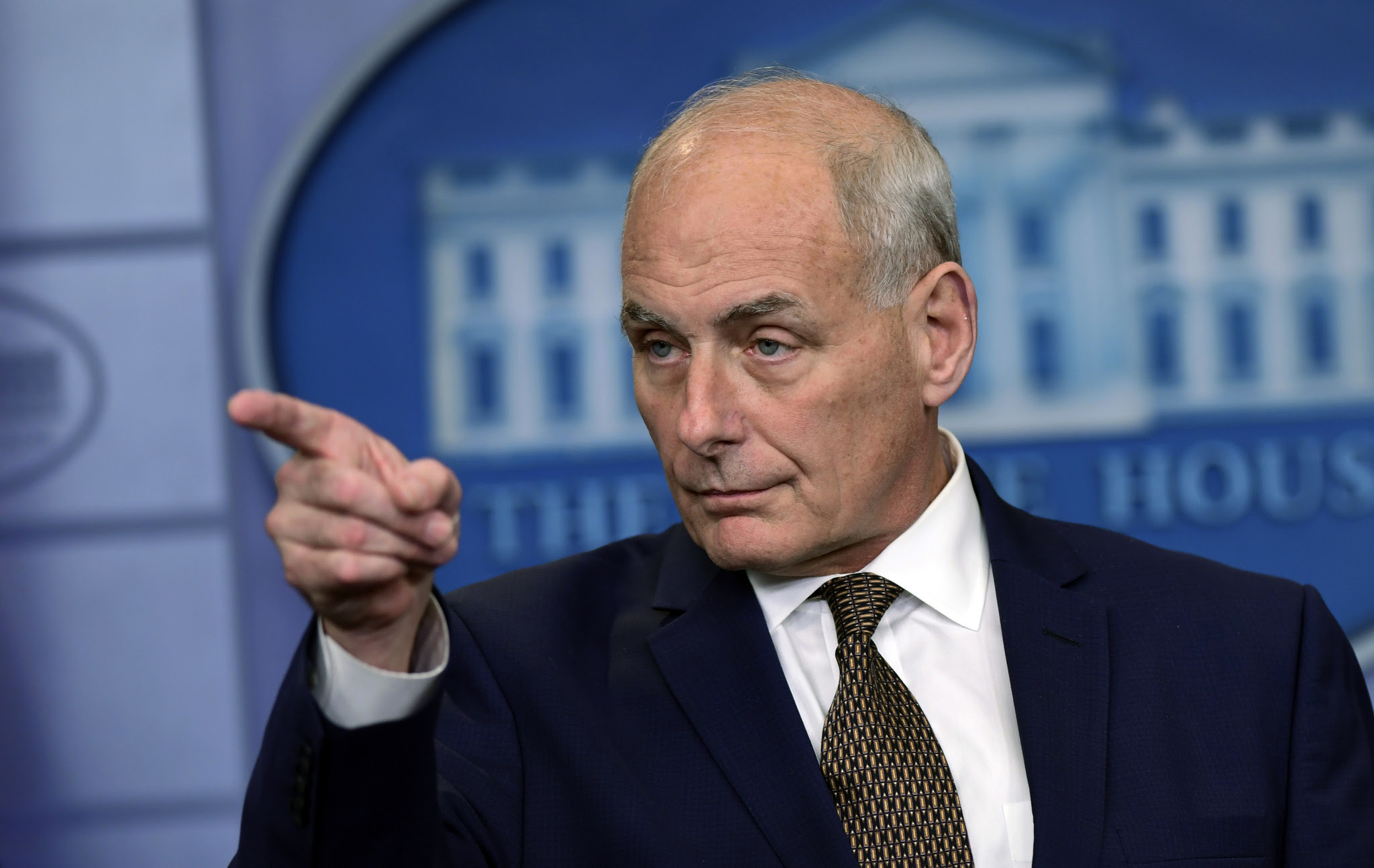 White House chief of staff John Kelly is coming under fire for comments made about the Civil War during an interview that aired Monday night, and some on the Left are accusing the retired Marine Corps general of being racist after he said the Civil War was caused by the “lack of an ability to compromise.”

Fox News host Laura Ingraham asked Kelly about efforts to take down Confederate monuments, and said there is a “lack of appreciation of history” today.

“I would tell you that Robert E. Lee was an honorable man. He was a man that gave up his country to fight for his state, which 150 years ago was more important than country. It was always loyalty to state first back in those days. Now it’s different today,” Kelly said. “But the lack of an ability to compromise led to the Civil War, and men and women of good faith on both sides made their stand where their conscience had them make their stand.”

I wrote in Climate Change: Why I no longer believe… that I had investigated and changed my mind on CO2 being a global crisis.  Let me repeat that – I started out believing it was a crisis, dug into the background and details, read materials unapproved of by those “in charge”, and changed my mind.  Part of that change included reading materials disapproved-of by many in my social circles.  (Aside: back in my college years people – including me – were proud to declare I read banned books!

Today, many of those same people now want to ban books – and websites and magazines.)  To any who would immediately dismiss me, I would counter with a simple question: When presented with broader, more in-depth evidence that – over time – paints a picture contradicting what you “know” is true, what do you do?  Which type of person are you? 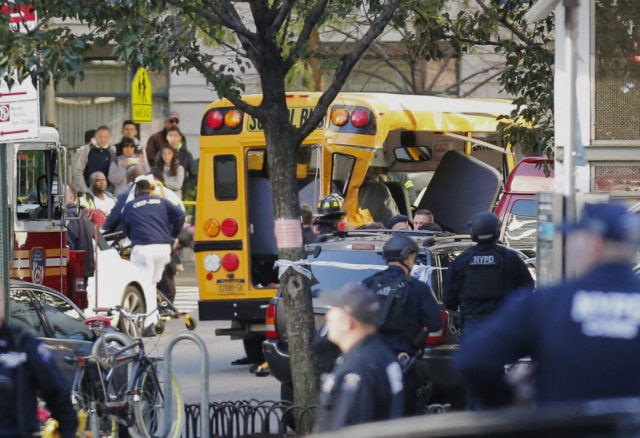 Multiple officials have identified the alleged truck driver who mowed down pedestrians Tuesday in lower Manhattan, killing eight and injuring about a dozen more, as 29-year-old Sayfullo Habibullaevic Saipov.

Officials are calling the incident “an act of terror.”

According to many witnesses, Saipov shouted “Allahu Akbar” upon exiting a Home Depot rental truck after intentionally driving the wrong way on a busy bike lane near the World Trade Center — the site of the deadliest terror attack on U.S. soil. After striking several people, witnesses say he “crashed deliberately into a school bus carrying at least three children,” CNBC reports. Leaving his vehicle with two imitation guns, he was shot in the abdomen by police, according to NYPD.

Saipov was reportedly taken to Bellevue Hospital and is in police custody. A paintball gun and pellet gun were recovered at the scene, according to law enforcement officials.

Six of the victims — all men — were pronounced dead at the scene, while two died later, Police Commissioner James O’Neill said.

Posted by Brock Townsend at Tuesday, October 31, 2017 No comments:

The Wall Street Journal editorial board dismissed Monday's indictments against former members of Trump's campaign, and said there is still no evidence that the campaign ever received anything of value from Russia.

On Monday, former Trump campaign official Paul Manafort was indicted for tax evasion and failure to register as an agent of a pro-Russia group in Ukraine. It was also revealed that Trump's former foreign policy adviser, George Papadopoulos, was cooperating with law enforcement after first lying to the FBI about past communications he had attempting to set up meetings between the campaign and Russia. 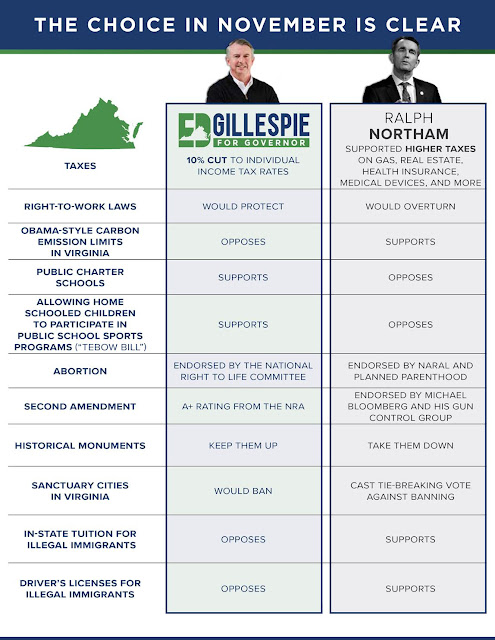 Gillespie: Latino Victory Fund Ad ‘A Sad Day for Virginia,’ Shows ‘Race Is Slipping Away’ From Northam
Posted by Brock Townsend at Tuesday, October 31, 2017 No comments:

Former Federal Prosecutor: Manafort Indictment Not Much There, and a Boon for Trump

The Paul Manafort indictment is much ado about nothing . . . except as a vehicle to squeeze Manafort, which is special counsel Robert Mueller’s objective — as we have been arguing for three months (see here, here, and here). Do not be fooled by the “Conspiracy against the United States” heading on Count One (page 23 of the indictment). This case has nothing to do with what Democrats and the media call “the attack on our democracy” (i.e., the Kremlin’s meddling in the 2016 election, supposedly in “collusion” with the Trump campaign). Essentially, Manafort and his associate, Richard W. Gates, are charged with (a) conspiring to conceal from the U.S. government about $75 million they made as unregistered foreign agents for Ukraine, years before the 2016 election (mainly, from 2006 through 2014), and (b) a money-laundering conspiracy.
There are twelve counts in all, but those are the two major allegations.
More @ NRO
Posted by Brock Townsend at Tuesday, October 31, 2017 No comments:

Who would ever believe that CNN’s Wolf Blitzer would practice journalism by asking pertinent questions in an interview with former CIA Director Leon Panetta? Well, it happened. Both men have been forced into this position after learning Hillary Clinton and the DNC helped pay for the infamous Trump dossier.

Blitzer asked Panetta how could the chair of the DNC and Clinton campaign but not know anything about payments to the law firm.

Anti-Trump Republican Senator John McCain of Arizona attacked President Donald Trump and his base of supporters during a speech Monday, declaring war on Nationalism and what he deemed “crackpot conspiracy theories.”

“We have to fight against propaganda and crackpot conspiracy theories. We have to fight isolationism, protectionism, and nativism. We have to defeat those who would worsen our divisions,” McCain said during a speech at the Brigade of Midshipmen at the United States Naval Academy in Annapolis, Maryland.

McCain, who is battling terminal brain cancer, promoted the globalist talking point of tearing down walls (read open borders), arguing “we have to remind our sons and daughters that we became the most powerful nation on earth by tearing down walls, not building them.”

Posted by Brock Townsend at Tuesday, October 31, 2017 No comments: