David Hathaway [send him mail] is a former supervisory DEA Agent who homeschools his nine children. He enjoys writing about the injustices of the state.

There is a lot of chatter amongst conservative "2nd Amendment cops" and military folks about how they will not obey the orders when the grand pronouncement is made to take guns. It will be a cop sit out. What will really happen is quite different. Your Republican cop or military buddy will gladly and patriotically take your guns.

Gun grabs and grabs of anything else – children, money, real estate, raw milk – don’t come down the chain of command as such. There is not an edict that comes out saying:
Obama Executive Order 666:

All federal, state, and local law enforcement officers and all active duty military personnel are hereby ordered and required to seize firearms from all persons whose only crime is non-compliance with the firearms transfer provisions contained in the Children’s and Puppies’ Omnibus Health and Safety Act of 2014. Operation Patriot Crush will commence at midnight on June 1, 2014. All will be required to participate from that date forward and to actively engage in door-to-door gun seizure operations against fellow Americans. Constitutional objections by officers will not be recognized and are hereby deemed meritless.

The Cost of Illegal Aliens in North Carolina – NCFIRE 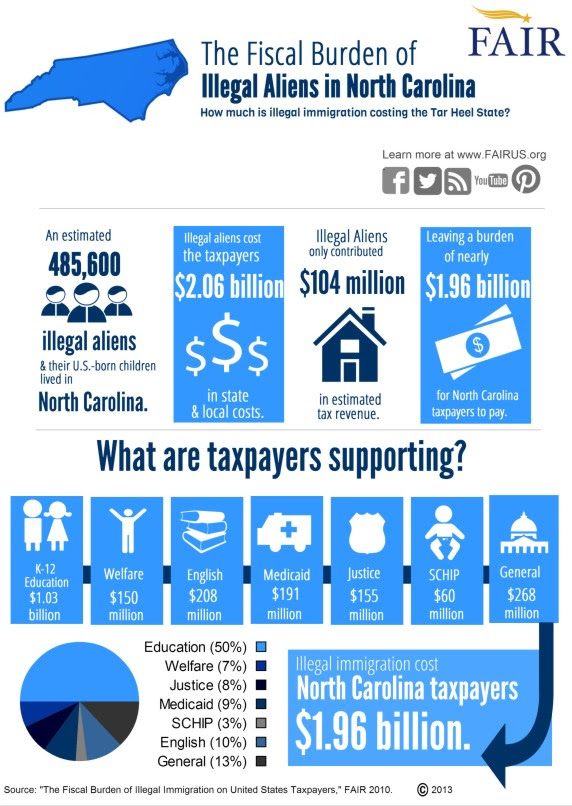 Bob Owens
The United States is not a democracy, and it never has been. We are a Republic, and we have Constitutional rights that were written to support the inalienable rights granted us by our Creator.

The oldest of humans rights is the right of self defense, and only slightly younger are the rights of self determination and the right of rebellion that Englightenment thinkers traced back to the earliest religious texts.

The Second Amendment was written to ensure that Americans could never be enslaved by their governments the way that other governments enslaved their people. It was their express desire that every law-abiding American citizen be armed "with the sword and every terrible weapon of war," including the most advanced military rifles, pistols, bayonets, grenades and cannon of their day (and yes, they even knew of early machine guns like the Puckle gun and rapid-fire assualt rifles like the Ferguson that fired 10-times faster than the common musket).

They knew--as our current generation of legislators on both sides of the aisle are proving--that the government cannot be trusted with liberty. They always weaken it and pervert it, attempting to subvert it for their benefit. Governments that last long enough invarably stop serving the people, and attempt to force the people to serve the government. We are living in a time where the government is attempting that usurpation, and it will be our distinct privildge and honor to go to war against that tyranny and restore the liberties won for us by our forefathers, restoring this nation to First Principles without the curse of exism and racism that haunted previous generations.

Civil war is a horrible thing, but not the most horrible of things. This time, perhaps, we will get it right.

I will not fire until fired upon, but if the enemies of Liberty mean to have battle, let it be on my watch, and let it begin here.
Posted by Brock Townsend at Saturday, April 06, 2013 No comments:

A firearms company that makes AR-15 style rifles for the iconic brand Colt, will open a plant in Breckenridge in Stephens County. Oregon company Bold Ideas confirmed the development Friday.

The company has not officially announced the opening, but employment applications are already available at the Breckenridge Chamber of Commerce. A non-specific, help wanted ad appeared in the local newspaper classifieds earlier in the week.

Sources say Colt Competition will move into a large vacant industrial space on the north side of town, previously used by Karsten Homes to manufacture mobile homes.

The move by Colt Competition into Breckenridge comes as the CEO of Colt Manufacturing in Connecticut has said there will soon be few good answers to keep his company in the state.

Connecticut passed some of the nation’s most restrictive gun laws this week.

The liberal media will do anything to pressure lawmakers to support President Obama’s gun-control agenda.

Politico published a story Wednesday with this headline: “Hunting Group Wants Background Checks.” The story gave the false impression that the millions of hunters in the U.S. support Mr. Obama’s push for “universal background checks.”

That is way off target. In fact, 31 well-known hunting and conservation groups sent a letter to Capitol Hill Thursday expressing opposition to intrusion by the federal government into private firearm transfers.

Politico only cites one small group in its story, Bull Moose Sportsmen, which claims 5,000 members. The story gives no context for the size of this group in relation to other hunting advocacy groups, nor its prominence in the community. The single poll cited in the Politico story is one commissioned by the group itself and claims 72 percent of hunters support “criminal background checks with some exceptions.”

None of the major hunting groups which represent the millions of law-abiding sportsmen was mentioned, nor the polling of those members.

In fact, Bull Moose Sportsmen is a fringe organization run by Democratic activists that has been rejected from membership into the major gun and hunting groups’ umbrella organization because it refuses to reveal its funding sources.

I missed this one from the 2nd.

For six years Troy James Knapp eluded authorities, moving from cabin to cabin across the Utah mountains, taking food and weapons and leaving notes to brag about it.

It all ended Tuesday as lawmen made what they called a surprisingly easy capture outside a remote cabin after the suspect fired off a few harmless shots.

"He was laughing with our guys. He said, `Boy, you really snuck up on me,"' said Sevier County Sheriff Nathan Curtis. "He threw his rifle down in the snow and said, `You got me."'

The 45-year-old survivalist is suspected of burglarizing dozens of Utah cabins and leaving taunting notes for owners -- "get off my mountain" -- and for sheriffs across several counties -- "gonna put you in the ground!" Now he faces multiple felonies in at least four counties, including for shooting at a police helicopter and officers on the ground.

Visit NBCNews.com for breaking news, world news, and news about the economy

From the Supreme Court to the couple down the street, these days everyone seems to be talking about same-sex marriage. But you don’t see many 4-year-olds weighing in on the topic, unless you’re watching MSNBC.

When Ball asked Ella about marriage, the child’s answers were vague, which is normal at her age. But interestingly enough, the little girl knows that same-sex marriage is allowed in New York.
“What if you were in love with a girl, would you marry a girl?” Ball asks.

“Um, only here I can marry a girl,” Ella replies. “Cause girls can marry girls, and boys can marry boys in New York.”

As they talk about how other states won’t allow that type of marriage, obviously goaded to the politically correct answer, Ella exclaims, “That’s crazy!”

Morici: Obama's Policies Are 'Not Going to Fix the American Economy'

Friday’s jobs data indicate the economy is slowing down, and President Barack Obama is a major part of the problem, says Peter Morici, professor of international business at the University of Maryland.

Non-farm payrolls rose only 88,000 in March. “It’s a very serious matter to have less than 100,000 jobs,” Morici told Newsmax TV in an exclusive interview.

“[There’s] this mythology in the White House that somehow you can raise taxes and not reduce jobs growth, although the Republicans believe that you can cut spending without reducing jobs growth,” he said. “It’s not surprising that we have a lousy jobs report.”

Obama is operating in a political manner, Morici said.

“Until the president decides he’s not running for president anymore and stops politicking the issue and starts seriously addressing the problems that are holding up the economy, he may be able to elevate somewhat his popularity ratings, but he’s not going to fix the American economy.”

Go prosecute some drug dealers or someone molesting children. Go prosecute one of them. I've got cancer and my wife just had a stroke. I don't think I deserve six months in jail or a fine because I was showing some respect."


l Scotty Brown wanted to do was honor his father-in-law's death by flying a Confederate flag next to the American flag on top of a 25-foot pole.


Brown said he used the Confederate flag because it's the state flag of Alabama where his father-in-law, Kenneth Grimes, was born.

The official state flag of Alabama is a crimson St. Andrew's cross on a white field, patterned after the Confederate Battle Flag, and adopted by the state in 1895, according to the web site 50states.com.

"They weren't sewn together," Brown said. "When they (the family) sent it to me, they said raise it up for the state of Alabama. It was just up for him out of respect. No one came to me and told me to take it down. I would have taken it down if they would have asked me. It was just up for respect of my wife's step father's death."

Brown was ticketed by an Otero County Sheriff's Office deputy for petty misdemeanor improper use of official symbols on Jan. 31.

"I die a Rebel out and out, and my last request is that my body be removed to White Country, Tennessee, and be buried in good Rebel soil."

Champ Ferguson spent a lifetime cementing his reputation as a churlish speculator in the Cumberland Mountains, but it was his wartime sadism that captivated the nation. Rather than enlist in the Confederate army, Ferguson led a vicious band in search of Union loyalists on his home turf.

Among other crimes, the vigilante killed his old friend William Frogg, bedridden with the measles, while his newborn baby wailed in a nearby crib. “You should have raised him right,” Ferguson supposedly told John Crabtree’s mother as she begged him to spare her son’s life. After a Confederate victory in Saltville, Va., his band killed wounded prisoners of war in their hospital beds.

Leaders of the Confederate army recognized the advantage of working with Ferguson’s band on an informal basis. Brig. Gen. John Hunt Morgan and Maj. Gen. Joseph Wheeler preferred to have Ferguson near the battlefield, rather than on it, as he frequently violated the rules of warfare.

At his 1865 Nashville, Tenn., trial on 53 counts of murder, the defense argued that Ferguson should be subject to Confederate surrender agreements and paroled. Instead, he was tried as a guerrilla acting outside the bounds of the army.

Newspapers from coast to coast covered the trial. Under the headline ”Unparalleled Atrocities,” the New York Times offered lengthy physical descriptions of Ferguson: “His large black eyes fairly glitter, and almost look through a person,” his “dress was slovenly and shabby,” but his “voice is firm” and “he is a man of iron nerve.”