"DEMOCRATS now are worst than the Viet Cong" 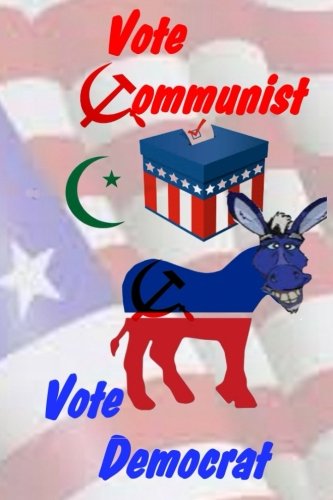 " DEMOCRATS now are worst than the Viet Cong"
~~Huongtam Nguyentran
Posted by Brock Townsend at Sunday, January 10, 2021 No comments:

Posted by Brock Townsend at Sunday, January 10, 2021 No comments:

NC: Confederate monument in Elizabeth City needs to go, but has no takers A Confederate monument in Elizabeth City slated for removal has no place to go.

Pasquotank County will even bear the cost of moving it for anyone who wants it.

Parler CEO Says Service Dropped By “Every Vendor” And Could End His Business "We are in a Communist country now, no ifs, ands or buts."

The Current Unpleasantness: Boxes and Revenge. We are in a Communist country now, no ifs, ands or buts

Parler CEO John Matze said today that his company has been dropped by virtually all of its business alliances after Amazon, Apple and Google ended their agreements with the social media service.

“Every vendor from text message services to email providers to our lawyers all ditched us too on the same day,” Matze said today on Fox News.

Matze conceded that the bans could put the company out of business while raising free speech issues, calling it “an assault on everybody.”

We can always depend on the Democrats and Republicans to steadily clarify that they compose a single-party tyranny. They exploited 9/11 to make themselves nearly inaccessible to the citizenry. Absurd levels of security made it such a pain to visit the Capitol that it was hardly worth the time to try. Their mail from citizens was delayed interminably to allow it to be checked for biological or chemical weapons after a few weaponized envelopes arrived at government facilities. They probably were sent by the FBI or another three-letter agency to justify denying citizens letter-access to their representatives. That left e-mail, which can be silently and immediately deleted with a single click. And, have you ever tried to contact the office of your senator or representative by telephone? Usually, you are diverted to a recording machine, or given a long list of confusing options. All of this was meant to close off Congress and Senate from the people they regard as untermenschen, hate with a passion, and whom they need only every two or four years from September to November.

The Worst of Days for Trump & Trumpists By Patrick J. Buchanan 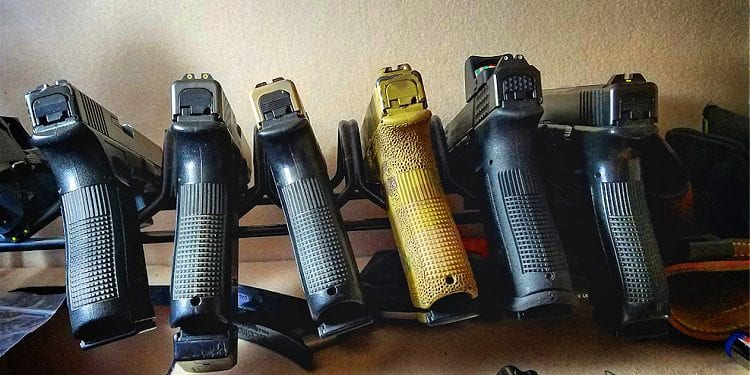 The most common gun question I field lately is, “Where can I get ammo?” Number two is, “Should I get this gun or that gun?” Mostly these questions aren’t from hard-core gun people. They’re from people who have some or no guns.

Local gun stores have dried up somewhat. Ammo in common calibers is close to non-existent and in many cases has been priced out of reality. 38 special is now rarer than a dead man who doesn’t vote Democrat. Basic “State of the Art” handguns have jumped in price or are constantly sold out. 9mm Glocks are often selling at $750.00 and up. So-called hi-cap magazines might as well be gold. Ar15’s are flying off the shelves. Even my liberal friends are buying guns and ammo.

Used guns for sale? Where? We all want to know!

The Current Unpleasantness: Boxes and Revenge. We are a Communist country now, no ifs, ands or buts 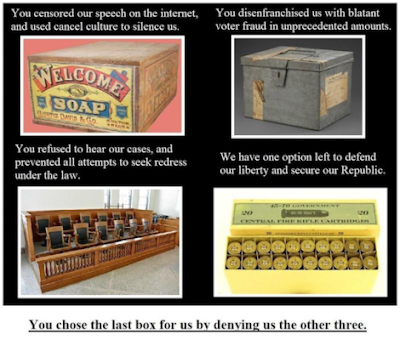 In other words, are you out of your ever loving little minds? These people STOLE two elections - it's now absolutely  obvious the nominal right is fine with this. They hope for crumbs from their masters' tables. The left is more likely to kill them, but never mind - in a row, in full view, and refused to let us have our day in court to show the evidence.

Because the American people are now peons with NO STANDING and can be disenfranchised with no punishment. But you're afraid that largely (truly) peaceful protesters "made them mad?"

Not just did they steal it, but they stole it with a brazenness that staggers - it was in your face, whaddaya gonna do about it  brazenness even as they gaslight us to say "What you saw, like votes being pulled from Trump and given to Biden, didn't really happen - what are you, some crazy conspiracy theorist kook?"  Then the enemedia declared victory and the Left seems poised to march to the White House
and both chambers with a burning desire for revenge.  They're not just talking "deplatforming"...
though there's that:
Mozilla, developers of Firefox: 'We need more than deplatforming' | The Post Millennial
Reza Aslan Calls For Genocide Against Trump Supporters. | Human Events
Things are going to get so much worse (gunfreezone.net)
ABC News Political Director Calls For Cleansing Of Trump Voters (thefederalist.com)

Firefox: 'We need more than deplatforming' | The Post Millennial

FBI Quietly Releases 284-page Report on Nancy Pelosi’s Corrupt Father Exposing Her Brother as a Repeat Child Rapist WHILE THE MEDIA WAS BUSY COVERING THE US CAPITOL PROTEST Wednesday Night! (Nancy Pelosi’s Name is Redacted From All Crimes)

Did you think you would see something in your lifetime like this?

Brit Hume
@brithume
This will not end well.

stuart stevens
@stuartpstevens
At @ProjectLincoln we are constructing a database of Trump officials & staff that will detail their roles in the Trump administration & track where they are now. No personal info, only professional. But they will be held accountable & not allowed to pretend they were not involved https://twitter.com/andrewfeinberg/status/1347922394497884167

Let me ask any of you – at least of a certain age.

Did you think you would see something in your lifetime like this?

We can multiply examples on social media, along with the explosion of irrationality and hatred.