A British warplane that was shot down in 1940 during World War II and was later meticulously restored to flying condition is slated to hit the auction block this summer.

The fighter plane — one of only two original Mk. 1 Spitfire models still able to fly — will be sold to commemorate the 75th anniversary of two pivotal WWII skirmishes: the Battle of France and the Battle of Britain. The historic aircraft could fetch up to $3.8 million, according to Christie's London, the auction house handling the sale.

Note to Jihadists: ‘..In America, We Shoot Back..’

Via om,ment by Anonymous on Mohammed Art Contest

A pair of would-be jihadists learned a very important lesson over the weekend – in America, we shoot back.

The men, believed to be radicalized roommates from Phoenix, tried to launch an attack on a gathering of freedom-lovers in of all places – the Lone Star State. It would turn out to be a most unfortunate decision.

Cinco de Mayo: The Battle of Puebla & Consequences to the USA & CSA

The Battle of Puebla was important for at least two reasons. First, although considerably outnumbered, the Mexicans defeated a much better-equipped French army. "This battle was significant in that the 4,000 Mexican soldiers were greatly outnumbered by the well-equipped French army of 8,000 that had not been defeated for almost 50 years." [27][28] [note 4] Second, since the Battle of Puebla, no country in the Americas has subsequently been invaded by any other European military force.[29][note 5]

Consequences to the United States

Donald W. Miles states, "At the time, there were fears in the United States that the French would use Mexico as a base to back the Confederacy, so President Lincoln and his Secretary of State went out of their way to appear 'neutral' in the Mexican situation. They did not want to take on the French and the Confederates at the same time".[30] Dr. Miles goes on to explain that "Napoleon III had hesitated to take on the United States directly, but now the news of the Civil War changed everything".[31] It meant that the Americans would be occupied with their Civil War for some time. Upon hearing the Spaniards and the British had sailed off to grab the customs house in Veracruz to start collecting their duties, Napoleon decided he would not only send the French navy, but would also start looking for someone to place as emperor in Mexico. He would then use Mexico as a base to help the Confederates win their war against the Union. Napoleon saw this as an opportunity not to be missed.[31]

Historian Justo Sierra has written in his Political Evolution of the Mexican People, that had Mexico not defeated the French in Puebla on May 5, 1862, France would have gone to the aid of the Confederacy in the U.S. Civil War and the United States' destiny would have been different.[32][33]

Ignacio Gonzalez wrote, "Some scholars, including José Antonio Burciaga, believe that had the French defeated México at Puebla, France would have aided the South in the American Civil War in order to free Southern ports of the Union Blockade. During this time, Confederate General Robert E. Lee was enjoying success, and French intervention could have had an impact on the Civil War."[21]
Posted by Brock Townsend at Tuesday, May 05, 2015 No comments:

Baltimore And Hillary–Two birds with one stone Those who have studied the MO (method of operation) for the Marxists for years have noted that one of their most productive agendas is to be able to undertake the orchestration of two seemingly unrelated events and work them out so that two different purposes are worked out and accomplished at the same time. They often, if all goes right, manage to kill two birds with one stone, and, as I said in an earlier article, many on the right are not even aware there are birds out there. As I check out some of these “conservative” websites on the Internet I have become convinced that many of them don’t have a clue while others–well, enough said.

Many have watched the purposeful escalation of racial tensions in Ferguson and Baltimore and can see how these situations are being worked out to serve the purpose of the One World Government clique. Part of this has been what we call the “Black Privilege” agenda. For so long we have had our “White Privilege” shoved down our throats that many, if not most, have not even had time to consider that such a thing as black privilege also exists–and that’s also part of the program.

A Race War in Slow Motion

Feral white women, characterized by low IQ and poor impulse-control, try to steal a black man's purse. Note chair--a white chair-- in upper left. It is a White Supremacist chair, and feels itself to be above blacks in Baltimore.

As a certified member of the curmudgeon's tribe, practicing our dismal and lonely trade, I am delighted by the events in Baltimore. Among curmudgeons, almost our only joy is the gratification of confirmation of our dark expectionions of humanity. In the case of Ballmer, a particular source of somber joy is the gap separating the Talking-Heads Chorale and reality. Wanton foolishness is ever a curmudgeonly delight.

The Talking-Heads Chorale will see the riots, are seeing the riots, not as an intensification of the undeclared racial war, but as a protest against racist police or the racism of whites.

Oh, quite. Never mind that Ballmer’s black government sets standards for the hiring, training, and behavior of its police, and half of the accused cops are black. But the conduct of their police cannot be the fault of blacks, because nothing is.


More @ Fred On Everything
Posted by Brock Townsend at Tuesday, May 05, 2015 No comments:

CPT Sarah Cudd from Public Health Command, *Fort Knox is only 1 of the 46 candidates who earned the EFMB yesterday at Fort Dix, NJ..27 April 2015. This is her last few seconds of the 12 Mile Foot March. The Foot March is the last event of the Expert Field Medical Badge (EFMB), and must be completed within 3 hours. If you want it, you have to go get it.  This EFMB candidate wanted it, and she got it. It took heart, guts, determination, falling down and getting up, and a little motivation from the crowd to get across the finish line.

* I was stationed there before I went to Vietnam.
Posted by Brock Townsend at Tuesday, May 05, 2015 11 comments:

Dem Rep: The IRS Should Investigate the NRA

The Coalition to Stop Gun Violence (CSGV) has launched a nationwide petition campaign asking the Federal Election Commission and the Internal Revenue Service to investigate “violations of federal law” by the National Rifle Association.

The petition drive cites the Yahoo News report which disclosed that the NRA had violated multiple provisions of the Federal Election Campaign Act, failed to report its political expenditures to the IRS for six consecutive years, and appears to have avoided paying federal taxes. 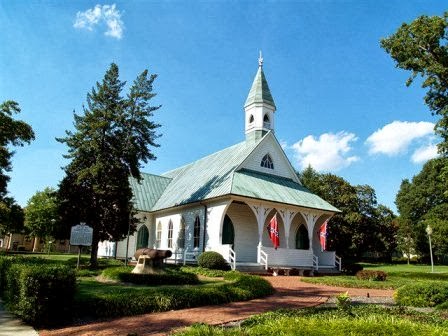 Our camp received notice from the VA DGS and the VMFA, jointly, that we would not receive  a renewal of out lease agreement but would receive a use  agreement which has yet to be defined, when the current term expires May 31, 2015. Our Executive Committee decided today to reject their position and pursue our legal and moral right to maintain the Chapel as befitting a Confederate Memorial. Section  97-5 of the Virginia Code gives preference to our camp as the successor of the RE Lee Camp #1, UCV. Under no circumstances should the VMFA control a Confederate memorial such as the Confederate War Memorial Chapel.

We request that our fellow SCV members and other responsible parties contact their General Assembly delegates and senators(see GA web site for contacts)  and ask them to contact the governor and to request that the Lee-Jackson Camp #1 be granted the  lease for the Confederate War  Memorial Chapel as imitated  in 1992.  The governor should also be contacted through  his web site or by telephone. It is best that all activities to support our mission be directed through our camp or the Division. Thank you for your support 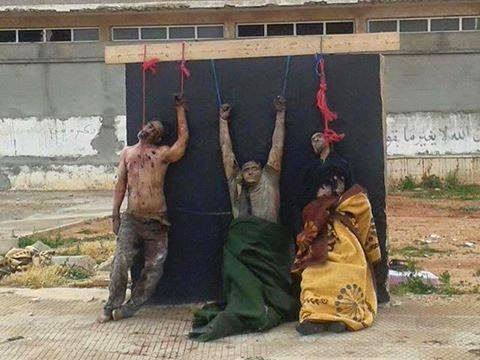 Three brothers have been crucified by Islamic State militants, according to Libyan media, after one of the brothers was accused of supporting the Libyan government, an act the extremist group considers to be apostasy under Shariah law.

Mohamed, Ali and Faraj Harir, members of a well-known local family, were publicly crucified as a warning to other residents of the town of Derma not to challenge the Islamic State’s authority, the Christian Post reported.

District Attorney John Chisholm is no better than an organized crime boss… because he IS a criminal running an organization, the state.

Here’s a review of his actions from the Daily Signal: “Wisconsin Home Invasions:

When the Government Upends Democracy.”


These raids—engineered by Milwaukee County District Attorney John Chisholm—represented nothing less than an attempt to upend democracy, to use law enforcement to thwart the will of the people and punish political enemies.

Because he opposed Republican Gov. Scott Walker—especially his reform of Wisconsin public employee unions—Chisholm used his position and a unique Wisconsin law to harass, threaten and embarrass Walker’s supporters and other Wisconsin conservatives. 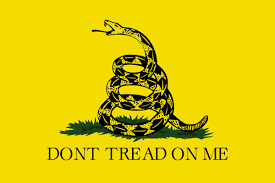 Rep. Louie Gohmert (TX-01) released the following statement on the ‘Jade Helm 15’ exercises scheduled to take place in Texas and various other states:

“Over the past few weeks, my office has been inundated with calls referring to the Jade Helm 15 military exercise scheduled to take place between July 15 and September 15, 2015. This military practice has some concerned that the U.S. Army is preparing for modern-day martial law.

Certainly, I can understand these concerns. When leaders within the current administration believe that major threats to the country include those who support the Constitution, are military veterans, or even ‘cling to guns or religion,’ patriotic Americans have reason to be concerned. We have seen people working in this administration use their government positions to persecute people with conservative beliefs in God, country, and notions such as honor and self-reliance. Because of the contempt and antipathy for the true patriots or even Christian saints persecuted for their Christian beliefs, it is no surprise that those who have experienced or noticed such persecution are legitimately suspicious. 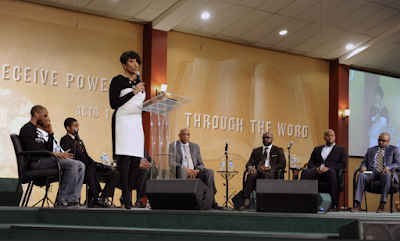 The city of Baltimore received over $1.8 billion from President Barack Obama’s stimulus law, including $467.1 million to invest in education and $26.5 million for crime prevention.

President Obama claimed last Tuesday that if the Republican-controlled Congress would implement his policies to make “massive investments in urban communities,” they could “make a difference right now” in the city, currently in upheaval following the death of Freddie Gray.

However, a Washington Free Beacon analysis found that the Obama administration and Democratically-controlled Congress did make a “massive” investment into Baltimore, appropriating $1,831,768,487 though the American Recovery and Reinvestment Act (ARRA), commonly known as the stimulus.


More @ The Washington Free Beacon
Posted by Brock Townsend at Tuesday, May 05, 2015 4 comments: