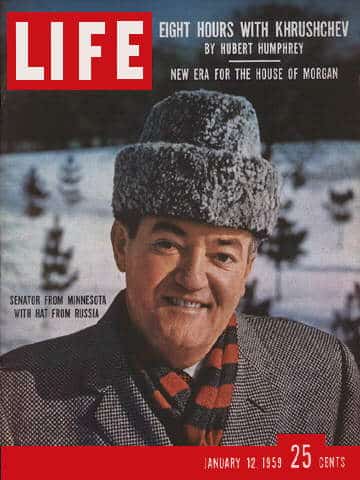 The following excerpt is from Senator Hubert Humphrey’s account of his interview with Soviet Premier Nikita Krushchev in 1959. Though claiming to be staunchly anti-communist, Humphrey in 1944 endorsed and promoted the fusion of the Farmer-Labor party with Democrats, as well accepting the support of “Stalinists and other assorted radicals who dominated the CIO [Congress of Industrial Organizations] in Minneapolis at this time.” Humphrey was also admired by Roosevelt’s pro-Soviet vice president, Henry Wallace. Vietnam isn't the only country in the region to change dramatically over the last several decades.

While we're huge fans of photos that transport us back to bygone eras of recent Vietnamese history, it's no less interesting to get a glimpse of our neighbors back in the day as well.

The below shots were taken in Cambodia in 1957 by LIFE Magazine photographer John Dominis. They portray Phnom Penh, the capital, as well as the famous ancient temples of Angkor Wat outside Siem Reap and some views of the Cambodian countryside.

In fact, some parts of these scenes haven't actually changed very much in the intervening years: the gilded Royal Palace still takes up prime real estate near Phnom Penh's riverfront, while the spectacular ruins and giant trees of Angkor still stand.

At the same time, it's hard not to look at these pictures and wonder what became of the people in them: their smiles and movements were captured 18 years before the genocidal Khmer Rouge swept into power, plunging Cambodia into terror and poverty, setting the country back decades.

White House Tells Trump Staff to STOP Packing Up: “Updated information will be shared in the coming days” We’ve been telling you something BIG is coming.

President Trump has vowed to fight voter fraud to the end.

He has PROMISED to fight corruption.

It appears that President Trump and his staff do NOT appear to be going anywhere.

The White House just ordered its staff to STOP packing up.

Georgia lawmakers recommend decertification of presidential election results: 'Any reported results must be viewed as untrustworthy'

A committee of Georgia state lawmakers is recommending the decertification of the 2020 presidential election results in the state, which went to Joe Biden.

The recommendation comes from the election law study subcommittee of the Standing Senate Judiciary Committee, which issued a report concluding the election "was chaotic and any reported results must be viewed as untrustworthy."

"The Legislature should carefully consider its obligations under the U.S. Constitution. If a majority of the General Assembly concurs with the findings of this report, the certification of the Election should be rescinded and the General Assembly should act to determine the proper Electors to be certified to the Electoral College in the 2020 presidential race," the committee's final report said.

Via John
Posted by Brock Townsend at Wednesday, December 23, 2020 No comments:

Will Wisconsin Republicans Reassign the Current Wisconsin Electoral College Votes to Trump After Judge Rules Over 200,000 Biden Votes Are Illegitimate? Will the current leadership in Wisconsin change their electoral college votes and assign them to President Trump now that over 200,000 Biden votes are labeled illegitimate or will the President have to continue to be the only one fighting for justice in Wisconsin?

We reported last week that the Wisconsin Supreme Court agreed with the President’s position on indefinitely confined cases:

BOOM: President Trump Is On Target In Wisconsin – Ballots Identified in Pristine Condition Similar to Fraudulent Ballots in Georgia and Michigan

Devin Nunes: We Now Have Clear Evidence The FBI Was Lying….This Is Really, Really Bad

Randell Young
@randell_young
FBI Director Chris Wray: 1. LIED to Congress; 2. REFUTED Nunes' Intel Committee Report; then 3. HID EVIDENCE that proved Nunes was 100 percent on the money. "Cover-Up" Chris Wray will obstruct justice until he is fired. The FBI is finished; Deep State and corrupt to the core.

New text messages showcase a compromised state agency, if they were lying about this, then what else are they lying about?

During an appearance on Fox News Channel’s “Sunday Morning Futures” this week, Rep. Devin Nunes (R-CA), the ranking member on the House Intelligence Committee, explained how text messages from disgraced FBI agent Peter Strzok revealed the FBI did not open an investigation because of actions of then-Trump campaign association George Papadopoulos.

Papadopoulos was used as justification for the FBI’s conterintelligence investigations relating to Trump-Russian connections, known as Crossfire Hurricane.

According to Nunes, Papadopoulos was a “phony target,” which was not revealed in testimony to Congress.

This didn’t make any headlines in the fake news media.

Georgia Republicans on the Senate Judiciary Committee voted last night on a senate report on election abuses, fraud, and abnormalities.

The Georgia committee recommended there is enough evidence to decertify the vote for Joe Biden.\

“No. The military will not be “deployed” to re-run an election,” Kinzinger said as he made it clear he would be surrendering to the Democrats. “It’s time for this to be shut down, and now. Gen. Flynn has lost his moral authority to be taken seriously, and the GOP needs to stand up to it. #RestoreOurGOP

Kinzinger was referring to a comment that Flynn made on Friday during an interview with Newsmax when he said President Donald Trump could deploy the military to “rerun” the 2020 election.

Flynn later responded, stating, “Study your history and the constitution.”

The National Defense Authorization Act Contains House Amendment H.R. 6395 That Would Prevent the President From Implementing The Insurrection Act! 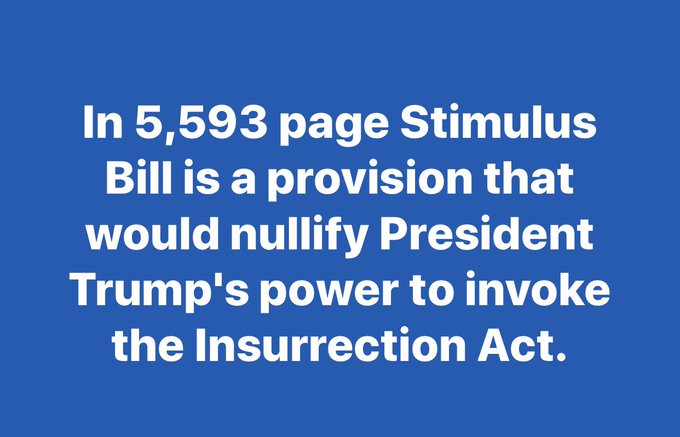 When the Communists/Globalists/DeepState try to sneak provision in funding bill nullifying @realDonaldTrump power to invoke the Insurrection Act, you know they are planning an insurrection. Steady. Be prepared. Pray.

Everyone keeps saying the Insurrection Act is Fake News.

If it’s so fake then why did the House have to introduce an Amendment in the new Defense Act trying to block President Trump’s ability to use it?

The National Defense Authorization Act a 5,893-page bill that President Trump hasn’t been shy about Vetoing has reportedly have had a sneaky provision that states it can ” Nullify the President’s use of the Insurrection Act”.

This information isn’t coming down from the grapevine but directly from Congress.gov.