Confederate flags were out in force at Hopkins Green Saturday afternoon during a rally protesting Washington and Lee's decision to remove the replica Confederate flags from around Robert E. Lee's statue in Lee Chapel.  The sentiments expressed at the rally expressed the determination of participants who came from South Carolina to Ohio to honor ancestors who had fought for the Confederacy during the Civil War.

More @ The News-Gazette
Posted by Brock Townsend at Saturday, July 26, 2014 No comments: 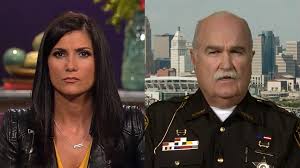 Ohio Sheriff Richard Jones had a unique idea to help with the cost of illegal aliens, who had committed crimes, currently taking up space in his jail. He sent a letter to Mexican President Enrique Pena Nieto charging him for the cost of each illegal alien housed in his jail. In response to Jones' letter, the federal government sent him a letter stating he had violated "a treaty of like, 1790."

In an appearance on BlazeTV's "Dana," the Butler County Sheriff told Dana Loesch the details.

"I sent him a bill for the prisoners that are in my jail. They came here illegally. I've not gotten any money from them, but I billed them so much. And, I'll tell you what I got in return, my life was threatened."

Jones said he got a call from the FBI saying there were three sheriffs in the country that were going to be killed by the drug cartels, and he was one of the three.

Chicago Mayor Rahm Emanuel, a former Obama administration chief of staff, wants to expand the city’s efforts to house young illegal immigrants from Central America, reportedly proposing to shelter an additional 1,000 of them by year’s end.

“The influx of unaccompanied child migrants is a growing humanitarian crisis that we can no longer ignore,” said Emanuel, according to The Chicago Tribune. “While we have our own challenges at home, we cannot turn our backs on children that are fleeing dangerous conditions.”

Observing what he could only describe as “chaos on the border” during a midnight tour of the Rio Grande on Friday, Rep. Steve Stockman, R-Texas, concluded, “President Obama is begging to be impeached.”

“For all I know, Obama is preparing to process five million illegal immigrant kids and teenagers into the United States,” Stockman said upon observing border operations near McAllen, Texas.

“He wants us to impeach him now,” Stockman theorized, “before the midterm election because his senior advisors believe that is the only chance the Democratic Party has to avoid a major electoral defeat. Evidently Obama believes impeachment could motivate the Democratic Party base to come out and vote.”

Accompanied by a WND film crew, Stockman began the evening by stopping at a massive Department of Homeland Security detention facility a mile or two north of the Mexican border, only to be encountered by seven or eight armed Border Patrol agents who approached Stockman and WND for questioning.

Though polite, a Border Patrol supervisor speaking from behind the chain-link fence that surrounded the facility refused to allow Stockman to tour the facility.

The Core of the Anti-Republican Argument

Lincoln Approved Of The Crittenden Compromise
Two-thirds of each House…recommended to the States a compromise thirteenth amendment to the Constitution, as follows: “No amendment shall be made to the Constitution which will authorize or give to Congress the power to abolish or interfere, within any State, with the domestic institutions thereof, including that of persons held to labor or service by the laws of said State.” Conservative Republicans voted with the Democrats to carry this measure of which Lincoln approved in his inaugural address. 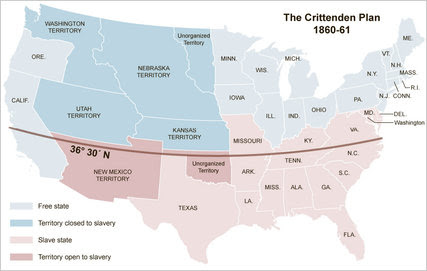 Republican leaders bent upon pushing the South to war effectively scuttled the Crittenden compromise plan as they feared a national referendum would welcome peaceful compromise. Before and throughout the war, efforts to avoid and end the bloodshed came almost entirely from the South.
Bernhard Thuersam, Chairman
North Carolina War Between the States Sesquicentennial Commission
"Unsurpassed Valor, Courage and Devotion to Liberty"
www.ncwbts150.com
"The Official Website of the North Carolina WBTS Sesquicentennial"

The Core of the Anti-Republican Argument

“Thurlow Weed had been predicting since November [1860] that if the Republicans could make the Union rather than slavery the central issue of the [sectional] crisis, a united North would rally behind him.  He . . . did not hesitate to urge Lincoln to take advantage of the sudden outburst of patriotic fervor.  From New York he told the president-elect, “We shall have a United north – a condition about which I have been filled with solicitude.”

[But] the imminence of war stirred a desperation for peace . . . and conciliationist leaders launched another offensive, spearheaded once more by Senators Crittenden and [Stephen] Douglas. Despite Republican opposition . . . the encouragement they had had been receiving across the North and Upper South convinced them that Northern public sentiment was behind compromise, particularly the Crittenden plan.

With that support in mind, the two senators issued a joint letter assuring concerned Southerners that their rights could be secured in the Union. On January 3, citing numerous reports of massive public sympathy for a peaceful resolution to the crisis, Crittenden asked the Senate to refer his amendments to the people, to be decided upon in national convention. He also sought to attract Republican support by adding two propositions drawn from Douglas’s failed proposal: a national ban on black voting and officeholding, and federal subsidization of black colonization to Africa.

[Douglas] charged the [uncompromising] Republicans with “attempt[ing] to manufacture partisan capital out of a question involving the peace and safety of the country.” Worse, they refused to help resolve the horrific crisis even though it was their own actions that had caused it . . . [and attacked them] for being naïve ideologues: for all their talk of upholding the Constitution and enforcing the laws, he stormed, they had to deal with the basic fact that “the revolution is complete.”

“In my opinion South Carolina has no right to secede,” he declared, “but she has done it.” The question now was not how to prevent disunion but how to reverse it – by force of arms or by a peaceful resolution of sectional differences? Here Douglas reached the core of the anti-Republican argument.

“Are we prepared in our hearts for war with our own brethren and kindred?” he demanded. “I confess I am not . . . I will not meditate war, nor tolerate the idea, until every effort at peaceful adjustment has been exhausted . . . I am for peace to save the Union.”

Bible Baptist Church in Carthage, Missouri is a small country church bursting with American pride. Old Glory is posted in the sanctuary. And every morning at summer youth camp, the teenagers pledge allegiance and sing the national anthem.

Patriotic holidays are big doings at Bible Baptist. On Memorial Day, the church ladies put out quite a spread – fried chicken, potato salad. Veterans would wear their uniforms and the preacher would salute them during the morning worship service.

At least 30,000 migrant Central American students are heading to classrooms across the country this fall, bring low levels of education that will bring down classroom averages, and overwhelm already struggling school districts, educators are warning.

The Obama administration announced earlier this month that some 30,340 foreign youths and children had been distributed, with the bulk, 4,280, remaining near where they crossed the southern border in Texas, reports The Daily Caller.

“This unscheduled closing is based on concerns for the safety of the facility and its staff on the day that the Sons of Confederate Veterans have scheduled a rally in Lexington." - Washington & LEE University

Just thought we would share a photo of the sign on the door of the Lee Chapel...along with one of the "very scary" rally participants that Washington and Lee claimed would be a threat to the "safety of the facility and its staff." 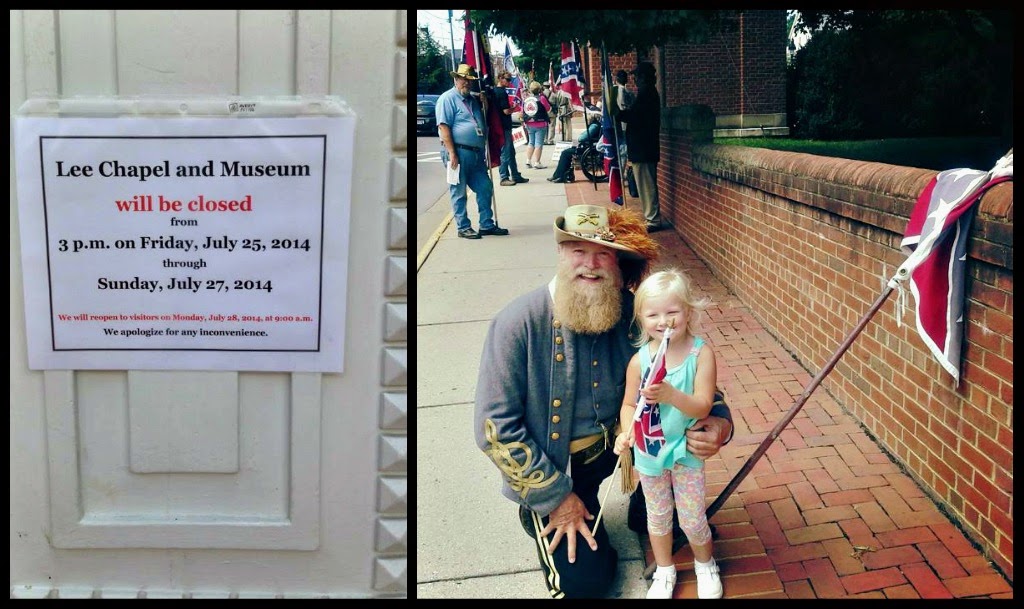 RETURN the flags!
RESTORE the honor! 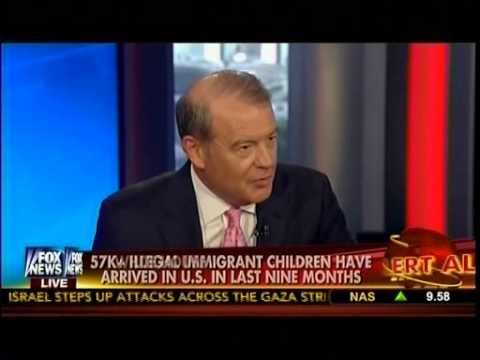 Lynn is a municipality on the brink. Key department officials say a recent influx of illegal immigrant children and families in the city is stressing almost every service from trash collection to healthcare.

"We have been aware of the unaccompanied children issue for quite a while, and we were able to absorb a lot of these children early on," said Lynn Mayor Judith Flanagan Kennedy. "But now it's gotten to the point where the school system is overwhelmed, our health department is overwhelmed, the city's budget is being sustainably altered in order of accommodate all of these admissions in the school department."

Flanagan Kennedy says the first contact for immigrant arrivals in the city is the school system.

The amount of new foreign born student admissions has nearly doubled in the last two years. This school year alone saw more than 600 new admissions. Among those students, 248 were from Guatemala. Flanagan Kennedy says of those 248 children, 126 were illegal, undocumented minors.

"They are not literate in any language, so they do need some skills.


Initial hopes were that somehow the bad press that the Bureau of Alcohol, Tobacco, Firearms, and Explosives (still known as ATF) has been receiving had caused the agency to pull back in its prosecution of criminal cases involving guns. But those hopes have faded.

Reports from Syracuse University showed that there were 6,791 such prosecutions recommended by the ATF in President George W. Bush’s last year (2008), while there were just 5,082 gun violation cases under Obama in 2013 — a decline of 25 percent. The all-time high occurred during the Bush administration in 2004, when 8,752 cases were brought by the Justice Department. And so far this year, prosecutions have declined even further, likely to end the year at fewer than 4,400, if the present trend continues.

On the surface this appears to contradict the president, who stated, following the Newtown massacre, "We should get tougher on people who buy guns with the express purpose of turning around and selling them to criminals. And we should severely punish anybody who helps them do this."


More @ The New American
Posted by Brock Townsend at Saturday, July 26, 2014 No comments:

Posted by Brock Townsend at Saturday, July 26, 2014 No comments: