Posted by Brock Townsend at Thursday, July 12, 2018 No comments: Links to this post 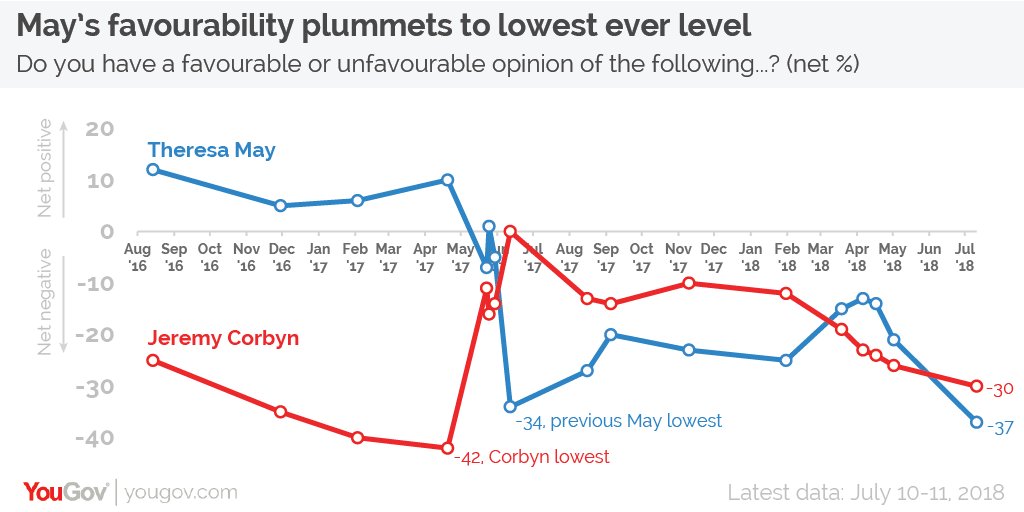 Theresa May’s personal favourability ratings amongst the British public have just sunk to an all-time low.

YouGov now have the PM with a -37 favourability rating, worse than her previous lowest -34 in the aftermath of the disastrous General Election.

The main reason for this, unsurprisingly, is that Leave voters have turned against her heavily.
At the start of May, she was on +10 with Leavers, but has now sunk to -23.


More @ Westmonster
Posted by Brock Townsend at Thursday, July 12, 2018 No comments: Links to this post “Lincoln, under no circumstances, would I vote for … So, I say, stand by the ‘Constitution and the Union’, and so long as the laws are enacted and administered according to the Constitution we are safe …“ (emphasis added) Letter from Sam Houston to Colonel A. Daly, August 14, 1860

The 1860 Election was still 3 months in the future and Houston had no inclination to pre-judge the new sectarian party that might be brought to power in Washington City. He was wrapping himself, as he always did, with a Jeffersonian understanding of constitutional liberty and wanted Texas protected by that same banner of Law. He was clear-sighted what might happen but remained a Jacksonian Dreamer. He knew the cherished Union of Jackson and his forefathers. Their dreams embodied his.


More @ The Abbeville Institute
Posted by Brock Townsend at Thursday, July 12, 2018 No comments: Links to this post

Trump slams May over 'very unfortunate' Brexit plan, says 'it will probably kill' US trade deal 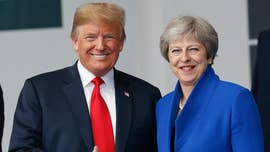 President Trump criticized British Prime Minister Theresa May's handling of Brexit Thursday, telling The Sun newspaper that her plan was "very unfortunate" and would "probably" kill any possible trade deal between the U.S. and the U.K.

The comments could be seen as a body blow to May's government, which is struggling to steady itself after two key Cabinet members -- including Foreign Secretary Boris Johnson -- resigned in protest earlier this week at her plan to keep Britain and the European Union in a free market for goods, with a more distant relationship for services.

More @ Fox
Posted by Brock Townsend at Thursday, July 12, 2018 No comments: Links to this post

VA: Left for Dead in Danville: How Globalism Is Killing Working Class America 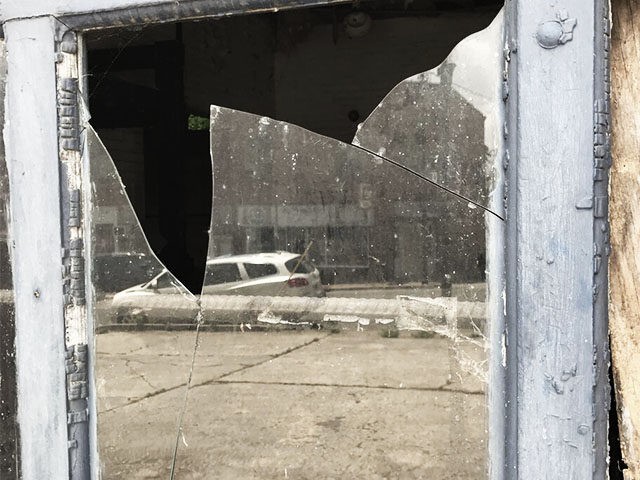 Twenty days after his meeting with congressmen, President Trump signed increased tariffs on Chinese steel and aluminum into law.
The move was met with mostly derision from the media. “Trump Misleads The Public On Steel Tariffs,” read the headline at Forbes. “Trump steel tariffs may leave these U.S. steelworkers jobless,” wrote Reuters. “The Real Danger of Trump’s Steel and Aluminum Tariffs,” blasted the New Yorker. “U.S. allies see Trump’s steel tariffs as an insult,” wrote the Washington Post.
At the signing ceremony in the Oval Office, Trump was surrounded by steel and aluminum workers who then asked the president to autograph their hardhats. Almost immediately after news spread, citing the tariffs, Pittsburgh-based U.S. Steel announced it would re-open an idle plant in Granite City, Illinois, and hire 500 new workers.

The city of Danville, Virginia sits in the bellybutton of the Blue Ridge Mountains, a hat-toss over the North Carolina border and about 85 miles northwest of Raleigh. It’s low hill country and Danville straddles the frothy, chocolate-milk waters of the Dan River. Downtown, once a booming trade district, today is a decomposed industrial husk, a tidy cluster of silent rectangles ensnared by broad, ghostly thoroughfares built for a time in the not-so-distant past when people and goods poured in and out of town.

Those days are gone, perhaps never to return.

The story of Danville is one echoed in countless communities across the country, a gutted middle class left for dead in the wake of sweeping international trade deals in Washington, applauded by liberal economists and a lockstep media portraying such policies as inevitable, ultimately good, and a win for the American consumer–a narrative usually coupled with condescending and disdainful attitudes toward displaced workers for a perceived inability to sprint ahead with the times. 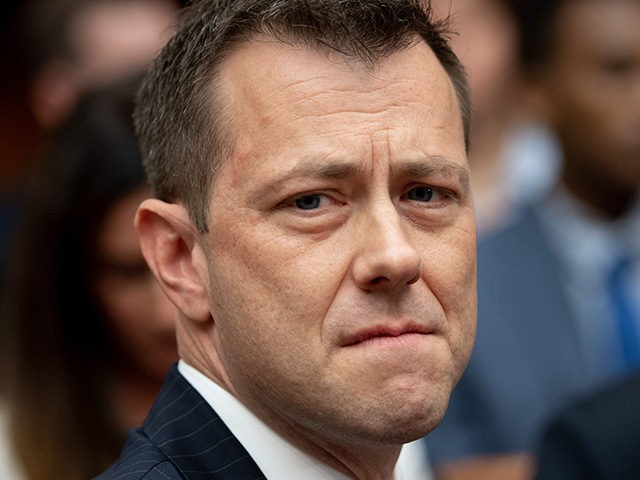 House Judiciary Committee Chairman Bob Goodlatte (R-VA) pressed disgraced FBI agent Peter Strzok before Congress Thursday on a series of anti-Trump text messages he sent during the 2016 election, including one correspondence about how he could smell Trump support during a southern Virginia Walmart visit.

STRZOK: Sir, I would draw a distinction between commenting on case-related matters versus discussion of personal belief. I think that are very different matters than saying “this person as a witness was not credible or this person as a subject or a target did or didn’t do something.

GOODLATTE: You can completely separate out your personal opinion is from what you discussed with others in investigations?

STRZOK: I’m telling you, sir, I separated out —

GOODLATTE: But you did not do that in regard to attorney Page who was also involved in these investigations?

STRZOK: Sir, I disagree with that. I separated out my personal beliefs from any action I took as an FBI agent every day.

GOODLATTE: Do you recognize how your vitriol against President Trump makes it appear you could never approach the case in a fair-minded manner?

STRZOK: Sir, of course, I appreciate that —

GOODLATTE: So, let’s discuss this text that hits home for me. On August 26, 2016, you texted Ms. Page, quote “Just went to a southern Virginia Walmart, I could smell the Trump support. Smell is in capital letters. What does Trump support smell like, Mr. Strzok?

STRZOK: Sir, that’s an expression of speech. I clearly wasn’t smelling one thing or the other. What I was commenting on was living in Northern Virginia-

GOODLATTE: What does that mean?

STRZOK: What I meant by that was living in Northern Virginia, having traveled 150 miles south within the same state, I was struck by the extraordinary difference in the expression of political opinion amongst the community there –

GOODLATTE: You described that as “smell” in capital letters —

STRZOK: Sir, that was a quick choice in a text.

Posted by Brock Townsend at Thursday, July 12, 2018 No comments: Links to this post

Nikki Hates Guns As Much As She Hates Confederate Flags 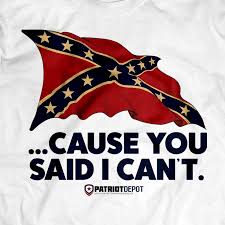 Via comment by Reborn on Is Dixie A Captive Nation? "She is nothing but an aggressive, over-bearing, trouble maker."

I don’t doubt that Donald Trump has tried to do his best for the country and he has done a lot better than any of the presidents in my lifetime, but some of the people he has picked for cabinet officers and for other positions have been people that have only made his job more difficult. Some he picked fought him from day one because they were part of the Deep State and their  agenda was to neutralize him as much as possible. He finally saw through some of them and they moved on, but he hasn’t seen through all of them yet–and one major problem for him is his United Nations Ambassador, Nimrata (Nikki) Haley. Some of what she does goes against the core values of his base and you have to wonder sometimes just who Ms. Haley is working for.

Posted by Brock Townsend at Thursday, July 12, 2018 2 comments: Links to this post

Old Saigon Building of the Week: The Glitz and Glam of Tu Do Nightclub

Among those snazzy night hangouts, Tu Do Nightclub was perhaps one of the most iconic landmarks in the minds of old Saigoneers, for a variety of reasons. Located at the corner of Tu Do and Thai Lap Thanh streets (now Dong Khoi and Dong Du, respectively), during its heyday, music lovers and social butterflies flocked to the comfortable booths of Tu Do every night to sway along with the hottest crooners of the day: Khanh Ly, Tuan Ngoc, Khanh Ha, etc.

Up until at least the 1950s, the building that housed Tu Do was home to La Croix du Sud (The Southern Cross), a café and nightclub that was a favorite haunt for French soldiers. The street was first named Rue Catinat during the French occupation, and was renamed to Tu Do in 1955, but most locals still referred to its French name for at least the next decade or so. Dong Du Street’s name back then was Amiral Dupré.


More @ Saigoneer
Posted by Brock Townsend at Thursday, July 12, 2018 No comments: Links to this post

USA – WSVN TV 7 & WJXT Fox 30, report 06-12-18 in Jacksonville, Florida, the incident began when a 36 year old suspect robbed a Walmart liquor store, and attempted to flee in a silver Ford SUV.
Witnesses said the vehicle would not start, so he first tried to carjack a male driver at knifepoint, cutting him on his arms and legs.


That driver said “I reached in between my glove box and my console, between my seats, reached down and got my weapon and brandished it for him. He was like, ‘Don’t shoot me.’ I was like, ‘Then get out of here.’”

More @ LRC
Posted by Brock Townsend at Thursday, July 12, 2018 No comments: Links to this post

Gowdy slams Strzok: 'I don't give a damn what you appreciate' 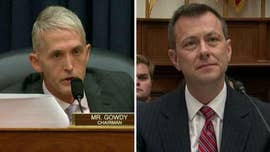 Republican Rep. Trey Gowdy tore into FBI official Peter Strzok during Thursday's hearing before the House oversight and judiciary committees, accusing him of "textbook bias" with his anti-Trump texts.

A lengthy and fiery exchange between the two ended with a sharp rejoinder from the former prosecutor.

After Strzok said he was booted from the Russia probe over an "appearance" issue and not because of "bias," he said he didn't appreciate Gowdy saying otherwise.

“I don’t give a damn what you appreciate, Agent Strzok,” Gowdy shot back. “I don’t appreciate having an FBI agent with an unprecedented level of animus working on two major investigations in 2016.”

Reciprocity Is The Method to Trump's Madness 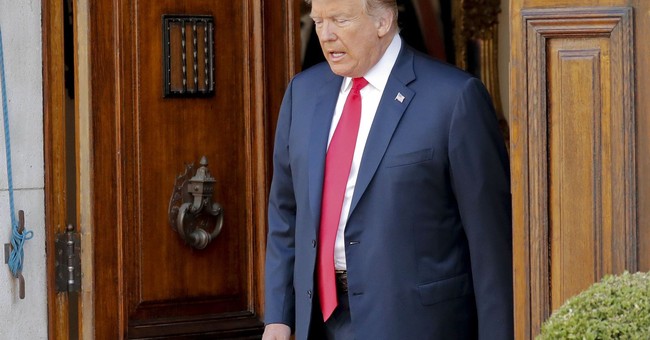 Critics of Donald Trump claim there is no rhyme or reason to his foreign policy. But if there is a consistency, it might be called reciprocity.

Trump tries to force other countries to treat the U.S. as it treats them. In "don't tread on me" style, he also warns enemies that any aggressive act will be replied to in kind.

The underlying principle of Trump commercial reciprocity is that the United States is no longer powerful or wealthy enough to alone underwrite the security of the West. It can no longer assume sole enforcement of the rules and protocols of the postwar global order.


More @ Townhall
Posted by Brock Townsend at Thursday, July 12, 2018 No comments: Links to this post

After a contentious exchange between Democrats and Republicans during a House Judiciary and Oversight Committee hearing on Capitol Hill Thursday, Judiciary Chairman Bob Goodlatte informed FBI Deputy Assistant Director Peter Strzok he will be recalled later today and voted in contempt.

The move comes after Strzok refused to answer a question from Oversight Chairman Trey Gowdy.

Gowdy asked Strzok how many people he had interviewed as part of the Special Counsel before discussed impeachment for President Trump. Strzok discussed impeachment of President Trump in a text message to FBI lawyer Lisa Page just one day after Deputy Attorney General Rod Rosenstein appointed Bob Mueller to lead the Special Counsel Russia investigation.
Posted by Brock Townsend at Thursday, July 12, 2018 4 comments: Links to this post