We mustn’t give an inch, not our monuments, our flags, our history, our dialect, our drawl, our food, our customs, our music, or our ancestry. And we sure as hell ain’t fixin’ to get on that train. Southern lives matter, y’all.


Modern progressives are just as evil in their bloodlust against the South as were William Tecumseh Sherman and Philip Sheridan. Today’s leftists may not yet be waging the shock-and-awe total warfare that the Union generals inflicted upon Southern civilians (whites and blacks alike) and their dwellings, businesses, churches, infrastructure, and food supply, but their aim is still the same: to have the Southern tradition and her people “annihilated and destroyed.”

“The government of the U.S. has any and all rights which they choose to enforce in war – to take their lives, their homes, their land, their everything,” Sherman wrote in 1864. “War is simply power unrestrained by the Constitution or compact … to the petulant and persistent secessionists, why, death is mercy, and the quicker he or she is disposed of the better.”

So far, progressives aren’t marching to the sea, raping and burning whole cities, but they are vandalizing, spreading Confederaphobia, and encouraging a kill-whitey message.

Vietnam: No arms, no problem 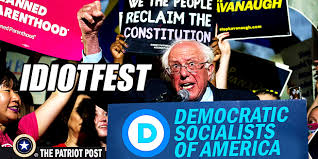 Civil Rights Activist Blasts Students for Destroying Statue: 'Does Nothing' for Black 'Lives in Chicago'

Posted by Brock Townsend at Saturday, August 25, 2018 No comments:

The mother of a 10-year-old boy in North Carolina is outraged that her son was recently punished for calling his fifth grade teacher "ma’am.”

“I was in disbelief,” Teretha Wilson, the boy’s mother, told Fox News on Saturday.

Wilson noticed her son, Tamarion, was not himself when she picked him up from the bus stop earlier this week.

“I asked him what was wrong, and he told me he got in trouble for saying 'ma’am' to a teacher. I was confused,” she said.

Why We Can't Ignore the "Militia" Clause of the Second Amendment

While many defenders of private gun ownership recognize that the Second Amendment was written to provide some sort of counterbalance against the coercive power of the state, this argument is often left far too vague to reflect an accurate view of this historical context surrounding the Amendment.

British politician Paul Westin was arrested in London today after reading a quote by Winston Churchill on Islam.
Churchill wrote the famous quote in his 1899 book The River War on the British conquest of the Sudan.


A security guard who apparently witnessed police officers in Texas struggle to arrest a suspect chose to record the incident on her cellphone instead of help the officers get the situation under control. Two Houston cops were in a serious struggle with a suspect who appeared to be resisting arrest at a gas station. Several bystanders recorded the incident with their cellphones, including the security guard working at the station. “Stop f***ing taping and help me,” a cop appears to say to her.
Posted by Brock Townsend at Saturday, August 25, 2018 11 comments:

Senator Rand Paul rightly blasted the leadership of his own party this week when they blocked an amendment to defund Planned Parenthood. The government will continue handing hundreds of millions of dollars to a company that executes over 300 thousand human children every year. As the Republicans are in charge of the government, and have taken active measures to prevent the severing of the abortion industry's tax payer pipeline, it must be said that the Republican Party is funding Planned Parenthood. The Republican Party is taking money out of our pockets and giving it to the blood-soaked hands of baby killers. This is no longer just a Democrat initiative.


More @ The Daily Wire
Posted by Brock Townsend at Saturday, August 25, 2018 No comments:

North Caroline Police filed charges Friday against three people they say played some part in tearing down a century-old Confederate statue during a protest this week.

Hundreds of student protesters gathered at the University of North Carolina’s campus in Chapel Hill Monday night to bring down the statue known as “Silent Sam.”

Using ropes and violent force, the protesters toppled the statute which had stood that ground since 1913.

On Hush Money, the President’s Best Defense Is Lack of Criminal Intent

The prosecutor must establish that Trump understood that his conduct was illegal. The government is unlikely to meet such a demanding burden of proof.

Paying hush money is not admirable, but neither is it criminal.

You can be forgiven if you’ve forgotten there even is a Mueller investigation.

Just a week ago, the country was on tenterhooks as the jury in Paul Manafort’s trial headed into the weekend without having reached a verdict. Would they hang? Had Special Counsel Robert Mueller overreached? Did federal judge T. S. Ellis of the Eastern District of Virginia undermine the prosecutors?

The prosecutor must establish that Trump understood that his conduct was illegal. The government is unlikely to meet such a demanding burden of proof.

You can be forgiven if you’ve forgotten there even is a Mueller investigation.

Just a week ago, the country was on tenterhooks as the jury in Paul Manafort’s trial headed into the weekend without having reached a verdict. Would they hang? Had Special Counsel Robert Mueller overreached? Did federal judge T. S. Ellis of the Eastern District of Virginia undermine the prosecutors?