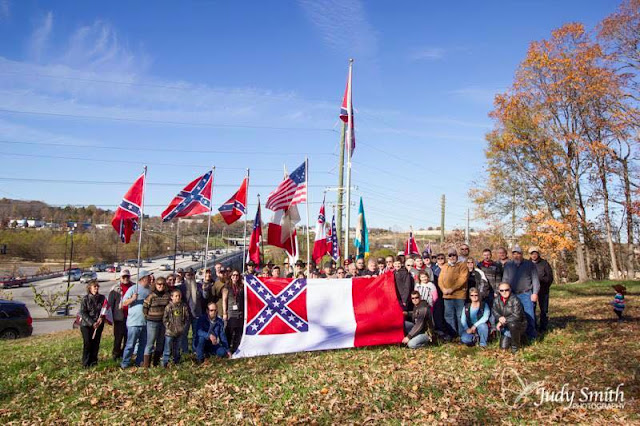 Before heading out to raise and dedicate four new memorial flags in Danville yesterday, Va Flaggers and supporters re-dedicated the Robertson Bridge/Memorial Drive site by replacing the Third National that was stolen a few weeks ago.

Alert! Alert! A Massachusetts university is scrambling to protect its students from trauma after school officials discovered what they consider an “upsetting” image on a laptop.

Was it a terror threat? No.

An armed lunatic threatening the school? No.

The alarming “bias incident” involved … a photo of a Confederate flag.

INTELLIGENCE chiefs fear that British jihadis helped make the suicide vests worn by the Paris attackers and could be plotting a similar outrage in the UK.

MI5 has intercepted internet “chatter” between the terrorists who brought carnage to the French capital, British militants and Islamic State commanders in Syria.

Pregnant Bronx mom fatally stabbed by woman who cut child out of her womb: officials

Via David
A deranged woman fatally stabbed an expectant mom before cutting a baby girl from the dying victim’s womb.

Officials described the Friday delivery as a crude operation where the girl was “surgically removed by the perpetrator.”

The newborn was taken to Montefiore Medical Center and listed in stable condition hours after her mother was murdered.

The mom, Angelikque Sutton, was 8½ months pregnant and preparing for the baby’s arrival on Dec. 2. Her baby registry on thebump.com was full of items she needed, including a Koala baby folding hamper, a convertible crib and a pink baby essentials duffel diaper bag. She also was registered at Babies “R” Us and Target.

On November 21 a group of armed protesters surrounded a Irving, Florida, mosque to oppose the pending influx of Syrian refugees and the “Islamization of America.”

Some of the protesters had AR-15 rifles slung across their shoulders while others carried bolt action rifles popular for their long range accuracy. They explained that they were not carrying the weapons for offensive purposes, but to defend themselves in the event that things went badly during the protest.

Muslim terrorists took the lives of over 120 people. Here are my observations:

I am aghast and flummoxed at the number of Americans who just cannot seem to comprehend the culpability that the U.S. government has in all of this. This only makes sense when one takes into account that the vast majority of Americans only know what the mainstream media tells them. And, without question, our mainstream media is nothing more than a propaganda ministry for Washington, D.C. Without a doubt, the controlled major media in America rivals the controlled major media of Hitler’s Germany or Stalin’s Soviet Union.

Make no mistake about it: the wars in the Middle East are Washington’s wars.

In New Video, A Grateful Al-Qaeda Thanks US For Supplying Anti-Tank Missiles

On September 30, just hours after a three star Russian general strolled into the US embassy in Baghdad and told the staff to inform Washington that Moscow would begin airstrikes in Syria “in one hour”, the Western media was alive with accusations that The Kremlin wasn’t targeting ISIS, but rather other, US and Saudi-backed rebel groups fighting Assad’s depleted SAA. Here’s what WSJ said at the time:


“Among seven areas that Syrian state media listed as targets of Russian strikes, only one—an area east of the town of Salamiyah in Hama province—has a known presence of Islamic State fighters. The other areas listed are largely dominated by moderate rebel factions or Islamist groups, such as Ahrar al-Sham and the al Qaeda-affiliated Nusra Front.”


Yes, “moderate rebel factions such as the al-Qaeda-affiliated Nusra Front.”


Barack Obama gave ISIS 45 minutes to scamper before he bombed them.

You wouldn’t want anyone to get hurt now, would you?

It was part of Barack Obama’s “escalation” plan against the ISIS jayvee team.