We formed the Saigon Mission Association after our evacuation from Vietnam in 1975.

Damn  we're getting old, though General Register does look good. :)
Posted by Brock Townsend at Friday, December 12, 2014 4 comments: Links to this post

Termites At Work on American History

President Barack Obama has launched a new initiative to get American schools to teach computer science. Appearing at a Newark, New Jersey, middle school, the president suggested that students, especially girls and minorities, should learn "not just how to use a smartphone but to create the apps for a smartphone."

If we lived in a country where most students were graduating from high school with good English and math skills and with a firm grasp of American history and government, we might be in a position to make time for advanced computer skills. But we don't. Only about 68 percent of Newark's students even graduate from high school.

As for those students who do graduate, not just in Newark but across the country, it seems that smartphone skills come pretty naturally. Who hasn't seen a middle-aged adult getting tutoring on his iPhone from a teenager?

Meanwhile, Obama's progressive allies have been assiduously slanting the teaching of American history and government to produce new generations of left-leaning citizens -- that is, when they teach civics at all.

Sheriff: Man posed as deputy to scam elderly WWII vet out of $14K

The Jefferson County Sheriff's Office is trying to identify a man who scammed an 87-year-old World War II veteran out of $14,000 by impersonating a deputy.

Deputies say the victim had been scammed out of $5,000 in October but had not reported it.

On Dec. 4, the victim says he was contacted by a man who claimed to be an investigator with the sheriff's office.

“The man told him that an arrest had been made in the original scam and that his help was needed to take down the operation,” Chief Deputy Randy Christian said.

The victim decided to help and left to meet the man at a restaurant in Bessemer on Academy Way.


More with video @ Fox
Posted by Brock Townsend at Friday, December 12, 2014 No comments: Links to this post

When MIT professor and Obamacare architect Jonathan Gruber testified in front of Congress earlier this week about the lack of transparency used to deceive the American people about the Affordable Care Act, he claimed under oath, "I am not the architect of Obamacare." For reference, the dictionary definition of "architect" is "the deviser, maker or creator of anything."

During an exchange with Republican Rep. Cynthia Lummis, Gruber said he did not "draft the legislation" and argued he was simply an adviser to the White House before Obamacare was pushed through in 2010.


More with videos @ Townhall
Posted by Brock Townsend at Friday, December 12, 2014 4 comments: Links to this post

Posted by Brock Townsend at Friday, December 12, 2014 6 comments: Links to this post

Whenever a discussion arises over the “best” shotgun of a particular action type, the debate seems to center on a narrow group of brands. Whether the conversation occurs in a duck blind or online forum, it invariably proceeds thusly: What’s the better pump-action, a Remington 870 or Mossberg 500?

Often it’s as if the other brands do not exist, which is a shame, because there are plenty of quality shotguns flying just a touch below the radar. Sometimes they’re more affordable, sometimes not—but when I see one in a hunter’s hands, I know he made a smart buying decision rather than yielding to populist hype.

Here are five underrated shotguns that warrant consideration before your next purchase.

So It Begins: Congress to Cut Pension Plans

Congressional leaders hammer out deal to allow pension plans to cut retiree benefits ... The measure would alter 40 years of federal law and could affect millions of workers. A measure that would for the first time allow the benefits of current retirees to be severely cut is set to be attached to a massive spending bill, part of an effort to save some of the nation's most distressed pension plans. – Washington Post

Dominant Social Theme: It is necessary to cut people's benefits so that the state does not become insolvent.

Free-Market Analysis: This is huge news, and it's definitely launched in a big way on the mainstream media.

As of this writing, the situation is still in flux but from what we've read this legislation is taking place. Even if it doesn't happen this time, it's part of a trend that will reoccur.

Yes, it is a really – really – big story. People's savings and retirement benefits have been decimated by price and monetary inflation. They've lost their jobs and been forced out of their homes. And now the federal government is directly attacking pensions.


More @ The Daily Bell
Posted by Brock Townsend at Friday, December 12, 2014 10 comments: Links to this post 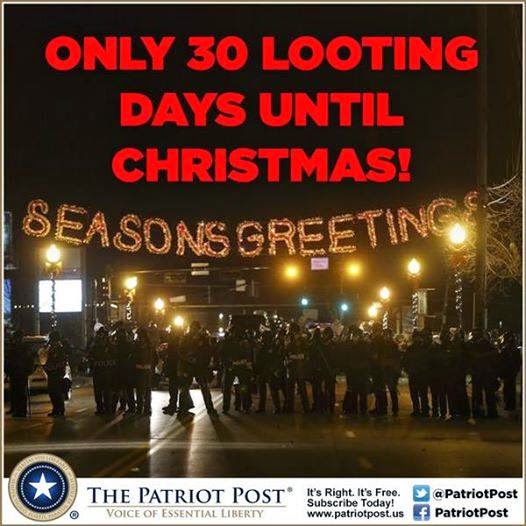 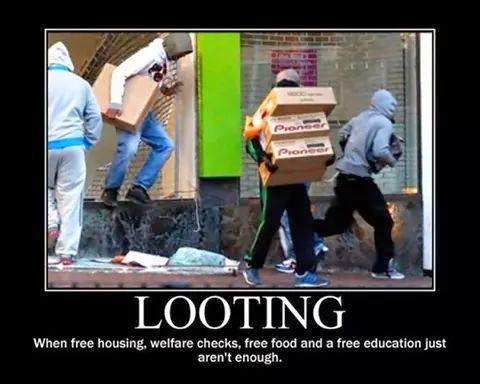 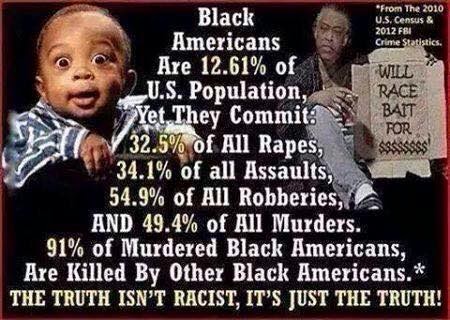 Posted by Brock Townsend at Friday, December 12, 2014 14 comments: Links to this post

Mark Kessler – Coming Out of the Closet – Part 4 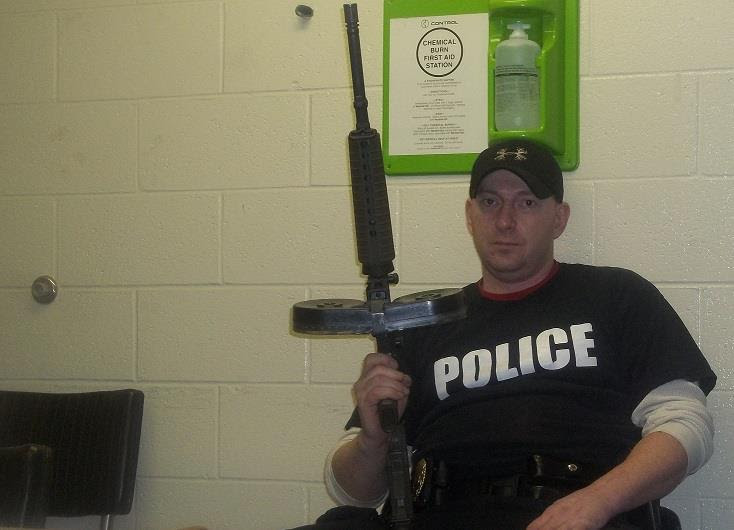 Fox News Network’s Alan Colmes had a special guest on Tuesday, December 2, 2014. As so often happens on television, the guest was “coming out of the closet”, though this had nothing to do with sexual orientation.

The guest, Chief Mark Kessler, formerly chief of the Borough of Gilberton, Pennsylvania Police Department, explained why he got into going after patriots, apparently with a total disregard for the intention of the Second Amendment.

Here is an audio of the entire Colmes/Kessler interview.

Following are some excerpts from that interview:


More @ Outpost of Freedom
Posted by Brock Townsend at Friday, December 12, 2014 4 comments: Links to this post

School kids have been moaning about tasteless fare local governments adopt to comply with first lady Michelle Obama’s war on the waistline and posting photos of the mystery meals online.

The Sidwell Friends School, the $36,000-a-year private academy attended by Malia and Sasha Obama, also posts its menus on the Internet.


More @ Newsmax
Posted by Brock Townsend at Friday, December 12, 2014 No comments: Links to this post

You Don’t Have To Tolerate Anti-Southern Bigots: The Simple Problem With Tolerance Is That You Get What You Tolerate

I tend to think you should tolerate someone who disagrees with your point of view if they are decent enough to tolerate you. If it weren’t for gentlemanly differences of opinion, America wouldn’t have a horseracing industry. What you don’t have to put up with is someone who is openly bigoted against you. If they hate you, you are under no obligation to tolerate them at all.

The Slate Star Codex Blog is an acquired taste. This is a polite way of saying that I’ve acquired it, but would understand it if others didn’t. However, I’ll say without equivocation that they’ve taken home the award for All-Time Great TL/DR Blog post with the entry “I Can Tolerate Anything Except The Outgroup” by Scott Alexander. In fact, I’d argue it takes that award home in a brown paper bag like a bottle of Scotch from the ABC. In it he explains why tolerance should be selectively applied to only those who disagree with us in a decent and respectful fashion.

It has got my vote.

San Diego-based Alternative Ballistics has introduced one of the most terrifying “less lethal” alternatives I’ve ever seen, called “The alternative.”

The single-use device is kept in a pouch on an officer’s duty belt, and when the officer runs into an encounter where lethal force is authorized, but not desired, he can then grab the device from the pouch mounted on his support-hand side, and slide the entire device over the muzzle of his duty weapon.

The device itself consists of a clear plastic “docking station” that slides on to the end of the gun, and the projectile, which looks roughly like a clown’s nose.


Watching these images one cannot help but feel terribly sad and disappointed at how abuses like this are being sold as “necessary protests” by figures like Barack Obama. (Yes, he called these Black power protests “necessary” recently during a television interview.) These businesses are owned by minority families who have risen up from the Big Government plantation so many others among them have refused to leave. For doing so, they are now being punished as a horde of looters storm their life’s work and rob them at gunpoint.

This is America in the Age of Obama, and it is a horrible-horrible mess…

I stopped caring today because parents refuse to teach their kids right from wrong and blame us when they are caught breaking the law. I stopped caring today because parents tell their little kids to be good or “the police will take you away” embedding a fear from year one. Moms hate us in their schools because we frighten them and remind them of the evil that lurks in the world.

Undercover Cop Pulls Gun on Garner Protesters After Being Outed 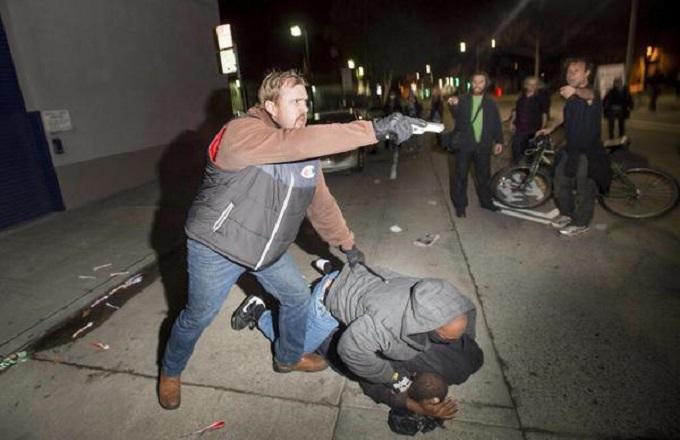 Sideways?  Maybe try it upside down next time, then you can be a true member of the hood........

An undercover police officer was photographed pointing his gun at Garner/Ferguson protesters Wednesday evening in Oakland, Calif., as he and his partner faced off with demonstrators.
Reuters photographer Noah Berger captured the stunning moment:

Sen. Coburn's Farewell Remarks: Our Charge is to Uphold the Constitution 1:31

Posted by Brock Townsend at Friday, December 12, 2014 No comments: Links to this post