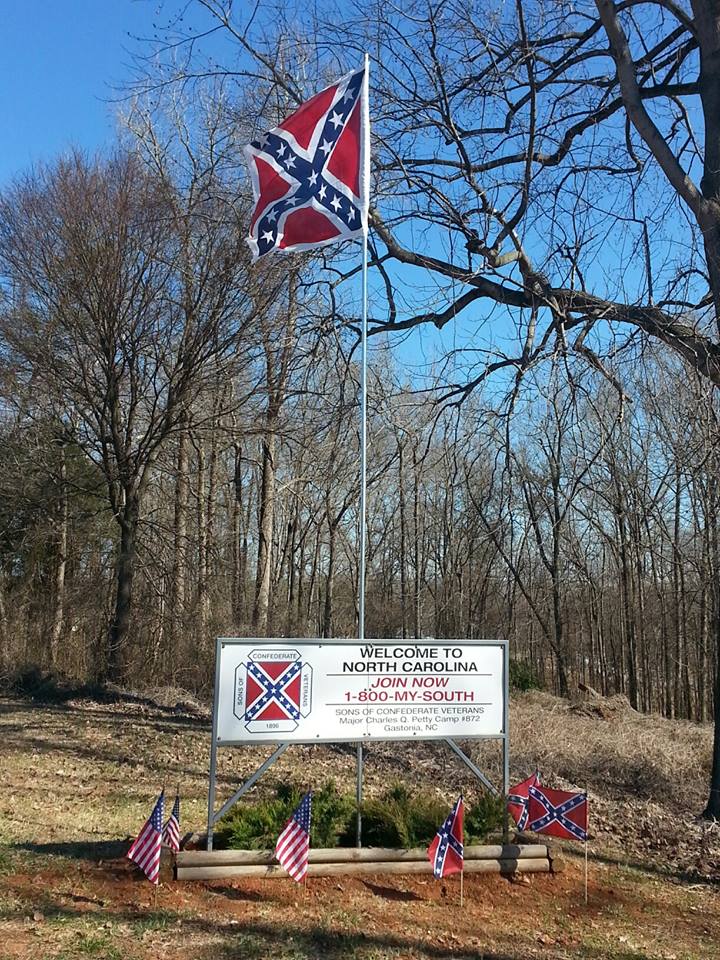 Some of you may recall the news story a few weeks ago, about the SCV Roadside sign that was removed in North Carolina once it was found to be in the DOT Right of Way...

All I have to say is, to whoever raised a stink about it... THANK YOU...not only has the sign been re-installed...there is now a Battle Flag flying, too!

Can your knife light a fire? I’m not talking about a detachable spark rod that you pull from the handle, or the Zippo that you duct taped to the sheath. I’m talking about a built-in feature that actually produces a fire. The newest member of my knife collection is also a fire starter (at least when the sun is shining). It’s the Solar Knife from Solo Scientific.

The folks at Solo Scientific seem to share one of my obsessions: fire building. Having had very favorable results with two of their other products, the Aurora fire starter and the Hot Box fire starter, I was eager to see their latest design: a knife that starts fires by concentrating sunlight.

Las Vegas police said Monday they are hunting for the suspect who shot a mother of four in an apparent road-rage attack while she was teaching her daughter how to drive.

Tammy Meyers died after being taken off life support Saturday night at University Medical Center, family members said at a news conference. She was shot outside her home Thursday.

Detectives are "doing everything they can to find the suspect or suspects,” Las Vegas Metro Police Department spokeswoman Laura Meltzer told ABC News on Monday.

A mum battered and slashed to within an inch of her life by her jealous ex-fiance has been threatened with jail if she refuses to write to him in prison.

Horrified Natalie Allman, 29, has been ordered by a judge to send letters three times a year to brutal Jason Hughes who tortured her for seven hours in front of their twin sons.

Under parental rights laws, Natalie is being forced to send updates on the five-year-olds along with photos.

The boys were just two when they saw their father batter their mum with his weight-lifting dumbbells, slash her throat with an Army knife and try to ­suffocate her with a pillow.

If Natalie refuses to write, she will be held in contempt of court and risks being locked up herself. This article is something of a shootout between my favorite (and cheap at $400) night vision scope and an interesting new digital night vision product that was made from a converted IR CCTV camera.

In my experience, digital night vision normally isn’t worth the inflated pricetag. I’ve even declined to review the couple “clip on” models that I’ve tried because they were just too expensive for what you get. This product, called Digital Crosshairs, is also a clip on that uses your existing scope. But at only $400-$575, it is at least arguably worth the price. As you will see, from a Prepping 101 perspective it isn’t much of a shootout. My $400 Gen I riflescope blows away this new gimmicky nightvision with the LCD screen.

President Obama and the Veterans Administration bureaucracy are already sabotaging the VA reform law passed in August. The ink is barely dry on the 8.6 million "Choice Cards" that supposedly allow vets to see a doctor outside the delay-plagued system.

Obama’s budget tries to snatch the $10 billion allocated for the Choice program and allow it to be spent however VA top administrators want. It’s a sickening betrayal.

Even worse, VA secretary Robert McDonald is telling federal lawmakers that this underhanded move will better serve "VA system priorities." That’s the problem. He’s more interested in protecting "the system" than vets. It’s all about bureaucratic turf and union jobs.

With a straight face, McDonald says it has " nothing to do with us trying to gut the Choice Card or anything like that; it was about flexibility." Flexibility for VA bureaucrats, not for ailing vets who need it. Removing the funding definitely will gut the program because the law says the Choice program expires whenever funding runs out.

At a Feb. 2 press briefing, VA administrators facetiously claimed that sick vets don't want to see outside physicians, and that use of the Choice Cards was "much lower" than they had expected. That’s a whopper. When asked, they couldn’t provide any specifics.

Heroes of Freedom Died in Copenhagen

Via comment by Sioux on Denmark on edge as 2nd shooting within hours rocks...

Dan Uzan died at the gate keeping a Muslim terrorist out of the Jewish Hall behind the Great Synagogue of Copenhagen. In the hall, a young girl was coming of age surrounded by eighty guests.

The gates of the Great Synagogue are more modest than the Gates of Vienna, where the Ottoman Empire was prevented from overrunning Europe, but Dan held them anyway so that a young girl could survive her birthday. And it may be that the hope of our civilization that prevents the world we know from drowning in bloody severed heads and Allahu Akbars begins with one man holding the gate and refusing to let the savage tide through. If not here, then perhaps in another place and another time.

It was not the first time that the savage tide had touched the Great Synagogue.