Two weeks before the French cast their first presidential ballots, the spectre of victory for the far-right leader who promises to crack down on immigration and outlaw gay marriage sends shivers down many a spine. (Shiver away! )


Although they also say the National Front (FN) leader cannot win in the decisive May 7 runoff whoever she faces, a great many pundits were wrong about Brexit and Donald Trump after failing to feel the populist pulse.


And with one in three voters still undecided at this late stage, pollsters would be wise to hedge their bets.

Russian defense ministry beefing up its air defenses in Syria. 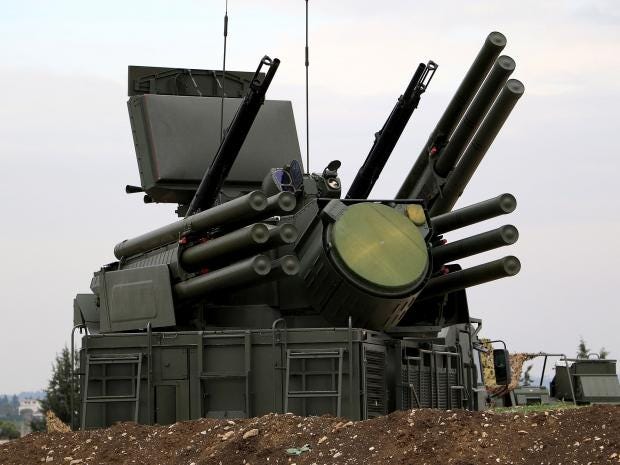 Russian Pantsir-S1 anti-aircraft defence system at the Russian Hmeimim military base in Latakia province, in the northwest of Syria

The US says it has put Bashar al-Assad on notice that it will take further military action if he uses chemical weapons again, while appearing to back away from wider military involvement in the Syrian conflict, less than 24 hours after launching Tomahawk missiles at a regime airbase.

“The United States will no longer wait for Assad to use chemical weapons without any consequences. Those days are over,” the US ambassador to the UN, Nikki Haley, told a special session of the UN security council.

“The United States took a very measured step last night, Haley added. “We are prepared to do more, but we hope that will not be necessary. ”

However, the White House press secretary, Sean Spicer, refused to discuss any next steps – military or diplomatic – as the world struggled to understand Trump’s policy on the civil war.


Syrian warplanes were reported to have taken off from the airbase targeted by the US missiles, suggesting that the military impact of the overnight attack had been minimal.


More @ The Guardian
Posted by Brock Townsend at Saturday, April 08, 2017 No comments:

It seems that every new US president has to prove his machismo…or make his bones, as wiseguys say…by bombing the usual Arabs.  By now, it’s almost a rite of passage.  The American public loves it.

So we just saw the US launch 59 or 60 $1.5million apiece cruise missiles at a western Syrian airfield to express President Trump’s outrage caused by seeing injured children allegedly caused by a Syrian government toxic gas attack.

But what, Mr. President, about all those Iraqi, Syrian and Afghan babies killed by US B-52 and B-1 heavy bombers?  Or the destruction of the defiant Iraqi city of Fallujah where the US used forbidden white phosphorus that burns right to the bone?

Washington claimed its radar had conclusively identified Syrian warplanes dropping chemical weapons.  This sounds to me to be unlikely.  Where was the US radar? Hundreds of miles away aboard ships? Was the info from Israel or Turkey, both with axes to grind?  Is US radar so sharp that it can tell the difference between a chemical and high explosive bomb at great distance?  Sounds highly fishy to me.

War Is A Racket

- Assad is accused of a chemical weapons attack.


It has come to our attention that there has been a development regarding the prosecution (persecution) of journalist Gary Hunt. This past January, the documented use of lawfare was proven through judicial transparency thanks to the release of court documents. These documents show that United States Attorney Pamala Holsinger tried to convince Judge Anna Brown that Hunt was in possession of what she considered to be contraband, which was actually discovery evidence. Since then, Hunt has been visited by FBI Special Agent Matthew Catalano multiple times, as documented in his Freedom of the Press article series. During these face-to-face meetings, Agent Catalano and Hunt enjoyed polite discussions as Hunt refused service of the court order demanding his appearance in the federal Oregon District Court. Hunt explained to Agent Catalano that he did not think this order applies to him.

The latest development is that as of today on March 30th of 2017, at approximately 12:30 pm PST, Gary Hunt was arrested by federal marshals at his home in Los Molinos, California. He was reported to have been transported to Sacramento, yet his extradition to Oregon is still under question.

According to the Sealed Order Granting Government’s Request for Arrest Warrant as to Gary Hunt & Order Sealing Arrest Warrant, which was filed back on March 10th:

Welcome to Virginia! Massive Confederate Flag Flies Again on I-95 in Fredericksburg 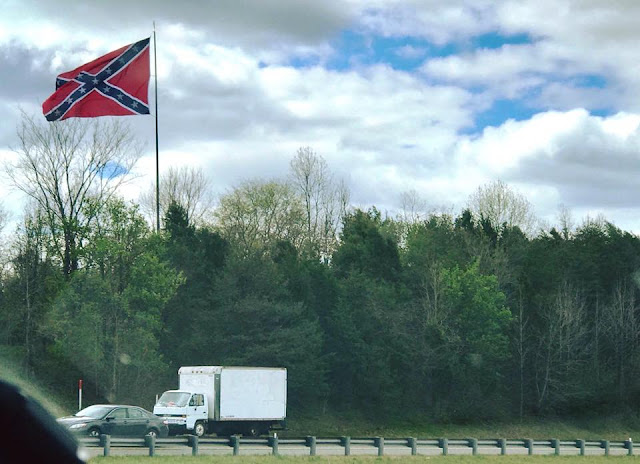 The Virginia Flaggers are pleased to announce that the I-95 Fredericksburg Memorial Battle Flag is flying high once again, with several new improvements.


Last month, the original rope broke and the task of getting a lift back to the site to make repairs turned out to be quite a challenge.  We were finally able to complete the work earlier this week, and a new 20x30 Battle Flag was raised Wednesday evening.

Robert Gore
The Useful and the Useless

T.L. Davis
If There Be Lawlessness

Sen. Rand Paul continued to voice his displeasure Friday after President Trump ordered airstrikes against Syria Thursday night in response to President Bashar Assad's usage of chemical weapons against his own civilians, warning of "unintended consequences."

The Kentucky Republican told reporters in the Capitol Friday morning that the continued decisions to topple regimes in the Middle East and elsewhere, including Saddam Hussein in Iraq and Moammar Gadhafi in Libya, have made things worse in those regions and could ultimately give rise to the Islamic State in Syria if Assad is taken out of power.

"There are often unintended consequences to this. The unintended consequences of toppling Hussein, who was also a despot, who also had gassed his people, was that we made Iran stronger. So the same neocons that wanted to get rid of Hussein now want to get rid of Iran, that they made stronger by getting rid of Hussein," Paul said. "So when they get rid of Assad, which is what all the neocons want, what if the next people that come into power are either ISIS or radical Islamic rebels. Would we go after them next? Is there an end to the progression of regime change in the Middle East?"

Doctor For Syrian Chemical Attack is a Jihadist From the U.K.

A doctor associated with the recent alleged chemical attack in Syria was tried in the U.K. as a jihadist. The jihadist doctor was tried for kidnapping journalists as a part of a jihadist group.


More @ The Gateway Pundit
Posted by Brock Townsend at Saturday, April 08, 2017 No comments:

HR 899 Seeks to Abolish the Federal Department of Education


In another straightforward bill that would simply do what it says, Congressman Thomas Massie (R-KY) has introduced HR 899, which would abolish the unconstitutional Department of Education.

Congressman Massie is one of the few congressmen who has stood for the Constitution, even in the face of socialized medicine being pushed by the Speaker of the House and president of his own party.

Massie has introduced the HR899, which would abolish the Federal Department of Education by the end of 2018.  Here is the simple text of the bill.

Agence France-Presse (AFP) quoted a “key figure” in the Army of Islam, or Jaysh al-Islam, as saying, “Hitting one airbase is not enough, there are 26 airbases that target civilians.” The AFP article just identified Jaysh al-Islam as a rebel group and didn’t point out that the organization seeks to replace the Assad regime with a government ruled by Sharia law.


More than 30 lawmakers sent a letter to President Trump on Thursday in a renewed call for IRS Commissioner John Koskinen to step down from his post before the end of his term.

“So long as the IRS commissioner is a man who has misled the people, destroyed evidence, and failed his legal duties to the people’s representatives on Congress, the IRS is not ‘controlled by the people’,” the letter reads. “For that reason, we request you immediately remove Koskinen.

Laura Ingraham, the media mogul who was among the first to jump on the Trump train, is urging the president to stick to his "America First" agenda and resist temptations to follow a "conventional Bush-style Republican approach" on the economy and foreign policy.

In announcing a new book about Trump's populist movement and election on a day when the administration is defending its surprise cruise missile attack on Syria and facing reports that centrist Wall Street Republicans have gained power in the West Wing, she told Secrets

Senator Rand Paul on Airstrikes in Syria: "The United States was not Attacked"


On Thursday evening, following the launch of more than 50 Tomahawk cruise missiles on a Syrian air base, Senator Rand Paul (R-KY) said that the united States was not attacked, and called on President Donald Trump to follow the Constitution and come before Congress for a declaration of war.

“While we all condemn the atrocities in Syria, the United States was not attacked," Paul said.  " The President needs congressional authorization for military action as required by the Constitution, and I call on him to come to Congress for a proper debate."

“Our prior interventions in this region have done nothing to make us safer and Syria will be no different,” he added.

When Senator Paul was asked, "Do you think we should do what Senator McCain said and make this thing a no fly zone? And if they try to fly, bomb out their runways?" 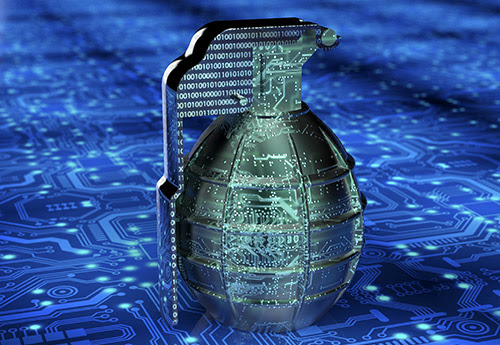 A 58-year-old American man has been charged with mischief after officials found a mock improvised explosive device inside his suitcase at Toronto’s main airport, police said Thursday.

Peel Regional Police Constable Harinder Sohi said it’s “not terrorist related.” Police identified the man as Joseph Galaska, but they didn’t identify where he’s from in the U.S.

Constable Mark Fischer said officials “are investigating the possible motivation behind the incident, such as a trial run,” but Fischer said the man’s age makes him believe that is not the case.