These capitalists generally act harmoniously and in concert, to fleece the people.
—Abraham Lincoln, from his first speech as an Illinois state legislator, 1837

Everyone now is more or less a Socialist.
—Charles Dana, managing editor of the New York Tribune, and Lincoln’s assistant secretary of war, 1848

The workingmen of Europe feel sure that, as the American War of Independence initiated a new era of ascendancy for the middle class, so the American Antislavery War will do for the working classes. They consider it an earnest of the epoch to come that it fell to the lot of Abraham Lincoln, the single-minded son of the working class, to lead his country through the matchless struggle for the rescue of an enchained race and the reconstruction of a social world.
—Karl Marx and the First International Workingmen’s Association to Lincoln, 1864

ON DECEMBER 3, 1861, a former one-term congressman, who had spent most of the past dozen years studying dissident economic theories, mounting challenges to the existing political order and proposing ever more radical responses to the American crisis, delivered his first State of the Union address as the sixteenth president of the United State. 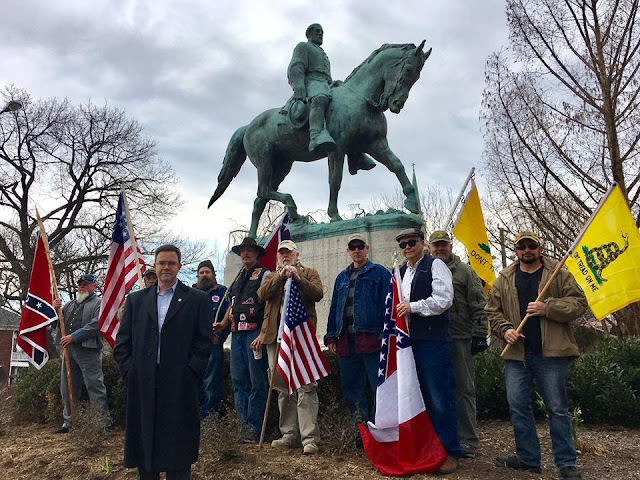 We have received numerous inquiries for updates on the legal proceedings and other plans for Charlottesville after the vote to attempt to remove the RE Lee statue and rename LEE Park.  We have some new information to share with you…

From a legal aspect, we promised Charlottesville that there would be a heavy price to pay and we intend to deliver on that promise.  Our friends at “Friends of C’Ville Monuments” have been busy preparing the first lawsuits, and we expect that they will be filed in the next few days.  In the meantime, our attorney sent a letter to the City Attorney and City Council outlining our plans to follow up with more litigation over the next two months.


More @ The Virginia Flaggers
Posted by Brock Townsend at Wednesday, February 15, 2017 No comments: 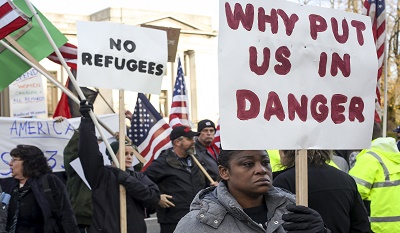 Muslim refugees being transported to their new homes in Germany. The majority of refugees are men with only 18% of them children and about 15% of them women.

While the Democrats and so-called moderate Republicans yell and scream over U.S. President Donald Trump’s efforts to stop the influx of Muslims from seven nations known to be hotbeds of radical Islamic terrorists, Germany’s Chancellor Angela Merkel under intense pressure by the German people is now seeking the deportation of the same refugees she originally welcomed with opened arms.

Merkel announced her 180-degree turn in her nation’s refugee policy and says she will unveil plans this week to increase deportations of immigrants especially those suspected of being involved in anti-West terrorism or materially-supporting radical groups. 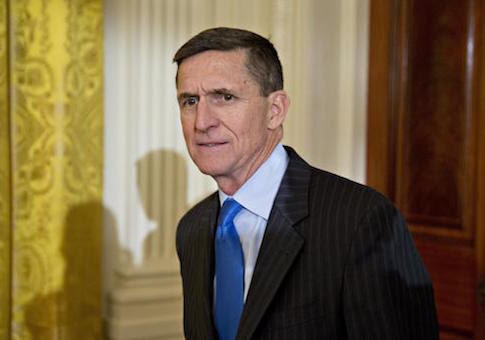 
The abrupt resignation Monday evening of White House national security adviser Michael Flynn is the culmination of a secret, months-long campaign by former Obama administration confidantes to handicap President Donald Trump's national security apparatus and preserve the nuclear deal with Iran, according to multiple sources in and out of the White House who described to the Washington Free Beacon a behind-the-scenes effort by these officials to plant a series of damaging stories about Flynn in the national media.

Federal employees worried that President Donald Trump will gut their agencies are creating new email addresses, signing up for encrypted messaging apps and looking for other, protected ways to push back against the new administration’s agenda.

Whether inside the Environmental Protection Agency, within the Foreign Service, on the edges of the Labor Department or beyond, employees are using new technology as well as more old-fashioned approaches — such as private face-to-face meetings — to organize letters, talk strategy, or contact media outlets and other groups to express their dissent.

The goal is to get their message across while not violating any rules covering workplace communications, which can be monitored by the government and could potentially get them fired. 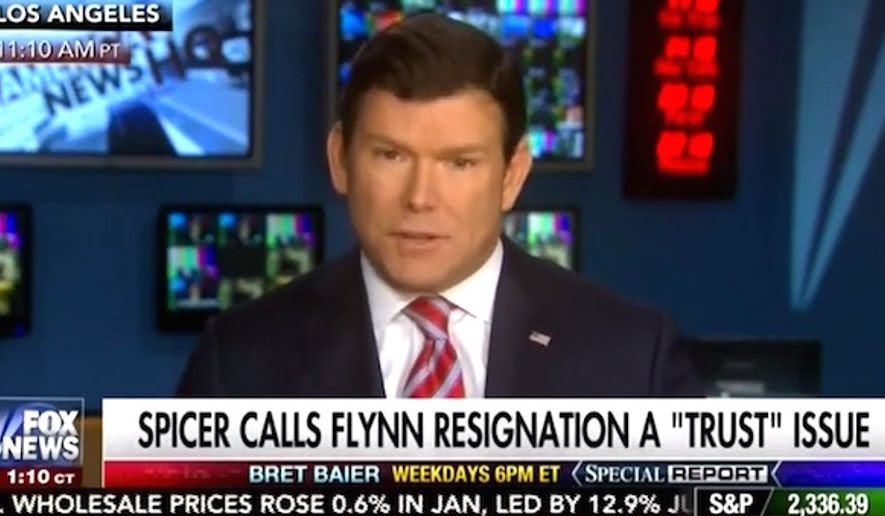 Fox News Channel’s Bret Baier says his sources are worried that an “intelligence industrial complex” in the nation’s capital may be trying to “disqualify” President Trump.

“I think there’s a point there, and there are a number of different people on Capitol Hill and in the administration who I’ve talked about who are concerned that there is, in fact, this intelligence industrial complex that is trying to take out Donald Trump, or somehow discredit him, or get under and disqualify him or some of his officials that are working for him,” Mr. Baier said, Mediaite reported. “It’s a real issue, and it is something that Sean Spicer got to right there in that answer.


More @ The Washington Times
Posted by Brock Townsend at Wednesday, February 15, 2017 No comments:

Many of the behind-the-scenes stories leaked out about President Trump’s White House bear “almost no resemblance to reality,” senior Trump aide Sebastian Gorka says in an interview with The Hill.

Gorka, Trump’s deputy assistant, pushed back forcefully at the idea that stories based on leaks were credible, characterizing them instead as the creations of journalists looking to write negative narratives based on unnamed sources.

“I come in early in the morning at 7 o’clock, open the newspaper, and often I read stories that talk about events where I was in the room the day before ­— decisions being made, policy questions — and the story bears almost no resemblance to reality,” Gorka said.


More with video @ The Hill
Posted by Brock Townsend at Wednesday, February 15, 2017 No comments:


In another round of fake news, the New York Times on Tuesday quoted from a bogus Twitter account purporting to be from Mike Flynn, the general who resigned on Monday night as National Security Adviser. In an article, the Times used a quote from “@GenMikeFlynn” asserting, “But if a scapegoat is what's needed for this Administration to continue to take this great nation forward, I am proud to do my duty.”

This is a fake quote from a fake Twitter account. Appearing on CBS This Morning, Times journalist David Sanger pushed the tweet: “[Flynn] said himself in a Tweet this morning, that while he was responsible, there are others who are responsible, too.”

President Trump took his first step Tuesday in fulfilling a campaign promise to the energy industry by signing a bill that repeals an Obama-era rule requiring fossil fuel companies to report their foreign dealings.

The Senate and House both passed the bill, called a resolution of disapproval, soon after Trump was sworn in as president. The Securities and Exchange Commission finalized the rule last year after a court vacated an earlier version of it.

Trump is expected to sign another bill repealing the Stream Protection Rule in the coming days that directly affects coal miners. Congress used its powers under a law called the Congressional Review Act to repeal the rules.


Health insurer Humana is withdrawing completely from the Obamacare marketplaces in 2018, citing steep financial losses from patients in the individual market.

The company announced the move Tuesday afternoon, becoming the first major insurer to announce its strategy for next year.

Humana covers just a small sliver of Obamacare enrollees — about 150,000 — but its exit bodes poorly for the marketplaces next year as insurers consider whether they can be profitable there.

Insurers are also uncertain about what the marketplaces might look like next year, as congressional Republicans seek to repeal and replace the law but haven't decided exactly how to handle it.

Shaffer says the leaks will lead back to the Barack Obama White House.

Tony Shaffer: I would put this right at the feet of John Brennan and Jim Clapper and I would go so far as to say the Obama White House was directly involved before they left. Ben Rhodes and those folks… The Democrats are behind this and some of the Republicans are involved with the leaks. So I say ‘Bring it on!’

Trump says the ‘real story’ of Flynn’s downfall is ‘illegal leaks’ out of D.C.
Posted by Brock Townsend at Wednesday, February 15, 2017 No comments:

Should CBS and the New York Times have their White House press passes revoked for inciting violence against senior Trump administration officials?

The media is promoting violence against senior Trump advisor Stephen Miller following his interviews last Sunday in which he talked about vote fraud influencing the presidential election.

CBS Television show The Late Show with Stephen Colbert featured a segment that showed Miller about to have his head bashed in with a baseball bat, as a mental patient about to be given electro-shock therapy and with his severed head on a pike.