Norfolk and Portsmouth city leaders have vowed to move their Confederate monuments out of public view.

Around the country, similar emblems have been coming down, too, in places like Baltimore and Dallas.

But in Virginia Beach? It’s unlikely.

City Attorney Mark Stiles issued an opinion that the Confederate monument built more than a century ago outside of the former Princess Anne County Courthouse can’t be moved.

He relied on a 1904 law that says war memorials in counties can’t be disturbed or interfered with. 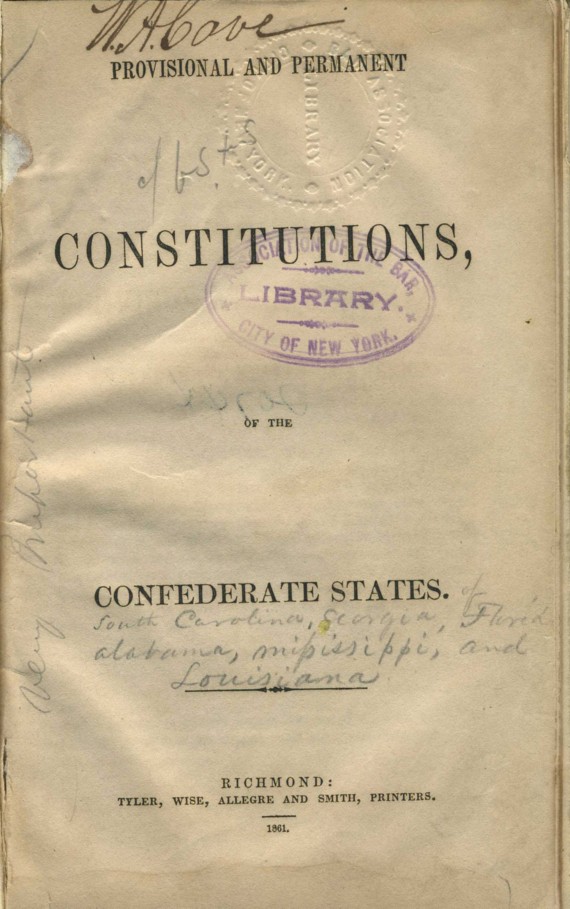 Southern leaders had few complaints with the old Constitution under which they had lived. The heart of the conflict, they felt, was that the intent of the written law had been subverted by Northern sectionalists.

Three major areas of conflict were over *protective tariffs, the settlement of common territories, and the right to be secure in one’s property. Although tariffs enacted to foster industry had received initial approval from the South, Southerners came to be opposed to these measures as overly beneficial to Northern manufacturers and injurious to the agricultural South. The question of settlement and territorial administration was a particularly abrasive issue, as Northern states sought to stop the expansion of slavery into the territories and Southerners insisted on the right of persons to migrate into the territories with their property, including bound laborers. This was related to the third issue—security in property. Specifically, the properties in question were slaves, and Northern Abolitionists had already demonstrated their view on this matter in the halls of Congress, the prairies of Kansas, and Harpers Ferry, Virginia.

I have been buoyed by the support we have gotten from hundreds of people both while making the film Lies of Omission and by those who have purchased it from the website. None of it was ever done to support me as a person, but to support the message that those in the film were trying to bring to those less astute than the average reader of this blog and many others. It is and always has been a tool to help educate those who will not read The Road To Serfdom or anything else that might expand their understanding of the predicament the people of this nation are in. I hope it is, and we tried to make it, something that even the astute can value for the perspectives that it brings forth by the people we interviewed. Many of us have observed, with growing indignation, as the seemingly insane (but actually well-planned and coordinated) campaign to tear down Confederate monuments here in the South proceeds. In fact, it is proceeding so smoothly that you have to recognize none of this is "spontaneous" and it is working like a well-oiled machine--paid for by whose money? Anyone need three guesses? Didn't think so. This has now expanded to where the Hard Left wants to remove all manner of monuments to people, either because they were slave owners or because they were white, or because they treated  "indigenous" peoples badly, or for whatever cockamamie reason they can come up with. I wonder, through this planned insanity, how many statues of Ulysses S. Grant will come down, or maybe there's a monument somewhere to some black person that was a slave owner, and there were blacks that were slave owners you know.

These Hard-core Leftists profess a growing concern for a slavery that ended in this country 150 years ago.  And they want to display their growing concern over this slavery that ended a century and a half ago here by trashing our society, our history, and our culture. Actually what they are really doing is using this now extinct slavery issue as an excuse to practice their favorite form of cultural genocide against white Southerners, because the managed "news" media has let it be known that it's open season on white Southern folks, and you can do whatever you want to them and get by with it. Do this stuff to anyone else and you might wind up with jail time for a "hate" crime, but, hey, these are only white crackers, so you can do what you want to them--and then, if they fight back to defend themselves, they are committing a hate crime.


More @ The Copperhead  Chronicle
Posted by Brock Townsend at Monday, September 18, 2017 No comments:

DACA, DACA, DACA. Now, when I see or hear that acronym DACA, I just start to seethe.

DACA [Deferred Action for Childhood Arrivals] should have been scotched with a forked stick, like a snake on your patio, eight months ago, as Donald Trump promised would be done. Instead we're stuck with the damn thing apparently for ever, the Main Stream Media periodically whipping up their progressive followers into frenzies of compassion over picturesque little kiddies being ripped from the arms of their wailing mothers, hustled into cattle wagons, and shipped off to starvation and misery in Mexico.

First off, as I've pointed out before, DACA recipients have a median age somewhere in the high twenties, and a highest age—given the reliability of public record-keeping in rural Central America—very likely in the mid forties.

Second, there's no danger of starvation. Mexico was ranked ninth fattest country in the world in a report last year. Per capita GDP in Mexico is $19,000: not fantastic, but above the middle of world rankings, better than Brazil or China

Fourth, the propaganda about breaking up families is just that—propaganda, of the shallowest and emptiest kind. Of the many, many people I know who favor enforcing the laws against illegal aliens, not one has any objection to families going back home together. Since Mom and Dad are mostly illegal too, it is in fact what the law requires.

Mike Scruggs comments: The parents of DACA applicants would also be eligible for amnesty under present law. Amnesties are almost impossible to contain within narrow limits and stopping or reversing them once approved would be a few degrees harder than impossible.   Ironically, President Reagan thought he was approving only about 800,000 amnesties in 1986, but the total eventually ran to about 6.0 million. Reagan did realize later that the 1986 Amnesty was his biggest mistake as President.  According to Rep. Steve King of Iowa, that 6+ million kept on growing and by 2008 there were about 15 million new immigrants more inclined to elect Barack Obama President.

Unintentionally, Ronald Reagan made the election of Barack Obama possible. Even a small amnesty in 2017 could finish Trump and the Republican Party, including the hope of passing any conservative legislation or preventing more liberal immigration pretty much forever. My article coming out September 20-21 addresses the extremely high risk of amnesties to just and wise government. If the Durbin-Graham version of Dreamer amnesty passes, 3.7 million initial amnesties, the largest ever, could grow to 23 million through the chain migration. This is based on 1986 and later experience.

Via John "Let's isolate black students and as an encore, let's separate men from women.  What a great "Brave New World" we're now living in!   This is how the last remnants of Rome felt when their once great city was besieged and later sacked by the savage Visigoth's under ruthless King Alaric in 410 AD.  When legalized segregation ended in the mid-1960's, who could have imagined that integration would only last 50 years? Yes, Mr. and Mrs. America, it just keeps getting crazier and crazier......."

University will host dinners as part of ‘racial reconciliation’ program

To promote “racial reconciliation” after the deadly clashes between white nationalists and counterprotesters in Charlottesville last month, Brown University plans to offer segregated events to its black students and female Muslim students.

The university received a $30,000 grant from the Association of American Colleges and Universities, which represents liberal arts schools, to create a campus center whose mission is to “break down racial hierarchies and create a positive narrative about race in the community,” according to The Brown Daily Herald. 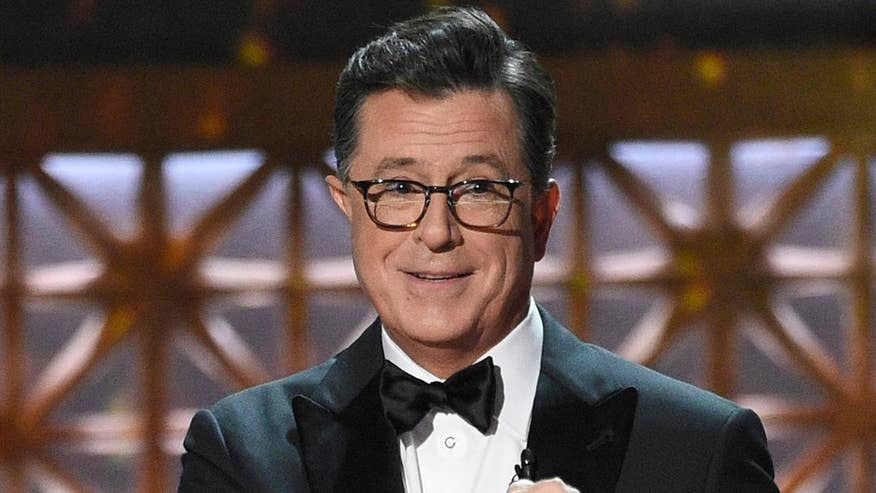 How low can the Emmys go?

It looks like the 69th annual Emmy Awards are heading into sub-basement territory in terms of ratings after host Stephen Colbert spent much of Sunday’s event attacking President Trump.

It turns out American viewers may not have been as into Trump bashing as Hollywood would like them to be, as the 8.2 overnight rating among metered market households is down 2.4 percent from the 2016 edition, which would make it the lowest rated Emmy telecast ever.

The reason it’s hasn't been officially labeled the lowest-rated Emmys yet is because six of the 56 markets are in Florida have not reported, as Hurricane Irma is still holding up the process in areas that were severely impacted by the storm.


Sen. Tom Cotton says President Donald Trump has personally assured him there is no deal between the White House and top Democratic lawmakers on an amnesty for illegal immigrants who arrived in the U.S. as children.

In an interview broadcast Sunday on NBC’s “Meet The Press,” the Arkansas Republican said Trump wants to ensure any agreement to codify the Deferred Action for Childhood Arrivals (DACA) program includes protections for American workers.

“You know, I think the president has said publicly that there’s not a deal, that he wants to see a deal,” Cotton told MTP host Chuck Todd, referring to reports about a possible deal between the White House and Democratic leaders.

What’s the Gun Ownership Rate in Your State?

While we don’t know for certain, it’s estimated that there are roughly 300 million guns in America.

Of course, some say that number is higher…much higher…like upwards of 200 million higher. (No, ifs, ands or buts about it) So who owns all these guns, and where do they live? Injury Prevention, a scholarly journal, decided to find out.

The journal surveyed 4,000 adults across the country to see which states have the highest number of gun owners per capita, also known as the gun ownership rate.

Check to see how your state ranks. You just might be surprised.

Below the national average of 29.1%