A bridge too far.

TrayMom™ Sybrina Fulton and the Scheme Team had a successful fundraising outing on Sunday morning at Baltimore’s Empowerment Temple. The church of the Rockstar Pastor Rev. Jamal Bryant who has been at her side during the coast-to-coast Trayvon Trail Of Tears Tour.

“It’s so easy for me to cry right now but I can’t because I have work to do,” she told the congregation. “I was forced into this position, but I believe God is using me.”

TrayMom appeared wearing a stylish custom made gray cocktail suit with sparkling bling buttons. She said “the support of people like those at Empowerment Temple has helped to keep her going”. Boy is she ever right; the financial support from those who blindly provide their paychecks is definitely keeping her going.

“My heart is filled right now,” she told the church, who gave her a standing ovation and deafening applause and cheers. “Just to see you all, just to see Baltimore.”

You betcha, “hearts filled” and bank accounts swelling as the exploitation Scheme Team Tour plots their next congregations fleecing.

The Real State of the Union 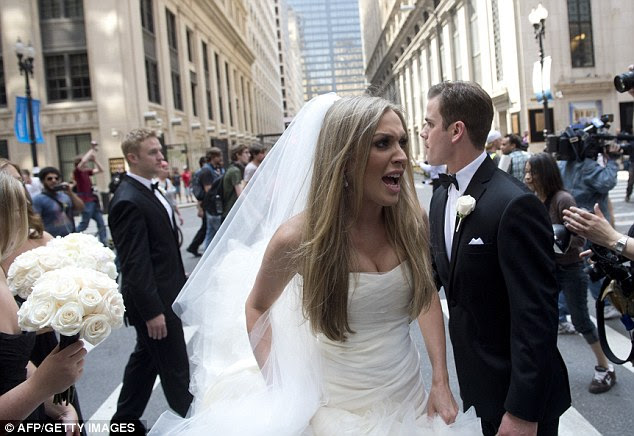 A couple had some unexpected wedding crashers this weekend when their big day was over run by Occupy protesters.

Thousands were expected to march in downtown Chicago today to the lakeside McCormick Place convention center where President Obama and dozens of other world leaders will meet for the Nato summit.

Newlyweds Tim and Beth Alberts left the church in the city centre on Saturday after exchanging their vows and found themselves in the middle of a mass demonstration.

More with video @ Mail Online
Posted by Brock Townsend at Sunday, May 20, 2012 No comments:

N.C. Teacher Tells Student He Could Be Arrested for Talking Badly About Obama

“Didn’t Obama bully somebody, though?”

The teacher started to get angry and said:

“Not to my knowledge.”

A couple of students relayed the story about Obama admitting that he bullied someone when he was younger. And that seemed to light the fuse on his teacher’s anger. A couple of the students exchanged words with the angry teacher.

“Stop! Stop! Because there’s no comparison. He’s running for president. Obama is the president.”

As one student attempted to argue for a fair, two-sided debate on the history of the candidates, he was shouted down and talked over by the teacher. She continued:

“You got to realize, this man is wanting to be what Obama is. There’s no comparison.”

Once again, the students pressed for equal discussion of the histories of both men, with one saying:

The teacher just seemed to dig her heels in deeper and press her defense of Obama telling the defiant teen:

“You will not disrespect the president of the United States in this classroom.”

Again the student persisted and invoked his First Amendment right.

The back and forth continued and the most strident of the two students reminded his teacher that President Bush was constantly treated to negative statements about him while he was in office:

“Whenever Bush was president, everybody talked sh-t about him.”

To which the teacher responded:

“Because he was sh-tty.”

The social studies educator went on for a full minute with more ranting, saying that people were arrested for saying derogatory things about President Bush. The student correctly reminded the teacher that opinions are protected, but you cannot be arrested unless you threaten the president.

Our research has not turned up a single case of anyone in America being arrested for speaking ill of former President Bush. The local newspaper story also mentioned that their discussions about the story with a political science professor could not recall the arrests that the teacher was speaking about.

The entire confrontation was recorded by a student and posted on YouTube. Listen below; slight content warning for language.

Via Battlefield USA
Posted by Brock Townsend at Sunday, May 20, 2012 2 comments:

The following posted comment was from a message board on a site I can no longer find. They were discussing the Trayvon case. However, I remember the author’s name was Joan Forster and she captures the entire systemic issue succinctly:

We now live in a time of effective Racial Temper Tantrums. Facts don’t matter. Like brats in the grocery store with a harried Mom…these Race Pimps scream till a weary nation gives them their way.

It hurts the African-American community to have us speak of the crime statistics involving so many Black youth…so we are silenced by the “SHUT-UP” word: RACIST! too many cannot control their own children so their answer is to demand we tolerate crime and deny the problem.

It’s OUR FAULT for seeing the color of the criminals.

More @ The Last Refuge
Posted by Brock Townsend at Sunday, May 20, 2012 No comments:

North Carolina Declares Independence on May 20, 1861

Sir…I owe no allegiance to any men or set of men on earth, save only to the State of North Carolina, and, so far as she has parted with her sovereignty, to the United States of America.”

North Carolina Secedes From the Union:

The legislature set May 13th as election day for delegates to a State convention that would convene at 11AM on May 20th, the very day when, in 1775, North Carolina revolutionaries had signed the Mecklenburg Declaration of Independence, and declaring themselves a free and independent people. In precipitating war with North Carolina, the Lincoln regime had already begun blockading its coast on 27 April -- an act of war and treason --even before the legislature had convened. This left little to discuss.

On May 20th, 122 delegates filed into the southern wing of the State Capitol to decide whether The Old North State would join 10 other Southern States already out of the old Union. With the galleries crammed with onlookers, the delegates argued the merits of leaving the union or staying a member despite the threatening federal agent.

The April 17th secession of Virginia caused even staunch Unionists in North Carolina to accept the inevitability of a break with Washington, and debate ended at 6PM when by unanimous vote, the convention adopted an Ordinance of Secession penned and presented by Burton Craige of Salisbury at the request of Governor Ellis. Craige was a strong Southern rights advocate as was part of the 1860 Goldsboro convention of the Southern Rights party which called for North Carolina’s secession.

Though rejecting a lengthy document which enumerated the reasons and justifications for North Carolina’s sovereign action, including Lincoln’s unconstitutional and coercive actions against the States, Craige’s ordinance simply repealed the one in 1789 by which the State had voluntarily joined the second union.

“I immediately….called upon the assembled multitude to volunteer not to fight against, but for South Carolina. I said, if war must come, I preferred to be with my own people. if we had to shed blood I preferred to shed Northern rather than Southern blood.

If we had to slay I had rather slay strangers than my own kindred and neighbors; and that it was better, whether right or wrong, that communities and States should get together and face the horrors of war in a body---sharing a common fate, rather than endure unspeakable calamities of internecine strife.”

Immediately after passage of the Ordinance, Major Graham Davee, private secretary to Governor Ellis, threw open a window on the west side of the building and related the news to Ellis Artillery Captain Stephen Dodson Ramseur. One hundred cadenced discharges marked the occasion of North Carolina reclaiming her independence; and this was followed by a ten gun salute to the other independent States. Within a short time it was announced that the convention had adopted the Constitution of the Confederate States, whereupon a twenty-gun salute was commenced.

May 20th was a much-revered date in North Carolina---Ada Amelia’s Diary entry of Tuesday, May 21st, 1861 mentions that “the centenary celebration is near at hand.

It is likely to be hereafter marked by a still more solemn and important event in the history of the State. It will be known, we trust, as the anniversary not only of the first, but of the second and crowning declaration and act of independence for the old State.”

More @ North Carolina War Between the States Sesquicentennial
Posted by Brock Townsend at Sunday, May 20, 2012 No comments:

So the Hoosier Terror festival is complete.
A pleasant time was had by all.
About a dozen total in attendance (by some who traveled great distances), graciously hosted and much appreciated, in a remote and secure area.
It is sufficient to say that I pity the fool who tries to infiltrate this particular compound.

Weaponry: History of the Caltrop
Posted by Brock Townsend at Sunday, May 20, 2012 3 comments:

Via The Last Refuge

Websites of the “antifa” gang, a violent Marxist/”Anti-Racist” network, is claiming responsibility for an armed attacked on a Chicago restaurant. A meeting was occurring at the restaurant called the “White Nationalist Economic Summit.” The participates of the meeting apparently organized it on the internet forum stormfront.org. At least one of the victims was not a participant in the meeting. The manager of the restaurant was among the injured.

“Antifa” is a network of violent Marxist gangs that advocate the use of violence to silence people they disagree with. Anyone to the right of Morris Dees is a potential target for their violence. “Antifa” groups has committed violence against people who demonstrate at abortion clinics as well. “Antifa” websites identify the local Chicago gang as “South Side Chicago Anti-Racist Action.”

The group has a history of violence in Chicago. Recently Chicago members posted pictures of a young Chicago woman online with her home address and work address. Supporters were urged to harass the woman at work. She was identified as the ex-girlfriend of one of their leaders. The harassment campaign was apparently retaliation for dumping one of their gang leaders.

Police are holding five suspects. Police say up to 20 people were involved in the attack.