I smell blood after today's news and especially what Wikileaks is supposed to reveal on the 1st.

“Every Obama administration official and department involved in the Iran Deal appear to be running for cover,” the source said. “Like we feared, the Iran deal is turning out to be a disaster and Iran is emboldened in its aggression. Evidently Attorney General Lynch and the Department of Justice have decided ‘refusal to cooperate’ is their best strategy.

Attorney General Loretta Lynch is declining to comply with an investigation by leading members of Congress about the Obama administration’s secret efforts to send Iran $1.7 billion in cash earlier this year, prompting accusations that Lynch has “pleaded the Fifth” Amendment to avoid incriminating herself over these payments
Sen. Marco Rubio (R., Fla.) and Rep. Mike Pompeo (R., Kan.) initially presented Lynch in October with a series of questions about how the cash payment to Iran was approved and delivered.

In an Oct. 24 response, Assistant Attorney General Peter Kadzik responded on Lynch’s behalf, refusing to answer the questions and informing the lawmakers that they are barred from publicly disclosing any detail.

Bernstein: FBI Would Not Reopen Case Unless New Evidence Was "A Real Bombshell"

Watergate journalist Carl Bernstein comments on the FBI's shocking Friday afternoon announcement that they are reopening the investigation into Hilary Clinton's email server because new evidence has come to light.


CARL BERNSTEIN: Well, there's no question that the e-mails have always been the greatest threat to her candidacy for president, that her conduct in regard to the e-mails is really indefensible and if there was going to be more information that came out, it was the one thing, as I said on the air last night, actually that could really perhaps affect this election.

Posted by Brock Townsend at Friday, October 28, 2016 No comments: 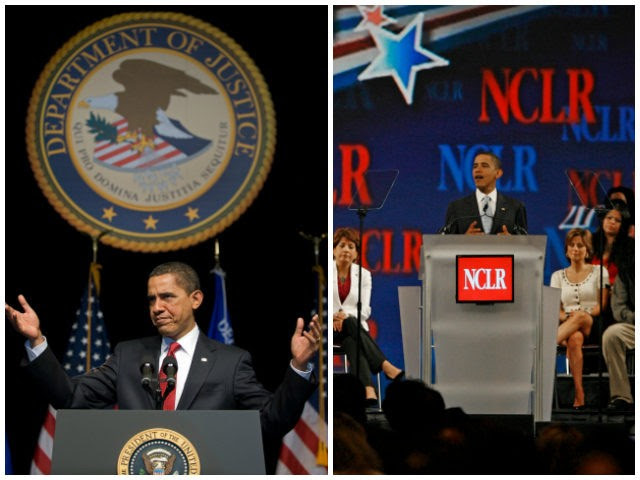 “When I first joined Breitbart,” Schweizer recalled, “There was a scandal called Pigford where the federal government was basically taking taxpayer money and giving it to people who were claiming to be victims who were not victims and giving them billions of dollars. This is in that tradition.”
He explained:


What’s really happening here is simple. You’ve got large financial institutions on Wall Street, you’ve got banks like Bank of America, who have in some cases committed financial crimes. I think some of them are real, some of them may not be, but set that aside for a minute. The Department of Justice has gone after them and basically said, ‘You committed these offenses, you’ve got to pay restitution in the form of billions of dollars.’ Okay, they committed the crime, they ought to pay that.

The problem is the Obama Justice Department has been diverting literally more than $650 million to left-wing groups. They do it under the guise of, “Well, you know, if this bank discriminated against lenders racially, we’re going to give this money to these left-wing quote-unquote housing groups to help deal with the problem.”

But that’s not what’s going on. These housing groups are advocacy groups. They’re left-wing organizations. They are registering voters and getting voters out to the voting booth. And they specifically target what they call quote-unquote progressive voters. 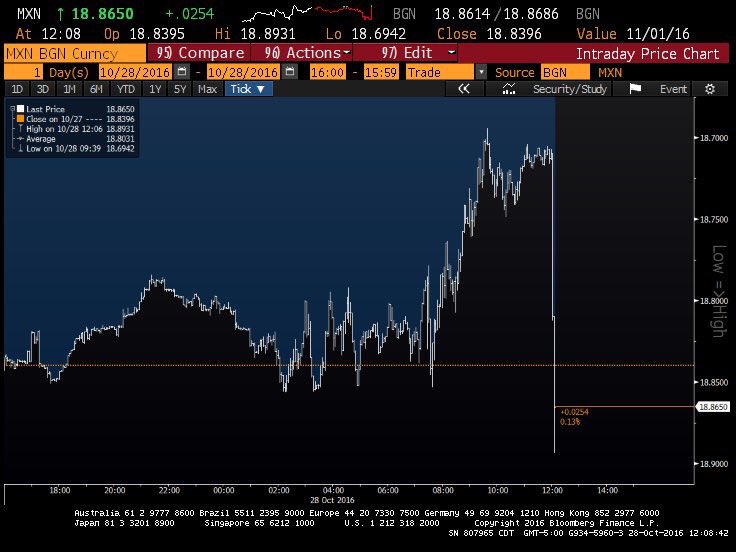 
Last month, the man who's tried to turn vote prediction into a science predicted a Trump win.

Allan J. Lichtman, distinguished professor of history at American University, said Democrats would not be able to hold on to the White House.

FBI Director James Comey moved to reopen the investigation into Hillary Clinton's treatment of classified material after discovering new materials on devices belonging to Huma Abedin, Clinton's former deputy chief of staff, and Anthony Weiner, her soon-to-be ex-husband who is presently the subject of a separate probe into sexually charged messages he allegedly sent to a minor.

This is one way to stop theft by dirty Hillary supporters.

Then watch them come.

More @ The Gateway Pundit
Posted by Brock Townsend at Friday, October 28, 2016 No comments:

Julian Assange: NEXT LEAK Will Lead to Arrest of Hillary Clinton

The last I heard was it would be released on the 1st, so they wouldn't have enough time to replace her.  We can only hope.

MogIA was developed by Sanjiv Rai, founder of Indian start-up Genic.ai. It takes in 20 million data points from public platforms including Google, Facebook, Twitter and YouTube in the U.S. and then analyzes the information to create predictions.

The AI system was created in 2004, so it has been getting smarter all the time. It had already correctly predicted the results of the Democratic and Republican Primaries.

Reporter Is Shocked by the Behavior of Trump Supporters

Blogger goes to Trump Rally, is shocked by what he sees.


The people there were nice, peaceful, and nothing at all like what I expected. …
There were no incidents of violence, no craziness, none of the stuff the media has been reporting on. In fact, it was quite the opposite. The rally was held at the amphitheater, which is a venue for a lot of concerts and big events, and I have *never* seen a crowd so well behaved as this one. Usually people are all up in your personal space, jostling, bumping up against you. There would be spilled drinks, screaming people, dirty looks and occasional fights. Not at the Trump rally.

When the rally ended, everyone filed out in orderly fashion, personal space was respected, there was no jostling, or the usual hostile folks trying to force their way out. For me, the contrast was staggering. All this despite the fact that the amphitheater was packed to the gills, and there was a whole crowd outside the venue.

If the reporter was stunned at how well-behaved and respectful the crowd was, it is probably because he is more accustomed to the behavior of progressive leftists and SJW’s and how they behave at their events.

Black Lives Matter was called into being to protest what the racist hate group claimed was the killings of black men by police.  Activists with the extremist organization have accused law enforcement of genocide. According to a study widely touted by activists, 300 black people were shot by police in 2015.

A Presidency From Hell?

Should Donald Trump surge from behind to win, he would likely bring in with him both houses of Congress.

Much of his agenda — tax cuts, deregulation, border security, deportation of criminals here illegally, repeal of Obamacare, appointing justices like Scalia, unleashing the energy industry — could be readily enacted.

On new trade treaties with China and Mexico, Trump might need economic nationalists in Bernie Sanders’ party to stand with him, as free-trade Republicans stood by their K-Street contributors.

LaPierre: Hillary ‘Dreams of Twisting a Knife into the Heart of the 2A’


NRA Executive Vice President and Chief Executive Officer Wayne LaPierre looks at what eight years of a Barack Obama presidency has done to our once-great nation. And he warns what will happen if Hillary Clinton is elected. "She will launch an all-out war on the Second Amendment," declares LaPierre.

"There is no red line President Hillary Clinton will not cross when it comes to attacking your rights and forcibly taking your guns."LaPierre states the only thing that can stop Clinton is the five million members of the National Rifle Association. History's most committed, most elite defenders of freedom are the special forces that swing elections, he notes. The NRA chief calls for members to stand shoulder-to-shoulder on November 8 and fight for a shared dream that America can—and will—be great again.
Posted by Brock Townsend at Friday, October 28, 2016 No comments: 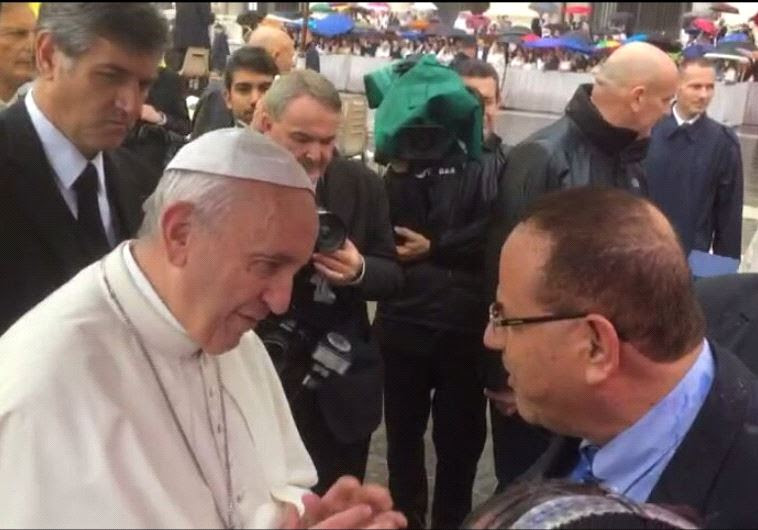 God promised the Holy Land to the people of Israel, Pope Francis said during a public address at the Vatican in Rome on Wednesday in a speech about migration.

“The people of Israel, who from Egypt, where they were enslaved, walked through the desert for forty years until they reached the land promised by God,” he said.

Robert boasted on how he voted for some of his Facebook friends using their identities, and tells them not to worry about voting, because he’s already done it for them.

Robert boasts about how they give you a sticker every time you vote.

He says he will continue to vote all next week!


Moments after the Oregon standoff defendants' acquittals were announced in court Thursday, Ammon Bundy's lawyer Marcus Mumford stood before the judge, and argued that his client should be released from custody immediately and allowed to walk out of the courtroom a free man.

Ammon Bundy, who chose to wear blue jails scrubs throughout the trial, was dressed in a gray suit Thursday.

U.S. District Judge Anna J. Brown told him that there was a U.S. Marshal's hold on him from a pending federal indictment in Nevada.

The 100 Most Damaging WikiLeaks


1. Obama lied: he knew about Hillary’s secret server and wrote to her using a pseudonym, cover-up happened (intent to destroy evidence)
https://wikileaks.org/podesta-emails/emailid/31077#efmAABABT

“Jen you probably have more on this but it looks like POTUS just said he found out HRC was using her personal email when he saw it in the news… we need to clean this up - he has emails from her - they do not say state.gov”

“How is that not classified?” Huma Abedin to FBI when shown email between Clinton & Obama using his pseudonym. Abedin then expressed her amazement at the president’s use of a pseudonym and asked if she could have a copy of the email.”

Posted by Brock Townsend at Friday, October 28, 2016 No comments: