Apparently, we are going to have to deluge Jeff Session's office with demands. Whatever happened to the idea of being able to count on the law enforcement offices to do their job? What level of criminality must be present before the Attorney General will take the steps to hold everyone accountable. The fact is, none of us would have gotten away with what the rich and powerful have gotten away with on television.

Yeah, I know it's been this way for a long time and there is nothing new under the sun, but I had some respect for Jeff Sessions before he became Attorney General and I thought he would be a good AG, because he had always struck me as a law and order guy, no matter which way the blade of justice cut. I don't think that anymore. I have given him time to get his organization in line and start pursuing the obvious criminals standing right in front of him, but he hasn't.

Posted by Brock Townsend at Saturday, September 09, 2017 No comments:

“Nations are the wealth of mankind, its generalized personalities; the least among them has its own unique coloration and harbors within itself a unique facet of God’s design.”
—Alesandr Solzhenitsyn

James Warley Miles was librarian of the College of Charleston in the mid-nineteenth century. He was also an ordained Episcopal priest. Miles had spent some years in the Near and Middle East collecting manuscripts and was said to know thirty languages. A philosophical book of his had been noticed in European universities. He was, in short, a typical product of the notoriously backward culture of the antebellum South.

During the brutal bombardment of the civilians of Charleston, the longest and most deadly any American city has ever experienced, Miles preached a sermon, offering comfort and encouragement to his fellow Southerners in the trials of their war for independence. Reminding them that history is an unfolding of God’s plan, he said: “No people has ever existed wholly without meaning.”

In their efforts to protect victims of sexual assault on college campuses, "progressive" bureaucrats in former President Barack Obama's Department of Education coerced universities into adopting draconian guidelines about sexual assault. These have proved a nightmare for students and administrators, and on Thursday Education Secretary Betsy DeVos began the necessary work of clearing up the mess.

The Obama administration policy and process were both misguided. It would hand down threats in the form of "Dear Colleague" letters to schools, in which educational establishments were given the choice of either adopting the latest fad from the leading edge of sexual politics or losing federal money. In layman's terms, Obama's education henchmen practiced policy extortion with menaces.

The conservative Christian advocacy group Alliance Defending Freedom came under fire from Democratic Sen. Al Franken this week, as ADF's lawyers are preparing to argue a blockbuster religious liberty controversy before the Supreme Court. ADF will represent a Colorado baker whose refusal to design and make a cake celebrating a same-sex marriage is one of the coming term's highest profile cases, Masterpiece Cakeshop, Ltd. v. Colorado Civil Rights Commission.

During Senate Judiciary Committee hearings this week on Notre Dame law professor Amy Coney Barrett's nomination to the 7th Circuit Court of Appeals, Franken said Barrett's decision to speak to ADF was irresponsible. The Minnesota Democrat said ADF is "a group that fights against equal treatment of LGBT people" whose "real purpose is to advance an extreme version or vision of society."

Kristen Waggoner, an ADF attorney on the Masterpiece case, called Franken's remarks "shameful" and said the American people "should expect more from our senators."

Back in May, the House of Representatives passed a $1.6 billion appropriation to fund President Trump's promised Mexican border wall. Now, what seems like several dog years later, final funding for the wall became a political pawn after Trump threatened to veto emergency debt-limit legislation unless it is included. There was also talk that funding the wall could become a spoonful of sugar to bring federal relief to hurricane Harvey victims.

But just how serious is the president about building and operating a Mexico-United States barrier? Is he committed to the project, or, as some have wondered, is talking and jockeying about it enough, by itself, to prove to his base that he hasn't forgotten his promise?

Buried deep in a July analysis of the administration's 2018 regulatory budget by George Washington University's Regulatory Studies Center is powerful evidence that Trump is deadly serious about building the wall.

My Childhood: Don Williams, Good Old Boys Like Me, Dead at 78 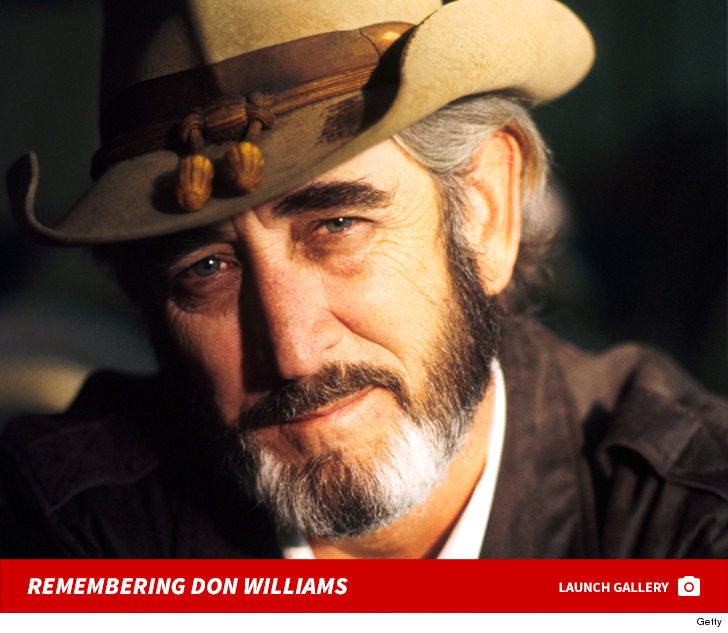 Country singer Don Williams -- a 2010 inductee into the Country Music Hall of Fame -- has died after a short illness ... according to his rep.

The Texas native began his music career in the 1960s, but went solo in 1971. He was known for his smooth voice and imposing stature, which scored him the nickname "Gentle Giant."

Williams had 17 number one country hits ... including "You're My Best Friend" and "Tulsa Time."