Hell has finally froze over!

The United Daughters of the Confederacy National Headquarters in Richmond have become ALLIED with the Virginia Museum of Fine Arts in their OPPOSITION to the RESTORATION of the BATTLEFLAGS on the CONFEDERATE WAR MEMORIAL CHAPEL.

FIRST the UDC HQ has said to USE A BATTLEFLAG is POLITICAL and they would not SUPPORT any efforts that included using a BATTLEFLAG to help the CHAPEL issue because the 501c3 tax status is MORE IMPORTANT than our ANCESTORS!

TODAY the UDC HQ called the Richmond Police to REMOVE the VIRGINIA FLAGGERS who have been successfully Flagging the VMFA to restore the BATTLEFLAGS for the past 6 months AND LIED TO THE OFFICERS to get them to respond!

I was present at the scene as it happened. The GUILTY are UDC President Martha Van Schaick and UDC Secretary of the Board of Trustees Mrs. Lucy Steele.

TOGETHER, the UDC and the VMFA stand PROUD against the CHAPEL, and against our ANCESTORS!
Posted by Brock Townsend at Saturday, March 10, 2012 No comments:

"Well, Govan, if we must die, let us die like men."Gen. Patrick R. Cleburne 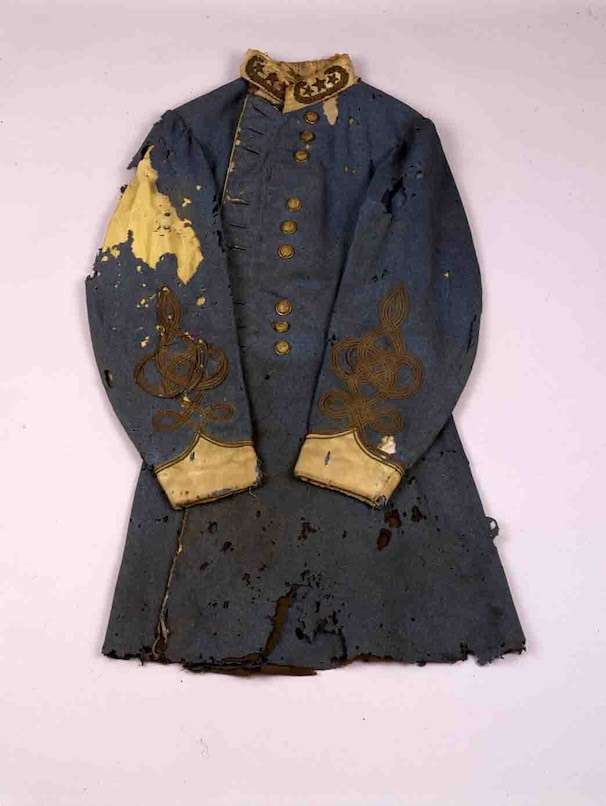 This is the coat that the Stonewall of the West, was wearing when he was killed while attacking the Union breastworks at the Battle of Franklin , Nov. 30, 1864.

While the Labor Department reports a surge in private-sector hiring and the nation's unemployment rate holding steady at 8.3 percent, a closer look at the numbers paints a less flattering picture of the country's post-recession growth.

The latest report for February shows lingering economic disparities among different segments of the population. And, as has been the case for decades, the unemployment rate used by the Bureau of Labor Statistics does not tell the whole story.

Counting only those Americans who are actively looking for work, the jobless rate is 8.3 percent, just like it was in January. But counting those who stopped looking for work within the last year, the rate is 9.8 percent.

And counting all of the above, plus those who settled for part-time jobs, the rate is 14.9 percent.

The Death of Poor Joe, which dates back to March 1901, was discovered by British Film Institute (BFI) curator Bryony Dixon, in February.

Until now the earliest known Dickens film was Scrooge or Marley's Ghost, released in November 1901.

"It's wonderful to have discovered such a rare and unique film," Ms Dixon said.

"It looks beautiful and is in excellent condition. This really is the icing on the cake of our current celebration of Dickens on Screen."

The Death of Poor Joe will be screened as part of the Dickens bicentennial celebrations on 9 March and 23 March at London's BFI Southbank.

The film organisation said it is also planning to release the footage on a DVD at a later date.

A trial for Ms. Fluke?

I would love to see this go to trial. Ms. Fluke would have to testify as to her sexual history. In doing so, it might confirm the very things Rush said about her. Witnesses would be called to testify. While I don’t know how many sexual partners Ms. Fluke has had, but just to ask the questions would prove much more embarrassing to her.

Then the issue of the liberal double standard would be brought out. There’s so much of evidence of this that we might see liberal talkers brought to trial as well. We might even see some politicians face the judge. It would be heaven. You know Rush Limbaugh would have the best high-profile lawyers defending him. It would be Oliver North and Iran-Contra all over again. The best in free entertainment.

Liberals are trying to get around the double standard accusation by claiming that the conservative women who were verbally attacked with sexual barbs were “public figures.” As soon as Ms. Fluke agreed to speak out publicly on the birth control issue, she became a public figure. She has since appeared on a number of radio and television shows.

No Paul = No Vote in November

Finally, we then wait at the convention for the personal phone call from Mitt Romney following private preliminary discussions where Rand Paul is asked to be the Vice Presidential candidate on a Romney/Paul ticket after assurances Ron Paul will be nominated for an appropriate cabinet level appointment such as Secretary of the Treasury or Defense.

"I would also say of Ron Paul – he doesn't need to win. In his view he is winning already. This is an ideological point he is making. But here's why it's electorally significant – a lot of people, I mean 41 percent in Virginia, only two people on the ballot, still a lot of people voted for Ron Paul. A lot of those voters are portable. They're not Republican – they're not dedicated Republican voters."

It is time for a groundswell of Ron Paul supporters to quietly, respectfully but firmly make their position clear to the mainstream media and the GOP establishment. Simply put, "No Paul on the ticket means no vote for the GOP in November."

The Ron Paul Campaign has the GOP establishment stuck between a rock and a hard place even though they have not won a single state in the primaries to date. Every Paul supporter knows the underhanded tactics used by the Republican leadership at the state and national level as well as the organized smear and news blackout campaign carried out by the mainstream media.

Making Nice For the November Election

Last night a Faux News headline blurted out that Senator John McCain wants "us" to bomb Syria. This is news? Come on, Faux, REAL news would be an interview with John "Dr. Strangelove" McCain in which he is asked, "Whom should we bomb next?" and he answers: "Well, no one that I can think of for now."

The rationale the neocons give for going on endless invading, bombing, murdering, destroying, and occupying binges is that the governments of the targeted countries are oppressive and are even killing some of their own citizens. In his book, Power Kills, R. J. Rummel writes that "democidal" regimes that murder their own citizens become more vicious when their political power is "conjoined with an absolutist ideology" and that war provides "an excuse and cover for a regime to eliminate those social groups it finds objectionable" (p. 93).

Rummel estimated the millions killed by their own governments in the U.S.S.R, China, Vietnam, North Korea, Cambodia, Eastern Europe, and elsewhere. But he left out one important country, one in which the government killed some 350,000 of its own citizens for resisting its "authority" while maiming for life more than double that number. I speak of course of the U.S. government during the Lincoln regime, which did all of this in the name of "American exceptionalism." They were right, this was an "exceptional" act of barbarism at a time when the population of the U.S. was one-tenth of what it is today. Standardizing for today's population, this would be the equivalent of 3.5 million deaths. If Rummel were to include this particular act of "democide' it would rank the Lincoln regime slightly above Pol Pot's Cambodia.

The Obama administration simulated a cyber attack on New York City's power supply in a Senate demonstration aimed at winning support for legislation to boost the nation's computer defenses. Senators from both parties gathered behind closed doors in the Capitol Wednesday for the classified briefing attended by Homeland Security Secretary Janet Napolitano, FBI Director Robert Mueller and other administration officials. The mock attack on the city during a summer heat wave was "very compelling," said Sen. Susan Collins, R-Maine, who is co-sponsoring a cybersecurity bill supported by President Barack Obama. "It illustrated the problem and why legislation is desperately needed," she said as she left the briefing. Bloomberg.

The US defense industry is in a full court press to get tens of billions in funding for cyberwarfare.

To get that funding, they need to dramatize the potential threat of cyberwarfare. Here's how. The central method of attack in cyberwarfare is systems disruption. Systems disruption is a way to break networks to achieve extremely high levels of damage (or, in financial terms, high ROIs). One of the best ways to demonstrate that type of attack is through a disruption of the power supply (usually with NYC as a target).

The problem with this type of presentation is that you don't need cyberwarfare to do take down the electricity to New York City and get away with it.

MORE
Posted by Brock Townsend at Saturday, March 10, 2012 No comments:

It’s a twist of irony: The Russian news website Pravda has published an accusation that the American media is “tame,” afraid to publish news and is “deliberately hiding the evidence published on the internet about [President Obama's] defrauding of the American public and the deliberate evisceration of the Constitution of the United States.”

“A singularly remarkable event has taken place in the United States of America,” Cotter wrote. “This event occurred in Arizona on March 1st and was an earth shattering revelation. … Yet, in the five days since [Arpaio's] revelations there has been little in the way of serious reporting on the findings he presented in his presser. With 6 short videos, the Sheriff and his team presented a devastating case, one the tame US press is apparently unable to report.”

Cotter recalls Obama April 27, 2011, press conference in which he “walked into the White House Press room with a Cheshire cat like grin and a ‘Long Form Birth Certificate’ from the State of Hawaii in hand.”

Speaking from the podium, Obama declared, “We’re not going to be able to solve our problems if we get distracted by sideshows and carnival barkers.”

“Quite the barb from a man holding a forged document,” Cotter wrote. “That’s right, forged.

The Congressional Budget Office says that the government provided $24 billion of tax credits and direct subsidies to the energy industry in 2011. Here’s how it was divided up:

So, the industry that receives about 10 cents of each dollar of incentives the government provides produces 85% of all the energy to keep America going. And, yet it is the industry that Barack Obama demonizes and wants to punish with higher taxes. 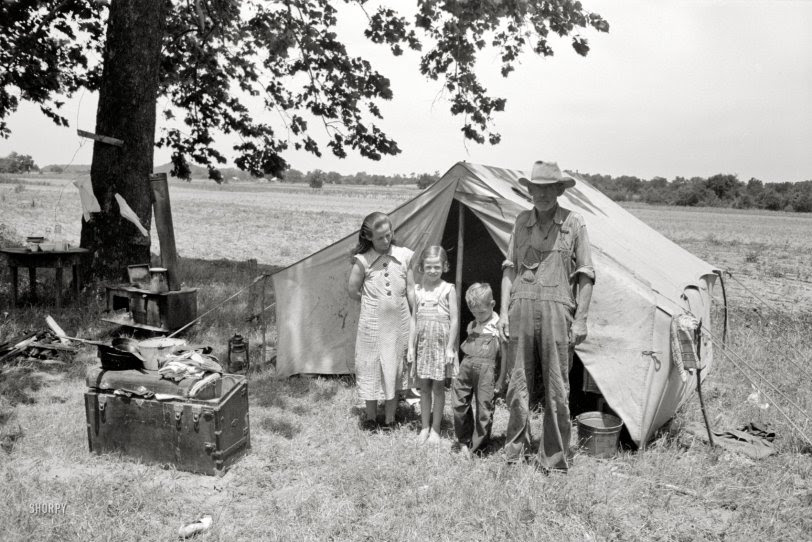 He has followed the road for about 30 years. When asked where his home was he said, 'It's all over.'"
HERE

An America with no middle class: Top two jobs for the next decade will pay roughly $20,000 a year. 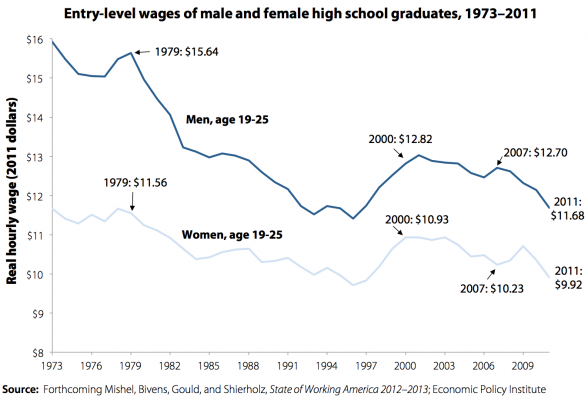 A strong middle class has been at the core of what has been promoted as the American Dream. How would America look like if the middle class simply vanished? We may not need to wait too long at the current rate since we are quickly siphoning people off the middle class and throwing them into lower income brackets. The vast majority of Americans do not buy into the propaganda promoted on the tightly controlled media outlets.