A showdown is developing between a sizable number of Connecticut state police officers and the politicians who passed into law highly restrictive gun control, gun bans, and bans on high capacity magazines.

Gun rights legal expert and activist David Hardy reported Friday that 250 law enforcement officers in Connecticut have signed an open letter stating that they will not enforce the new anti-gun and magazine laws, which they consider to be a violation of the Second Amendment to the U.S. Constitution.

A major news story on these developments is due to be published soon, but Hardy received an advanced notice via email from Tyler Jackson, the head of the Connecticut Peace Officers Association, the organization that sent the open letter.

Somehow, when it is the agreements the U.S. Government officials are counting on, words are important, they have definitions and purpose. It is amusing to watch them invoke every argument of the Constitutionalists to justify whatever actions they might have to take in the Ukrainian crisis.

Is Hillary Clinton talking about the issue of gun confiscation in Connecticut?

“Now if this sounds familiar, it’s what Hitler did back in the 30s,” Clinton said.

No, she was talking about Russia using Russian citizens in Crimea as an excuse to enter the territory, but the rhetoric the leftists use sound eerily familiar to that used by Constitutionalists to put their point across. When American citizens invoke this rhetoric, however, the government(s) have a way of dismissing it.

Looks like it went down right off the coast of Phu Quoc which is famous for the best Nuoc Mam.

The case of the missing Malaysia Airlines MH370 aircraft took on a sinister twist today after reports emerged that two foreigners — one Italian and one Austrian — listed on the flight manifest never boarded the plane.

According to several foreign news reports, Italian Luigi Maraldi and Austrian Christian Kozel, both had their passports stolen some time ago.

The reports appeared to suggest the possibility of foul play onboard the ill-fated Boeing B777-200 aircraft which has now been missing for nearly 24 hours.

We had a large, circular driveway in Marshall, Virginia where I grew up from 5 on which was encompassed by Daffodils in the springtime. A beautiful sight to behold.

I WANDER'D lonely as a cloud

That floats on high o'er vales and hills,
When all at once I saw a crowd,

A host, of golden daffodils;

Beside the lake, beneath the trees,

Fluttering and dancing in the breeze.
Continuous as the stars that shine

And twinkle on the Milky Way,
They stretch'd in never-ending line

Along the margin of a bay:

Ten thousand saw I at a glance,

Tossing their heads in sprightly dance.
The waves beside them danced; but they

Out-did the sparkling waves in glee:
A poet could not but be gay,
In such a jocund company:

I gazed -- and gazed -- but little thought

What wealth the show to me had brought:
For oft, when on my couch I lie

In vacant or in pensive mood,
They flash upon that inward eye

Which is the bliss of solitude;

And then my heart with pleasure fills,

And dances with the daffodils.

CT Cop to Gun Owning Patriot: “I Cannot Wait to Get the Order to Kick Your Door In”


Last weekend, I reported on Connecticut John Cinque's 2013 warning to lawmakers that he would not comply with their attempts to force the citizens of Connecticut to register their semi-automatic weapons and high capacity magazines. Since that time, the video, though a year old, has gone viral.

However, in a recent video between Mr. Cinque and Connecticut gubernatorial candidate Joe Viconti, Cinque reveals that a Branford, Connecticut police officer told him, "I Cannot Wait to Get the Order to Kick Your Door In."

The pastor of a Lansingburgh Baptist church plans to give away an AR-15 assault rifle to the winner of a free raffle at an upcoming Sunday service.

A provocative flier he distributed rallied supporters of gun rights and stirred controversy among anti-gun advocates and some who considered it un-Christian.

Edward Snowden responds to questions from the EU Committee

From a comment at schneier.com
Long but very revealing.

With radical U.S. government and United Nations schemes such as “sustainable development” and UN Agenda 21 being quietly implemented across America at all levels of government under a variety of names and pretexts, lawmakers in the Oklahoma House of Representatives voted overwhelmingly this week for legislation to protect the unalienable rights to private property and due process in the state. The “Oklahoma Community Protection Act,” which would nullify Agenda 21 and other outside assaults on individual rights in the state, now goes to the Oklahoma Senate.


More @ The New American
Posted by Brock Townsend at Saturday, March 08, 2014 No comments:

A new video published to YouTube on March 6, 2014, purports to reveal how a raid on Kiev conducted by British covert operatives was instrumental to sniper incidents that killed a reported 94 people during protests leading to the ouster of Ukrainian president Viktor Yanukovich. “The Maidan Conspiracy: British black ops raid in Kyiv sniper attacks” formulates this conclusion from digital reflections of a wiretapped telephone call between European policy-makers leaked to the Internet on March 5, 2014.

An Open Letter to Lt Vance of the CT State Police

A woman who was arrested last month for feeding wild animals will stay in jail for now after her latest arrest.

A judge decided this morning to hold Mary Musselman, 81, behind bars after she allegedly violated the terms of her probation.

A judge gave her probation at the time, and made it clear: Do it again, and go to jail.


More with video @ My Fox
Posted by Brock Townsend at Saturday, March 08, 2014 No comments:

Here’s the good news about the ObamaCar known as the Chevy Volt: There haven’t been any reported fires connected with the ObamaCar since the company recalled 8,000 of the electric vehicles—that’s one in six vehicles.

That is no fires, if you don’t count the people who’ve been “fired” from the Volt production line as sales continue to make Obama’s “one million” electric car promise just another broken dream in a crooked scheme.

Obama promised that by the time he finished as president, he’d put a million electric cars on the road.
Thankfully, he won’t quite make it.

No telling how much it would cost to put a million on the road after calculating the costs of putting 60,000 on the road. 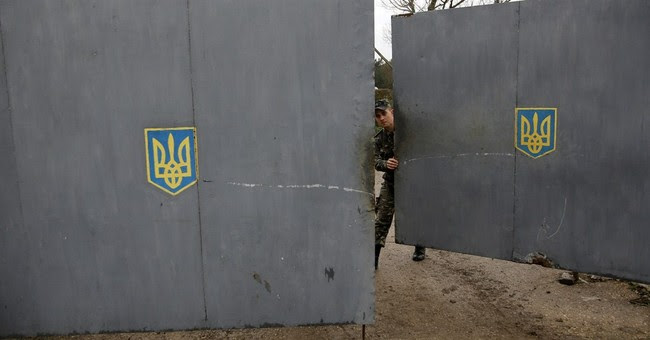 Moscow's foreign minister ruled out any dialogue with Ukraine's new authorities, whom he dismissed as the puppets of extremists.

The Russians have denied their armed forces are active in Crimea, but an Associated Press reporter trailed one military convoy Saturday afternoon from 25 miles (40 kilometers) west of Feodosia to a military airfield at Gvardeiskoe north of Simferopol, over which a Russian flag flew.

Some of the army green vehicles had Russian license plates and numbers indicating that they were from the Moscow region. Some towed mobile kitchens and what appeared to be mobile medical equipment.

Unlike the folks at SPLC, Liberty Alliance is not in the fund raising business. We don't take money from people in the name of phantom fears.

The graphic above indicates how serious the Interior Ministry of the Kingdom of Saudi Arabia has become about dealing with the Muslim Brotherhood and the Kingdom of Qatar. The diplomatic spat between Qatar and Saudi Arabia certainly has become greater as the Saudis fear that the Qatari government might well be playing the Brotherhood against their interests in the Middle East, complicating their ability to expand their relationships with China, Europe, and quite possibly even Israel regarding dealing with their long time enemy, Iran.

The Arab News in Saudi Arabia discusses this action in the following story from the March 8th edition: