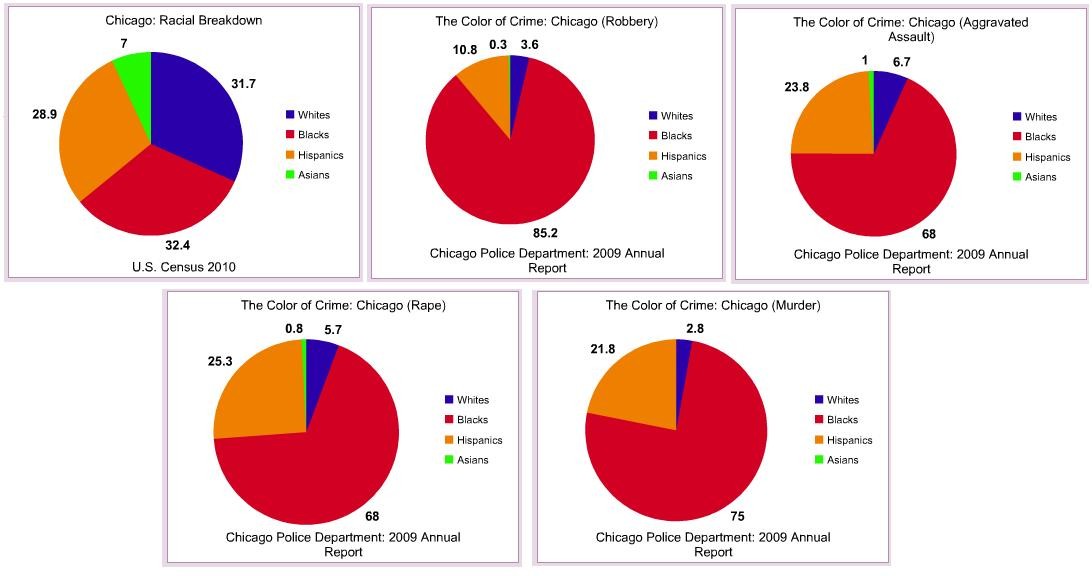 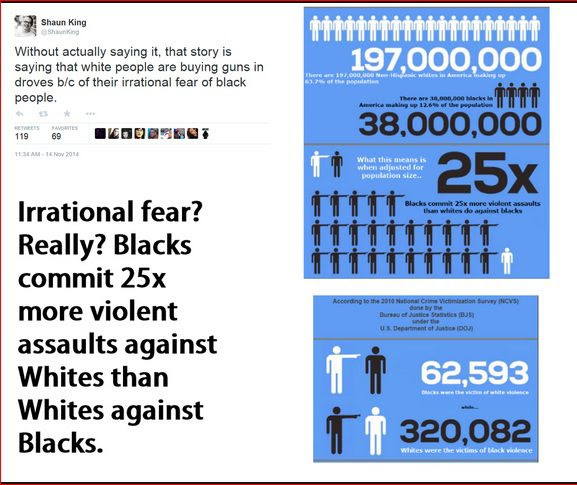 The FBI has just released its supplemental homicide data for 2012, including the numbers of interracial killings. These are highly relevant for the current rallying cry that “black lives matter.”

Unfortunately, the FBI continues its usual practice of combining whites and Hispanics into the single category “white,” thus overstating white crime and victimization rates. Even so, the data are telling.


Posted by Brock Townsend at Saturday, December 13, 2014 8 comments: Links to this post

Heroic Man Purchases Women Who Are Sex Slaves To ISIS, And Sets Them Free

A crime, you think?

He buys them then unites them with their husbands and fathers and family. Here is one example that will touch any human heart. In this story a Yezidi girl who was taken as a sex slave by ISIS. The man acts as a dealer, infiltrates ISIS and purchases the girl and then unites the girl to her father as you see in this scene: (Above)

Convicted terrorist and retired professor Bill Ayers sat down with Fars News, a state-controlled media outlet that serves the Islamic Republic of Iran, where he proclaimed that the United States is a “terrorist nation” that is the “greatest purveyor of violence on earth… and the foremost threat to world peace.”

The current regime in Iran is arguably the foremost purveyor of Islamic terrorism worldwide. Iran has backed countless terror groups, which include Hamas, Hezbollah, and Houthi insurgents, while also providing aid and support to Syrian dictator Bashar al-Assad.

The problem in Ferguson? The Obama administration, the media and activists 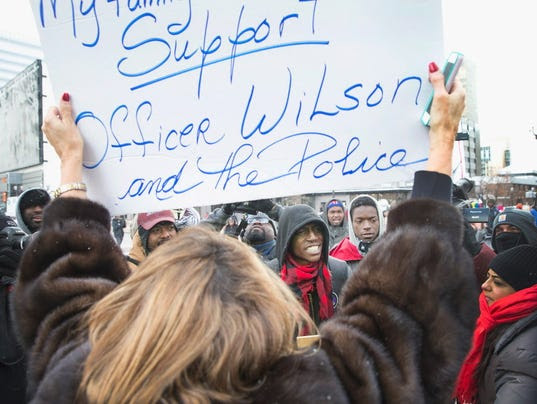 Last week, a New York grand jury declined ​​to indict a police officer who, in efforts to restrain a non-compliant suspect, held him in what many saw as a chokehold. Their announcement came in the wake of public uproar over controversial events nearly 1,000 miles away in Ferguson, Mo.
Americans were fixated on a St. Louis County, Missouri grand jury's decision not to indict a police officer, Darren Wilson, for shooting at an 18-year-old aggressor following a convenience store robbery.

Although the facts of the cases are dramatically different, good people have raised legitimate questions about police tactics and a perceived divide between law enforcement and at-risk communities.

Apparently black people protesting Ferguson believe that one of the ways to stop racism is to have racially-based guidelines for white people so that they know their place, which I dunno, sounds kinda racisty? Here are the guidelines for the white racist oppressor from an attendee of a Boston protest meeting:


More @ The Right Scoop
Posted by Brock Townsend at Saturday, December 13, 2014 12 comments: Links to this post

The cop-killing cult of Larry Davis

In Manhattan's Union Square last week, a protester wielded a menacing sign. It didn't make the front page of any newspaper. You didn't see it on cable news. An appalled bystander sent me a photo of the marcher and his inciteful placard, but didn't want to be identified in any way.

You'll know why in a moment.

"Justice Please," the top line of the poster read. "Before we see a lot of new Larry Davis[es]," the message threatened. "1986 6 cops killed," the banner ended ominously. It was underlined in red marker for bloody emphasis.


More @ The Washington Examiner
Posted by Brock Townsend at Saturday, December 13, 2014 2 comments: Links to this post

Video: "I Will Not Comply" Rally

Posted by Brock Townsend at Saturday, December 13, 2014 4 comments: Links to this post

Posted by Brock Townsend at Saturday, December 13, 2014 No comments: Links to this post

Vic comment "Can this be the future of the US of A with black cops?"by Anonymous on Today I stopped Caring….

“Yesterday we were the targets of a hate-racist attack enroute to Game in Empangeni. A man stood (and blocked) the middle of the road where we had to turn into.

My friend asked him very nicely “where does he want to drive to?” and then we drove past very calmly and parked.

The next moment that black man climbs half-body into our car and beats my friend repeatedly.

He Walked Up With a Shotgun and Told His Target He Was Robbing Him. Then Things Turned Deadly — In a Way the Robber Wasn’t Expecting.

Via Joe "Another happy ending."

The 18-year-old walked up to his target, carrying a sawed-off shotgun and announcing that he was going to rob a 22-year-old man, police said.

Seconds later, the would-be robber had been fatally wounded — with his own weapon.


More with video @ The Blaze
Posted by Brock Townsend at Saturday, December 13, 2014 2 comments: Links to this post 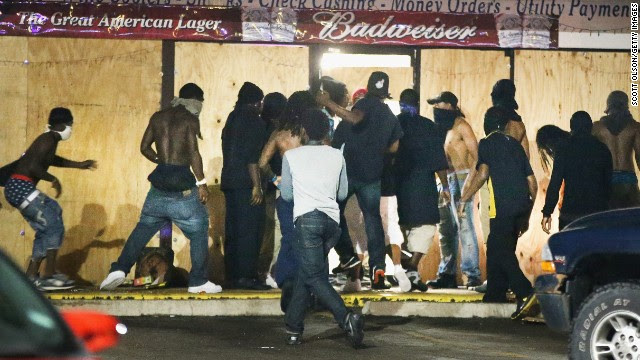 National Review published a profile of the last white mayor of Ferguson, current Mayor James Knowles III. In the piece, it ends with his eternal optimism that commerce will come back to the 67 percent black city of Ferguson, they'll be profitable (and produce tax revenue to support public services), and his belief homeowners will have peace in the city.


“A lot of people talk about the new normal, and I’m not sure we know exactly what that is yet,” he says. “But one thing that I’m confident of is that commerce will return and businesses will get back to a point where they’re having regular customers and being profitable, and that homeowners will be able to have peace in their neighborhoods.”

Oh, there was a time when Ferguson had plenty of commerce, with businesses enjoying regular customers and growing profits, and homeowners enjoyed peace and stability: but this was when Ferguson was 99 percent white (1970); or 86 percent white (1980); or 78 percent white (1990). The existing housing stock is described by the St. Louis Post-Dispatch as, "a picture of pleasant suburbia, with trees lining streets in front of tract houses built during the 1950s and 1960s."

Posted by Brock Townsend at Saturday, December 13, 2014 No comments: Links to this post

A 68-year-old East Lake man opened fire on two home intruders this morning, wounding both men.
The incident happened this morning at a home in the 7800 block of Second Avenue South.

Birmingham police spokesman Lt. Sean Edwards said East Precinct officers were called to the man's home just before 10:30 a.m. on a report of a burglary in progress.

The victim told officers he heard noises in the front of his house and went to investigation. He encountered two men, and fired his handgun at them.

An Atlanta-area gun range has apparently driven gun control cultists nationwide batty after posting plans for an event tomorrow (December 13) that combines posing for pictures with Santa with a food drive for the local food pantry.

What better way to express your holiday spirit, passion for firearms and help support our community than a picture with Santa at the Sandy Springs Gun Club and Range. You will receive one free photo magnet of your picture with Santa and will be able to download your pictures online. This is a free, *non-shooting event; however, we will be accepting donations of non-perishable food items for the Sandy Springs Community Assistance Center.

In this column, I recently argued in favor of a grand jury’s refusal to indict Officer Dan Pantaleo for the death of Eric Garner. To my dismay (and, frankly, shock), a great many “conservatives” and “libertarians,” I’ve had the great misfortune to discover, disagree vehemently with the grand jury’s decision. Some have gone so far as to describe Garner’s death as murder.

Bear in mind, the critics’ knowledge of this case extends no further than a 15 second or so video of the fatal arrest and the fact that Garner was illegally selling cigarettes. That’s it. It is coupled by their belief—one that I share, by the way—that this offense of Garner’s should not be a criminal offense at all. Thus, the police, so goes the reasoning, never should’ve placed him under arrest in the first place.

In a somewhat controversial move, the New York City Fire Department (FDNY) has dropped the physical test requirement for probationary firefighters. The move was done in part to increase the number of female members in FDNY.
From the New York Post:


The Fire Department has stopped requiring probationary firefighters to pass a job-related physical-skills test before getting hired — a move that critics derided as a lowering of standards.

The move by first-year Fire Commissioner Daniel Nigro, which allows probies to fail components of the Functional Skills Training test but still graduate from the Fire Academy, comes amid criticism of the department’s low hiring rate of women.

Concerns about farm attacks in South Africa were among issues presented to the United Nations Human Rights Commission Forum in Geneva, Switzerland

Sunday Times - Freedom Front Plus leader Pieter Mulder said the commission’s theme for the year was “Preventing and addressing violence and atrocities targeted against minorities”.
“It therefore joins up perfectly with the message of the FF Plus about the fate of minorities in South Africa,” he said in a statement. 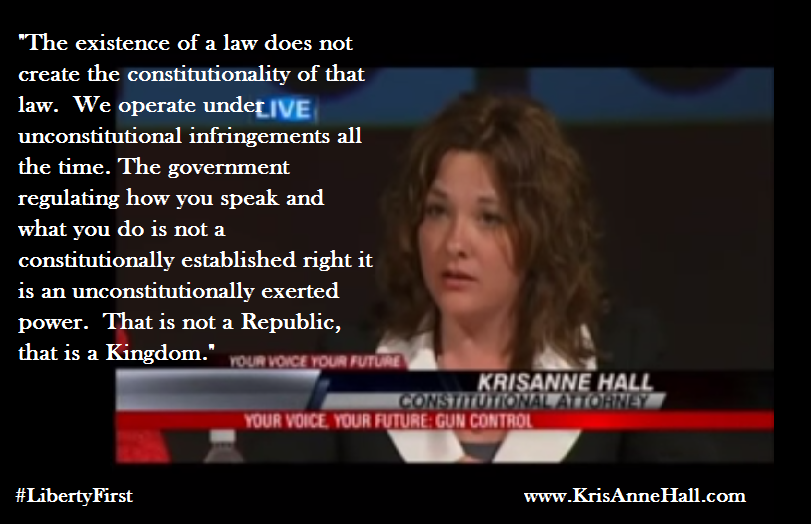 She is scheduled for the 2015 Fall PATCON.

Posted by Brock Townsend at Saturday, December 13, 2014 2 comments: Links to this post