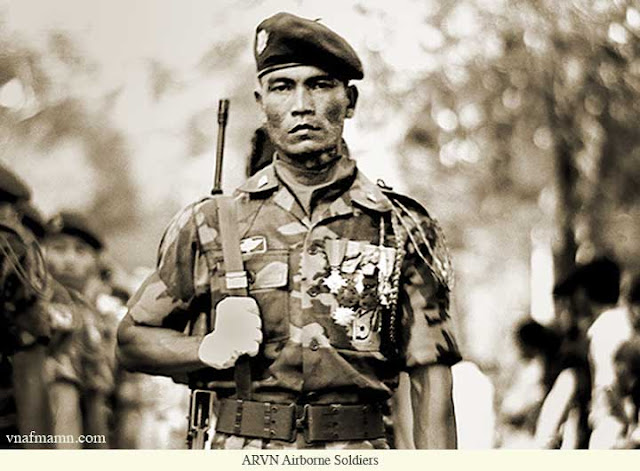 Barry McCaffrey (@mccaffreyr3) served as an adviser in the Vietnamese Airborne Division. He retired as a four-star general.

I arrived in Vietnam in July 1966, and for the next year I served as an adviser with the South Vietnamese Airborne Division. It was the last year we thought we were winning. It was the last year we could define what we thought winning would be. It was a year of optimism, of surging American troop strength that largely took over the war from the Vietnamese — and of wildly expanding American casualty lists.

By the end of 1967, there were 486,000 American troops in the battle. The number of Americans killed in action that year roughly doubled from 1966. Amid all of that, the sacrifice and valor and commitment of the South Vietnamese Army largely disappeared from the American political and media consciousness.

Hurt also said that like the Tea Party in 2010, many of these new Democrats are, "a little rough around the edges."

"You look at some of these Tea Party candidates, they weren't the best candidates... but at the end of the day, they were Constitutionalists like Mike Lee. They might be annoying, but they loved the country."

"These people are communists," Hurt said, about their Democratic counterparts. "And that is a real problem. Democrats are going to have to contend with this, and this is not the last sitting Democrat who is going to be ousted by some socialist who wants free stuff for everybody that comes out of nowhere."
Posted by Brock Townsend at Thursday, September 12, 2019 No comments:

A judge in Charlottesville, Virginia has ruled the controversial statues to Confederate Gen. Robert E. Lee and Gen. Stonewall Jackson must stay.

More than two years after the Feb. 2017 vote by the Charlottesville City Council to remove the statue of Lee, which prompted a lawsuit against the city and was the impetus for what eventually became a deadly white nationalist rally, Circuit Court Judge Richard Moore ruled the memorials can’t be touched.

Posted by Brock Townsend at Thursday, September 12, 2019 No comments: 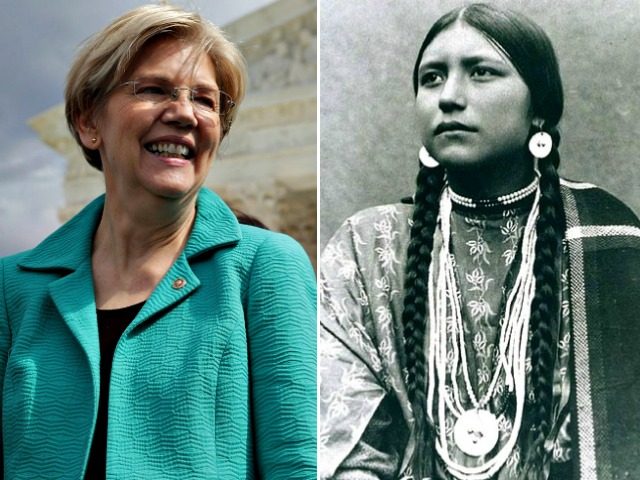 Sen. Elizabeth Warren’s (D-MA) great-great-great grandfather Jonathan Crawford served in Major William Lauderdale’s Battalion of Tennessee Volunteer Militia from November 1837 to May 1838, a six month time period during which it fought two battles in Florida against the Seminoles.

Via Terry "Vote with your wallet - if you use AirBnB, Uber, or Lyft - stop. If you have a Twitter, Pinterest, or Reddit account, delete it. Just yesterday, I got some tickets to an event through EventBrite, little did I know - no more.
If you have jeans or other apparel from Levi Strauss or The Gap, burn them, publicly, and forswear ever buying them again.
This is a list of 145 CEO's who signed a letter to the U.S. Senate clamoring for "red flag" laws and universal background checks. A really enterprising activist with lots of time on his hands would research their Facebook and LinkdIn profiles and, from that, conduct a social network analysis to determine who in your AO is with or against firearm confiscation, and where else to apply your economic leverage. Don't be afraid to write to these clowns, and let them know this will not go unnoticed. Start with your U.S. Senator. Make it a physical, handwritten letter - that gets the most attention and no staffer ever tripped over a bag of email.
Make 'em pay for this BS. I found it interesting that Google, Amazon, Facebook, WalMart, Walgreens, Meijer, Kroger, et al, were conspicuous in their absence."

The letter, which will be delivered today, was signed by companies including Levi Straus, Twitter, Airbnb, Pinterest, Lyft, Gap, DoorDash, Royal Caribbean and more.  Two financial companies are also on the list:  Thrive capital and Bain Capital. 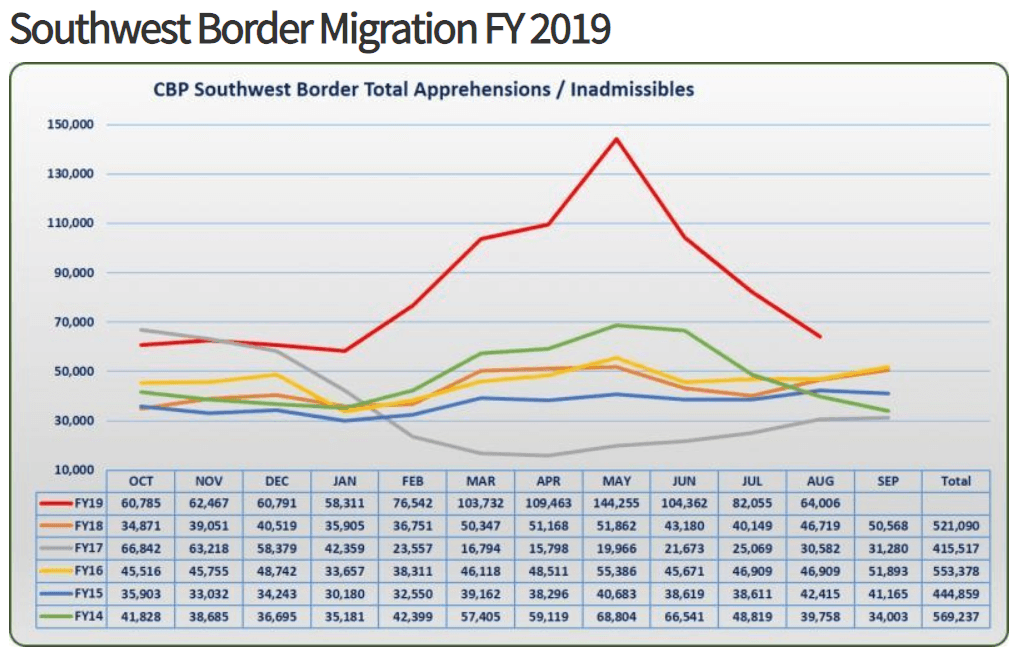 President Donald Trump has won the power to shut down the asylum system, complain pro-migration advocates, ending a process which has been exploited by millions of economic migrants to get blue collar jobs in the United States.

The court’s decision means Trump’s reforms can operate well into 2020, giving voters a clear way to assess the impact of Trump’s 2020 promises.

A blogger couple who traveled from Australia to Asia and the Middle East in an attempt to “break the stigma” surrounding developing countries was reportedly arrested in Iran.

The duo were recently identified as Jolie King and Mark Firkin, the BBC reported on Thursday. Although the couple was arrested 10 weeks ago near Tehran, it wasn’t until Wednesday that the news became known.

In 2017, they planned to leave Australia and drive from Asia to London. Along the way, the pair shared videos documenting the trip with their thousands of followers on social media.


Professor Allen Guelzo has a new video at Prager U “explaining” the “good, bad, and ugly” of Reconstruction. Anyone that has watched a Prager U video knows where this is headed. I laughed through the entire six minutes. Guelzo has a history of South hating rhetoric, and he is a Lincolnian’s Lincolnian. This guy never met a war he didn’t like, an occupation he didn’t see as necessary, or a centralization effort that was not worthy. I take apart his silly little video in this episode of The Brion McClanahan Show. This one was fun to make.
Pick up my McClanahan Academy course on Reconstruction at a 25% discount.
Posted by Brock Townsend at Thursday, September 12, 2019 2 comments:

Rights To Die For 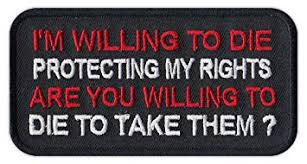 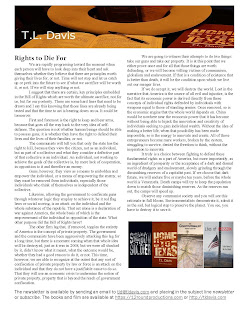 Who Cares What the Government Thinks?

In America, thanks to the First Amendment, no one should hesitate to express any opinion publicly for fear of incurring the wrath of the government. And no government can punish or isolate any person or group because of their exercise of the freedom of speech. Any government officials not faithful to those first principles have violated their oaths to uphold the Constitution and are unworthy of holding public office.

In 1791, when Congressman James Madison was drafting the first 10 amendments to the Constitution -- which would become known as the Bill of Rights -- he insisted that the most prominent amendment among them restrain the government from interfering with the freedom of speech. After various versions of the First Amendment had been drafted and debated, the committee that he chaired settled on the iconic language: "Congress shall make no law ... abridging the freedom of speech."

Madison insisted upon referring to speech as the freedom of speech, not for linguistic or stylistic reasons, but to reflect its pre-political existence. Stated differently, according to Madison -- who drafted the Constitution as well as the Bill of Rights -- because the freedom of speech pre-existed the government, it does not have its origins in government. The use of the article the reflects that pre-existence. 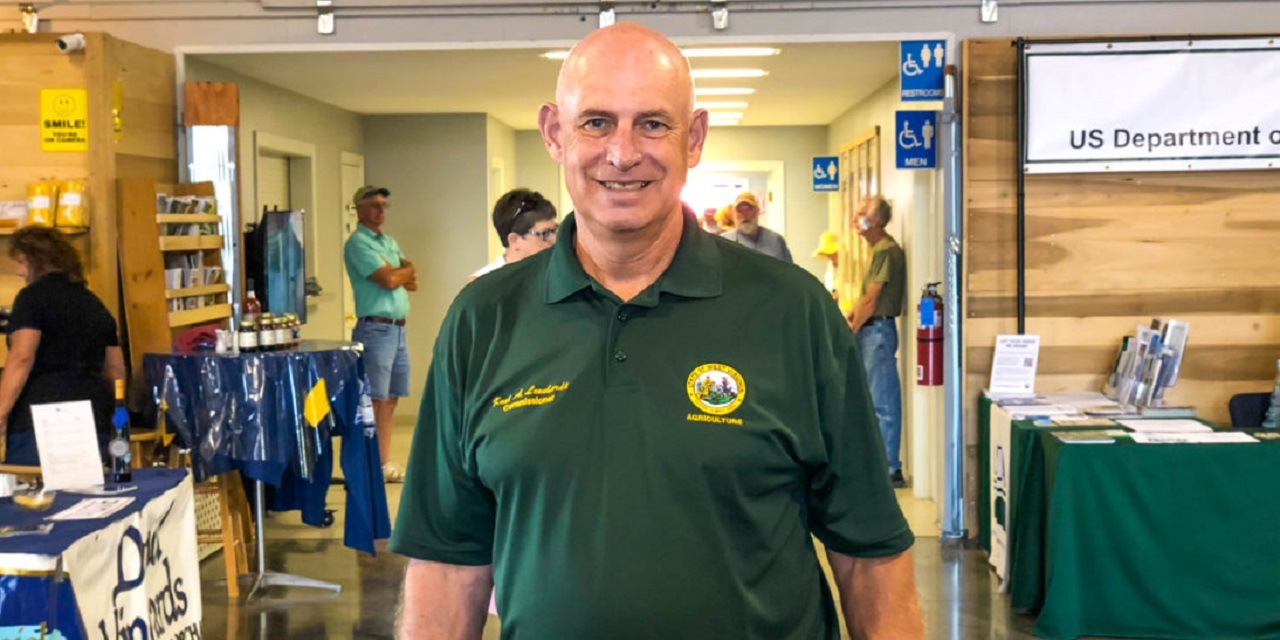 The president’s efforts to level the playing field are a welcome change from administrations’ past and its time Congress shows the same support to our farmers by ratifying the USMCA agreement. We can no longer allow foreign nations to use the American farmer as a trade pawn. The farming community has waited long enough.

In a global economy, trade is king and often the centerpiece of international disagreements between nations.

Because strength is often tied to a nation’s ability to export goods, trade agreements can either bond countries together or act as the catalyst for war. Nowhere is this more evident than in the United States, as capitalism combined with globalization gave rise to the America we know today.

Over the years, these same forces changed our nation’s economy from a manufacturing powerhouse to one more focused on services and technology. 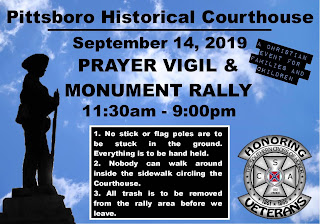 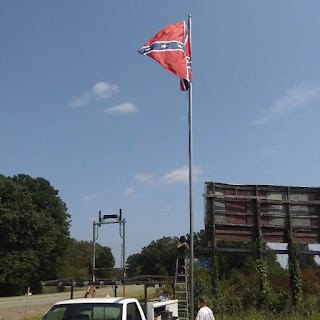 Lee's Surrender, By My Great Grandfather
Pittsboro above.
Info @   The Virginia Flaggers
Posted by Brock Townsend at Thursday, September 12, 2019 No comments: