The Trump-Russia Collusion Hall of Shame

“The news that special counsel Robert S. Mueller III ‘did not find that the Trump campaign, or anyone associated with it, conspired or coordinated with the Russian government’ has left a lot of people in Washington with a lot of explaining to do,” Marc Thiessen writes in The Washington Post.

The worst offenders are those who had access to classified intelligence and lied that they had seen actual evidence of collusion, Thiessen explains. “We have long since passed the point where Americans expect objectivity from the press. But we should hold our elected and appointed officials handling sensitive national security issues to a higher standard.”

“Catherine Toney began February in prison and ended the month with a job at Walmart after White House adviser Jared Kushner called the Arkansas-based retailer on her behalf,” Steven Nelson writes in the Washington Examiner.. “Toney, 55, is believed to be the first woman freed by the FIRST STEP Act, which President Trump signed in December.”

“The Mueller report confirms that the Obama administration, without evidence, turned the surveillance powers of the federal government against the presidential campaign of the party out of power,” James Freeman writes in The Wall Street Journal. “It’s time for Mr. Obama, who oddly receives few mentions in stories about his government’s spying on associates of the 2016 Trump campaign, to say what he knew and did not know about the targeting of his party’s opponents.”

“Support for a southern border wall among conservatives has jumped since President Trump came to office, reaching a new high of 99 percent,” Paul Bedard reports in the Washington Examiner. “The survey . . . found that support for Trump’s border wall has increased 85 percent since he became president.”
Posted by Brock Townsend at Friday, March 29, 2019 No comments: Links to this post

Drew Dix on Bao:"It was a humiliating way for a warrior to go and I often think of him" 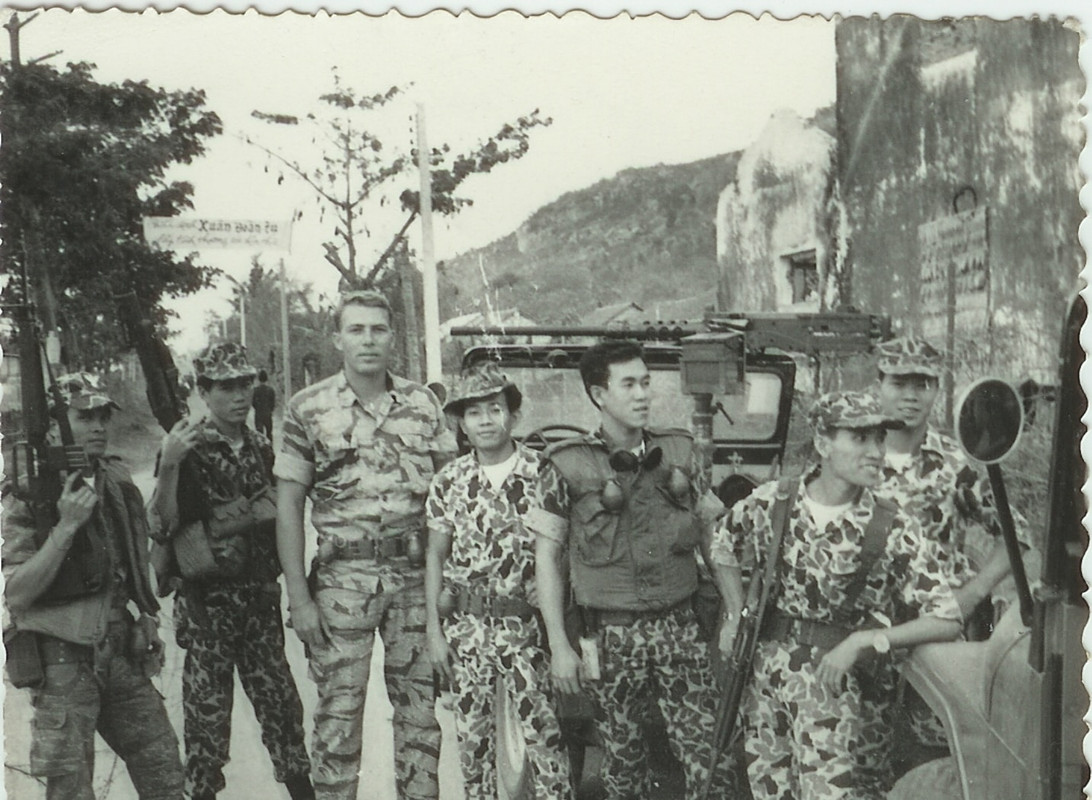 "The Rescue of River City"

I had a picture posted of Bao eating but somehow it got deleted and I can't find it online.  He's sitting at a circular table eating out of a rice bowl (he's the only one in the picture) with chopsticks in case anyone has better luck.  Thanks. A case of beer to anyone who finds it! :)

The book is excellent, but ends with a sad note. One of his warrior's, Bao, went into the hills to continue fighting the Communists after the end. Years later, the Communists told Bao's sister that if he and his men turned themselves in, then they would grant them amnesty. Unfortunately, he believed them, and when he came to Chau Doc to surrender, they immediately took him to the marketplace and promptly executed him. Drew Dix ends his book with the follow words. "It was a humiliating way for a warrior to go and I often think of him"

Story and more at My Friend, NAGO And Drew Dix, CMOH Winner
Posted by Brock Townsend at Friday, March 29, 2019 No comments: Links to this post

Watch as 60,000 Bump Stocks Are Destroyed

This Tuesday marked the launch of a new holiday, “National Destroy Your Bump Stock Day.” To celebrate the occasion, 60,000 bump stocks were crushed by an industrial strength shredder at a recycling facility in Fort Worth, Texas.

The Bureau of Alcohol, Tobacco, Firearms and Explosives (ATF) oversaw the destruction of the reciprocating stocks, which were supplied by Texas-based retailer RW Arms.

Seagram heiress Clare Bronfman had a dramatic day in court Wednesday where the accused NXIVM sex-cult financier fainted in response to being asked if she'd secretly retained lawyer Michael Avenatti.

Mack allegedly procured women for Raniere - who required that prospective "slaves" upload compromising collateral into a Dropbox account. One such recruit-turned-coach was India Oxenberg - daughter of Dynasty actress Catherine Oxenberg, who met with prosecutors in New York in late 2017 to present evidence against Raniere.


More @ Zero Hedge
Posted by Brock Townsend at Friday, March 29, 2019 No comments: Links to this post

A German's View on Islam

Worth reading because this is by far the best explanation of the Muslim terrorist situation I have ever read. His references to past history are accurate and clear. The author of this email is Dr. Emanuel Tanya, a well-known and well-respected psychiatrist--a man, whose family was German aristocracy prior t...o World War II, and owned a number of large industries and estates. When asked how many German people were true Nazis, the answer he gave can guide our attitude toward fanaticism.

'Very few people were true Nazis,' he said, 'but many enjoyed the return of German pride, and many more were too busy to care. I was one of those who just thought the Nazis were a bunch of fools. So, the majority just sat back and let it all happen. Then, before we knew it, they owned us, and we had lost control, and the end of our world had come.

My family lost everything. I ended up in a concentration camp and the Allies destroyed my factories.'
We are told again and again by 'experts' and 'talking heads' that Islam is the religion of peace and that the vast majority of Muslims just want to live in peace. Although this unqualified assertion may be true, it is entirely irrelevant. It is meaningless fluff, meant to make us feel better, and meant to somehow diminish the specter of fanatics rampaging across the globe in the name of Islam.

The hard, quantifiable fact is that the peaceful majority, the 'silent majority,' is cowed and extraneous. Communist Russia was comprised of Russians who just wanted to live in peace, yet the Russian Communists were responsible for the murder of about 20 million people. The peaceful majority were irrelevant.

History lessons are often incredibly simple and blunt. Yet for all our powers of reason, we often miss the most basic and uncomplicated of points: peace-loving Muslims have been made irrelevant by their silence. Peace-loving Muslims will become our enemy if they don't speak up, because like my friend from Germany, they will awaken one day and find that the fanatics own them, and the end of their world will have begun.

Peace-loving Germans, Japanese, Chinese, Russians, Rwandans, Serbs, Afghans, Iraqis, Palestinians, Somalis, Nigerians, Algerians, and many others have died because the peaceful majority did not speak up until it was too late.

Islamic prayers have now been introduced into Toronto and other public schools in Ontario, and, yes, in Ottawa too while the Lord's Prayer was removed (due to being so offensive?! To whom? Not to the vast majority of Canadians!).

The Islamic way is only peaceful until the fanatics move in.

In Australia, and indeed in many countries around the world, many of the most commonly consumed food items have the halal emblem on them. Just look at the back of some of the most popular chocolate bars, and at other food products in your local supermarket. Foods on aircraft have the halal emblem, just to appease the privileged minority who are now rapidly expanding throughout the world.

In the U.K, the Muslim communities refuse to integrate and there are now dozens of ?no-go? zones within major cities across the country that the police force dare not intrude upon. Sharia law prevails there, because the Muslim community in those areas refuses to acknowledge British law.
As for we who watch it all unfold, we must pay attention to the only group that counts -- the fanatics who threaten our way of life.

Anyone who doubts the seriousness of this issue and just deletes this email without sending it on, is contributing to the passiveness that allows the problems to expand.

So, I beg you, extend yourself a bit and send this on and on and on in the hope that thousands, world-wide, read this, think about it, and send it on - before it's too late . . .. because we remained silent
Posted by Brock Townsend at Friday, March 29, 2019 2 comments: Links to this post