Open to the remnants of the original 900+ Americans and Vietnamese who stayed until the end. 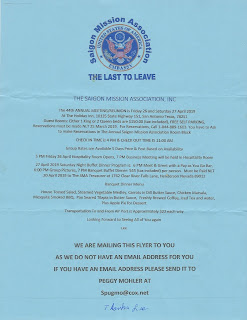 CLICKABLE
Posted by Brock Townsend at Thursday, September 27, 2018 2 comments: Links to this post There is a dichotomy to how people view Jesse James. While some have viewed him as a murdering thief, others have argued that he was like a modern-day Robin Hood. To really understand the man requires an examination of his life and an honest analysis of the events that shaped him in Missouri.

WHO WAS JESSE JAMES?

Jesse James was born in Missouri on September 5, 1847, just seven years before the Kansas-Nebraska act of 1854. His father, Robert James, was a Baptist pastor and died when Jesse was just three years old. Robert was a man of learning and left behind fifty-one books in his will that dealt with math, chemistry, theology, astronomy, grammar, Latin, Greek, public speaking, philosophy, history, literature, and other subjects. By 1850, Robert James outright owned 275 acres of land and had also helped found William Jewell College. The James farm had thirty sheep, six cattle, three horses, a yoke of oxen, and seven slaves. These facts show that Jesse James was not some backwoods yokel lacking a good upbringing, but was fairly well educated knew right from wrong.


More @ The Abbeville Institute
Posted by Brock Townsend at Thursday, September 27, 2018 4 comments: Links to this post

Kavanaugh, Cold Anger and The Reckoning or We’re beyond talking

Right now, through November 6, every day is Saint  Crispian's Day.

They’ve gone too far.  “Donald Trump’s supporters are angry“, or “uneducated”, or “unenlightened”, or (fill_In_The_Blank). This hate-filled sentiment is clear within the latest vile,… nay,… evil and horrific smears directed toward Judge Brett and Ashley Kavanaugh and their cherished children.  Now the media narrative controllers are fully engaged along with their political brethren.  Do not look away.

The vulgar lies and filth are now extreme as the ideological entities utilize their microphones in a brutal attempt to tear down the Kavanaugh family.

As we bear witness, anyone trying to convince us this entire assembly of our union is headed in the right direction, well, they might want to revisit their proximity to the 2018 election ballpark. Because they’re not just out of the city – they’re also out of the same state the election ballpark is located in….. Then again, the media know that.

Posted by Brock Townsend at Thursday, September 27, 2018 7 comments: Links to this post


Rep. Peter King (R-N.Y.) is calling for President Trump to "immediately" declassify government documents related to the Russia investigation, saying the records will show improprieties by the FBI and Department of Justice (DOJ).

“Absolutely he should declassify it immediately," King told Hill.TV on Wednesday. "I am not certain why he changed his mind last week, he said it involved allies. There could be some allies who are sensitive -- maybe some things were done within their territory -- but there is nothing there that would really hurt any foreign government.”


More @ The Hill
Posted by Brock Townsend at Thursday, September 27, 2018 2 comments: Links to this post

Posted by Brock Townsend at Thursday, September 27, 2018 4 comments: Links to this post

Posted by Brock Townsend at Thursday, September 27, 2018 2 comments: Links to this post

Facebook is currently doing everything in their power to protect CNN after they censored evidence that one of their producers, Scott Bronstein has been randomly calling people who used to attend school with Judge Brett Kavanaugh in an attempt to dig up dirt on the Supreme Court nominee that might be used to prevent his confirmation to the Supreme Court from taking place. Mark Zuckerberg’s social media platform took things a step further when they not only censored the evidence, but they deleted all media articles related to the evidence that was presented by Amy Dryden and banned Amy Dryden herself from the social media platform.


More @ Halsey News
Posted by Brock Townsend at Thursday, September 27, 2018 No comments: Links to this post

Brett Kavanaugh Rips Senate: ‘You Have Replaced ‘Advice and Consent’ with ‘Search and Destroy’ 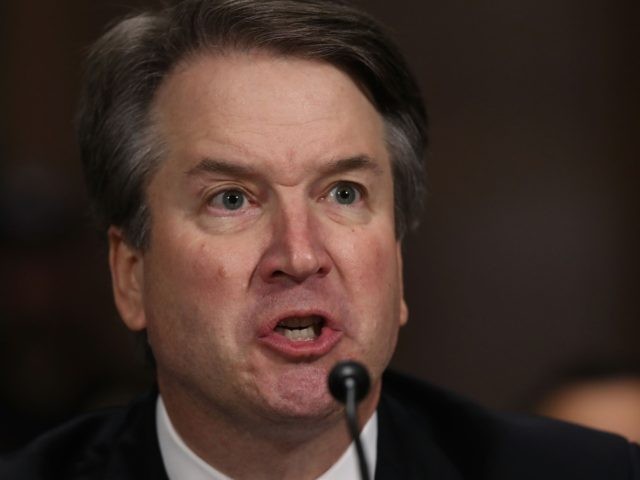 Brett Kavanaugh delivered a fiery opening statement to the Senate Judiciary Committee on Thursday afternoon, responding to accusations of sexual misconduct decades ago: “This confirmation process has become a national disgrace … You have replaced ‘advice and consent’ with ‘search and destroy.'”

Kavanaugh ripped the Senate — and, by implication, Senate Democrats — for  “false, last-minute smears designed to scare me and drive me out of the process before any hearing occurred.”

He read from a personal statement that he had appended to his prepared testimony, and written the day before.

In a searing indictment of the politicians before him, he mentioned some of the comments made by Democrats — including members of the committee — such as the claim by Sen. Cory Booker (D-NJ) that supporting Kavanaugh meant being “complicit in evil.” Others, he noted, said that “people will die if I am confirmed.”

The campaign to stop his confirmation, he said, had “destroyed my good name and my family” through a “calculated and orchestrated political hit.”

Whatever the reason, — whether fueled by “pent-up anger” over the election, or for other motives — he decried the damage done to him, to the Supreme Court, and to the country.

“Coordinated and well-funded effort to destroy my good name, and destroy my family, will not drive me out.”

“You may defeat me in the final vote, but you’ll never get me to quit. Never.”

Kavanaugh also repeated his denials about any and all allegations of sexual assault. He seemed to choke up when mentioning his mother, a judge who inspired him to become a judge. And he teared up and paused when stating that his ten-year-old daughter had told him that they should pray for Dr. Ford. ( Pray that she dies)

Posted by Brock Townsend at Thursday, September 27, 2018 6 comments: Links to this post

Juanita Broaddrick attended a rally in support of Kavanaugh outside the senate building where his hearing is taking place, slamming Democrats for entertaining Christine Blasey Ford’s decades-old allegations, but not her own.

Is This Any Way To Confirm a Supreme Court Justice?

Until two weeks ago, President Donald Trump’s nomination of Judge Brett Kavanaugh to a seat on the U.S. Supreme Court seemed a sure thing. He ably handled more than 1,200 questions put to him by members of the Senate Judiciary Committee. He demonstrated even to his adversaries a masterful command of constitutional jurisprudence. The FBI had completed six background investigations of Kavanaugh throughout his career in government, and it found no blemishes.

Trump promised that he would appoint federal judges and justices who generally share his views on life, guns and administrative regulations and who have a minimalistic view of federal power. When he announced the Kavanaugh nomination, it appeared he had found his man.

“If Kavanaugh had done any of what he’s accused of, the Clinton War Room would have destroyed him in 1998 when he was a top official in Ken Starr’s Whitewater Investigation.”

The Kavanaugh Hearings Are a Setup.

Democrats aim to make a universal point about sexual assault rather than find the truth of this case.

As the hearings were set to open, however, there was a development that could be significant. The Judiciary Committee spoke to two men who came forward to admit that they might be the ones at the center of Ford’s claim. If their claim is true, then it was not Kavanaugh and classmate Mark Judge who assaulted Ford — an idea speculated before now. (Ford also named P.J. Smyth and claimed a fourth classmate was there.) But if Sen. Lindsey Graham (R-SC) is correct, one of the men who came forward is “crazy as a loon” and “not reliable.” Ford says there’s “zero chance” of mistaken identity, but Kavanaugh, Judge, and Smyth deny under penalty of perjury that they know anything about the alleged incident.

More @ The Patriot Post
Posted by Brock Townsend at Thursday, September 27, 2018 No comments: Links to this post

Graham warns Dems: You better 'watch out' for your Supreme Court nominees

“And to my Republican colleagues, if you can ignore everything in this record, an allegation that’s 35 years old, that’s uncertain in time, place, date and no corroboration, if that’s enough for you, God help us all as Republicans,” Graham continued. “Because this happens to us, but this never happens to them.”


Sen. Lindsey Graham (R-S.C.) on Thursday warned Democrats to “watch out for your nominees” while expressing frustration with the allegations of sexual misconduct that have been levied against Supreme Court nominee Brett Kavanaugh.

“Well, let me put it this way to my Republican colleagues: if this becomes the new standard where you have an accusation for weeks, you drop it right before the hearing, you withhold from the committee a chance to do this in a professional timely fashion,” Graham said.

“When they say they’re going to do this is to delay the vote, get the Senate back in 2018 so they can fill the seat, I don’t want to publicly reward that kind of behavior. I think we’ve been very fair,” he continued, referencing Democrats' hope to win back control of the Senate in this year's midterm elections.


More @ The Hill
Posted by Brock Townsend at Thursday, September 27, 2018 2 comments: Links to this post

The Crucible of Kavanaugh

But first, some topical links

The assault on Kavanaugh is proving Trump voters right

The attempted political assassination of Brett Kavanaugh is bad for the country, but good for a Trumpian attitude toward American politics.

The last-minute ambush validates key assumptions of Trump’s supporters that fueled his rise and buttress him in office, no matter how rocky the ride has been or will become. At least three key premises have been underlined by tawdry events of the last couple of weeks.

Kavanaugh Accuser's Ex-Boyfriend: She's 'Not Credible At All' & The Huge, Glaring Problem With The 'Gang Rape' Allegations Against Kavanaugh

Kavanaugh Accuser's Ex-Boyfriend: She's 'Not Credible At All'

The Huge, Glaring Problem With The 'Gang Rape' Allegations Against  Kavanaugh
Posted by Brock Townsend at Thursday, September 27, 2018 No comments: Links to this post

Judiciary Talks With 2 Men Who Think They Assaulted Ford, Not Kavanaugh, Report Says

The Senate Judiciary Committee reportedly met with two men this week who think that they assaulted Christine Blasey Ford in 1982, not Supreme Court nominee Brett Kavanaugh.

Politico congressional reporter Burgess Everett reported the summary from the Judiciary Committee, which stated: "Committee staff have a second interview with a man who believes he, not Judge Kavanaugh, had the encounter with Dr. Ford in the summer of 1982 that is the basis of her allegation. He described his recollection of their interaction in some detail."


More @ The Daily Wire
Posted by Brock Townsend at Thursday, September 27, 2018 No comments: Links to this post